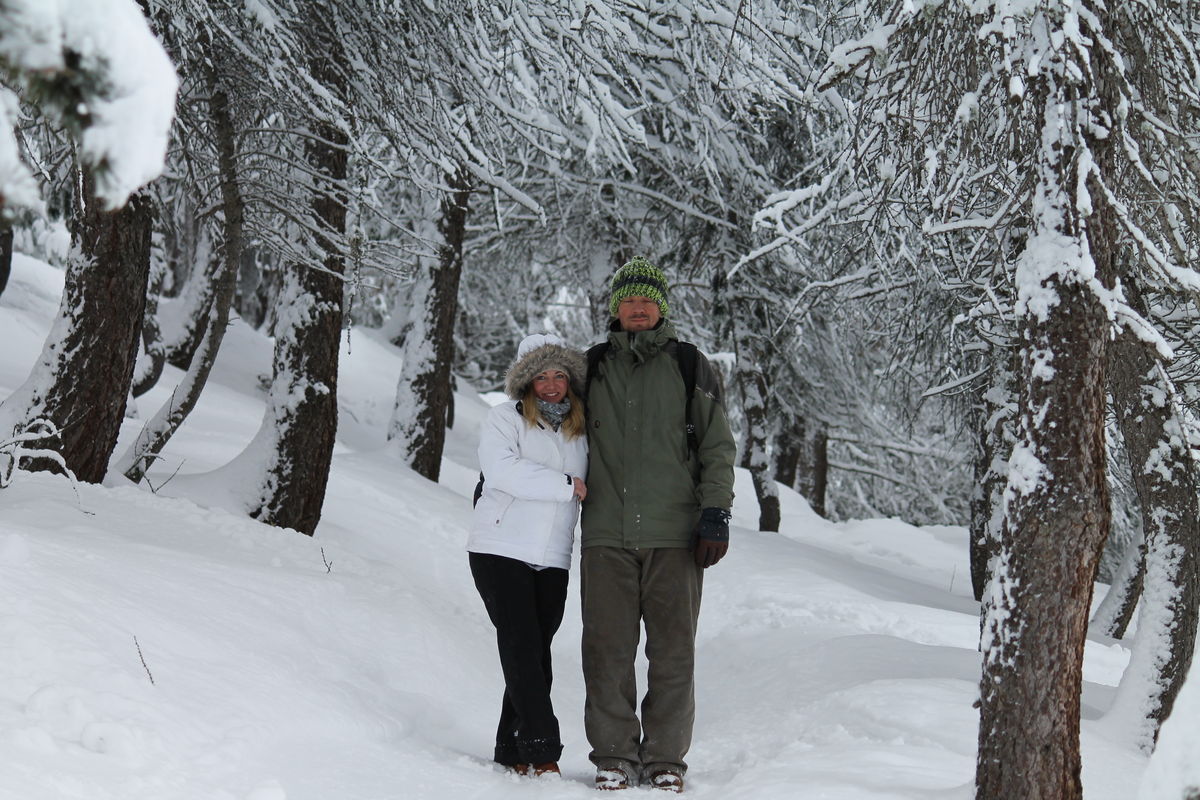 At the beginning of February my husband and I travelled with our girls to the French ski resort of Les Menuires, to spend the week on the fluffy white slopes with his parents and my brother and sister-in-law.

We’ve got this whole ‘active ski holiday with kids in tow’ thing off to a fine art now.  It originated with a great idea from hubbies parents a couple of years ago when they first suggested a skiing holiday.  Basically, they drive to the selected ski resort a week or so prior to us arriving; they ski, dine out and sightsee to their hearts content; we then head out and join them for the week (they babysit whilst we ski); they then stay on for the week or so after we’ve left and ski again. 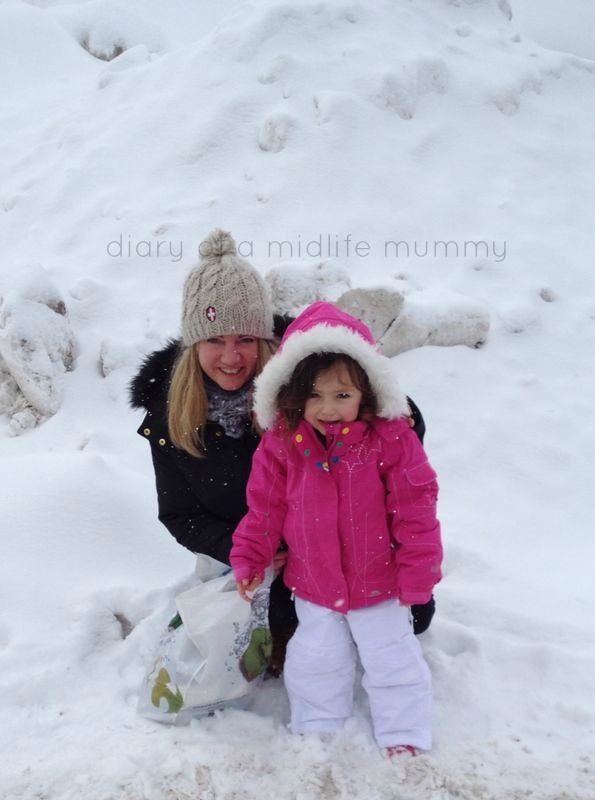 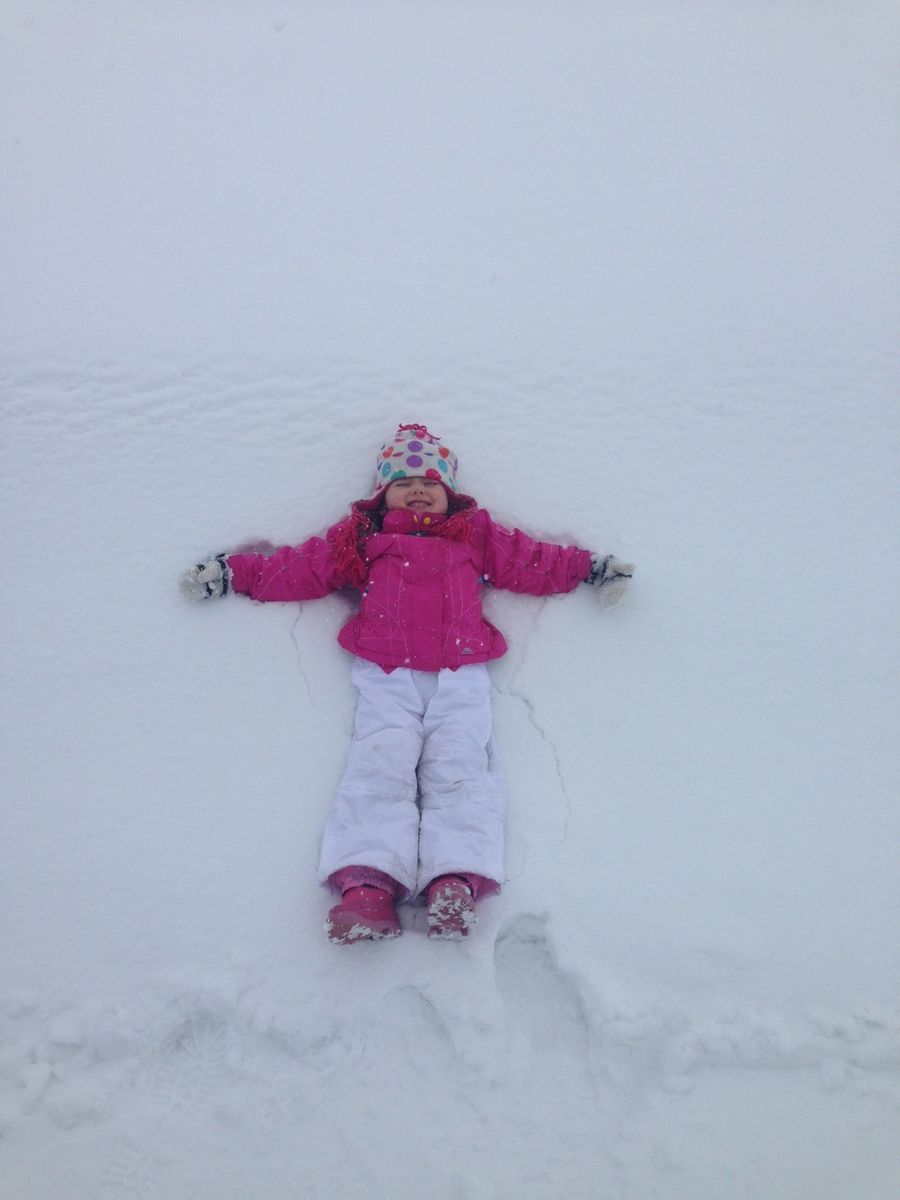 Yes I know, we are very lucky to have this option available to us.  I can’t imagine how hard it would be to go as a young family of four, as surely one would have to stay with the kids whilst the other skied?!  Unless of course you pay for childminding/nannies etc, but how expensive would that be? Like I say – we are very lucky as otherwise this type of holiday would be totally out of the question for us.

The travelling worked out well with the girls. We flew to Geneva which was a lovely short flight of only 1 1/2 hours; especially if compared to the last flight we took when we flew to South Africa for a wedding in December! (But that’s another post!!). We’d then arranged for a transfer mini bus (for our family of four, plus my brother & sister-in-law) to meet us at the airport and take us up the mountain to the chalet.

Ok, so it was a little ‘bitty’, but it was almost as if the different locations (car, airport, plane, minibus) were keeping the girls occupied; as we were always on the go with very little unnecessary waiting around. Plus of course H had her mad Aunty and Uncle to play with her which is always fun.

The bus journey worked out well too for the fact that we had brought along our own car seats, so both the girls were safe, comfortable and fast asleep for much of the bus transfer.

We arrived at the chalet around 6pm, all rather shattered, to be greeted by hubbies parents who had prepared a lovely hot, cooked dinner to welcome us and warm us up from the icy cold weather outside. 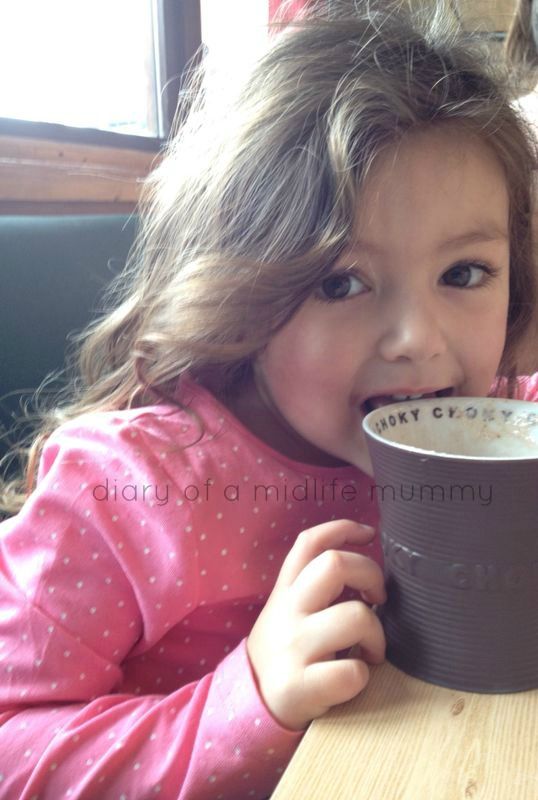 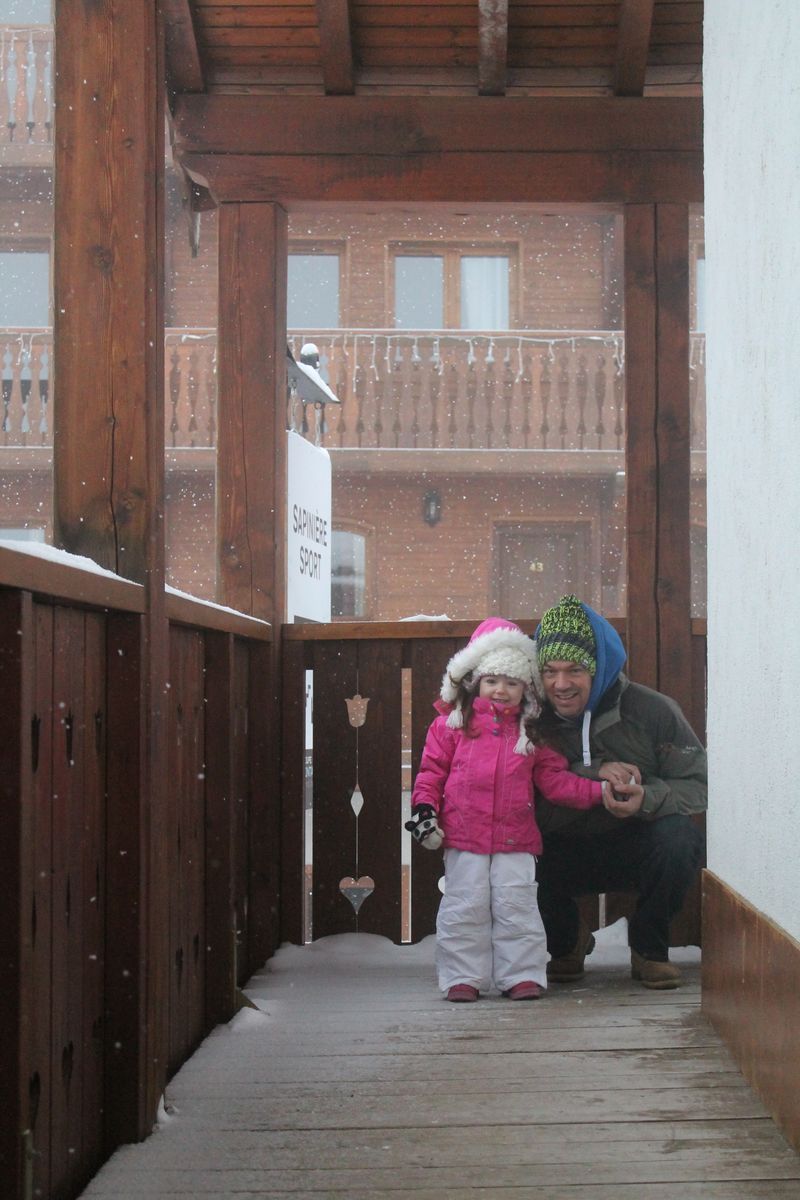 I was naughty and skipped the first day of ski school the following day, and opted instead to have a lazy morning.  I just knew that organising ski school for Holly and I (separate schools!! I know I’m not that great, but give me some credit!!), boot and ski hire, lift passes etc was going to take a while, and I really couldn’t be bothered to stress about getting it all done and sorted by 9.00am in the morning!!  It just wasn’t going to happen!!  So, after a relaxed lunch, Mr B, his brother, my sister in law and I, all took to the slopes for a more active afternoon, plus personally to see if I could remember what to do!!!!

Mr Band his brother both learnt to ski from four years old, so are obviously very competent.  They go off each morning only to meet their wives from ski school and regale stories about how they’ve popped from one resort to the next all at break neck speed!!  I’ve been skiing a couple of times now so am in the intermediate lessons, while my sister in law has skied the least, so is still in the beginner classes. It’s a bit of a shame that we get split up from our husbands for the mornings, but hey! And it’s such a drag each day to have to ‘wake up for’ and ‘get dropped off at’ school!!!!  I really thought those days were long gone!! 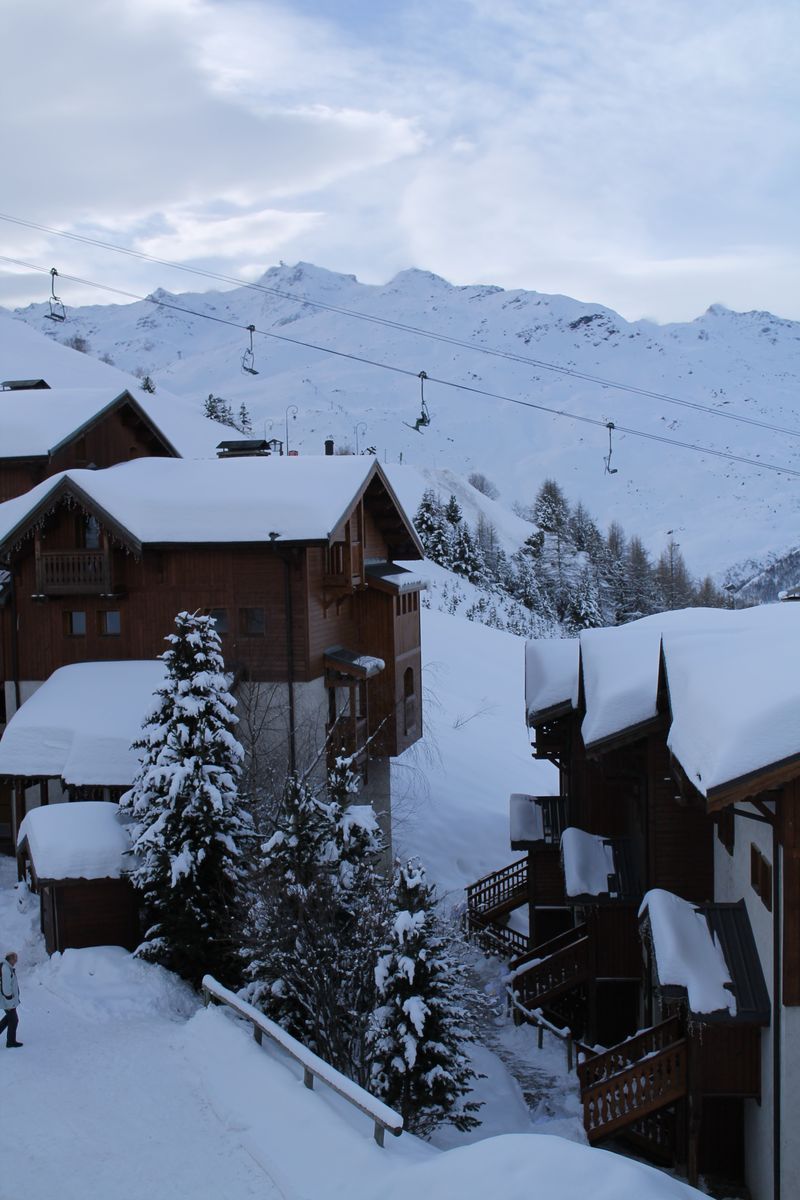 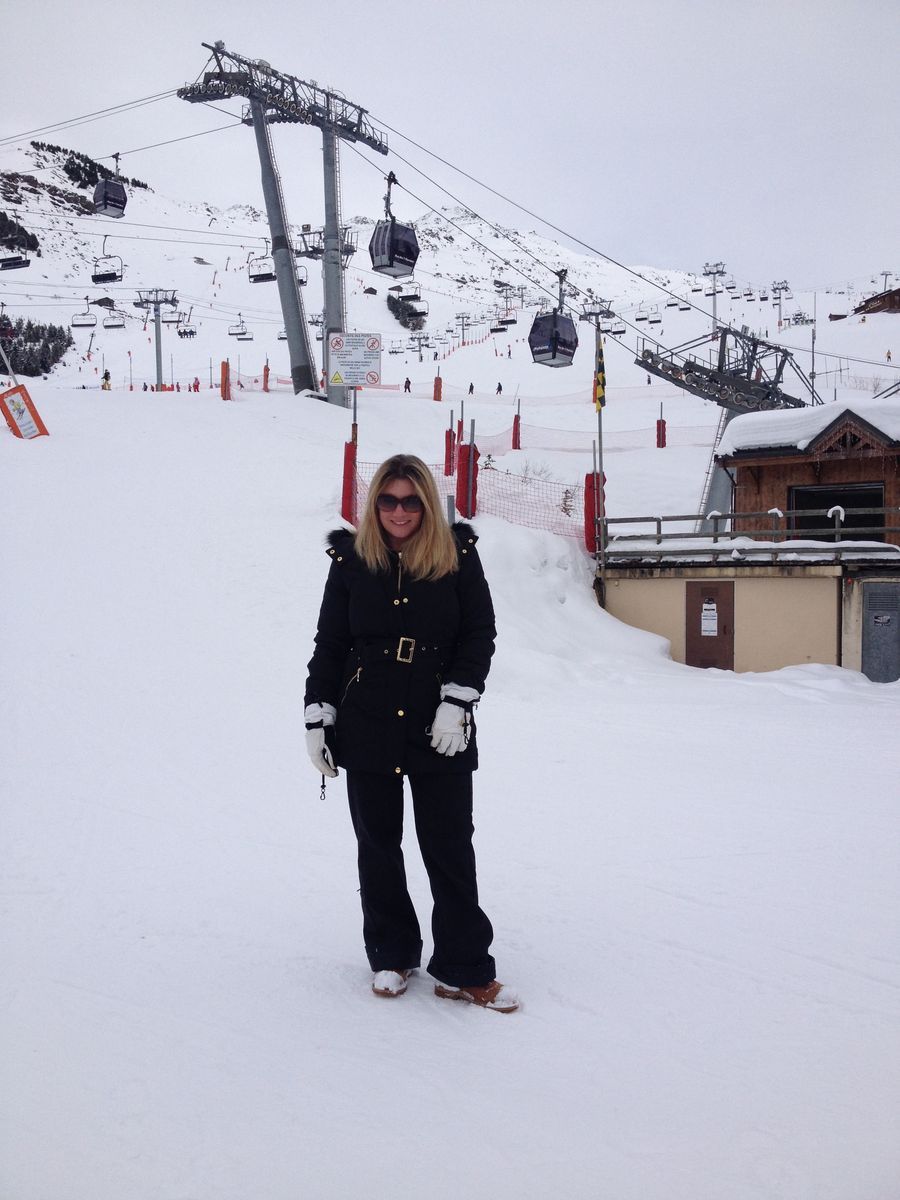 We also organised for H to start at baby ski school this year , the French Club Piou Piou!

She attended each day like a real trouper. Even on the ‘white out’ day that my sister-in-law and I chickened out of!!!

The facilities were excellent, with hubbies parents commenting that this was the best children’s club they’d seen in a resort before – and believe me, they’ve been to a few!!!

H did very well and we had a very proud parent moment at the end of the week when she was awarded a certificate and medal for completing the week. The instructor did say to us to perhaps explain to her a little more about what it is she’s being asked to do, but really, how on earth do you explain to a three year old that she’s going to be dropped at a snow covered field, full of little classmates she can’t speak to as she doesn’t speak their language, to be told to stand on two fibreglass/metal (??) planks which you are to ride on down a hill???!!!

With a couple of word replacements that description might just do it!! 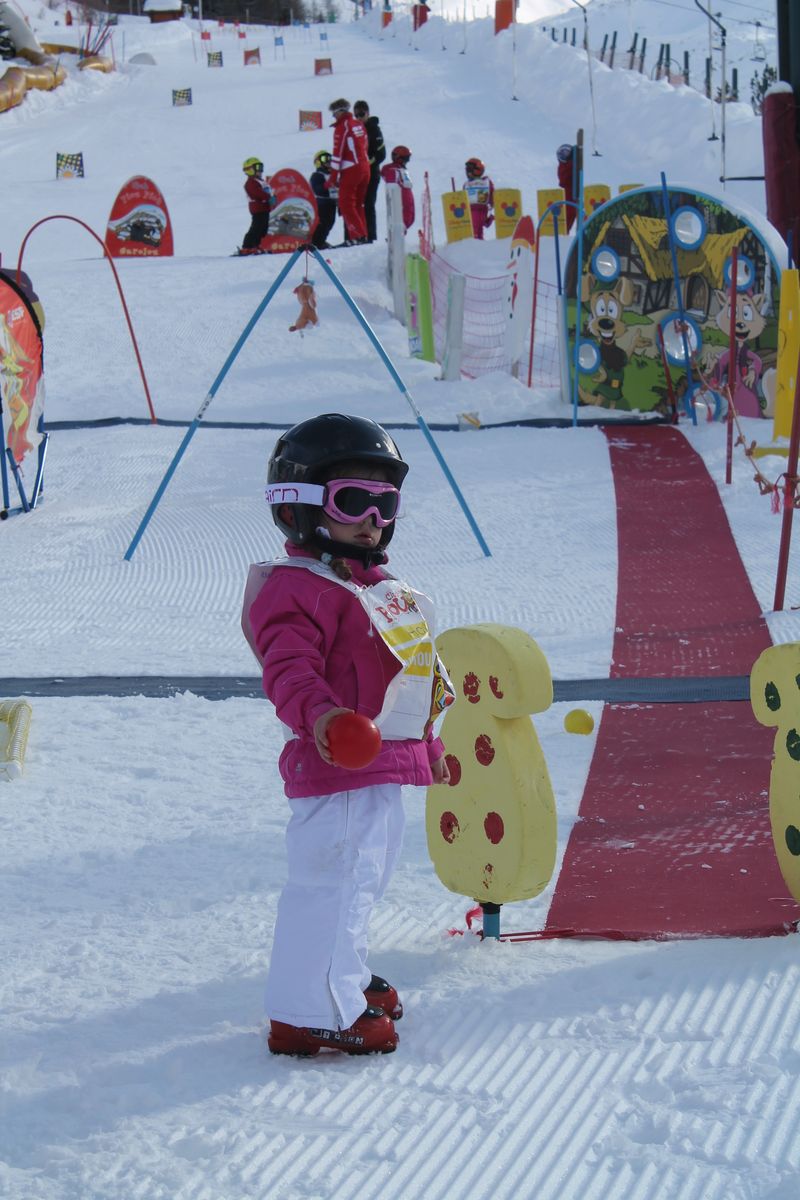 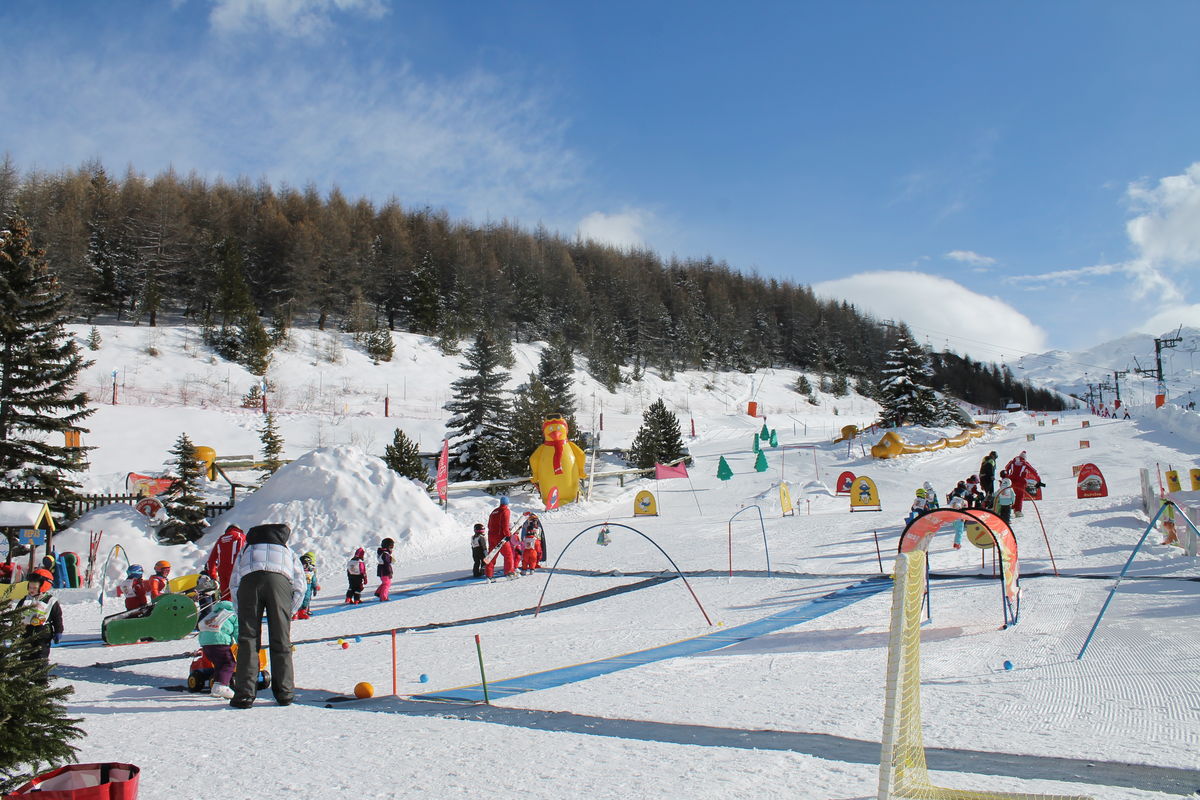 So, our chalet was self catering, where we all agreed to keep receipts for any food shopping and just split it three ways at the end of the week. We also took our turns to prepare and cook the evening meal, unless of course we chose to eat out that evening.

Again, lunchtimes were either a selection of meats, breads etc in the chalet or a meal out at a restaurant we had all agreed to meet at. Generally, one that was close by or easy to get to with children, so no, not one of the ones you find in the middle of nowhere, half way down a red run!

We would often sit outside of the restaurant cafe bar at the bottom of the slope to meet up, talk about the mornings events and sip on hot chocolate, vin chaud or panache, whilst watching the world go by. Always of course made that little bit more interesting when spectating the odd crash or wipe out!!

This year my brother in law had brought along his new toy. A Go-Pro. Which I must say is a rather nifty little bit of kit! He and hubbie took this along with them on their daily expeditions to take footage of how amazing they are!! (Yawn!!) I jest!! They are very good, and it was great to see where they’d been each day, when we all snuggled down on the cosy sofas in the the evening to watch the movies that had just been edited together. 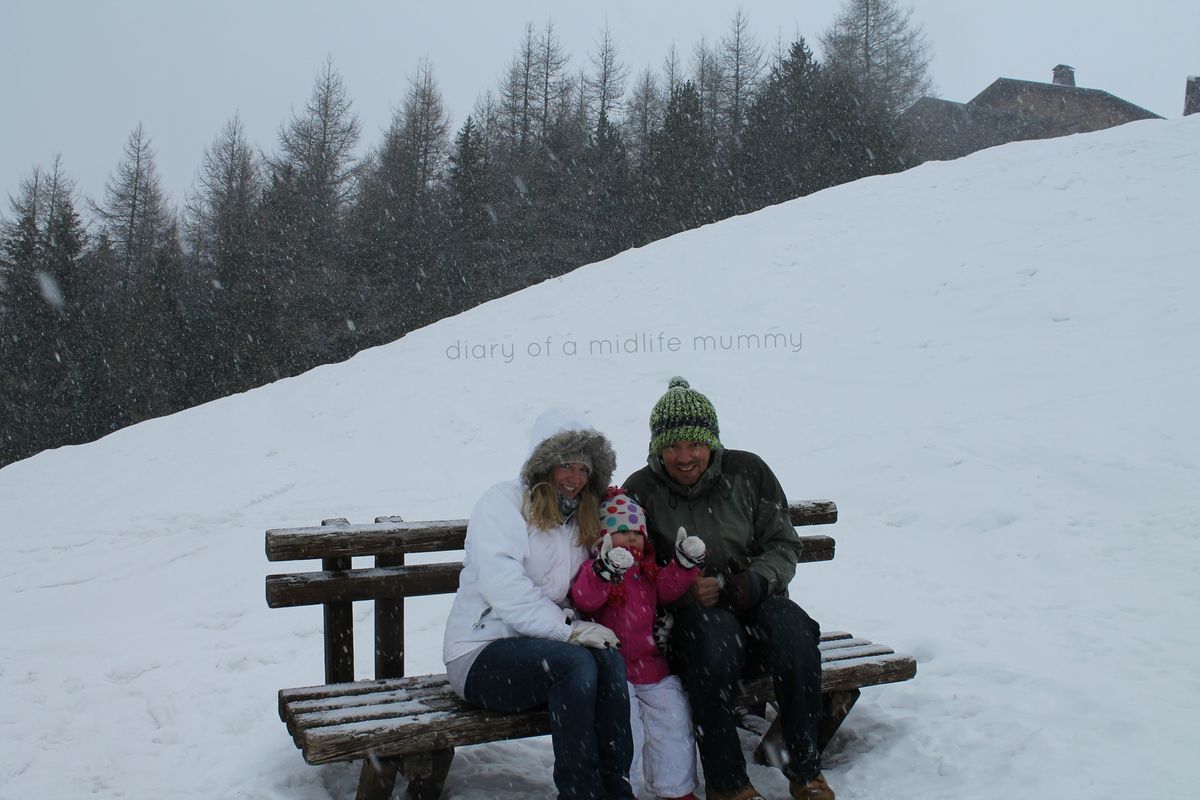 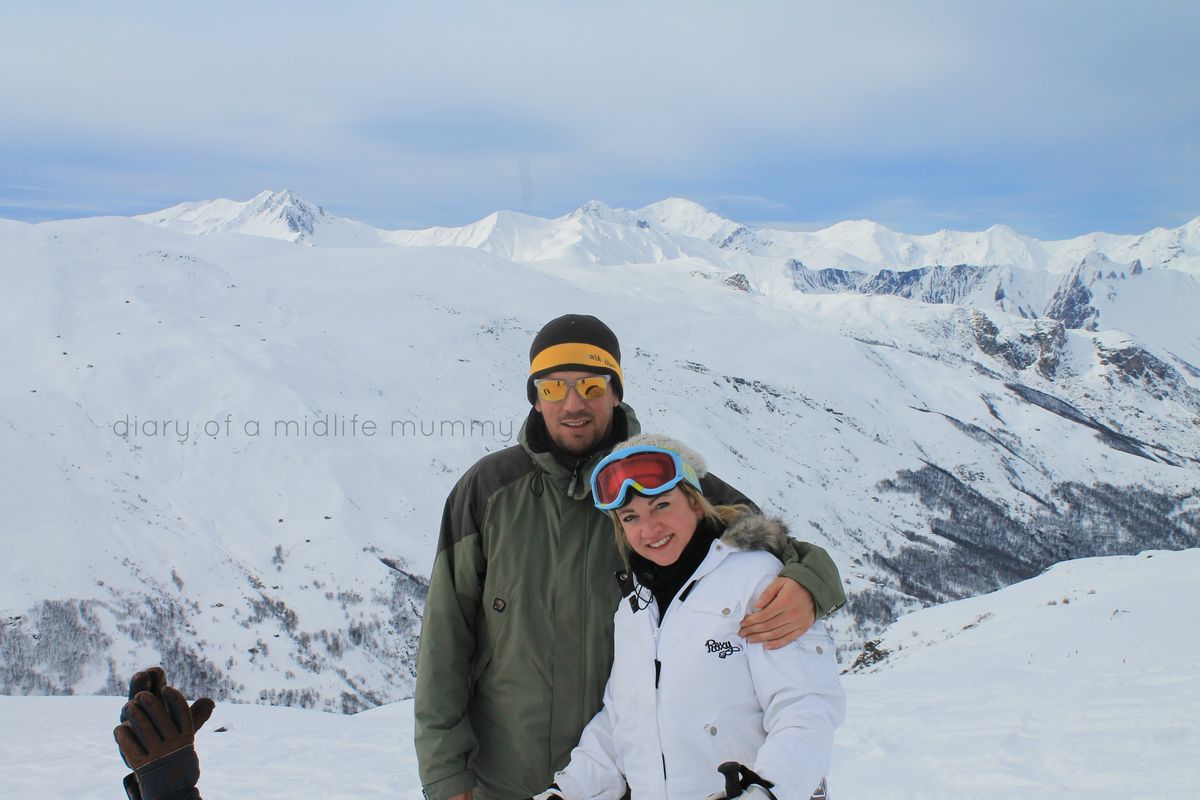 Now I’m not sure whether it was the fact I was on holiday, the altitude, the physical activity or just having to look after a 3 year old and a ten month old, but I was knackered each evening.

Actually, we all were!

So much so that I’m not sure anyone really made it to ten o clock the entire holiday!!! I’m also no good at hangovers, so the thought of too much alcohol whilst on baby night shift, plus school in the morning – all added up to plenty of early nights!!! 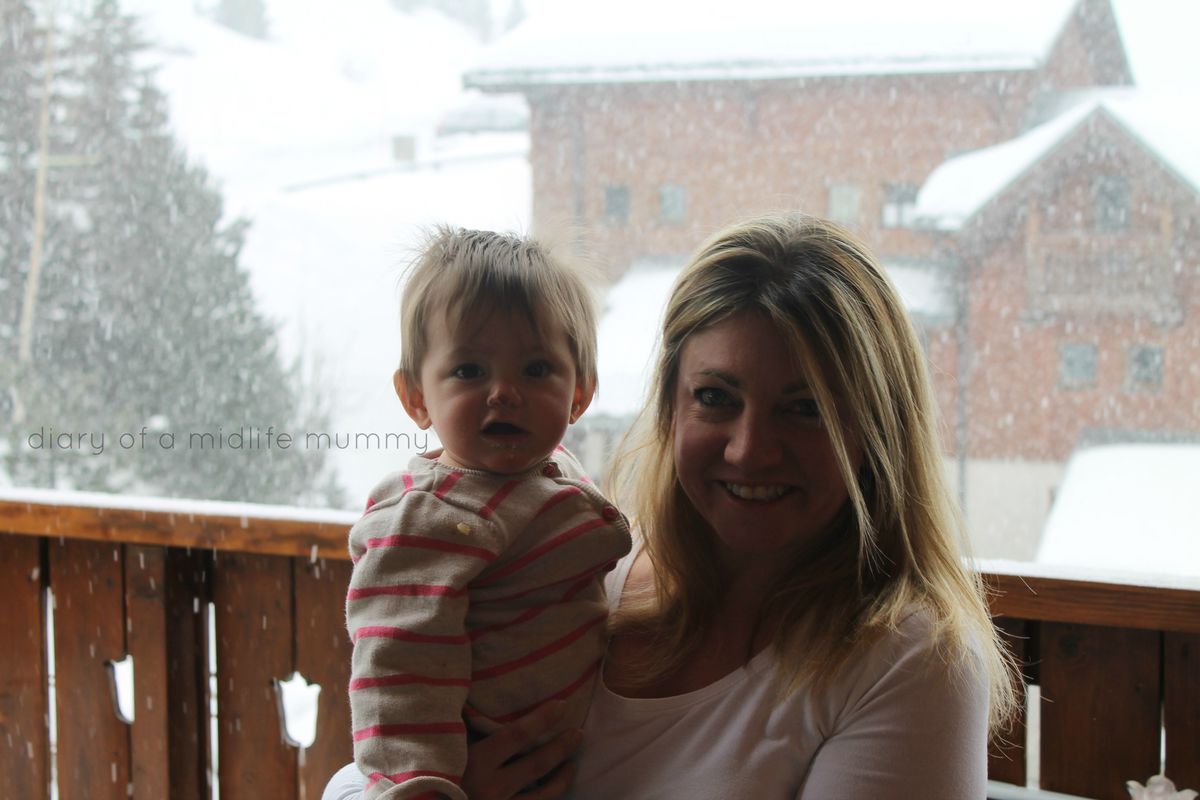 I was pleased with my skiing for the week and happy at the progress I had made as I achieved the steepest red I’ve ever done.  Ok, so there were a few ‘bleeps’ thrown in along the way, but I still made it.  And when I told hubbie where I’d skied he was in shock that I’d actually managed it, as even he thought it was a tough run.   I’m pretty sure I can ski quite well now, but my problem is pushing myself through the invisible barrier to the next level and go faster! Perhaps next time I go I will have to book in for a onto one session to see if they can help me through my fear!!

The week flew by quickly with only minor injuries of bumps, bruises and in some cases, pride!

We’re already thinking of two more ski breaks for 2015. The first, a long weekend with my sister and her husband (no kids), and the other a big family number again perhaps to Morzine.

So any suggestions for great family skiing and activities are more than welcome.