So it finally arrived.

The day that for some reason so many mums and dads utterly dread.

Ok – so dread is probably too strong a word to use. instead perhaps I should say that we approach it with anxiety and trepidation. It really is a whole mixture of emotions all rolled into one.

To begin with I felt a great sadness when Holly left her little pre-school. She had been there since almost the beginning once I’d returned to work and they have looked after her for these past three years. They knew pretty much everything about her; her character, her likes and dislikes, her behaviours, just as we do as her parents. I especially loved that when we turned up at the end of each day to pick her we were able to stay a while and chat to the staff about what she’d been getting to up to.

I’ve heard this is now unfortunately going to be a thing of the past really. I’ve heard that each day as we go to collect our little girl that they will just come running outside of their school room (under supervision of course), but that the teachers do not generally stop and chat to each of the children’s parents. Obviously though, when you think about this, of course it couldn’t be the case.

At pre school the children are picked up in dribs and drabs, but with school, come 3 o’clock, the doors fly open and the kids all go home at once! So of course the teaching staff won’t be able to discuss each childs day with their parents!

So, I suppose this is just one of the new things I’m going to have to get used to, and just keep my fingers crossed that everythings ok. Although as a parent, that’s tough isn’t it, as you want to know everything about your little ones, especially as to how they’re settling into their new and potentially very scary and daunting environment, with having so many new faces to get to know, new processes to follow, new rules to adhere to and new friends to make along the way! 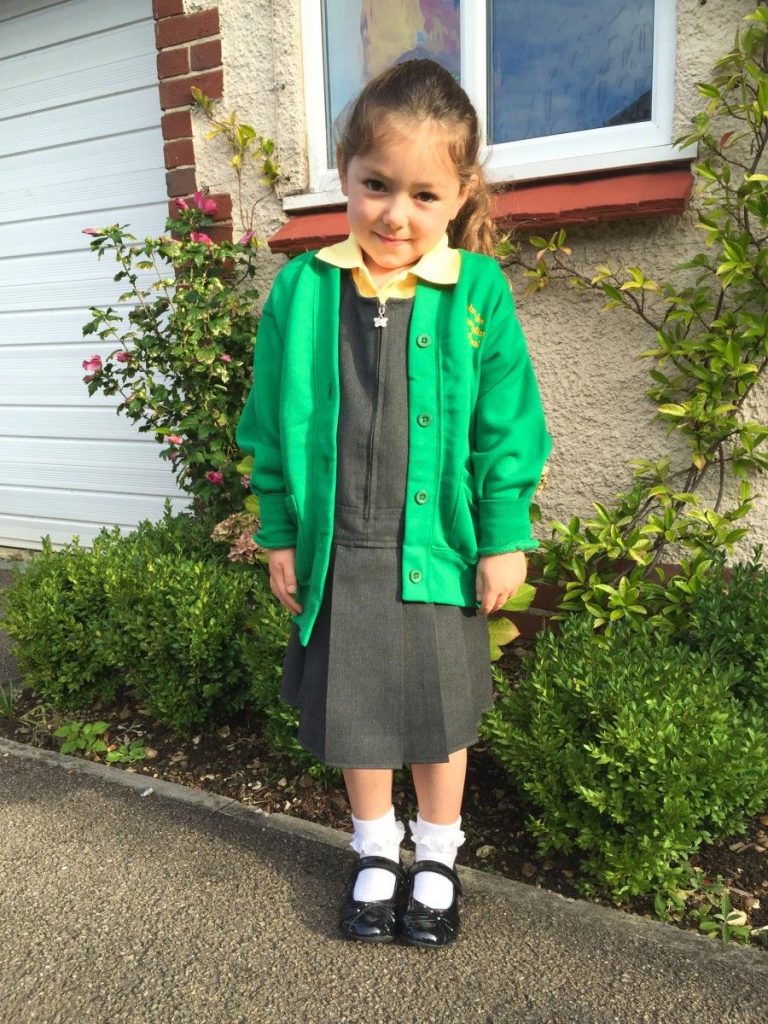 Over the past few months, in the run up to this day, we’ve tried our hardest to have as much organised as we could. We made sure all her uniform was ordered in time, bought the name labels, had her feet all re-measured up for the correct fitting school shoes etc. Yet with many a good plan, there always seems to be something which sort of slips through the net isn’t there! Our big flaw was that ok we’d ordered all the necessary uniform, but we didn’t actually try it on her until a couple of weeks ago. Some of it fitted perfectly, but the rest absolutely drowned her! She takes after her mummy you see, and as a result I’m p[retty certain will never be Amazonian tall or anything, so our eagerness to get our moneys worth by ordering age 5-6 and planning a little for the future (after all – she will in fact actually be 5 in October!), was well and truly thwarted. 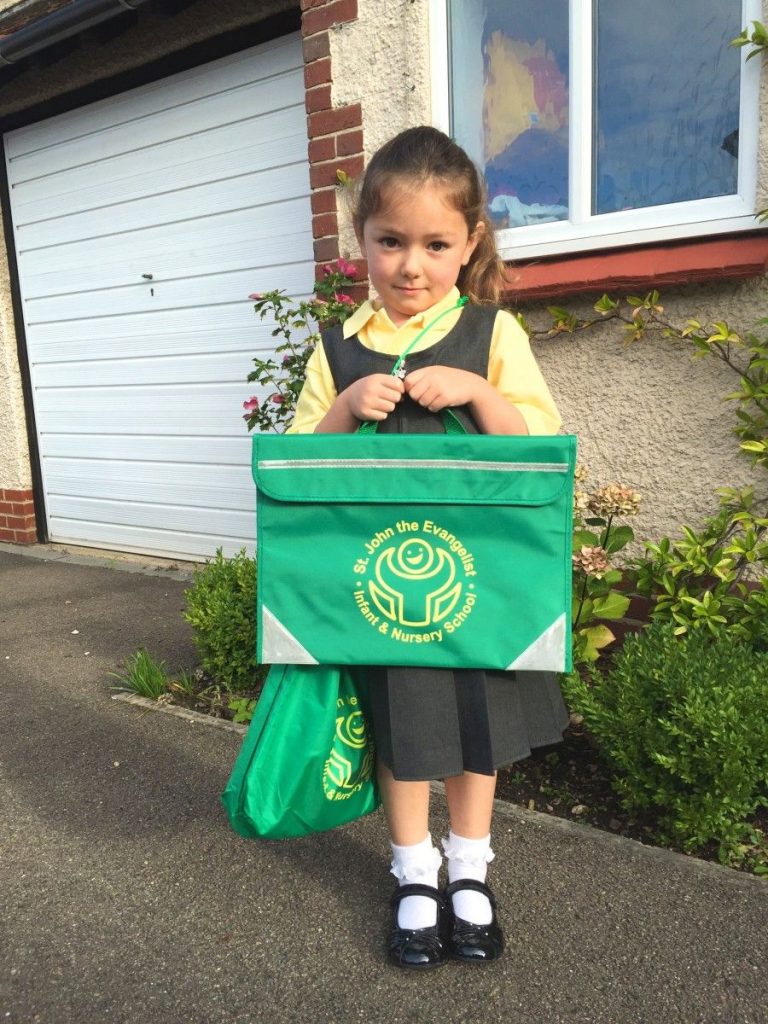 Yesterday morning, the day itself, Holly was so beyond excited.

Rather than lounging around in bed, playing with her little sister or watching cartoons, she bounded out of bed and eagerly requested to put her uniform on. I was in two minds to have her change into this after breakfast, just in case of any spilages or accidents, but she was too keen so I just wrapped her in a tea towel for the table instead.

Then she was desperate to put on her new shoes. Ok so we may have made a bit of an error in that we bought patent. She was too happy and persuasive in the shoe store though, and I just wanted to make this whole experience as wonderful and exciting as possible for her, so I’m afraid I just went with it. We’ll see how long they last! And no doubt I’ll realise the error of my judgement! 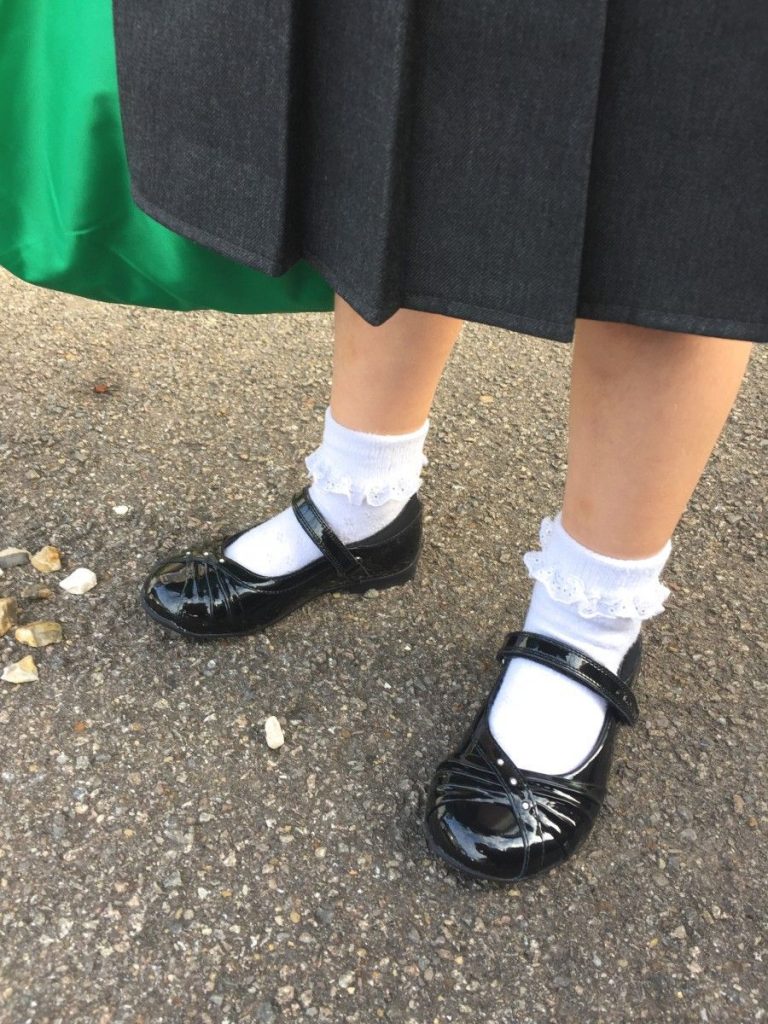 Ever the keen and proud mum that I am, before we left for the school I had to take just a few shots of Holly in her new uniform, so I merrily snapped away until I could see she had totally lost interest.

Then it was time to go – we were actually en route yesterday morning to take Ella back to the hospital to get her leg cast off, which was fortunate in some ways, as it meant both Mikey and I were off work that morning and were able to then both go with Holly to drop her in at her first day. Which was lovely.

As we walked in through the school gates, it was just so heartwarming to see so many little people walking along in their sparkly new and oversized uniforms, attached to parents each with beaming smiles keen to make eye contact with other new parents along the way.

We bumped into Holly’s friends from her old pre-school. It had worked out rather nicely as although there weren’t many of them going to this school. Those that were, had been put into the same class. So it made me feel a little more at ease that she already had some friendly faces to sit with.

After a few more obligatory photos, the side gates opened at precisely 9 o’clock and we nervously escorted our children along to their allocated rooms.

Then, with only a blink of an eye, they were gone! They were in.

I gave one of the other mothers a big ‘we did it’ hug! Though I think it was me who was the more emotional of the two of us!

So, with a heavy sigh of relief, sadness and pride, we left the school and just hoped that Holly would have a lovely time. 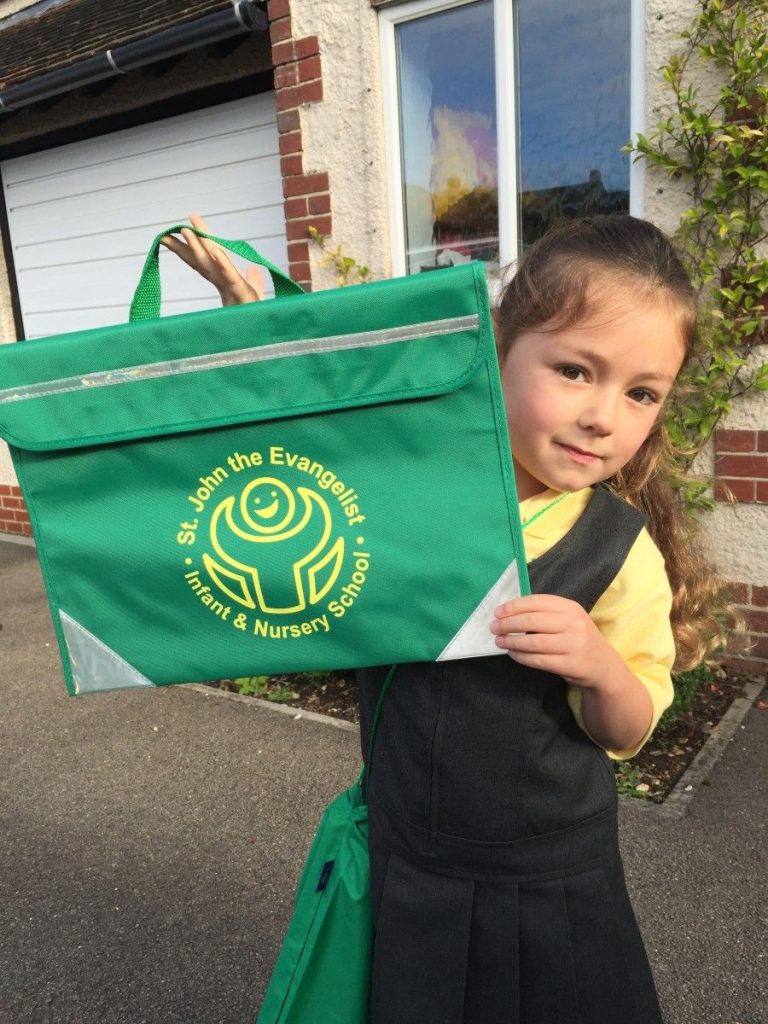 Her first day was only a short one. actually she is on short days each day this week. with the full days beginning on Monday next week. I walked over to meet her her on my own. It was only around the corner from my house which is amazingly convenient and was such a warm and sunny, and there was a distinct spring in my step as I walked along the pavement. I was one of those mummies now. The ones I’ve always watched or driven past. I was part of the school pick up elite. Albeit only for a day or two!

At the school I waited proudly for Holly to come out, chatting openly to other mummies and daddies as I’m so keen to get to know as many as I can and look as friendly as possible. In hindsight I probably looked a bit of an idiot! But hey, there’s always tomorrow!

Once the teacher knew I was there, Holly came bounding out of her classroom with a huge grin on her face, proudly swinging her book bag at me and instructing me to look inside. I was rather excited and thought it might be a fabulous new book, her first big school drawing, or even her first homework assignment, but no – it was a note to hubby and I that the school administrators were still waiting to see her birth certificate! Oops! Strike one on first day! Not a great start!

As a treat on the way home, to make it more of an occasion and to show her how pleased I was of her, I surprised her by saying that we would walk the little loop home past the local Post Office, where she could choose some sweets.

It was lovely as we walked together. me holding on to her book bag, albeit practically empty, her skipping alongside of me and chatting animatedly about her first half day.

i can’t quite describe the feeling I had as we left the Post Office and continued on our little walk home. I was so utterly proud of my little girl. I felt so happy and privileged to be with her, walking alongside her on her first big day. I know that I won’t be able to do this for the most part, as I work full time and this fills me with dreadful sadness, so just for that exact moment it was wonderful.

A truly special moment in time spent with my little girl.

A precious memory to treasure and keep. 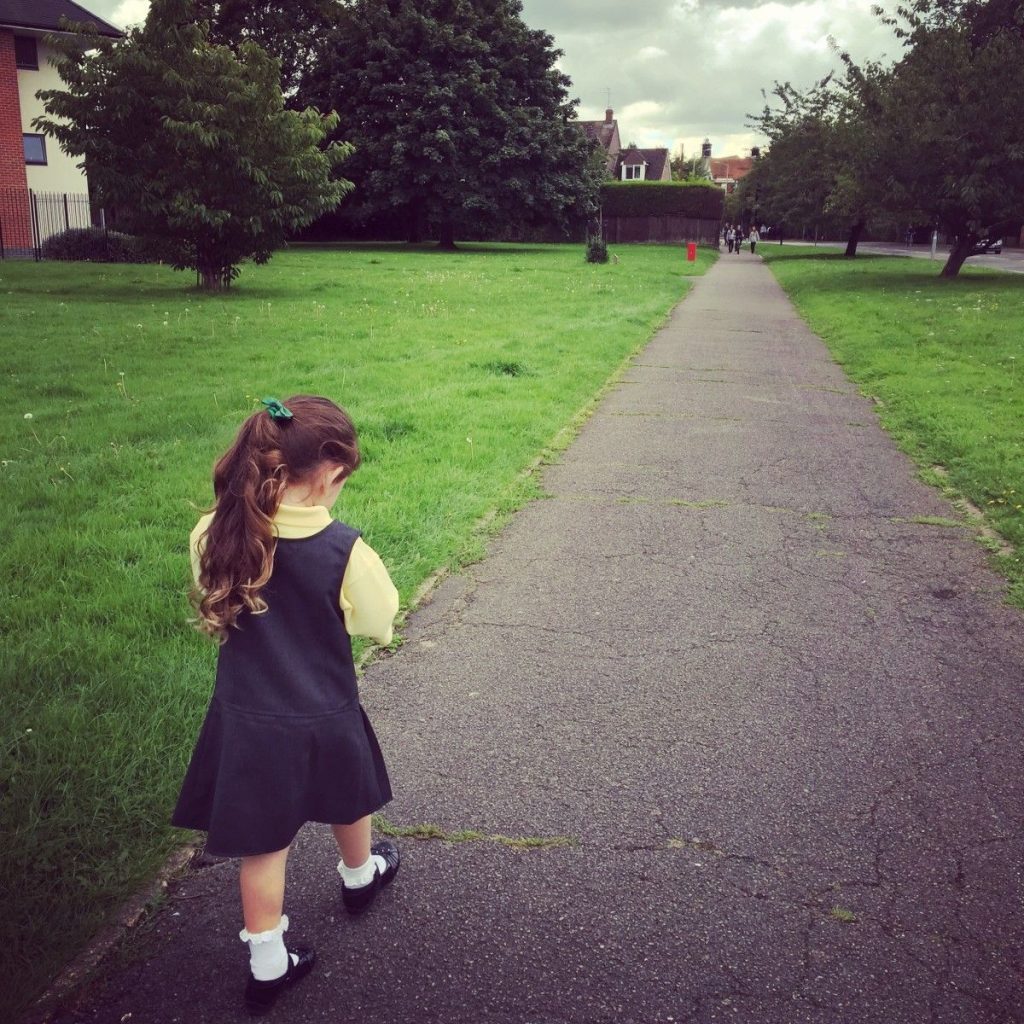