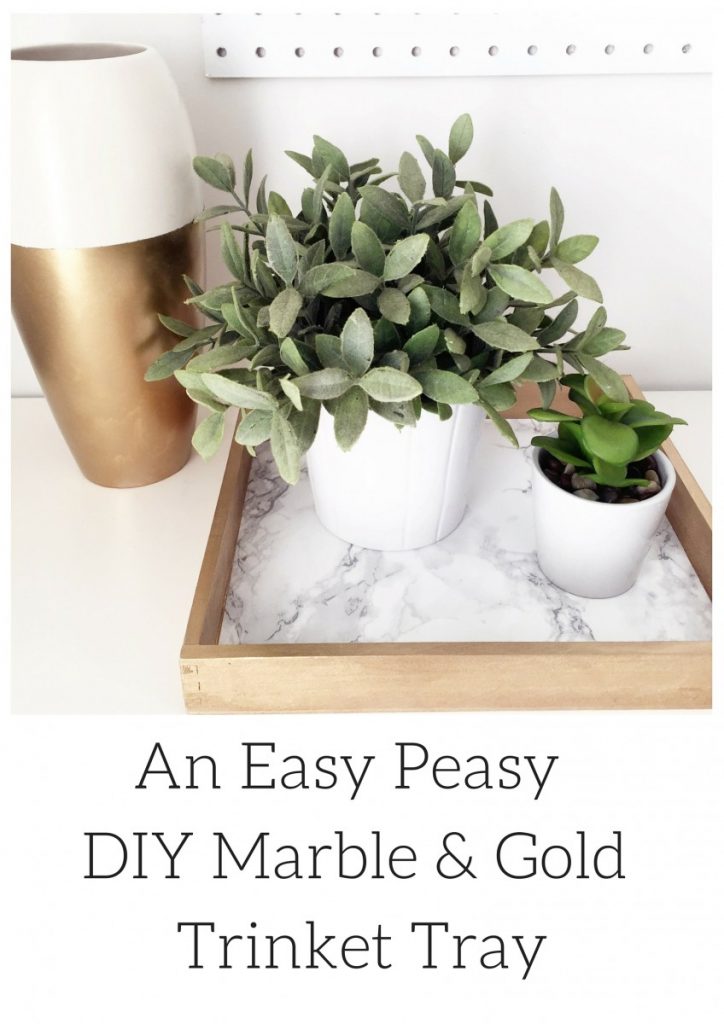 I was busily binning items the other day as I tried desperately to sort out the make-shift play room – one of my pet hates, as you might well know – when I happened upon a small wooden toy tray which the kids had discarded.

It was one of those ones where the wooden toys came packaged in the tray, but had a cellophane wrapper rather than a lid, so although you could store the play parts back in the box, it was far to likely they’d just be tipped out all over the floor again.

So, I’ve since moved the little toys to a handy tuppaware box with a lid, just to keep them nice and tidy.

I looked at the little wooden tray for a moment and thought I might be able to use it for something else.

And then, for the first time ever, I had a bit of a ‘Blue Peter’ moment and decided it was time to get crafty!

If you know me well, this doesn’t happen often, so I embraced the moment and knew exactly what I wanted to make.

It was going to be my new makeup/jewellery trinket tray.

And I already knew how I wanted it to look.

So, over that next week I bought in or ordered the items I required to make my masterpiece.

From Amazon I ordered some marble effect contact paper, and I picked up some gold metallic spray paint in a local store. This was all I required, so I set to work.

The first thing I did was to measure out the required amount of contact paper to line the tray.

Contact paper comes with gridlines on the reverse, so this was pretty easy to do. But I did use a ruler as a bit of an added help, where the grid lines had been replaced with words. Then I just cut out the area required according to the marked lines.

This was then set aside until later.

Next it was time to spray the tray. Something I was particularly excited about! Being a non-crafter, I haven’t had much opportunity to do this, so it was hard not to start spraying everything in sight as it was so much fun!

It was also ever so quick and easy.

I made sure I had covered a surface in a protective sheet (you could use old newspaper, a child’s messy mat etc) and then set the tray down. I used the spray according to the instructions on the side of the can, which now off the top of my head and thinking back, was to spray as evenly and steadily as possible from a certain distance away. This I suppose was easier said than done, as you obviously have to move the can to get into all the areas you need to cover, but it seemed to work. Some areas looked as though they had drips where I’d sprayed a little too much or a little closely, but once dried, I found this wasn’t noticeable.

Once the top of the tray had dried, I turned it over and sprayed the bottom and checked to see if everywhere had adequate coverage.

After the tray had dried, it was time to add the contact paper.

I made sure to line it up with the base of the tray, and carefully just peeled back a small section of the contact paper protective backing.

I did find it tended to bubble quite a lot if I went too fast, so I found slow and steady was best. I inched back the backing paper slowly as I stuck down the top to the base of the tray, making sure to push out any bubbling which did appear.

Then, that was it!

My new gold and marble trinket tray was ready!

I then decided I wanted to try and spray a vase too. Ideally my vase would have been pure white, but I made do with a cream one I had lying about the house.

I marked on the vase where I wanted the paint by sectioning off some of it with Frog Tape and paper.

Then, it was time to spray again.

I am absolutely in love with my little tray, and it has already been a really handy addition to my dressing table.

So, for the price of just a spray can and some paper, it’s such a quick and easy way to repurpose old or unwanted items around the house, and give them a whole new lease of life.

The only thing I’m looking out for now is some of those sticky clear rubber dots which can be added under the tray as non-slip feet. If anyone knows where I can pick those up I’d be very grateful indeed.

So, I’m not saying this is a full on masterpiece or anything like that, as I’m pretty sure it’s not, and there’s certainly room for improvement, but coming from a pretty non-creative type, the type that usually just goes out and buys things like this, for once I’ve actually made the most of something I already had.

It’s something I can call my own and be proud of.

And anyway, everyone has to start somewhere don’t they?? 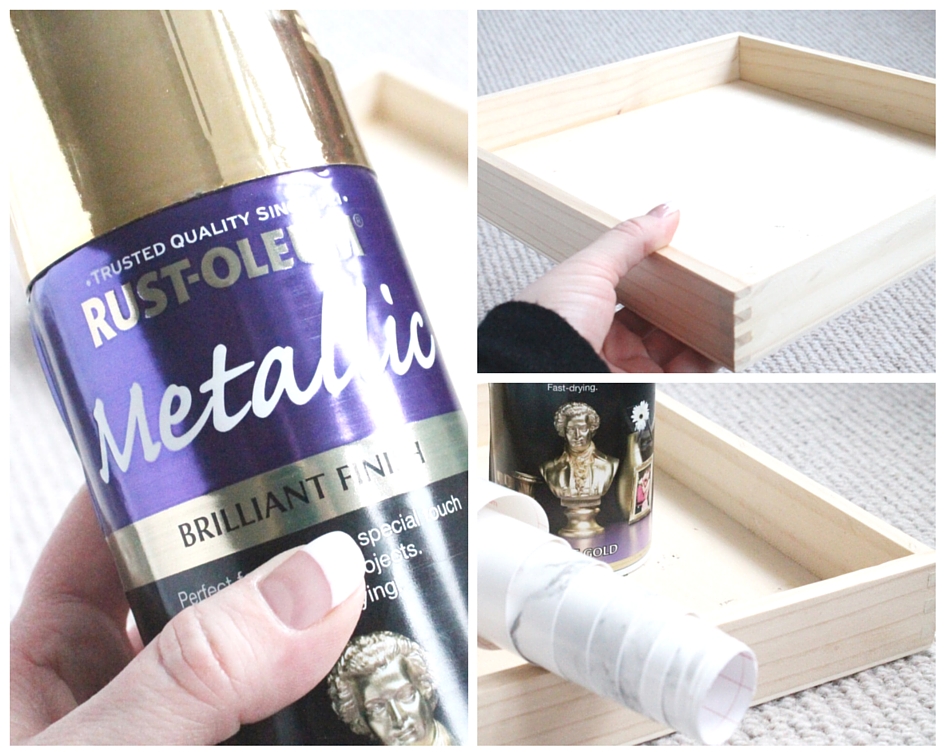 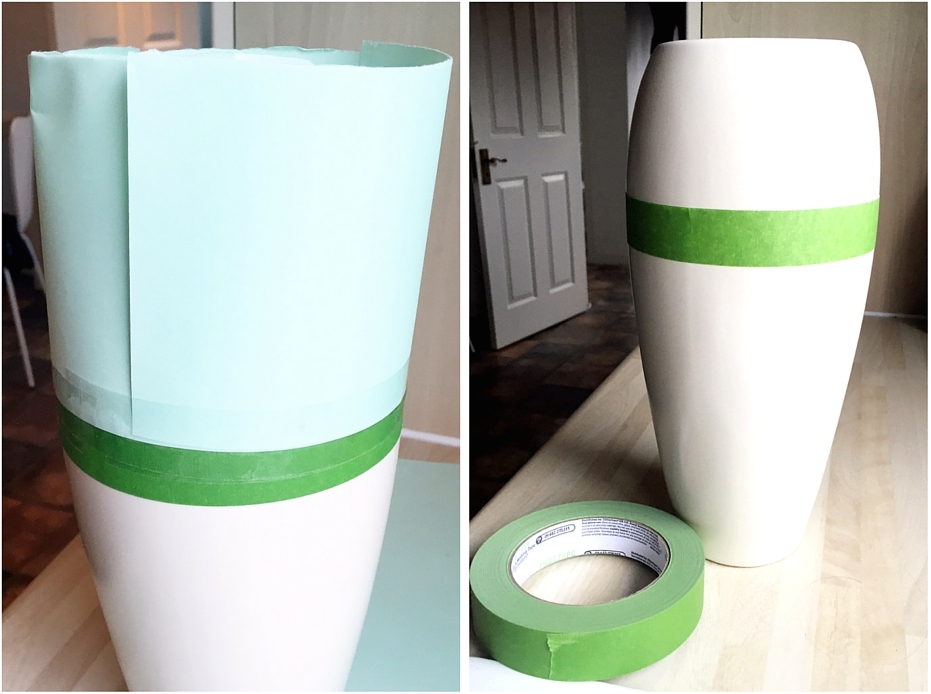 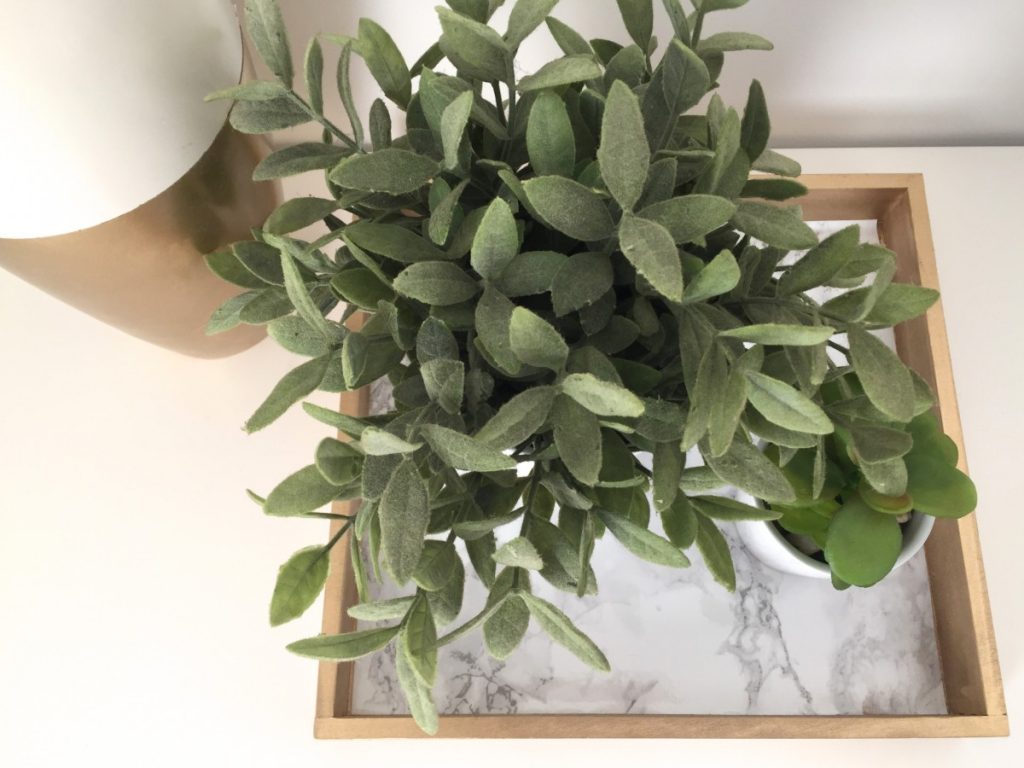 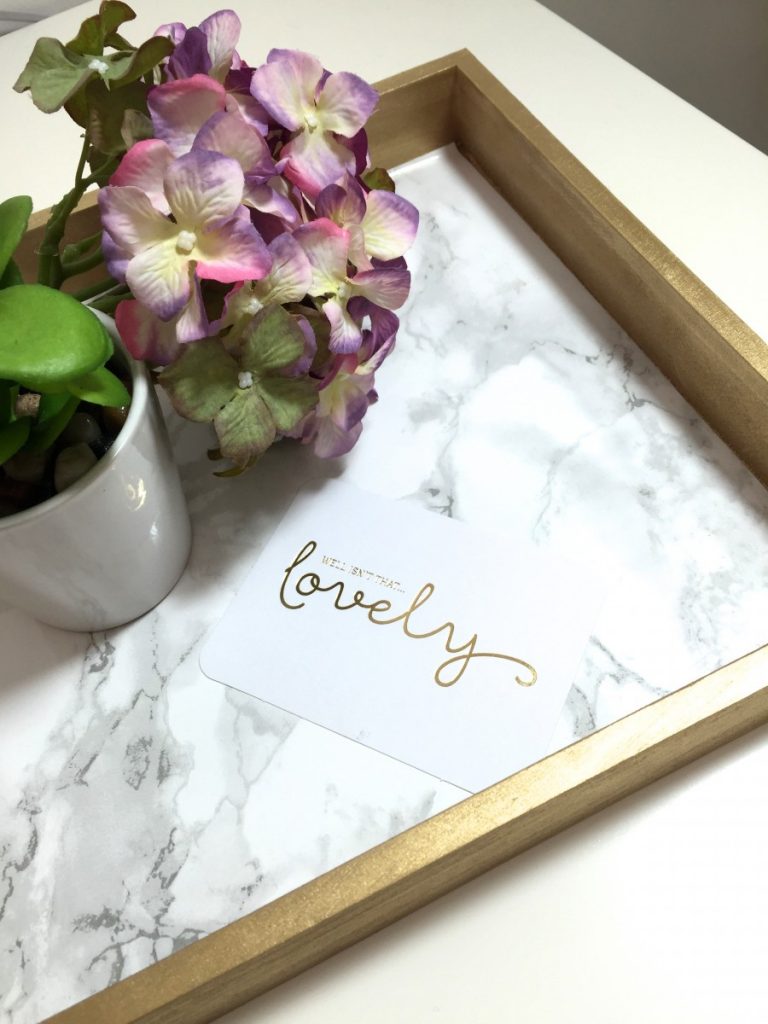 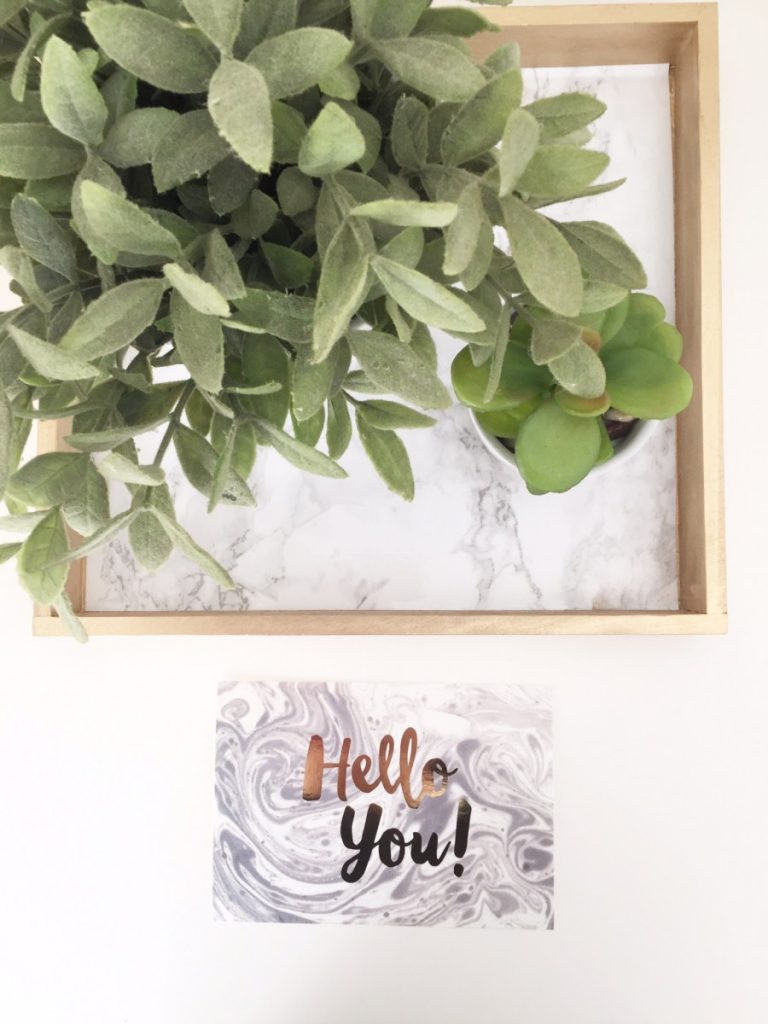 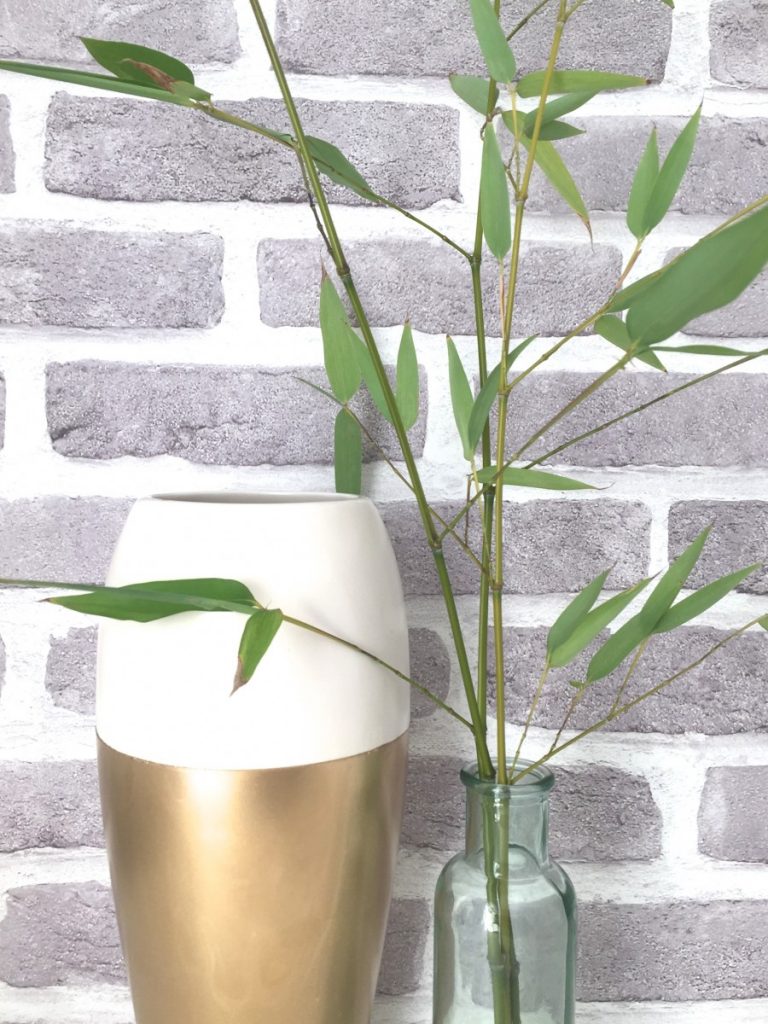 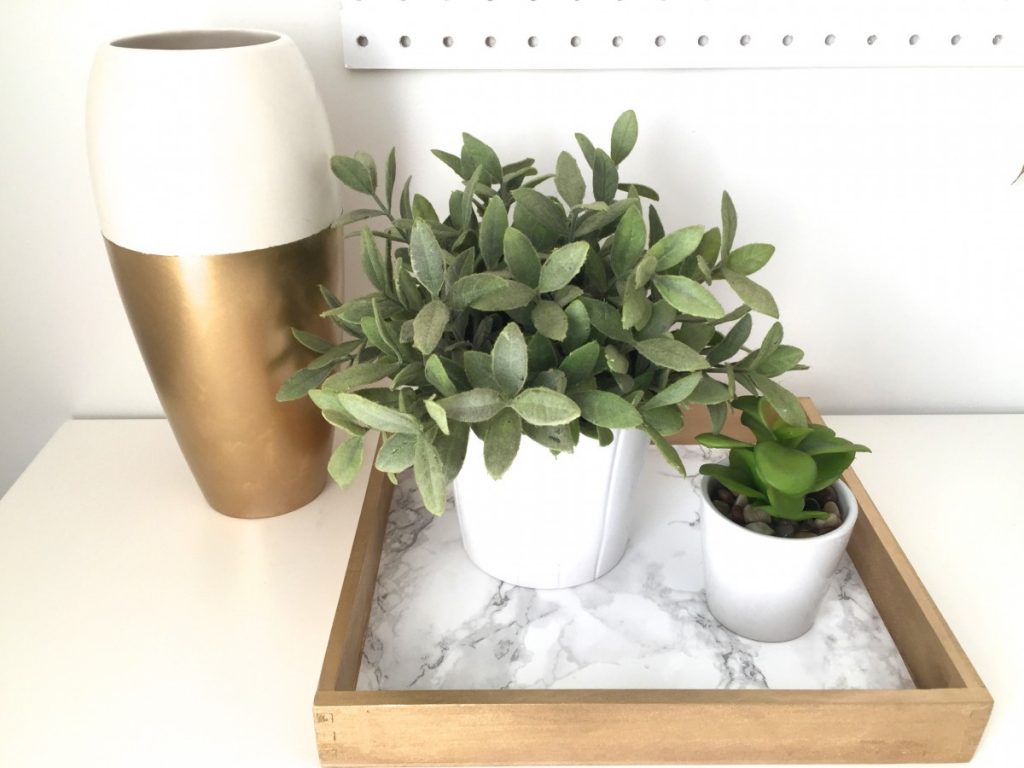 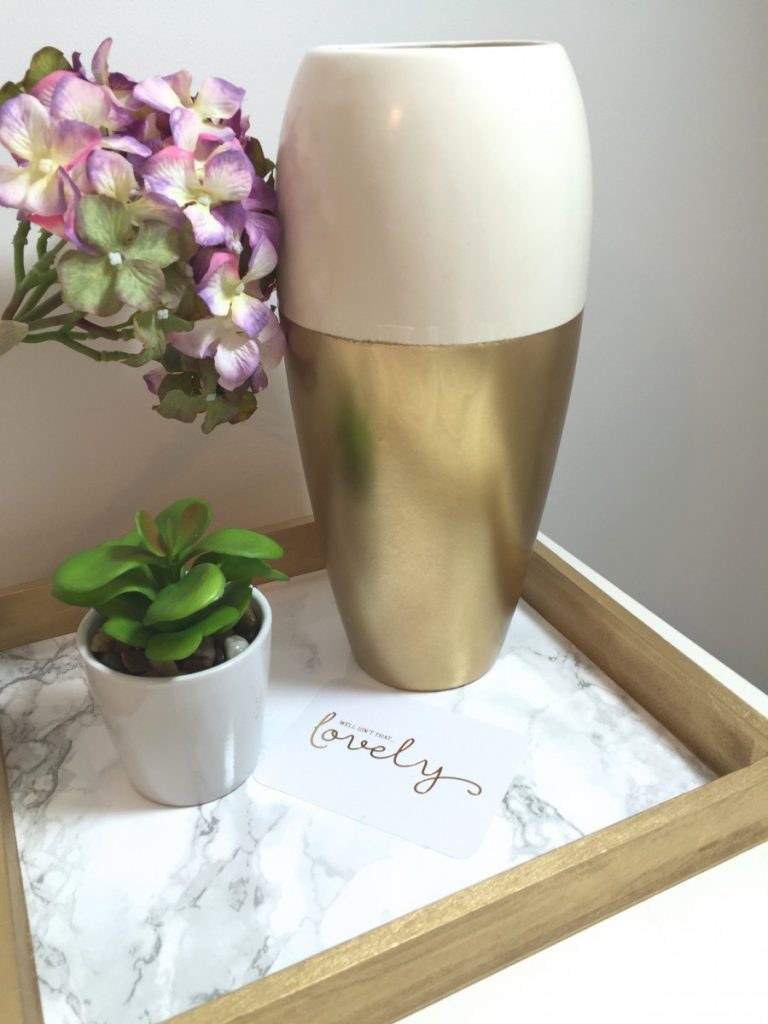