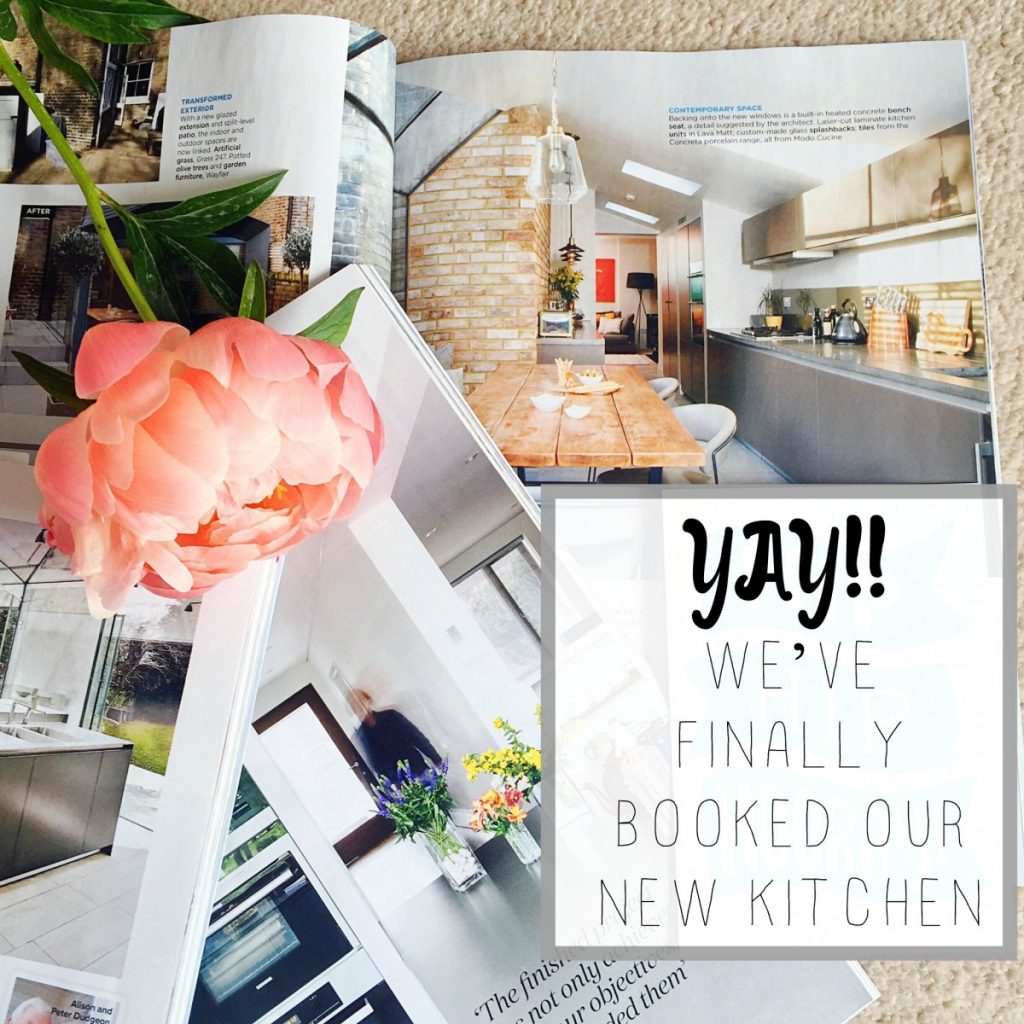 Yes, we’ve finally done it. We’ve booked and paid the deposit for the kitchen of our dreams, which personally I’ve been lusting after probably since the age of two.

And I can’t tell you how excited I am.

The last time I provided you with a kitchen update, I must admit, I was feeling pretty darned deflated.

To be honest it was a little reminiscent of the whole house buying and selling process, which nearly tipped me over the edge I must say! One moment I was up and all excited and whatnot, but the next I was down again and wallowing in misery and stress!

But as the post title kind of suggested, I do think it was entirely us who were at fault when I explained why being indecisive was not exactly beneficial to us as we tried desperately to plan and decide upon what we wanted.  There was just far too  much to’ing and fro’ing I think.

But anyway, back to our fab new kitchen and talk about a weight lifted, as we now even have a date set for the work to commence and everything!! Yay!

So, let me give you a new kitchen update.

After we last posted, where we were being told the project would be too much money, and it wouldn’t even be able to start for another year due to builders being booked up, we found a little route where we could get things up and running a little quicker.

As I was flicking through one of my beloved interior magazine I came across a kitchen company which illustrated the kind of designs I was after, and which luckily had a showroom local to us that we could go and check out. We gave them a call that very afternoon, and arranged to go and see them as soon as we possibly could.

The kitchen salesman was extremely pleasant, which I think counts hugely when you are buying something. And after all, they’ll be working with us for rather a long time on a project which is extremely important and exciting to us, and also extremely expensive! I don’t know about you, but it’s certainly not everyday we buy a new kitchen here in the Midlife Mummy household!

As we looked around the showroom, we immediately liked what we saw.

And then came the clincher!

This particular kitchen company also provided their own builder for any structural work. Perfect!

So basically, rather than finding a separate kitchen fitter and builder, who wouldn’t be able to work until 2017, we found a kitchen fitter who would employ their own builder as part of the fit out process, which meant the work would start when the kitchen fitter called it I suppose.

How utterly prefect for an impatient person like me!

So, rightly or wrongly, this was the winning factor when it came to the comparison of other builders and kitchen companies. Ok yes, so I think it worked out a little more costly, though really only marginally, and we decided together that we’d much rather have paid slightly more to get it as soon as possible.

I’ve seriously waited too long already for this, so waiting another whole year, was not an option in my book.

So, with all that, and with lots of planning meetings already had, and with a fair few still to come, we actually have a start date of 25th July 2016! Woohoo!!

I can’t wait to write more updates as we now continue on with our happy little kitchen renovation journey.

The journey so far……

Our Dream Kitchen : The Beginning of our Journey

Our Dream Kitchen : Why Indecision is Not an Option