You’ve heard me banging on for I don’t know how many weeks now, and finally, we’re at a stage where the vast majority of work has happened, so I can show you the new kitchen space we are living in.

And oh my, what a complete and utter change it’s made from the separate kitchen and dining room it was before (read here).

I used to spend so much time in my bedroom, which is actually lots bigger than our living room (ooh, perhaps I’ll do a room tour of that one day too), as it has always felt such a comfortable and spacious place to spend time in. Our living room is lovely, as it really is quite cosy and snug, so for the most part this is where we spend cosy evenings watching the TV or films, but again, it was always a little on the small side when we had people over.

But now, after weeks of building and general installation (update one, update two) we have a fantastic new space which is already being used to the max!

it took a long while of us looking longingly and impatiently at the new room as it transformed into its new form, but all the while, being covered in dust, with power tools and building materials strewn around the floor, we just had to look on as we turned right into the living room for dinner or upstairs to make toast!

But now, we’re practically there. We’re in and using it. Everything is pretty much functioning now, apart from the cooker extractor fan, which unfortunately was faulty so is being changed this week.

There is still rather a lot of remaining work for the build team, but all very much smaller remedial items and issues, such as final painting, fixing some cupboards, fitting the splash back, external painting, fitting of the door adjustments etc, so as you can see there is still the masking tape by the skirting boards!

And then of course there are the snagging issues which I’ve kept a very close eye on and are meeting with the team on a regular basis to discuss these issues.

There are also all the things I want to put into the new room, which at the moment we’re unable to afford, such as a new smaller and hopefully extendable table, a small sitting area with corner sofa, coffee table and television, lots of lovely wall art and more greenery! Plus of course all the smaller decorative items which are currently on my wish list.

But despite these, it feels as though it’s taken forever and I really cannot wait a moment longer to show you all our wonderful new kitchen! Masking tape and all! 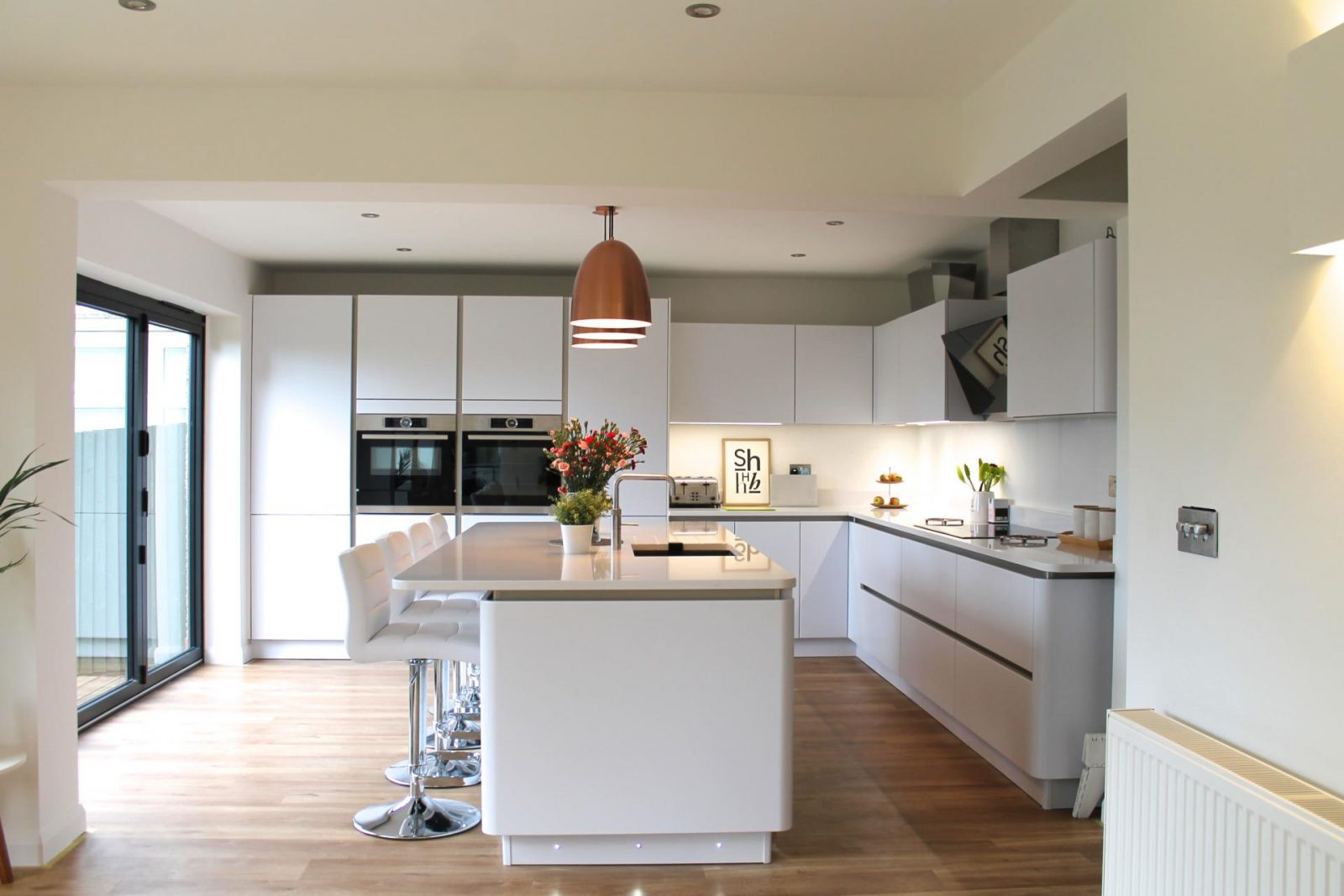 As I mentioned in earlier posts, here is the design I’d had in my mind for the last couple of years. A very plain and simplistic kitchen with modern clean lines and a white and wood finish. 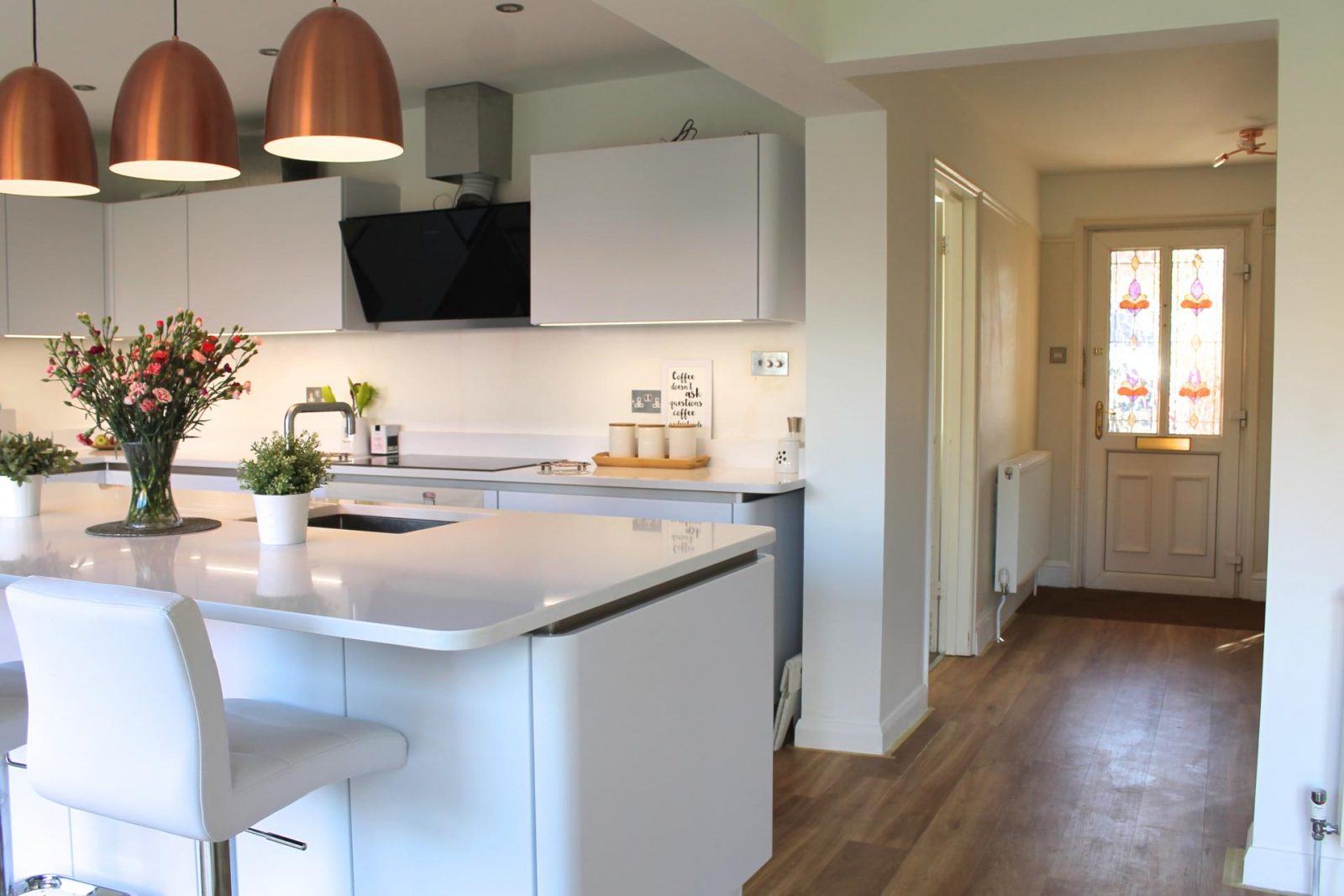 We love how open the space feels now, even through into the hallway, which we also opened up a little. Another thing of the (growing!) list of things to do though, is to now change the front door.

You can also see that the extraction hood is in pieces. Unfortunately there was a slight problem with it on installation, so this is due to be fixed in the next couple of weeks.

Also, there is currently no splash back, but I have everything crossed that this is in place before my birthday party on Saturday night, and my new kitchen’s first big outing (ish!) 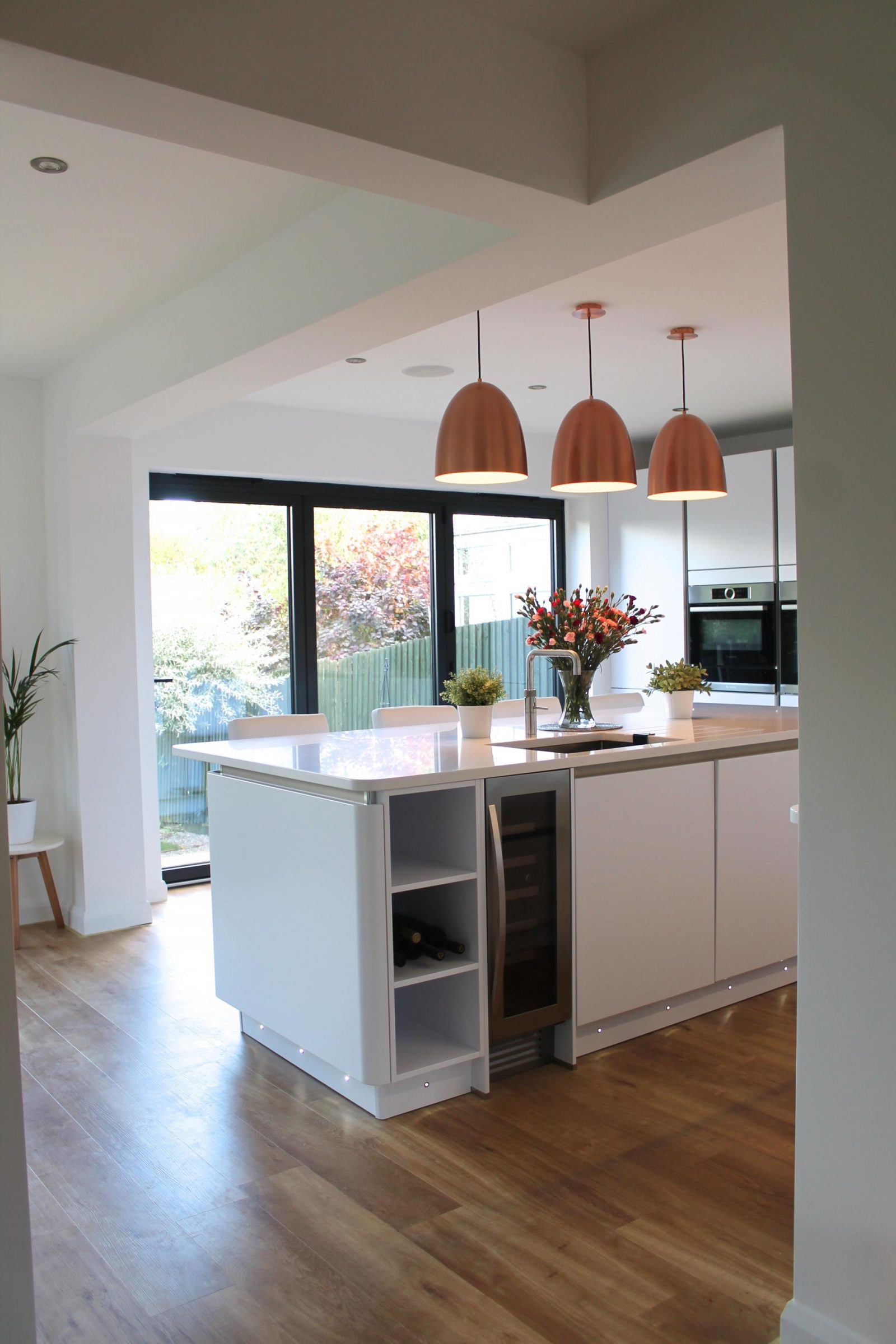 Here you can see the copper pendant lights over the island, which were always on my wish list as a feature item we wanted. And you can see how much light there is in the room Thanks to the lovely new bifold doors. 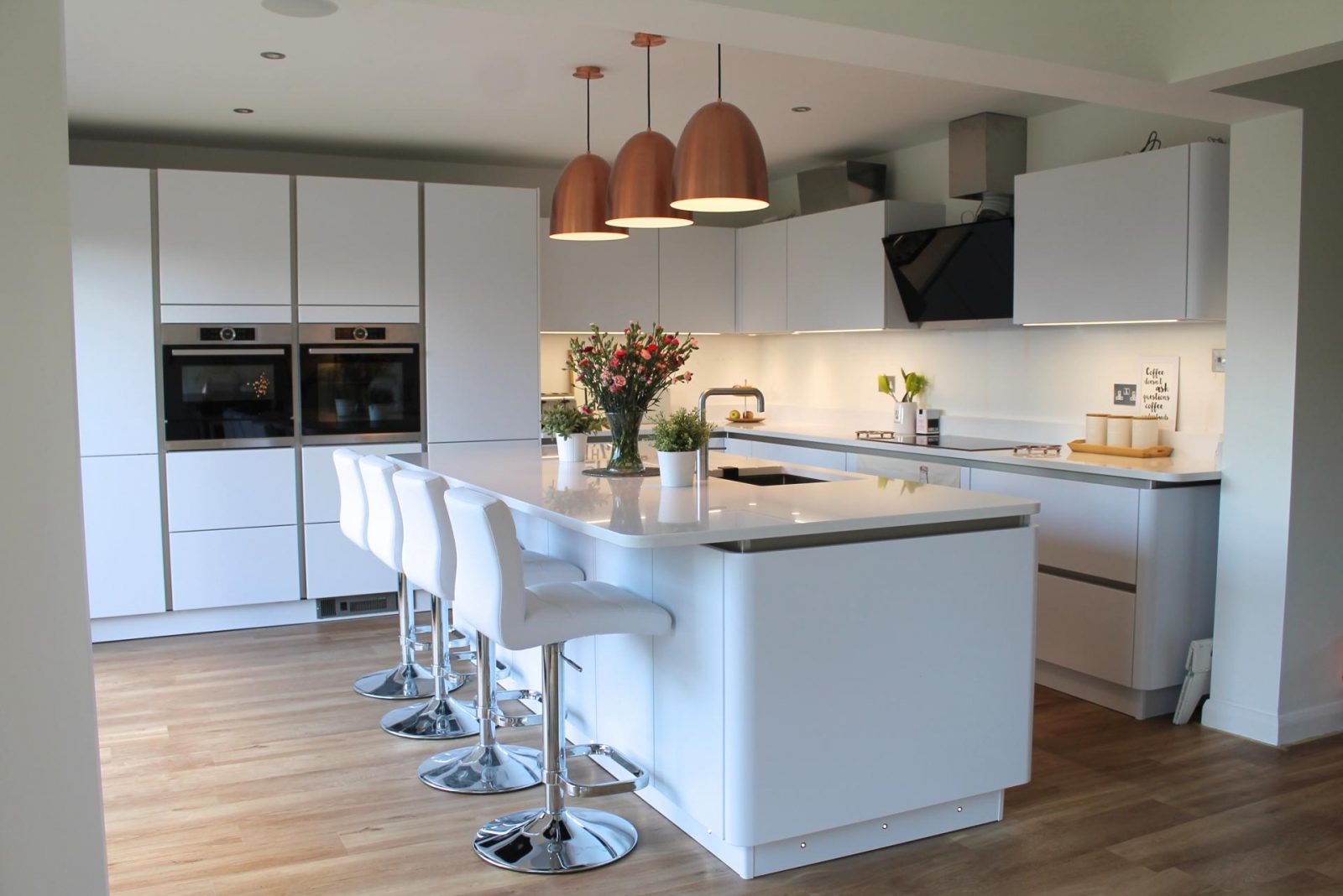 A large center island is the main feature of the room, which has already proved it’s worth with the amount of use it’s now getting. It feels very strange to think we’re now sat in an area which was never really used before, as it was the dining room which was only used on the very odd occasions or as a general play room or toy dumping area for the girls. 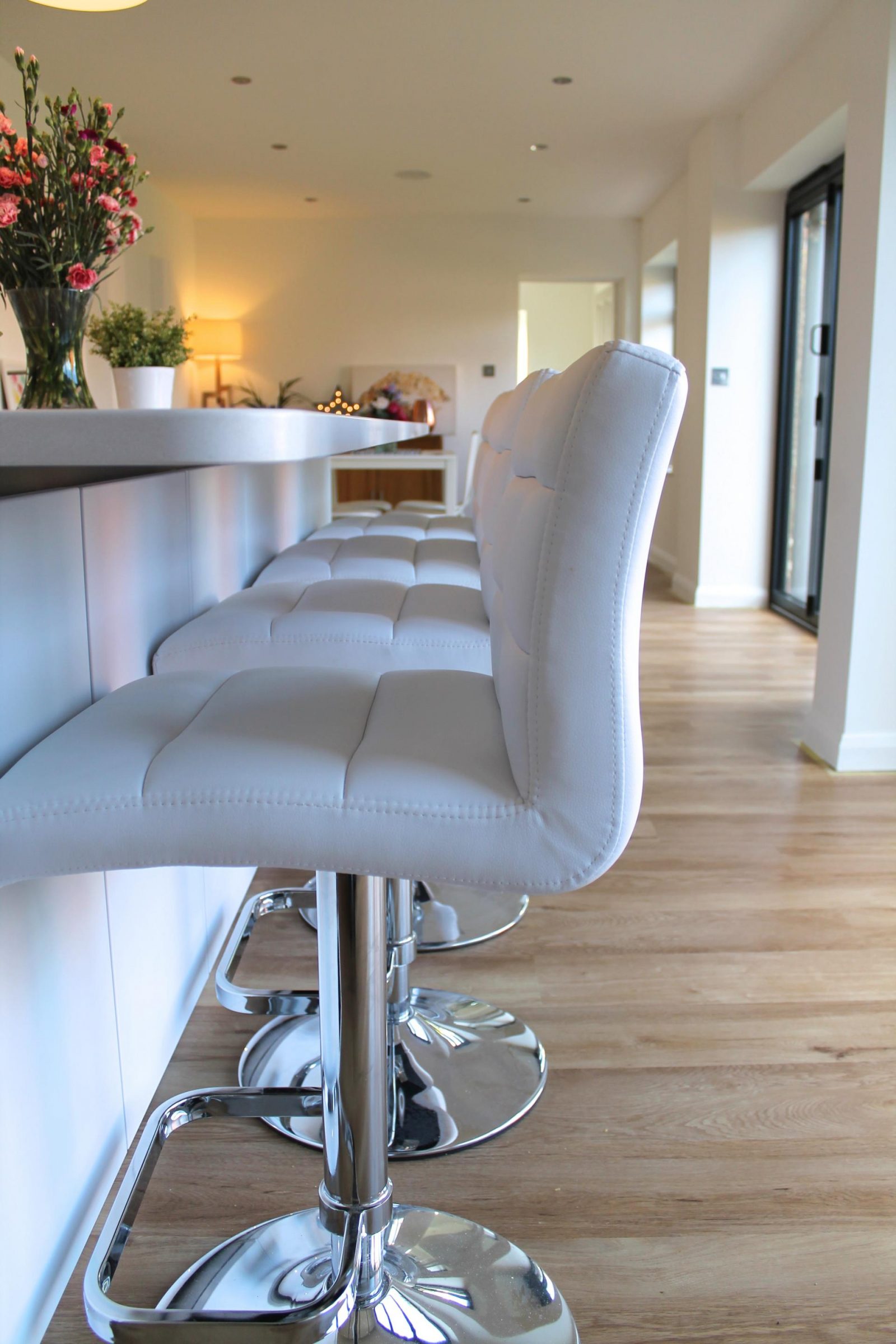 In love with our bar stools, which are just so comfortable! 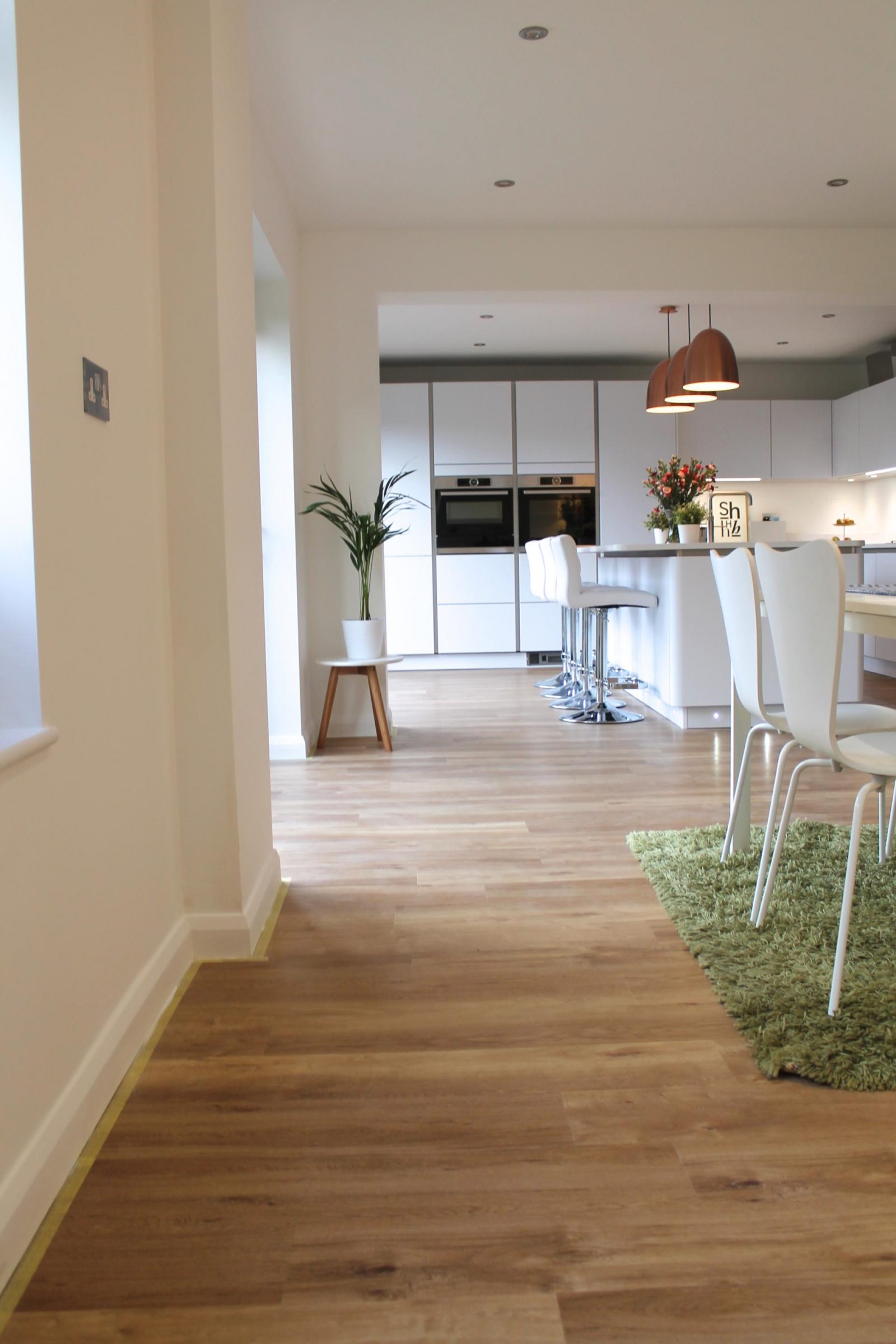 The new hard wearing Karndean wooden floor is perfect for our busy family and was a little kinder to the wallet than it’s competitor, allowing us a bit more spending money in other areas! 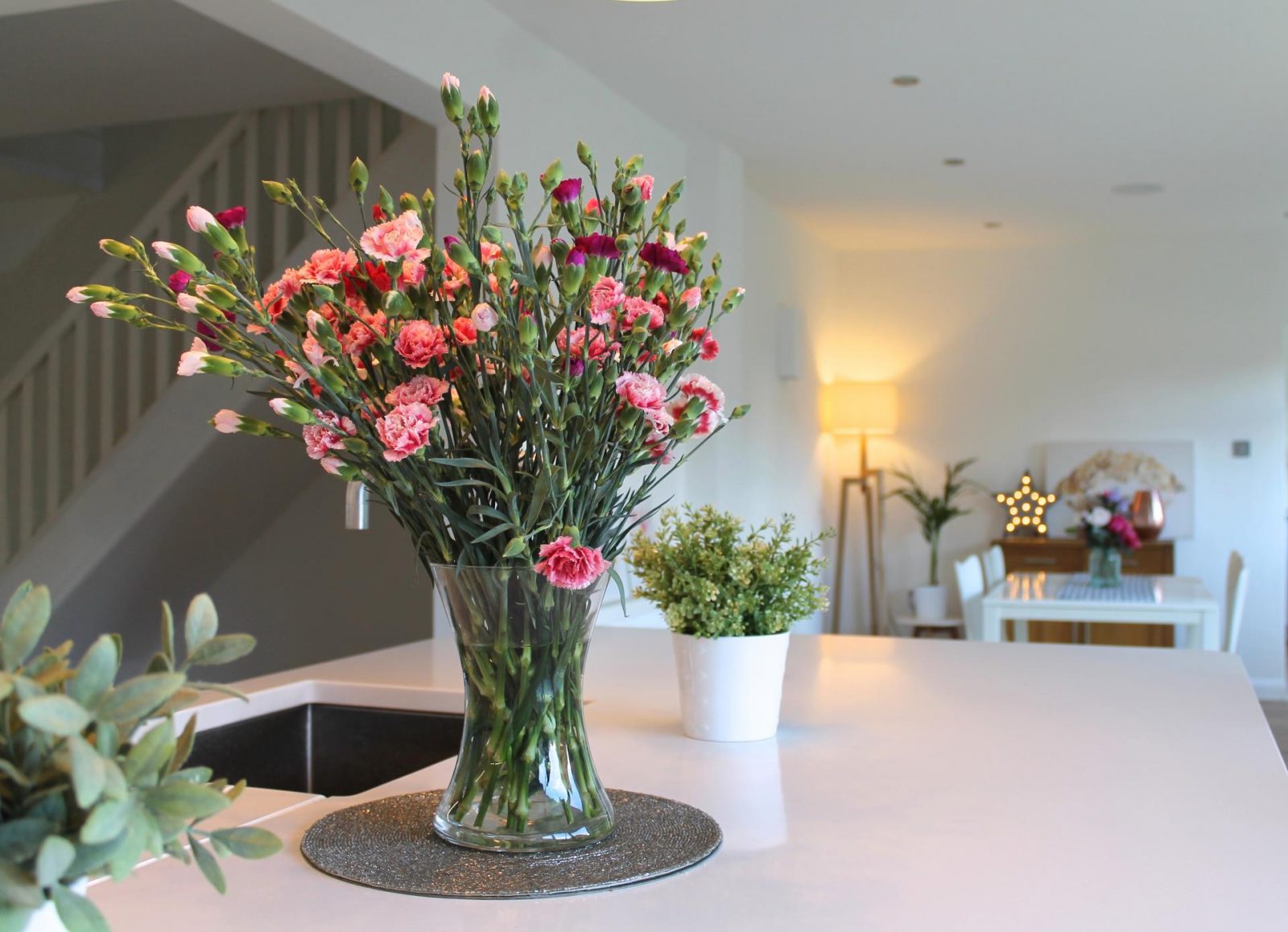 Here you can kind of get the idea of the space we now have in comparison to what was here before, which is just brilliant and is a far more functional and usable living space. 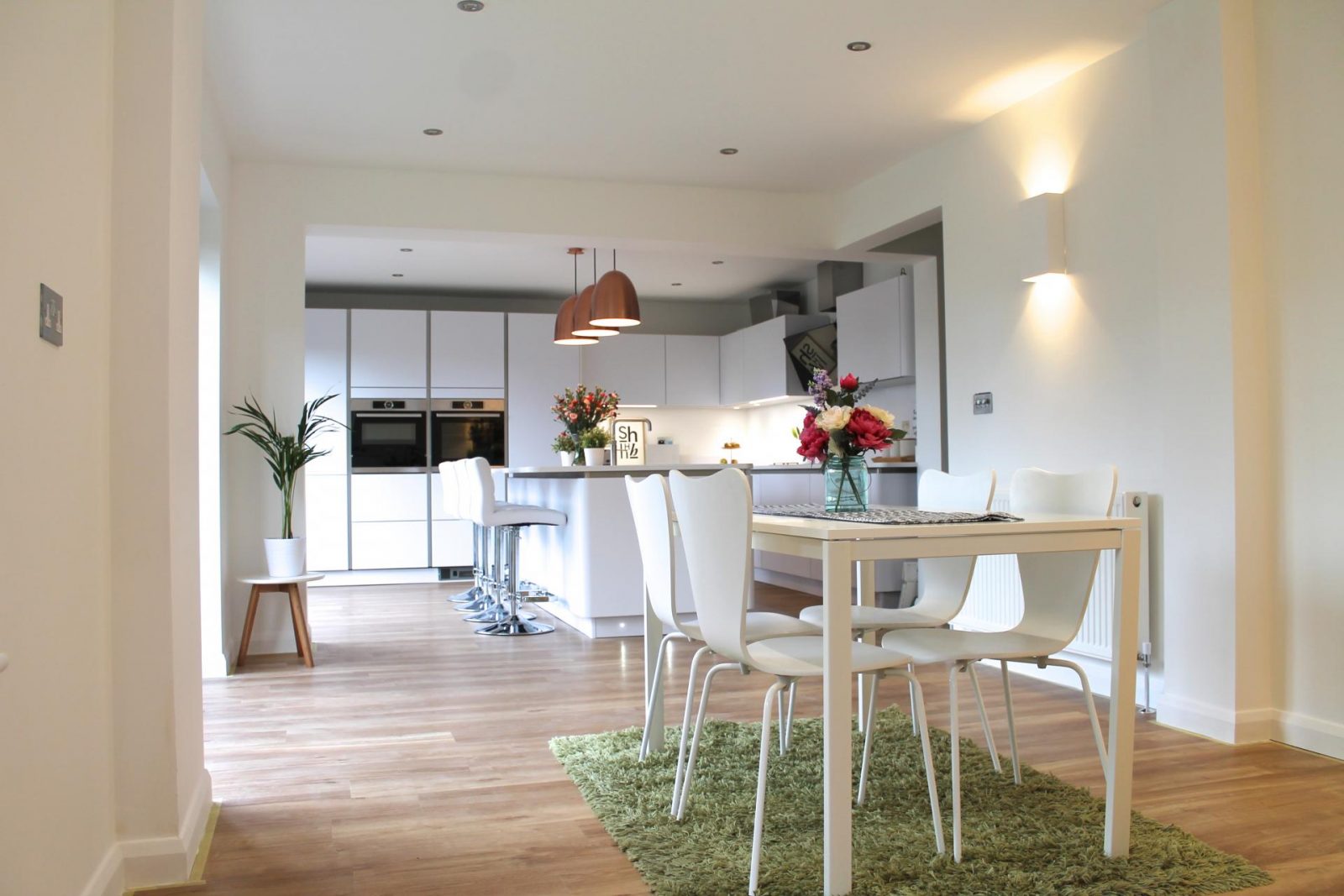 And another view! Picture overload! 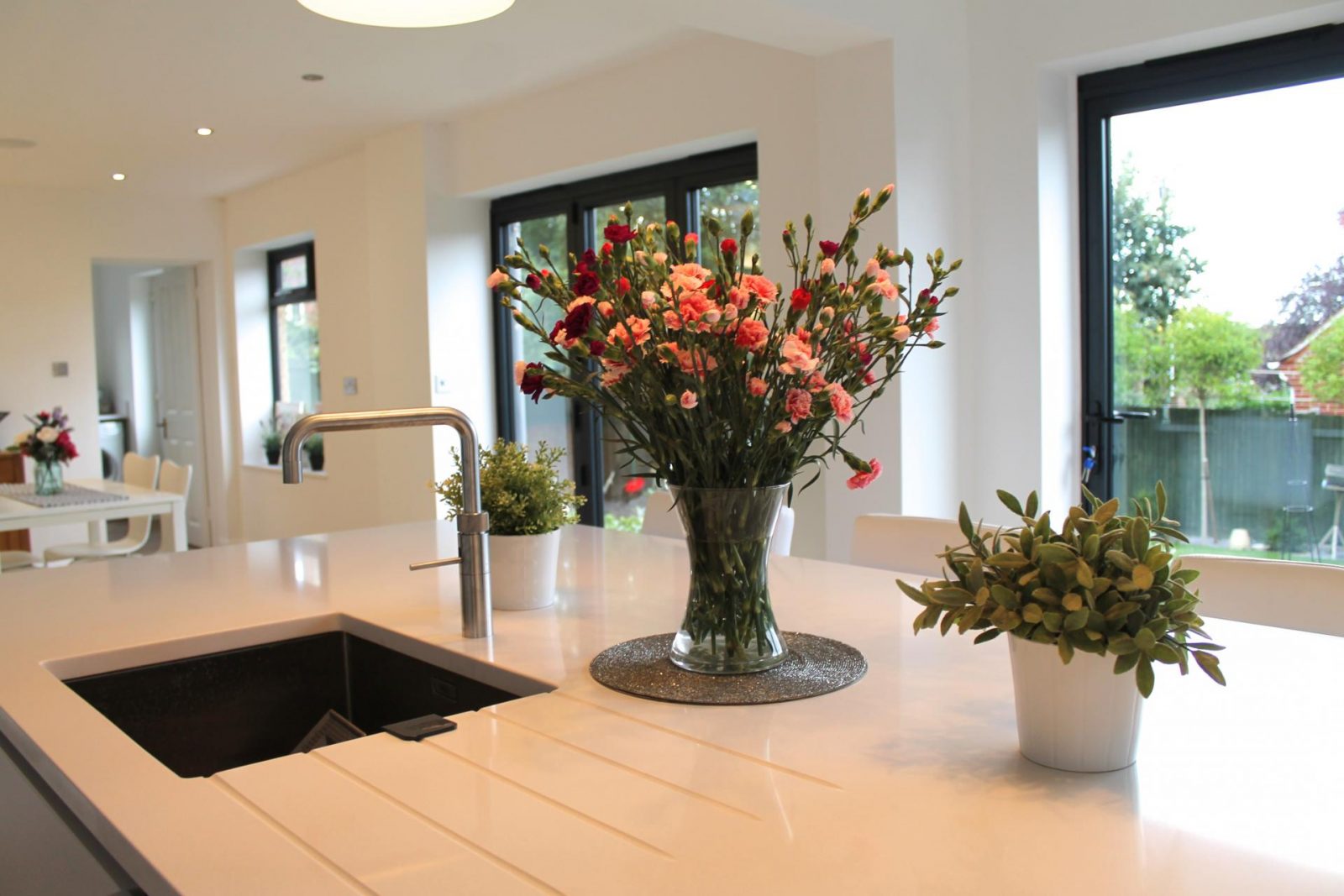 Here you can see the new large window and the two bifold doors. Lots and lots of lovely natural light just flooding in now, and finally I can see outside into the garden with a step stool or very high wedges!  I really cannot wait until next summer to be able to get the most out of having the doors open wide all the time. 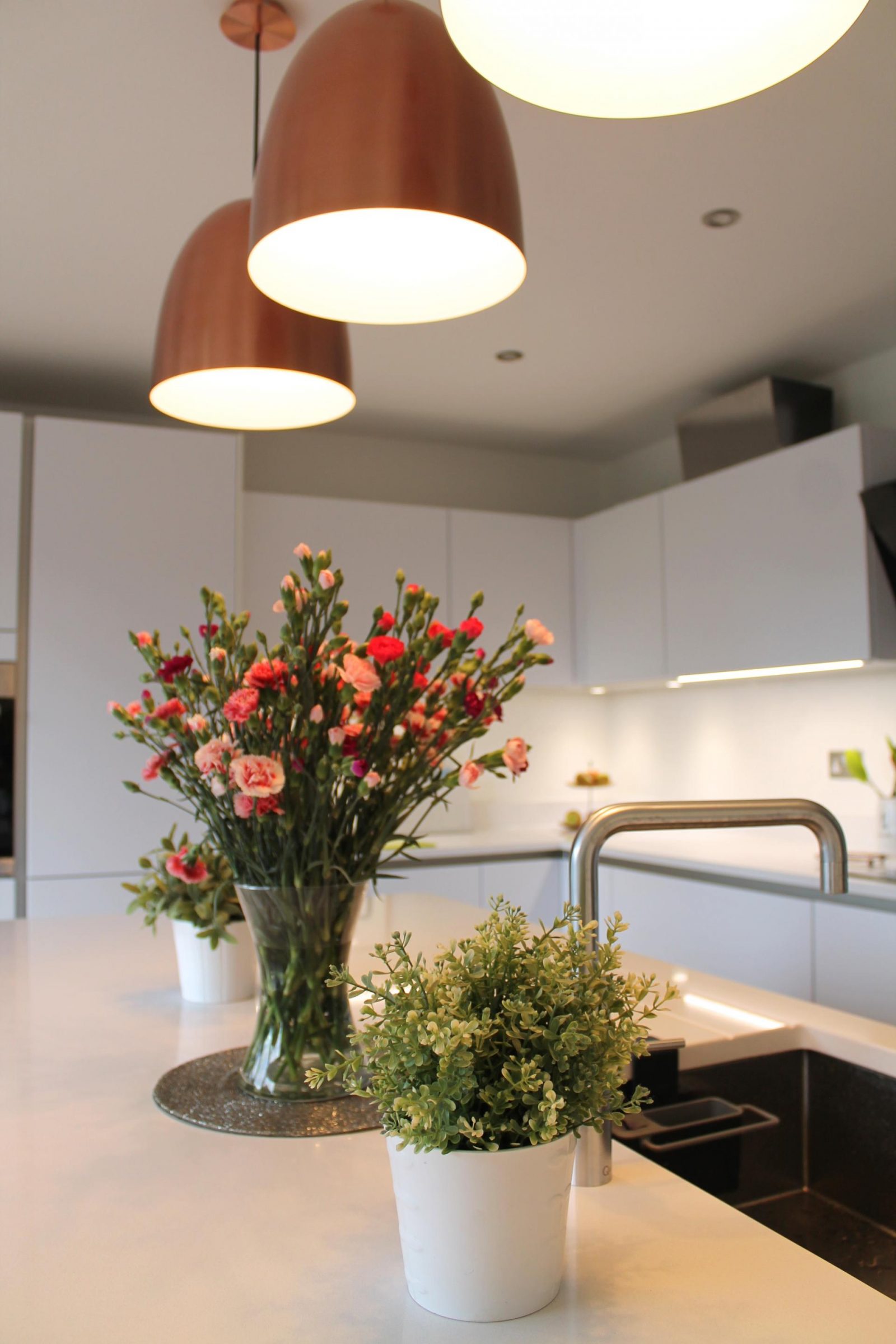 A glimpse of the new Quooker tap – another thing we’re absolutely in love with already! 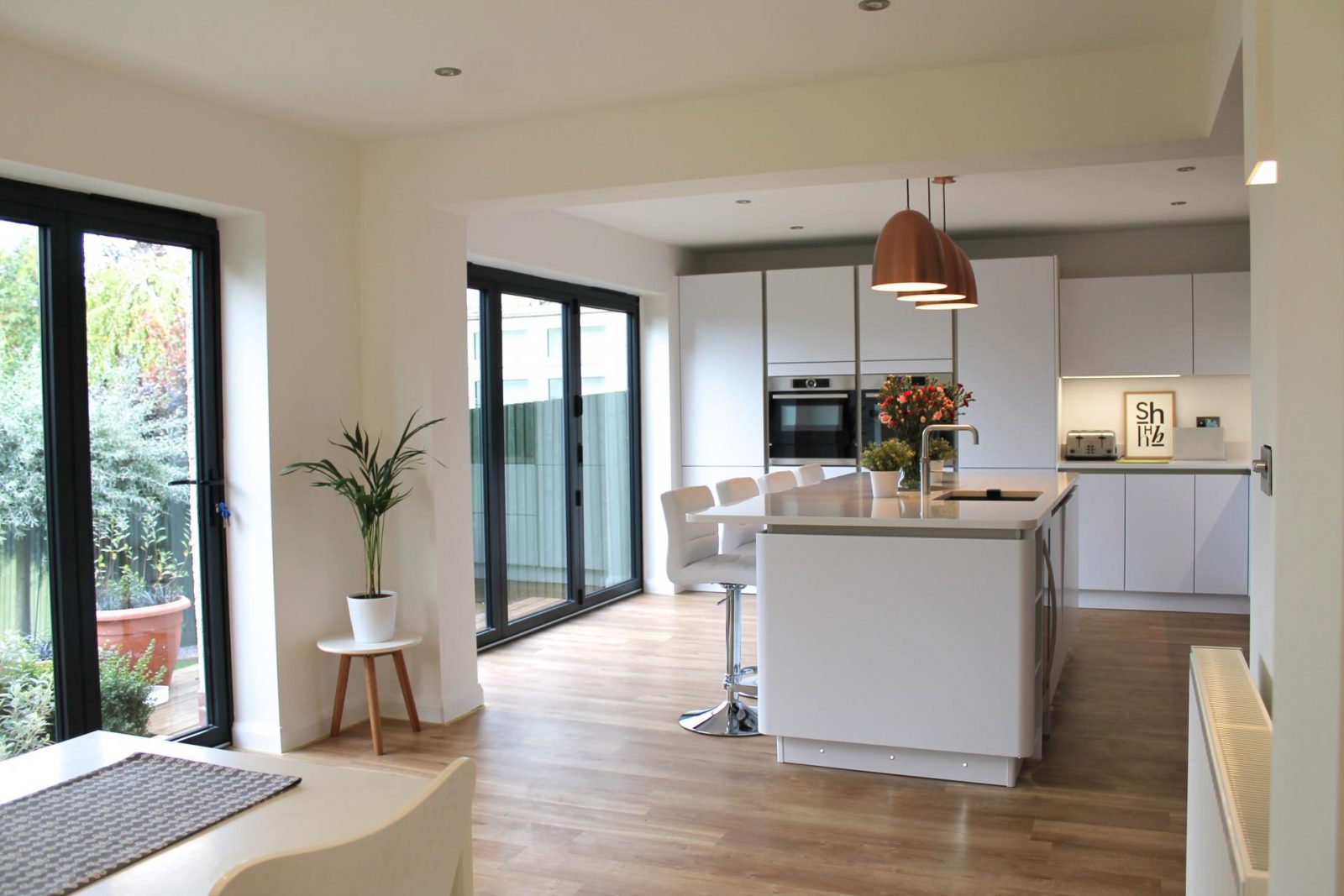 So there you go, that’s the brief tour of our fabulous new kitchen.

We are so pleased with how things have turned out, and although the work has taken lots longer than we’d hoped, and is actually still dragging on a little, we really couldn’t have faulted our kitchen company either.

All in all, it’s been a pretty smooth sailing process!  And I’ve rather enjoyed the banter with the workmen!

And as I mentioned above, still lots of little bits still to do, but what do you think so far?