The possibilities seem truly endless when designing a kitchen, or indeed any room, of your dreams, and as long as you have the imagination, the drive and the hefty sized wallet, you can pretty much get anything your heart desires.

Well, we had the first two of the above, in that we were most definitely driven to overhaul and update the downstairs living space, and we certainly had the imagination and delusions of grandeur (thank you Pinterest!), but unfortunately our wallets were not that full so we had to make do with the footprint space we already had, and many things, such as extending etc went out of the window within the first of the planning stages.  We did try to see if we could reconfigure the house further, but again, this just proved too expensive.

And anyway, we are perfectly overjoyed and happy with what we have as our end result.

So, whether you have a big space or a small space, a big budget or a small one, you can make the space work for your by outlining your general wish list and priorities.

So, personally for us, this meant things to make the kitchen the new hub of the home.

It needed to be large enough to have more sociable space, it needed to be an ‘everything’ kind of room, to cater for cooking, dining and living and we wanted it to be as light and open as we could make it.

We absolutley love, love, love our new kitchen, (if you hadn’t already guessed by the endless photos on my social media feeds!) but to create the dream space  there were a few key features which have really made it all the more special and functional for us.

This is a bit of a game changer in my book!

Our old kettle used to take absolutely ages to boil, but with this it’s a whole other story!

Now, when we have people over to visit, or as when friends and family stop by, I offer them a tea or coffee and within seconds, they’re sipping happily away on their piping hot cuppa!  It’s brilliant!  It’s also so much nicer in the mornings when we’ve just hauled ourselves out of bed, to be able to make a perfect hot drink as quickly as possible so we can hurry back up the stairs and get back under the duvet again! 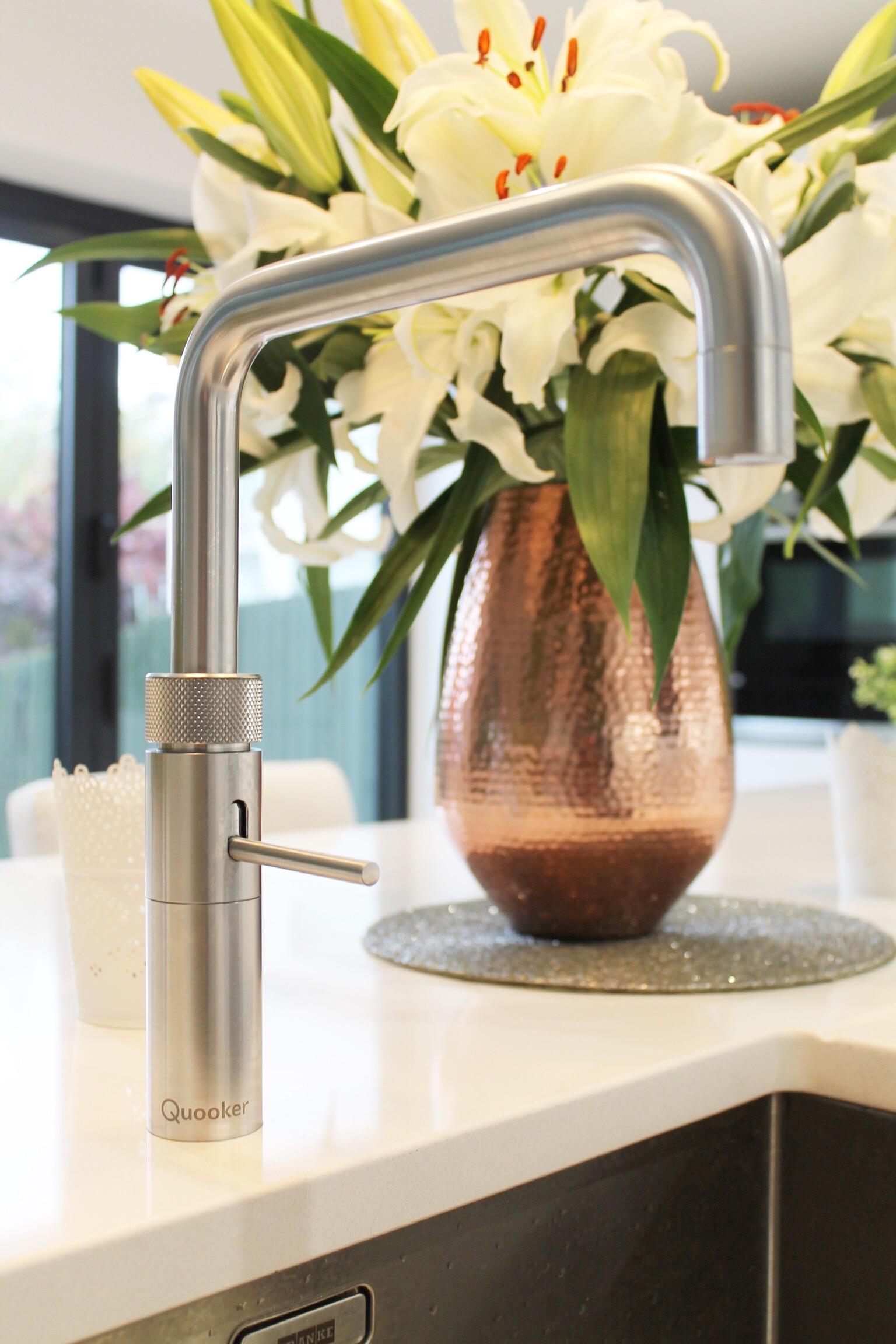 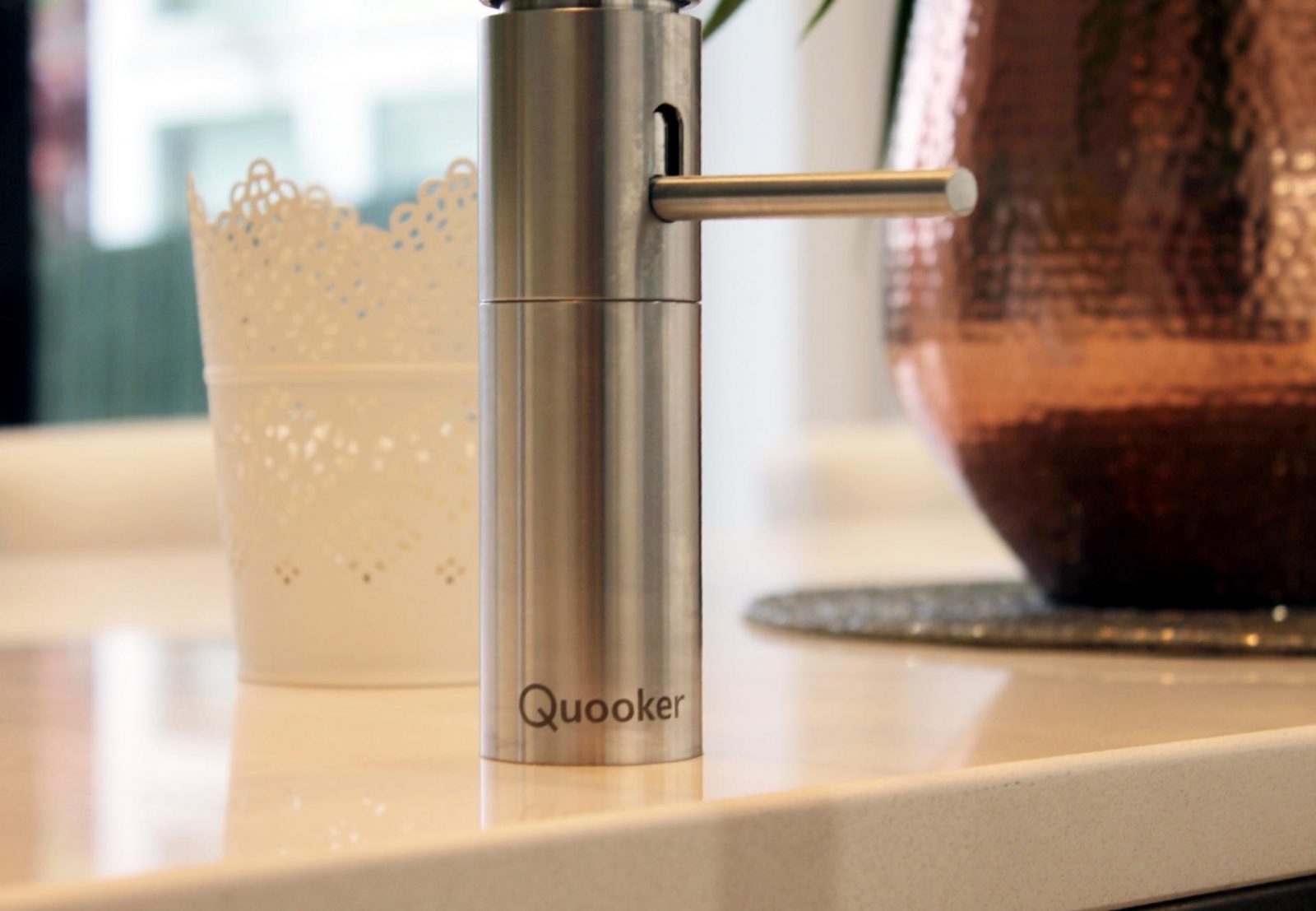 These are amazing too.  These weren’t on the original plan but when we popped over to a friends house earlier in the year for a bit of a party, they had these and I was immediately smitten!

It’s not exactly a necessity I know, as probably are a couple of things we have, but we just thought it would be a fabulous addition to our dream living space.

We have two speakers in the ceiling, one in the kitchen area and one in the living area, and I suppose in hindsight, we could probably have got away with having just the one, as the sound is so good.

They were a perfect addition to my recent 40th birthday party too.  With the help of my friends, I put together a great playlist of new and old, and we all had the best time just dancing around and singing along until the early hours of the morning.

I also had a few of the local children over for a Halloween disco too, with lots of scary music and flashing disco lights which they just loved.

I really think this adds so much to our new sociable kitchen. 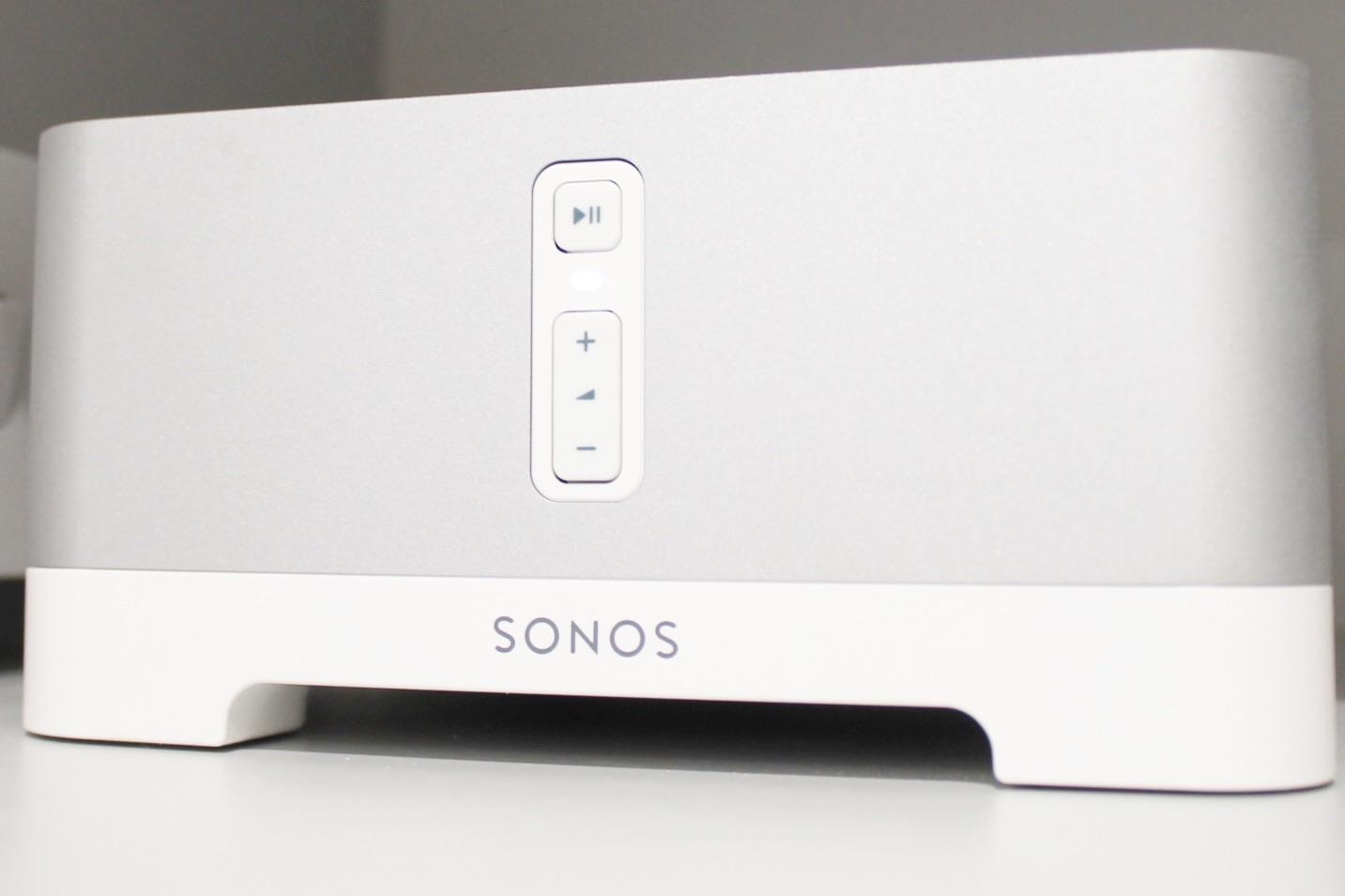 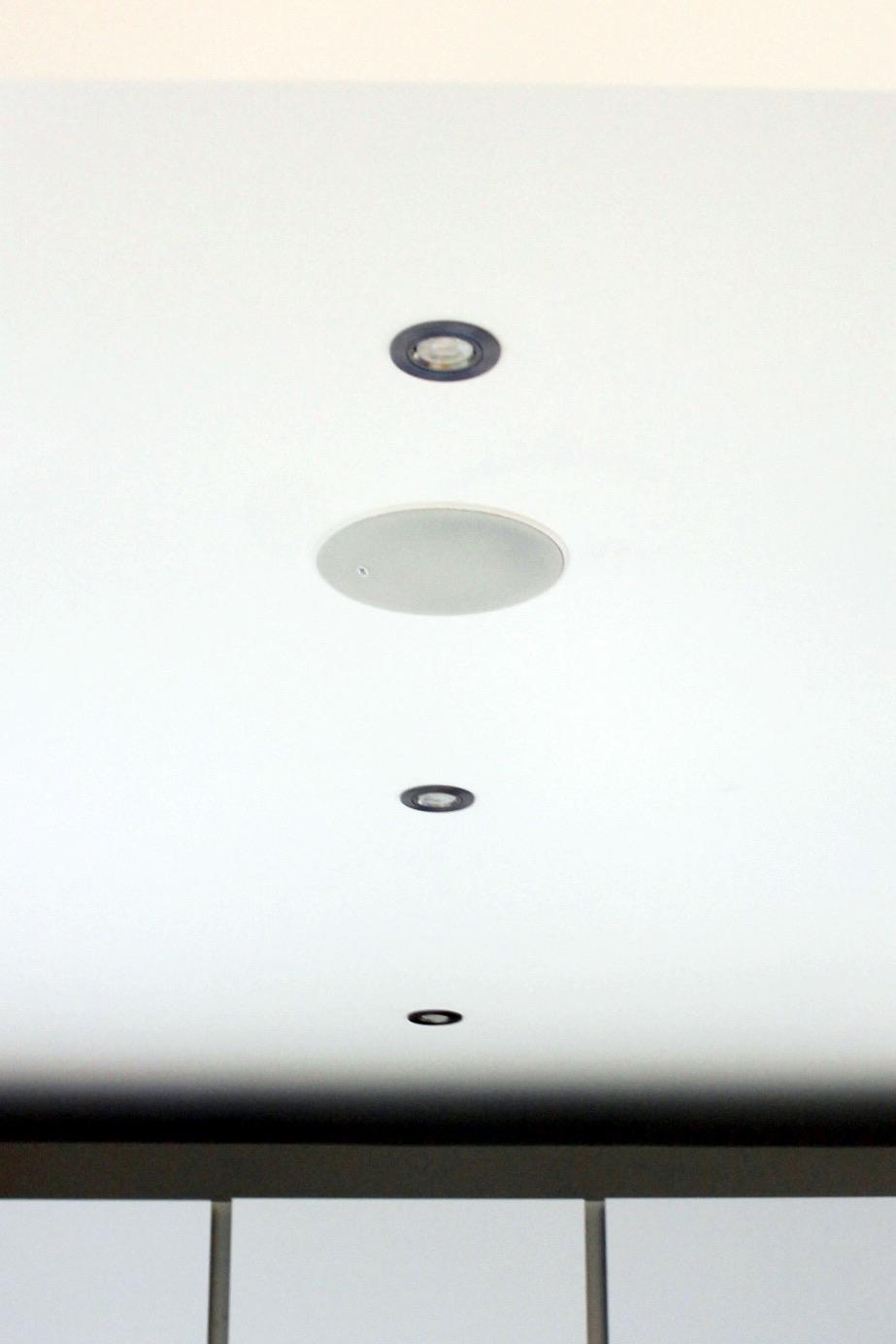 To be honest, during the early design stages of the rebuild, I was a little worried about the size of the island we had planned, as I was concerned we’d kind of bitten off more than we could chew.  Initially we did have an overhang on one end of the island too, because I wanted people to be able to sit actually around the island to chat, rather than in a straight line.  But, once we’d seen the new space, and had more of an idea about main thoroughfares and access through the room, we decided against having this lip, due to lack of space. And it’s worked pretty well. It’s not everyday that we have enough people around to require this extra seating, and what we did was just buy a couple of extra ’emergency’ bar stools which we keep in the garage, which we just bring out as and when people are around. This gives us the best of both worlds. Extra space for day to day living, yet the possibility of extra seating when required. Perfect. 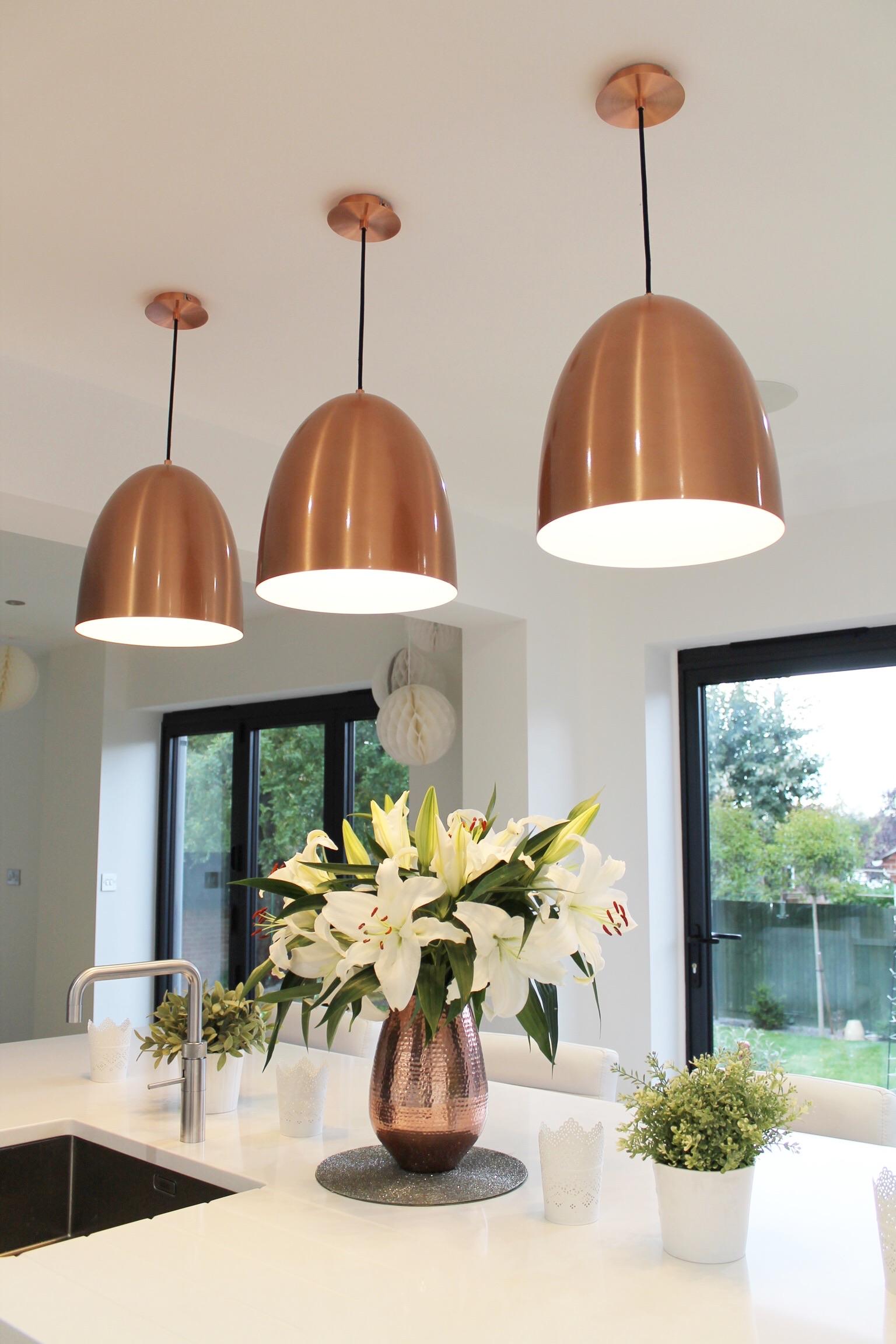 I absolutely LOVE these pendant lights.

For years these have been on my radar and I’ve listed after images of similar ones in magazines or on our favourite Pinterest, but finally I have some of my very own.

It took me a long while to source them, as many were of the wrong size, and some were hugely out of our price range!

With the pretty plain white backdrop of the rest of the kitchen, I feel these add a real pop of subtle colour and understated elegance and glamour. 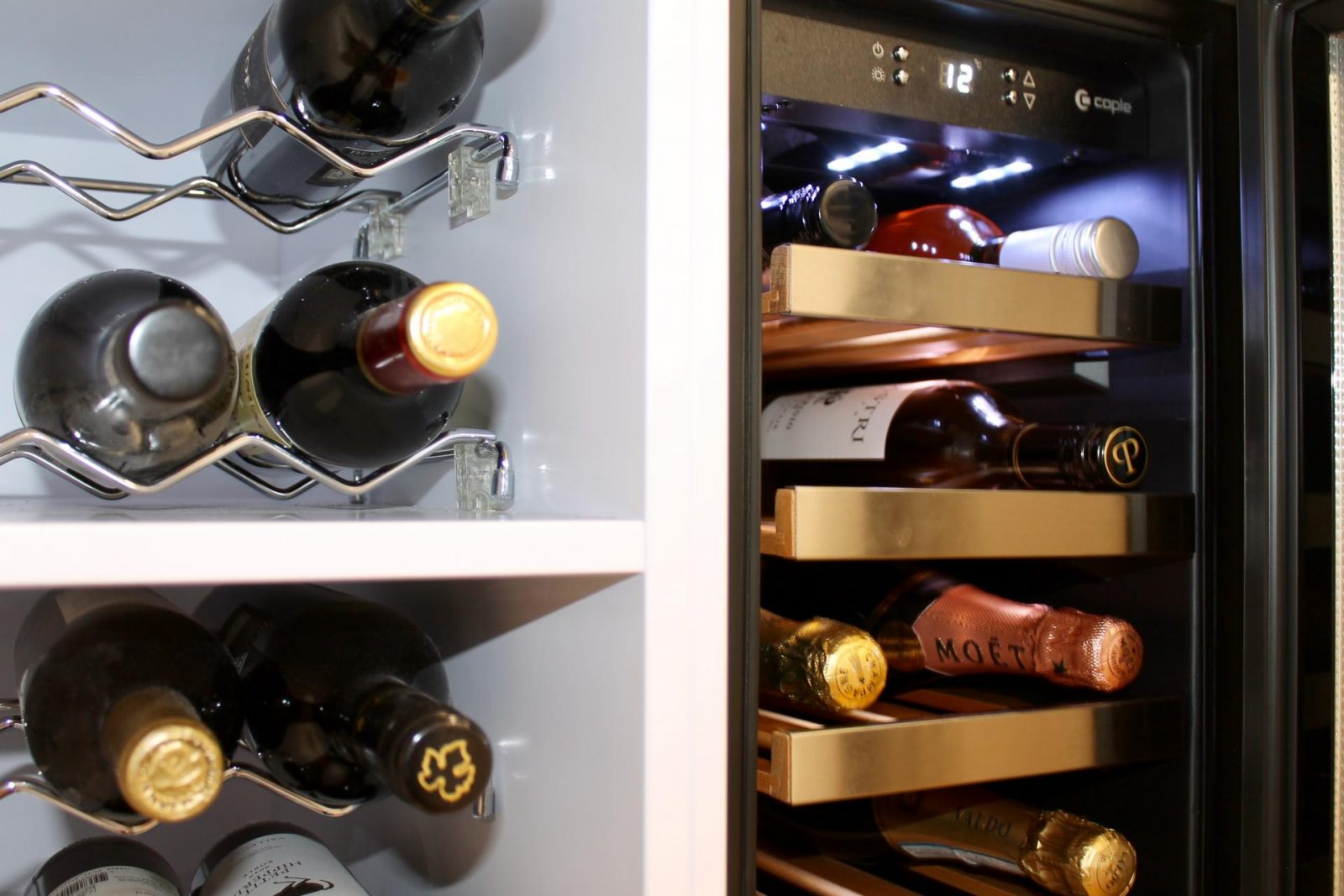 This is another feature which I suppose is not exactly a necessity! For some!  In our house, it’s pretty important!  As I’ve said, I really wanted the new room to be a sociable place and somewhere my friends and family can call in and have a quick glass of wine or two.  In hindsight, I wish we’d had the bigger fridge, but to make up for this, we have the red wine rack also, so I suppose we can keep all likes and tastes happy! 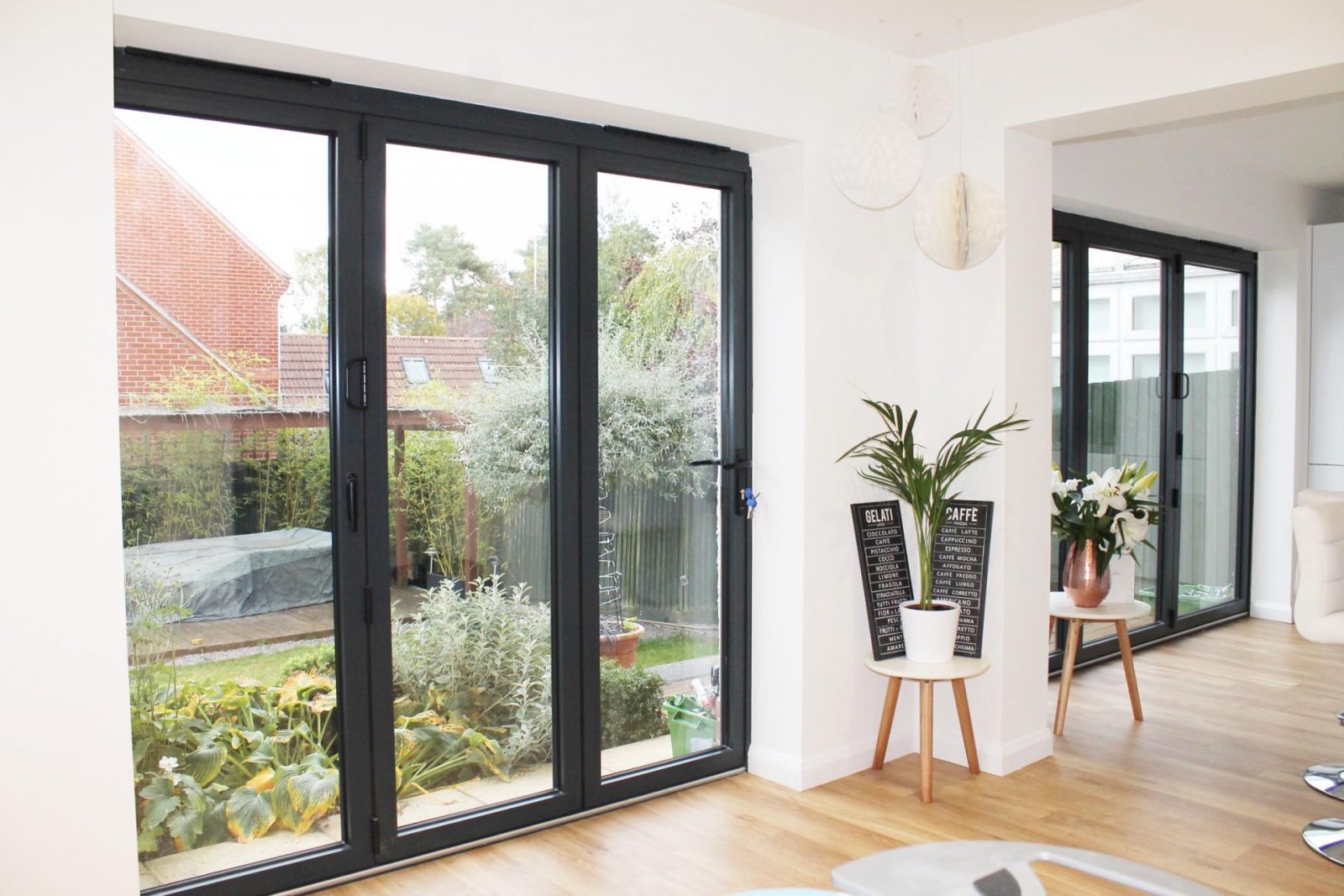 These are probably my favourite of all new additions to this room. For so many years, these have been on my dream wish list and again, finally we have them all for ourselves.

Initially, with the original design, we’d said to only install the new bifold doors in place of the old dining room patio doors, but after a fair few chats we decided to just ask how much it would be to add a second set in also, in place of a second large window. And oh wow, I’m so glad we did.

The amount of beautiful natural light that comes in now is just astonishing.  And with the room being long yet narrow, it really does flood the entire room.

I just love now being able to see the plants and flowers in the garden, sitting on the new sofa wrapped in a warm blanket and sipping on a cuppa, whilst watching the rain pour down outside, and I can’t wait for it to snow so I can watch that from the comfort of my cosy new kitchen too.

I’m in love, and so very, very happy.