For the last three weeks, our poor little Ella has been hanging upside down from a hospital bed, in traction to fix a broken femur, and meanwhile Mr B and I have been living out of a bag doing 24 hourly shifts at the hospital to be by her side.

But, at last we’re finally home from our stay in hospital, and although it’s certainly had its moments and been fraught with stress and anxiety from this and all the other things we have going on at the moment in the Midlife Mummy household (Tough Times), I can quite honestly, hand on heart say it’s not all been bad!

Don’t get me wrong – is was no five star hotel break, but it could have been a whole lot worse. So instead of dwelling on the negatives, we stayed as positive as we could and ‘made the most’ of the time we spent there! I mean, why be gloomy – it was a situation we had to just get on with, so we did!….

Whilst there, Ella was looked after superbly by the nursing staff and fully entertained by the dedicated Play Team who are also based in the children’s ward.

She did sticking, and she baked cakes – which we heard made the nurse team ever so happy when we gave them to them for their tea break!… 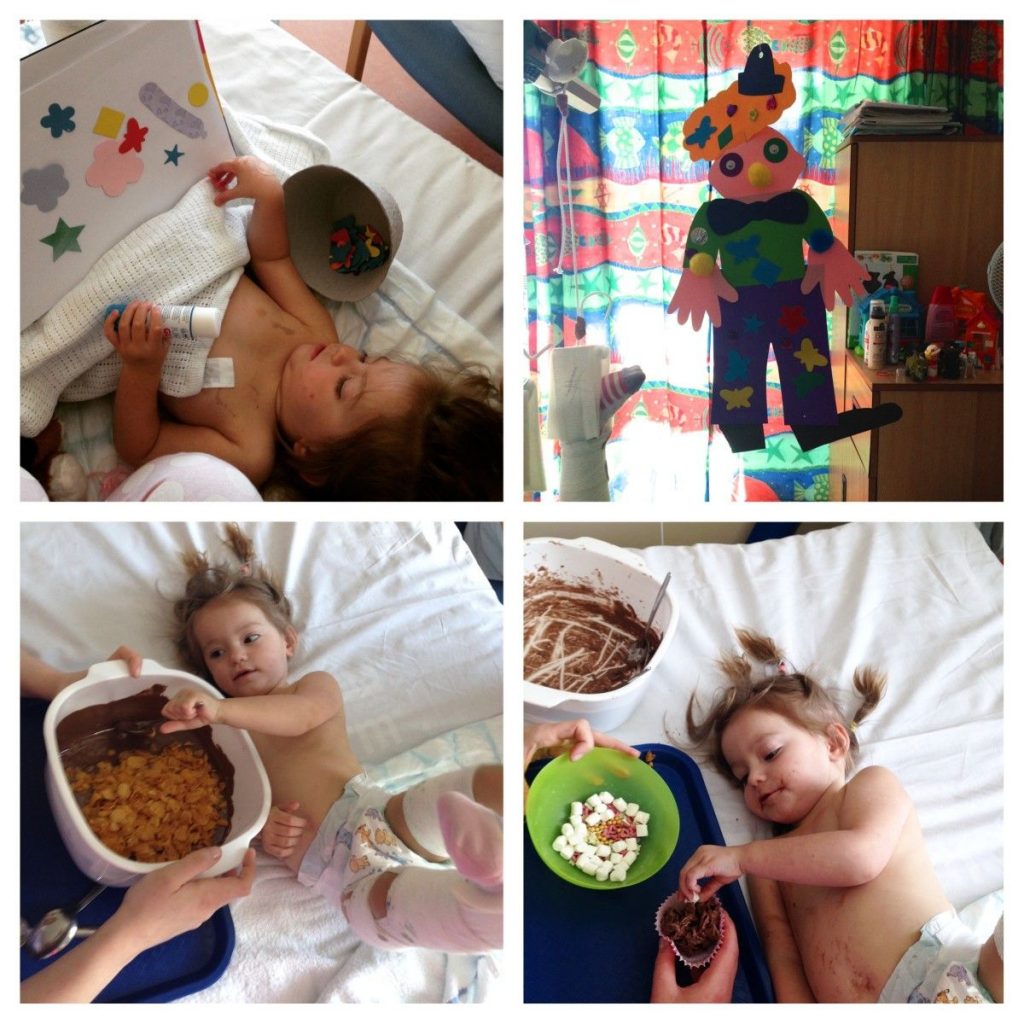 She did lots of painting; nursed her sick animals, and even had a visit from a magician/balloonist.  She also played with practically all the toys I think they actually hold in the ward!… 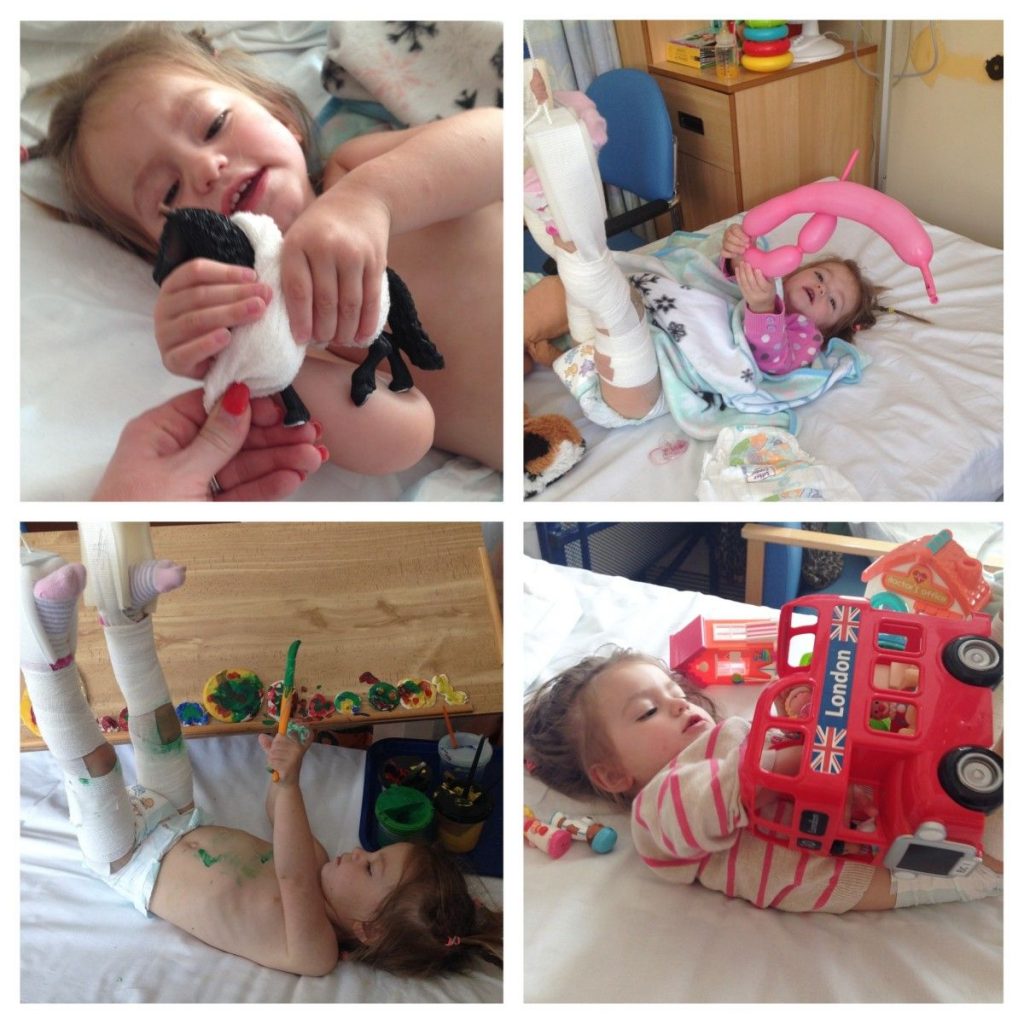 She’s made dens. Every day!!….And incessantly asked us if we wanted to join her

Mummy, are you coming? 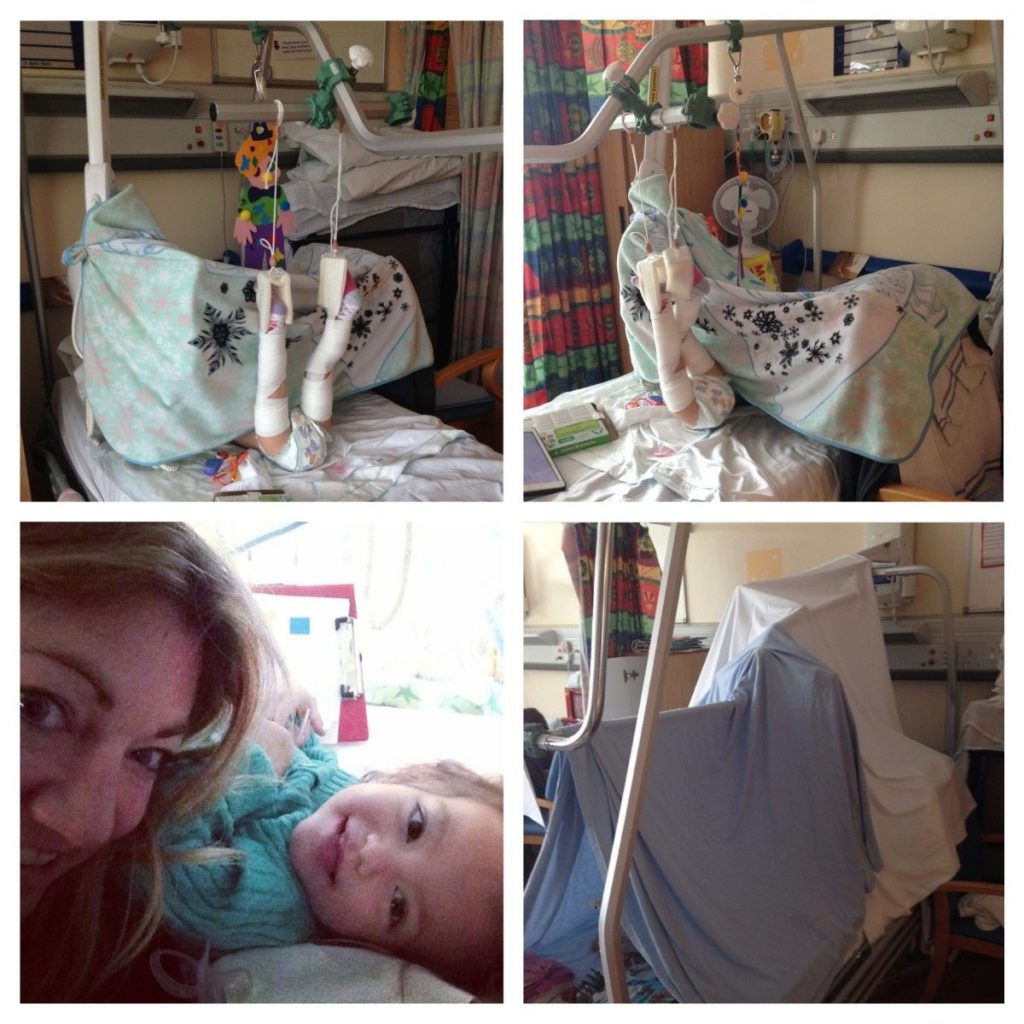 She made salt dough trinkets and even a handprint plaque to bring home with her as a moment of her time in the ward. 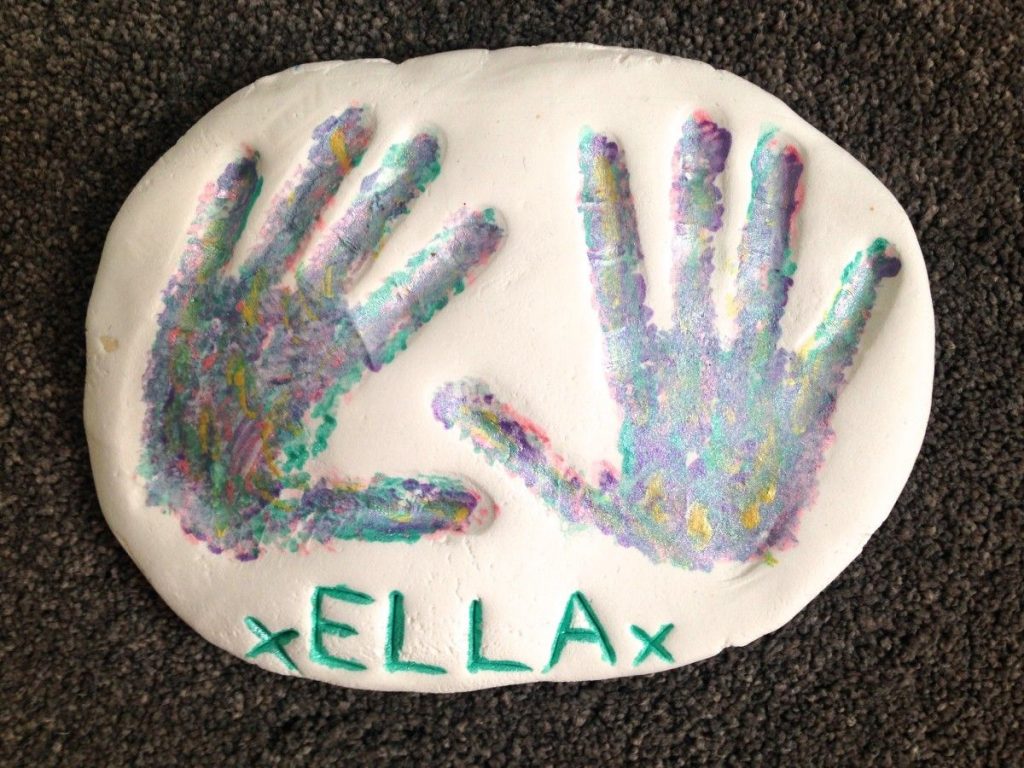 And if this couldn’t be enough she even had two Music Therapy Sessions run by the amazing charity ‘Rosie’s Rainbow Fund‘, who visit all the sick children in hospital on a regular basis, armed with the the most fabulous array of instruments, smiley faces and buckets of enthusiasm.  All the children absolutely loved this. And, these were without doubt Ella’s favourite sessions. It was beautiful and heart-warming to watch as her face just lit up, especially after she’s been though a fair bit in the last few weeks.

She even made up her game of ‘Stop and GO’ – where we all had to play the instruments until she said stop.  And then instructed us to play again

This went on for a while and I’m sure she’d have liked to continue on for hours, but there were lots of other children who were to have sessions too. 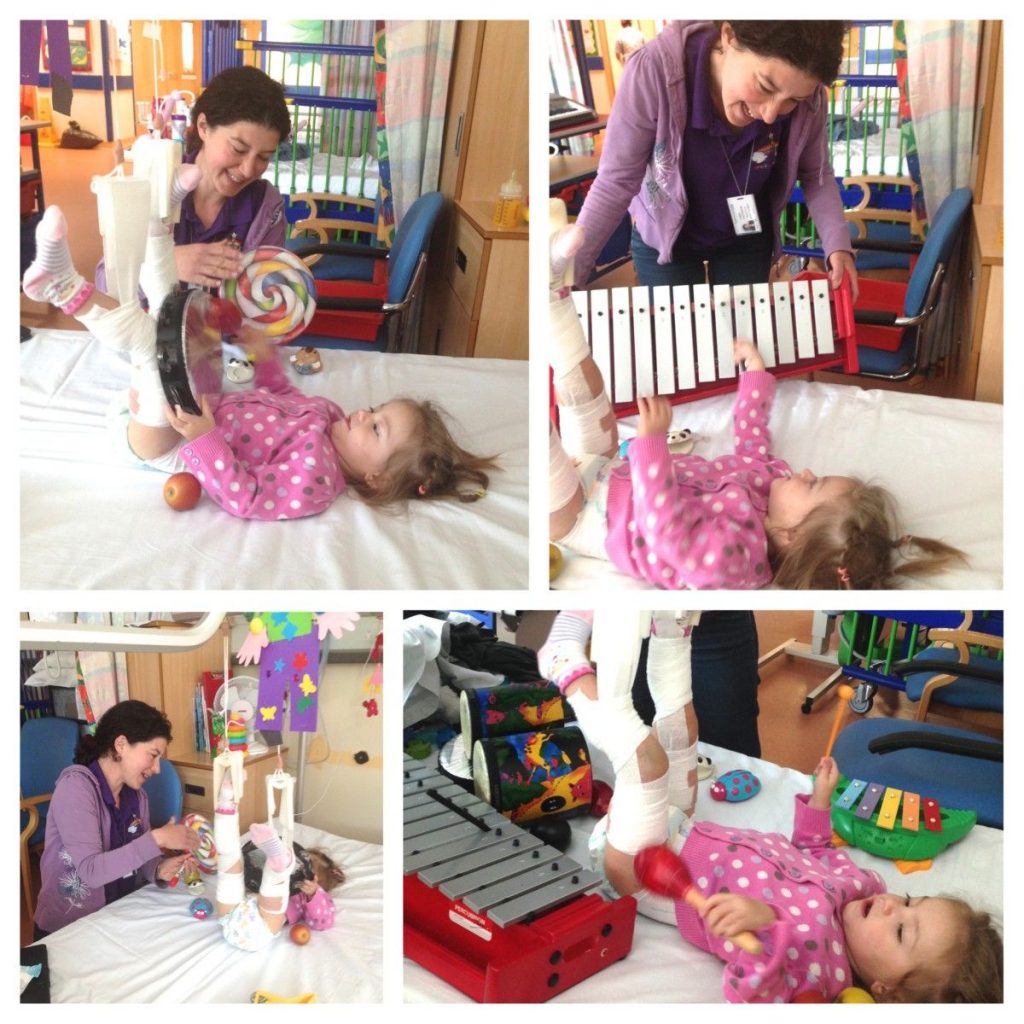 Another thing we tried was good old play-doh – but I must say I found that a little stressful!

Reason being, that poor Ella’s hair became so horribly matted where she was tossing and turning her head from side to side all the time, and so after a couple of the poor nurses there took 4 1/2 hours to tease her matted hair and to tie it up in mini French plaits, I was under orders not to mess them up! So you can imagine my horror as I saw teensy bits of bright yellow sticky gooey play-doh flying backwards into her hair it filled me with dread!!!

Ella even made friends with a gorgeous little girl named Anika. They particularly loved watching Frozen, Peppa Pig and squabbling over the sticker books!!

It was lovely though as it was probably rather refreshing for Ella to have some interaction other than that of me, Mr B and the nurses! 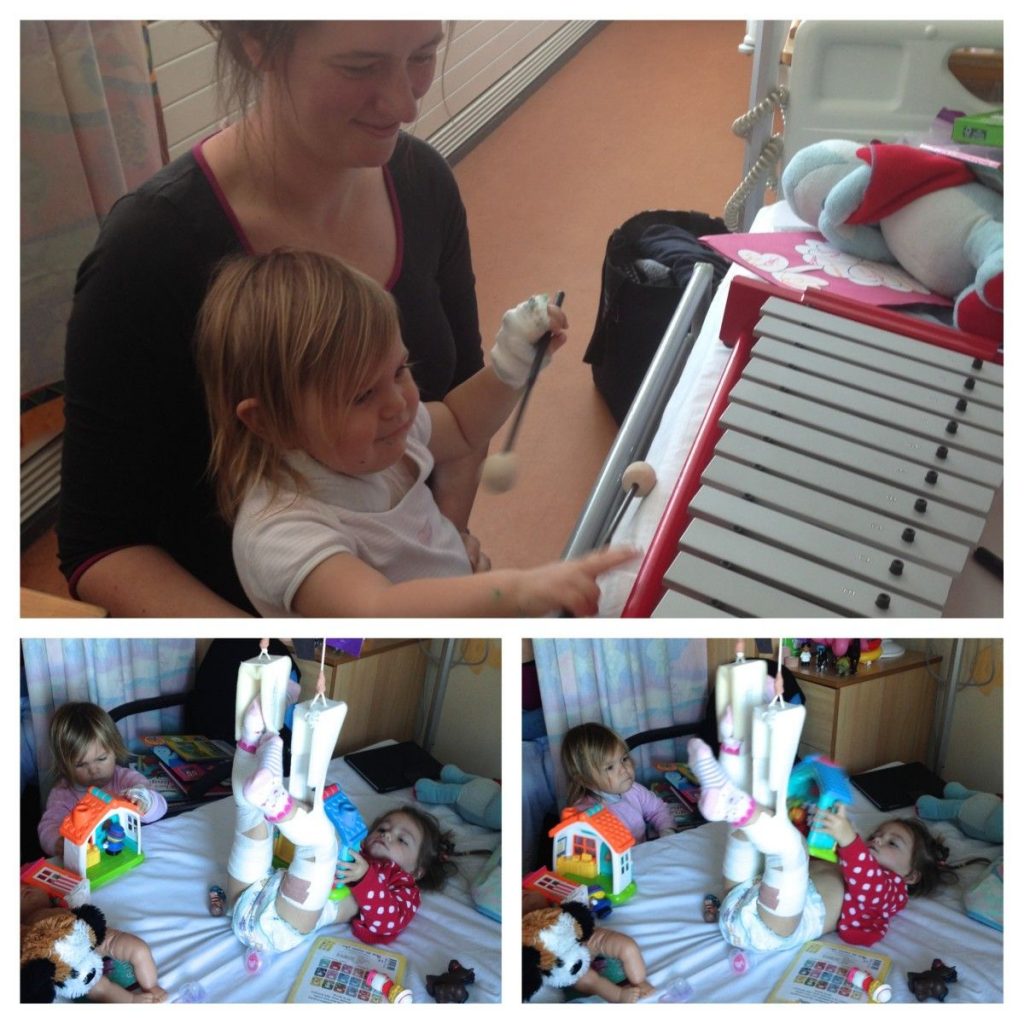 I also spent a small fortune on her myself,  and bought her toys and games which I thought might be ‘playable’ whilst led on her back.

This was tricky, believe me!

And, whilst Ella was happily and contentedly being entertained in her hospital bed, our lovely Holly was having fun with sleepovers, playdates and parties, which kept her as happy as she could be in amongst all the daily upheaval and mayhem.  She particularly enjoyed her pub lunch with her Aunty, Uncle and cousins! 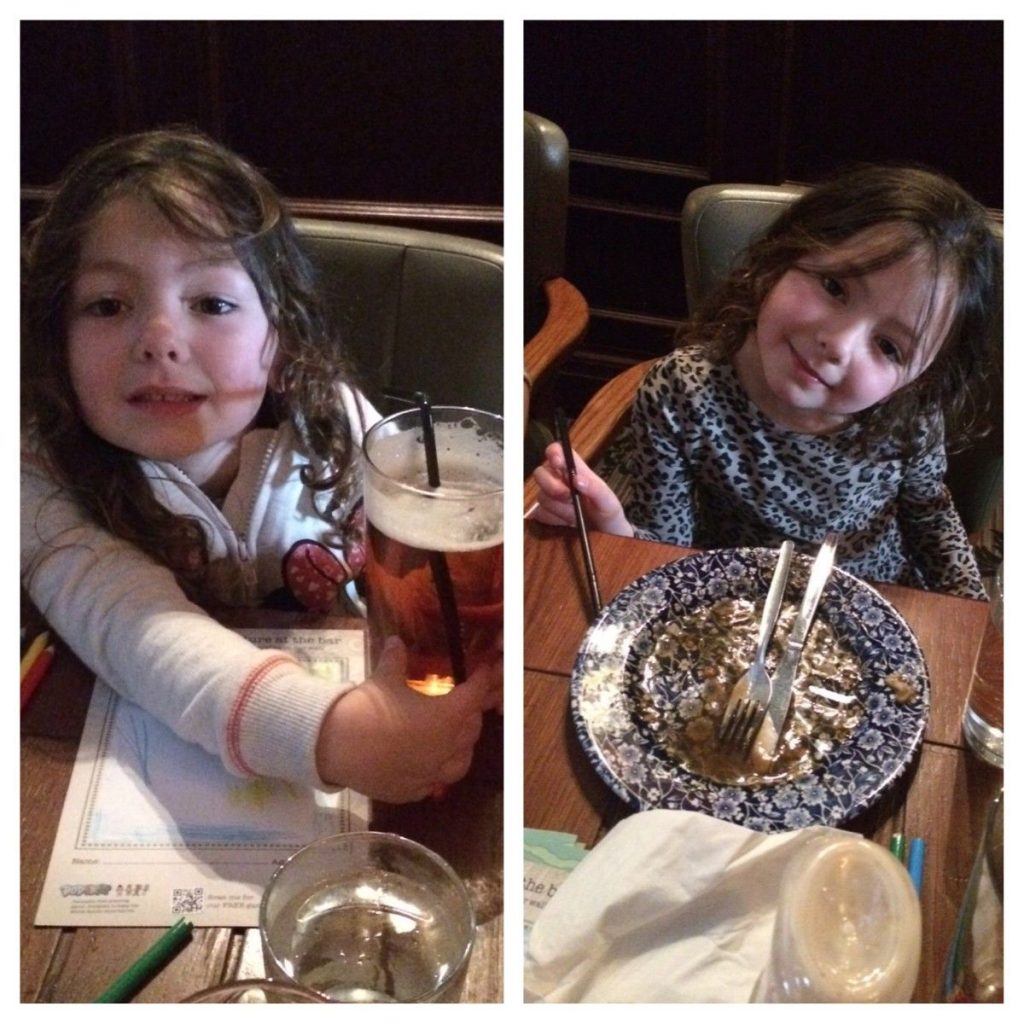 We felt so guilty that we weren’t able to spend as much time with Holly, and that each night one of us was missing, but we tried as much as possible to keep to her routine as best we could, but obviously, with the logistics of everything – this was certainly easier said than done.

She actually enjoyed her sleepovers with Grandma and Grandpa so much, that when I went to pick her up from pre-school the other day – she actually sulked and moaned that it wasn’t grandma!!

I always feel so guilty, so I for one made sure that all the time I spent with her was ‘quality time’ and we had lots of fun crafting sessions with a few treats sprinkled into the mix too! 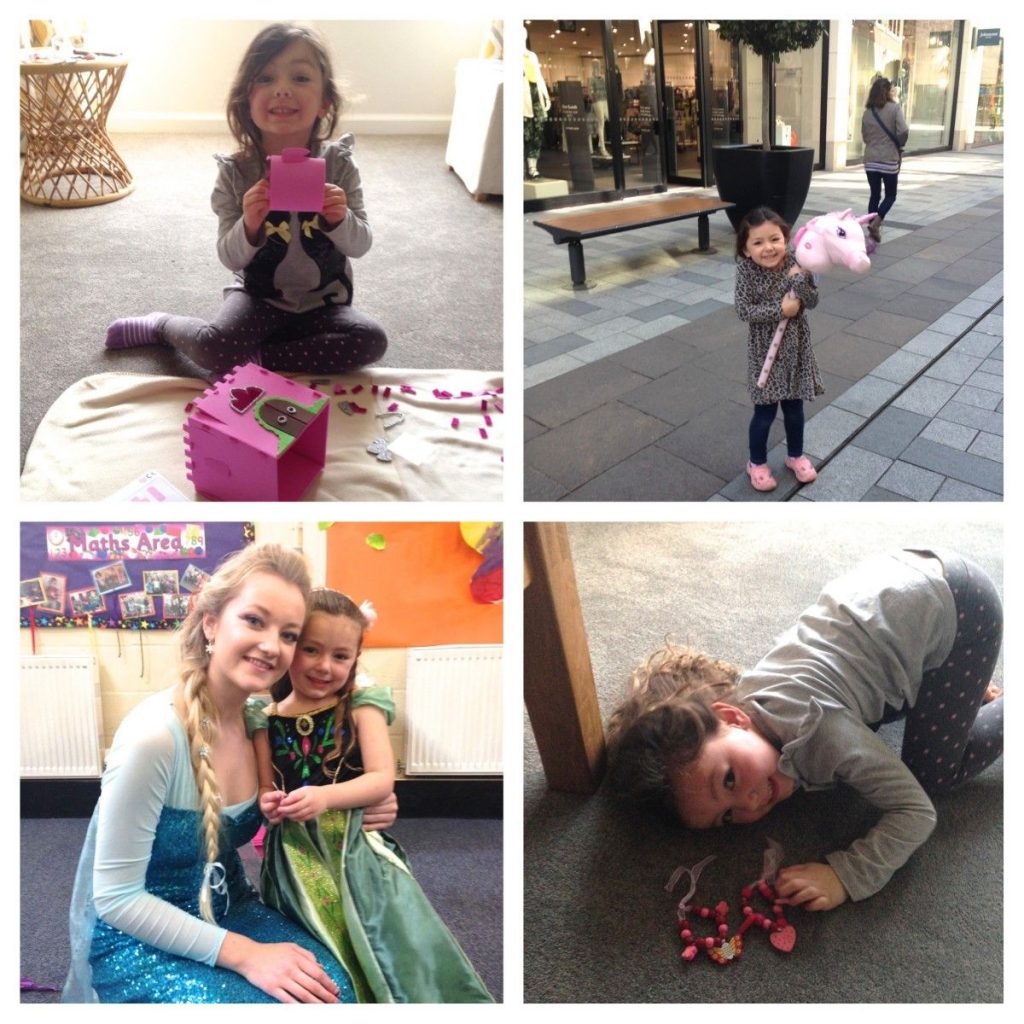