Actually I thought it was a good idea this weekend to change the words to this song ever so slightly and teach Holly to sing it to Daddy…..

(Holly approaches daddy and places his cap on his head……)

But Holly thought mummy was hilarious nonetheless, especially when we made up a little dance for him too!!

How wonderful was the weather this weekend! Totally glorious huh!

Don’t you think everything just seems better when the sun is shining? Everything is so colourful and sparkly, the warmth makes you feel all happy inside and you just can’t help but smile. It really makes a difference to your mood.

And everybody else’s mood for that matter. I often find that fellow pedestrians are happier to acknowledge you with a polite ‘good morning’ or a friendly ‘good afternoon’.

It makes me feel that the world can be a nice place after all.

So we tried to spend as much time as we could either outside or in the garden with the girls. (Though we did have our regular weekend chores. Yuk!)

We got up early on Saturday morning to take Holly on a special trip to the Disney store. We had promised her a few weeks ago that if she was a good girl and managed to complete her star chart, she would be rewarded with her first Disney princess doll, which she has wanted for a while now.

Although somehow we got sweet talked into buying her both Cinderella and Rapunzel!!! 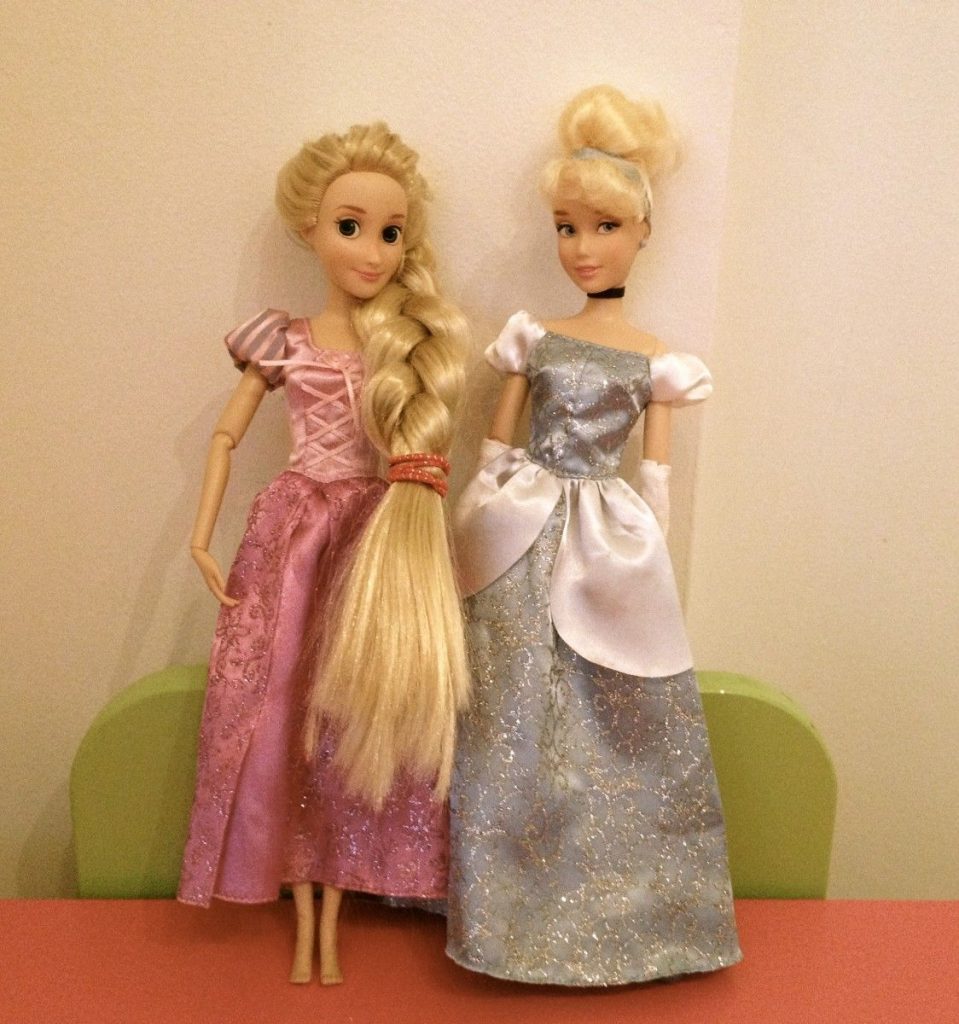 Hmmmmm! I get the feeling I was had a little there!

“Note to self: Must be stronger willed! I’m the adult who’s to teach our children the meaning of money, greed etc etc”

So, these were some of the tasks she was to concentrate on for the last few weeks:

– Helping around the house

– Putting away my shoes

– Clearing away my toys

– And my personal favourite….

– Not chewing or trying to eat my clothes!! (One day at nursery she got through three tops and two hats)

We returned home after that to busy ourselves around the house, clearing up and tidying to make it look presentable for a couple of good friends who we had visiting for the night.

Once both they, and my parents (the babysitters) had arrived, the four of us popped out for a really great meal at a local restaurant. The food was fantastic! So much so that I accidentally ate all of my three, very generously portioned courses!! My friend next to me even admitted to have had to loosen her belt slightly!! 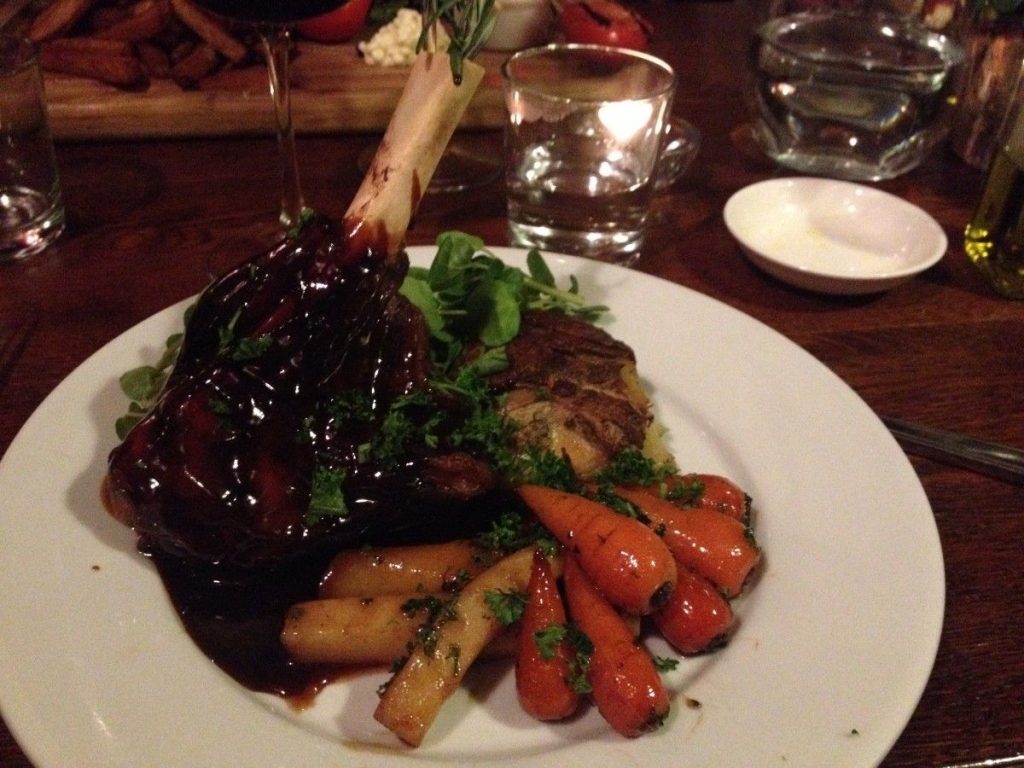 And the wine was yummy too. I didn’t even have a sore head when I woke up the next morning (which, take my word for it, is AMAZING and practically unheard of!!) perhaps it’s true when they say you don’t get headaches/hangovers from ‘good’ wine.

Brilliant!! Another thing to add to the list of my expensive tastes!

And to top their visit off, they were both delighted when we asked if they would be Godparents to Ella in June when we have a joint baptism for both her and Holly.  A later post, I am sure!

It was so nice to be able to put the washing out on the line without fear that when you come to take it in its actually wetter than when you put it out!!

So, I was hanging out the smalls, whilst Holly was bouncing contentedly on her trampoline. Although, it took me forever to zip up the blasted thing! How tight are those nets!!!

And just as soon as I’d zipped it up (and practically wiped the sweat from my brow!) did Holly then announce that she needed a wee!

This happened twice no less!

Luckily, unzipping the netting was far easier than zipping it up; as I don’t know what it is about kids, but there always seems to be such a sudden urgency to need a visit to the toilet!

It’s not like they start to get the feeling that they might need to go soon; oh no! It just seems to come out of nowhere.

So much so that Holly always announces she needs the toilet, then exactly one second later says in a panic,

You’ll be glad to know though that (nine times out of ten), we make it just in time!!

So once Holly had finished her gymnastics session, Daddy came outside with Ella and we played with a pack of bubbles. Holly loves to chase them as they climb high into the sky. 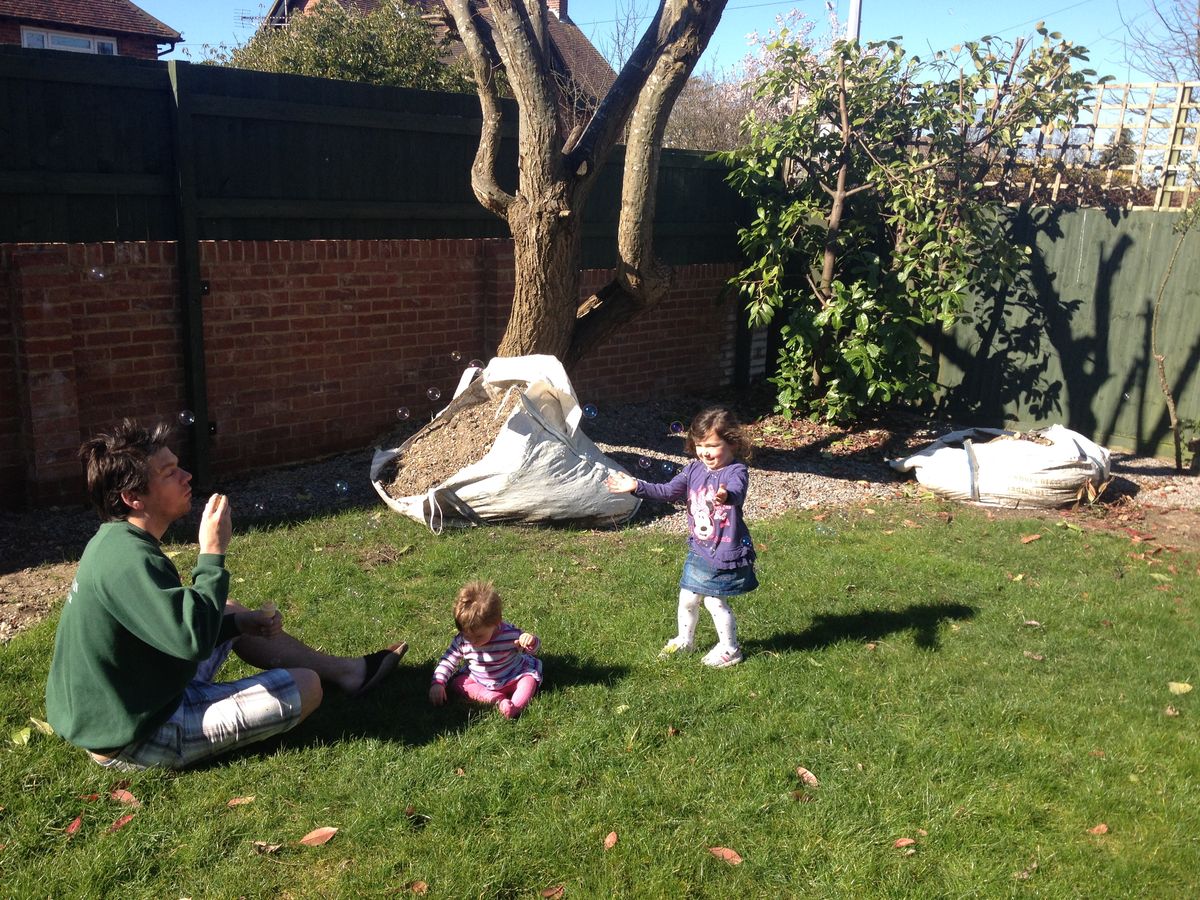 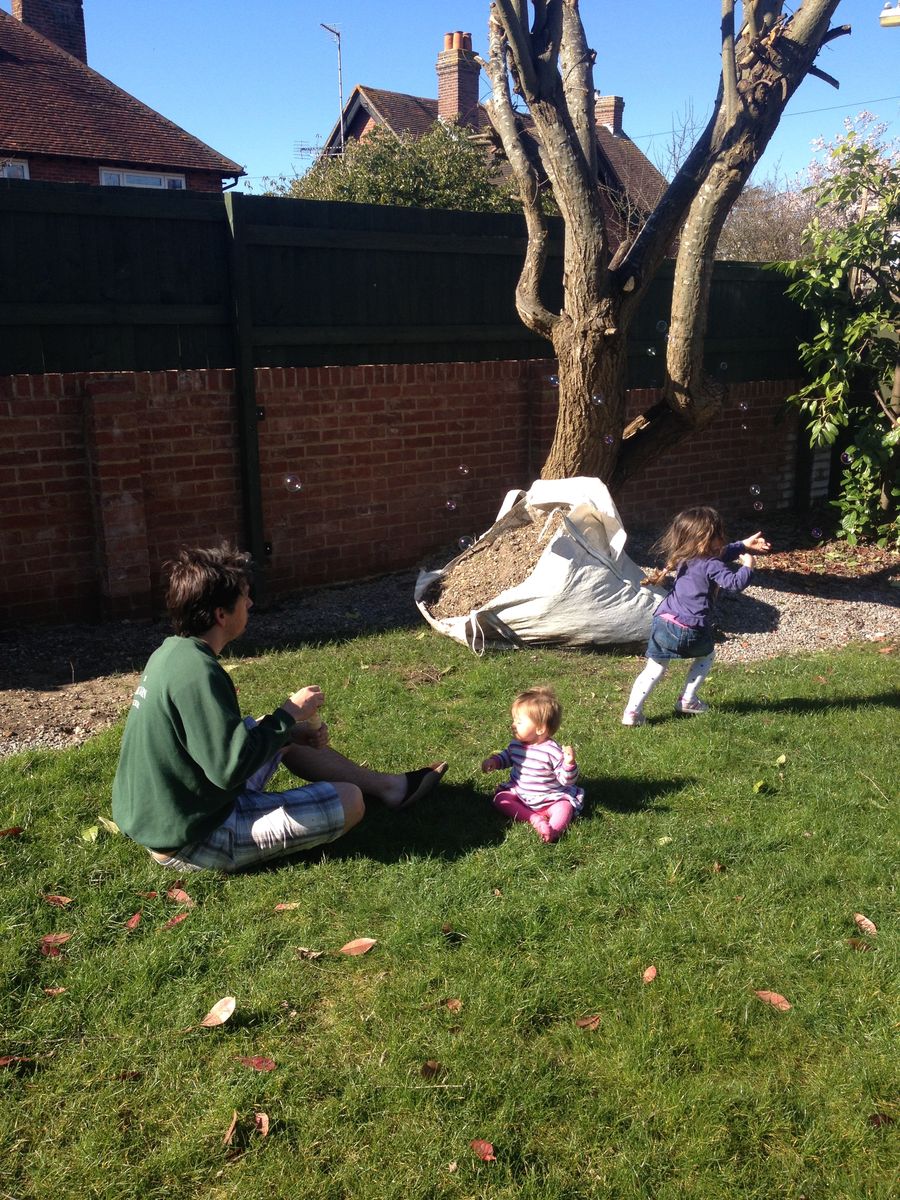 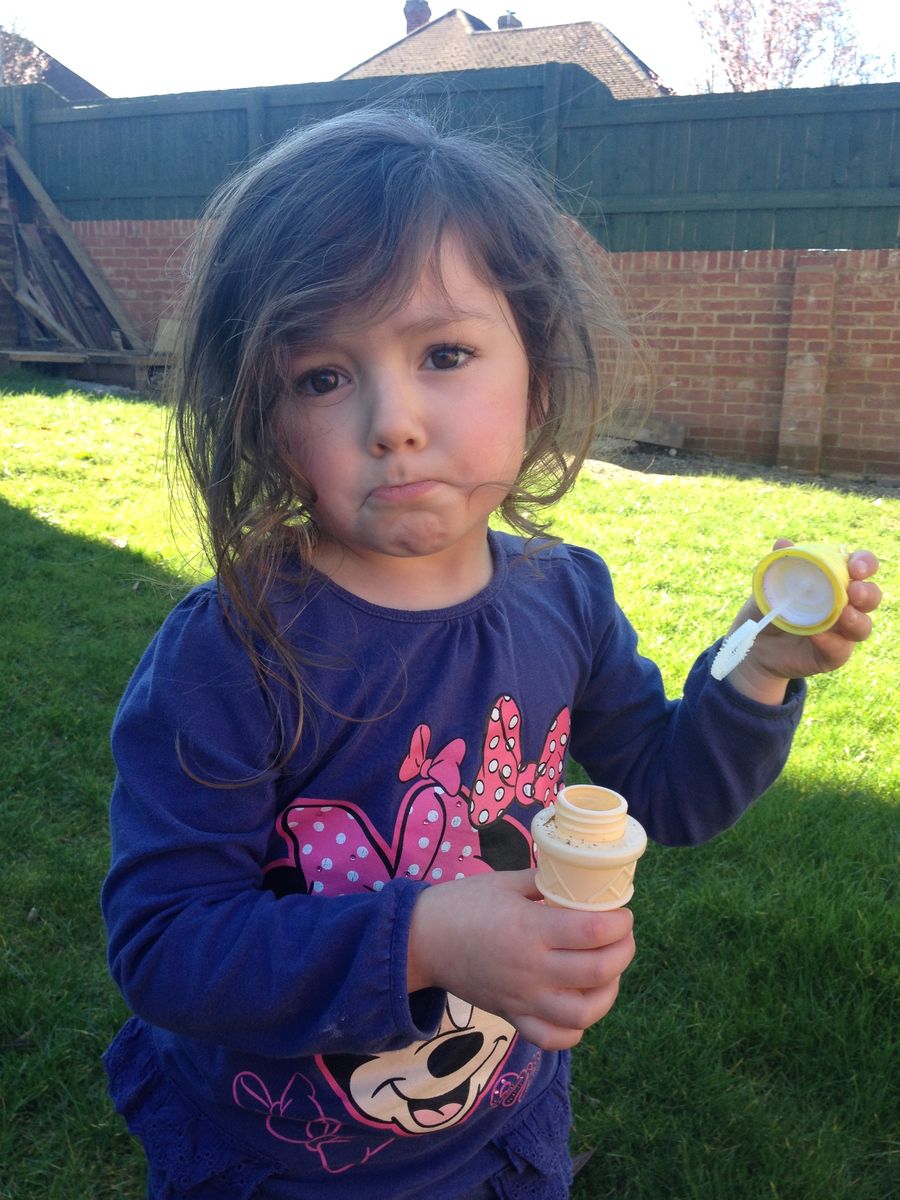 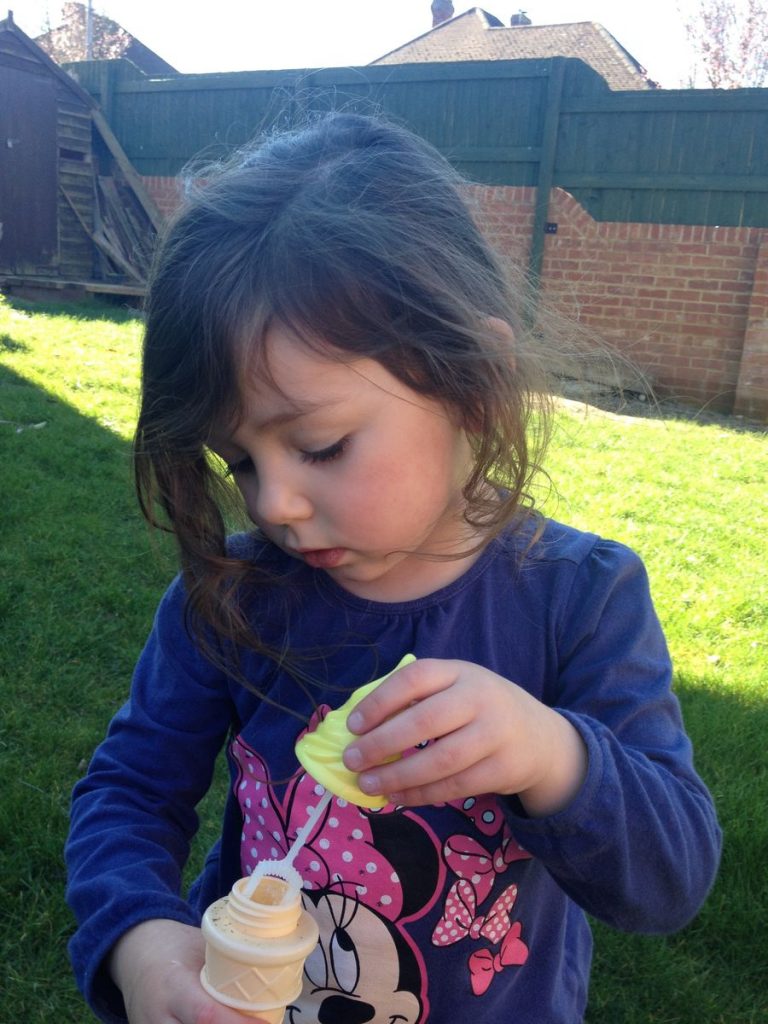 I say mesmerised, well she was, although most of time she was more intent on trying to eat anything she could lay her hands on…. leaves, sticks, stones, insects, bird poo!

So, after a slow and leisurely day again on Sunday of doing housework, painting and playing in the garden, we sat down to a fabulous home cooked roast dinner (hubbie has this off to a fine art now, especially the pork crackling – which again doesn’t help with the weight loss!) and after finishing it, realised we were probably still full from the meal the night before, and now just needed to be rolled around the house!!

So we decided to walk off our lunch and took a lovely stroll across the park to visit Grandma and Grandpa for a quick cuppa.

I pushed Ella in the buggy, while daddy pushed Holly on her bike (it has one if those handles on the back) And then promptly stopped pushing Holly on her bike as he got too frustrated that she wasn’t steering or pedalling properly!!

I just chuckled to myself. I had tried to push both Ella in the buggy and Holly on her bike at the same time the other day! Total disaster! I think Ella was the only one of the three of us who didn’t throw a strop!!

Poor Grandpa has recently had surgery on his toe, so he’s feeling very sorry for himself as he likes nothing more than to potter around his garden or adjust his pond!!! And poor Grandma, as because poor Grandpa is frustrated and bored; she’s now the one being instructed what to do in the garden, what pots to move where, which plants need extra water etc. 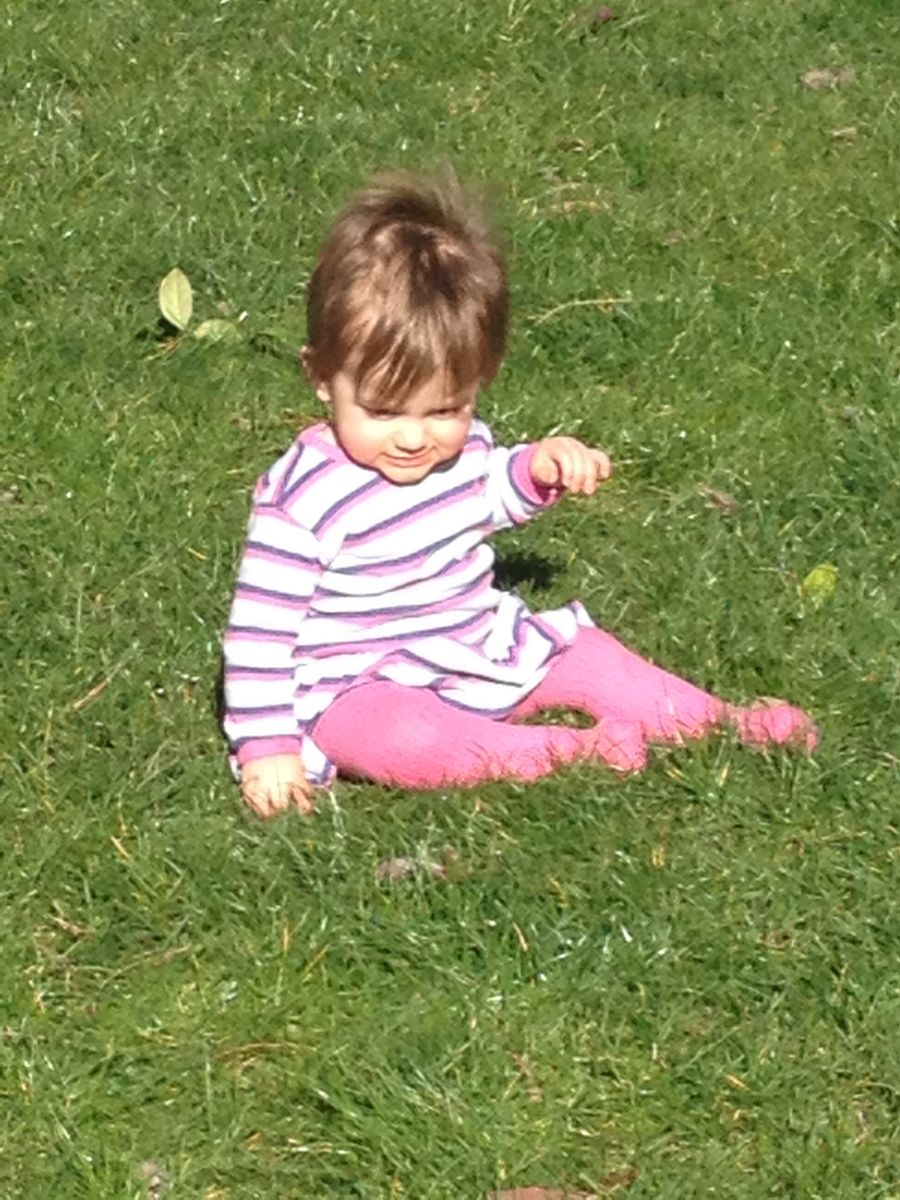 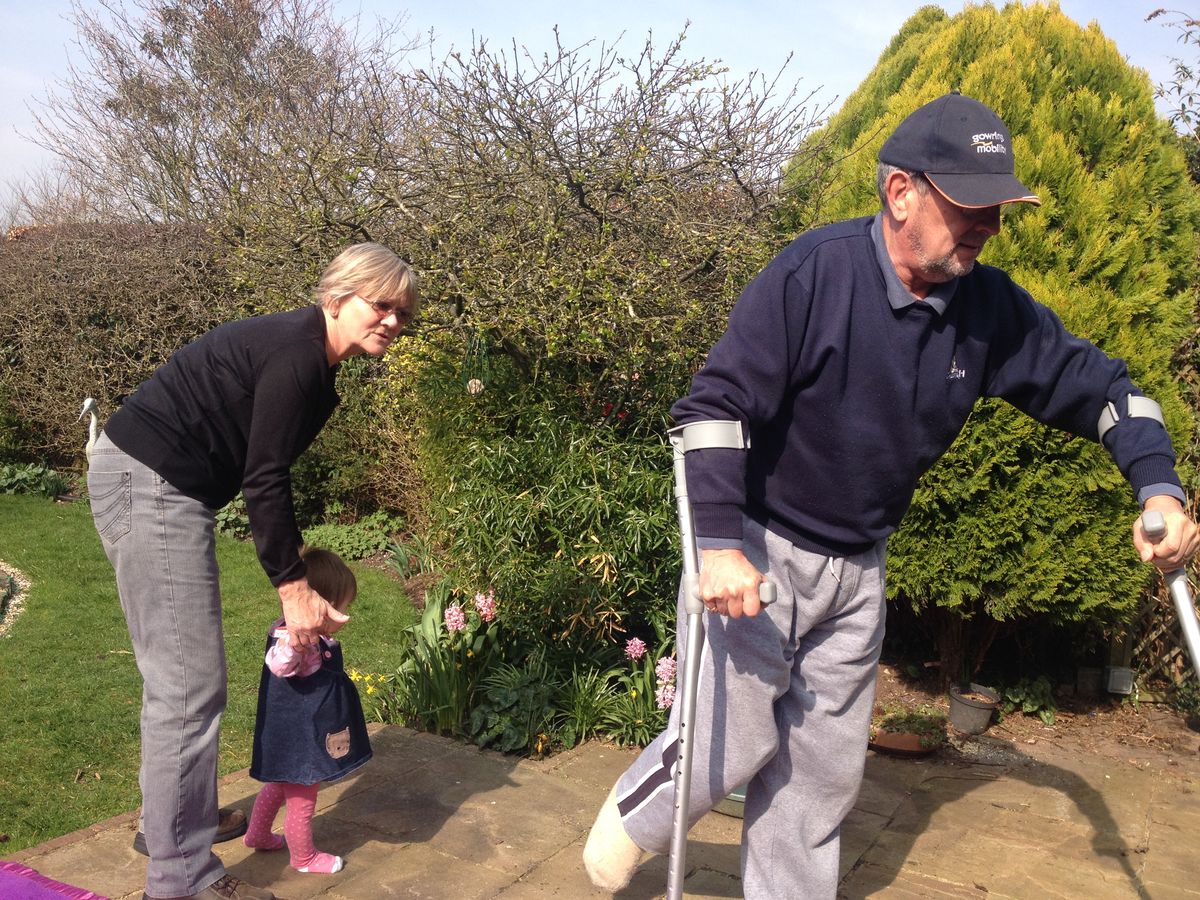 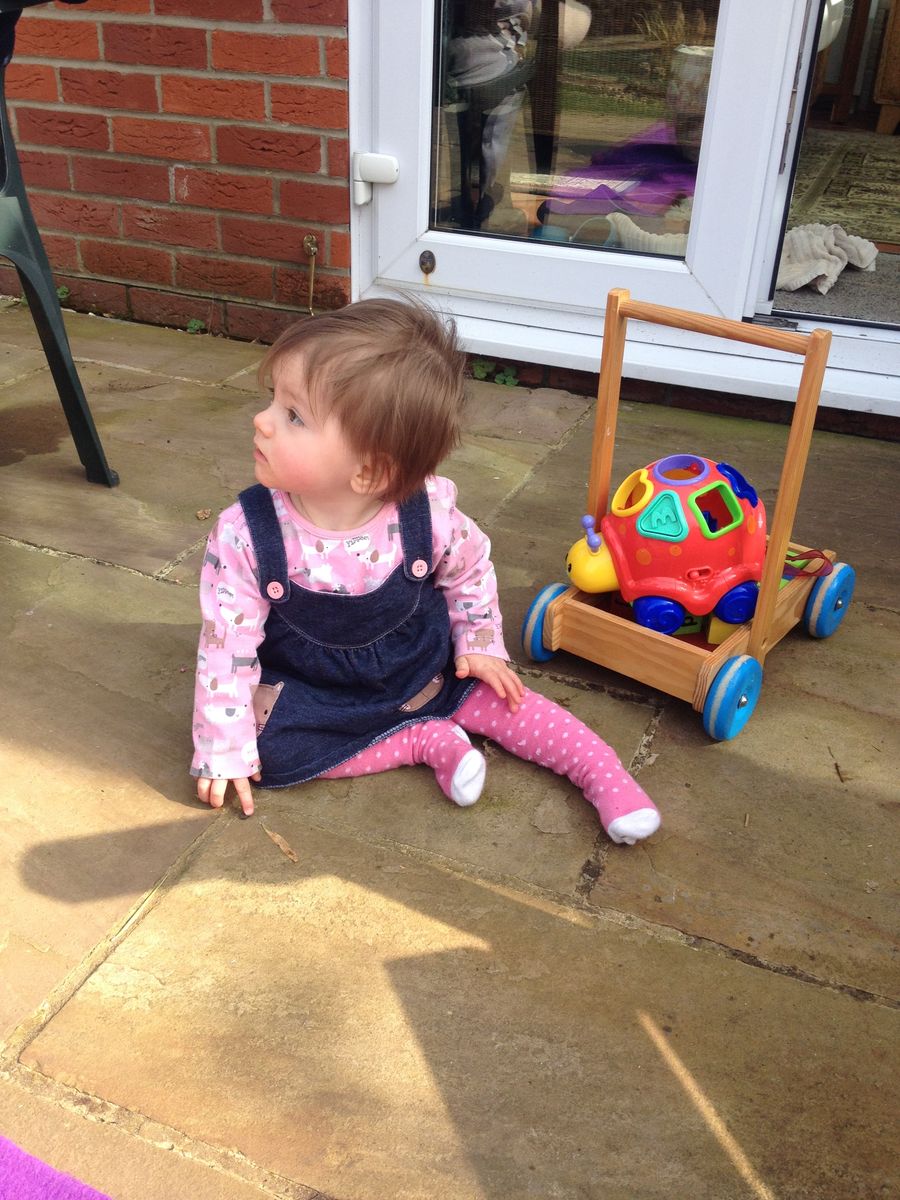 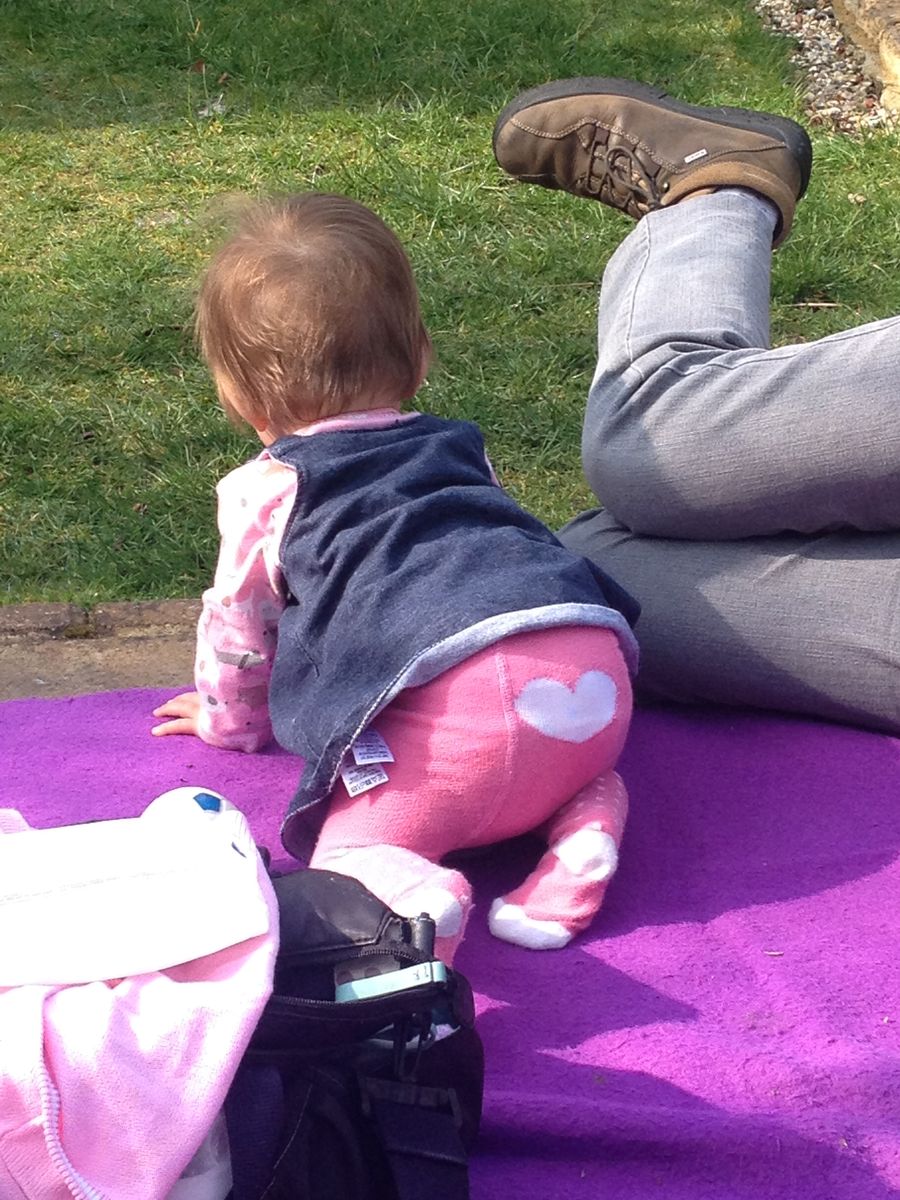 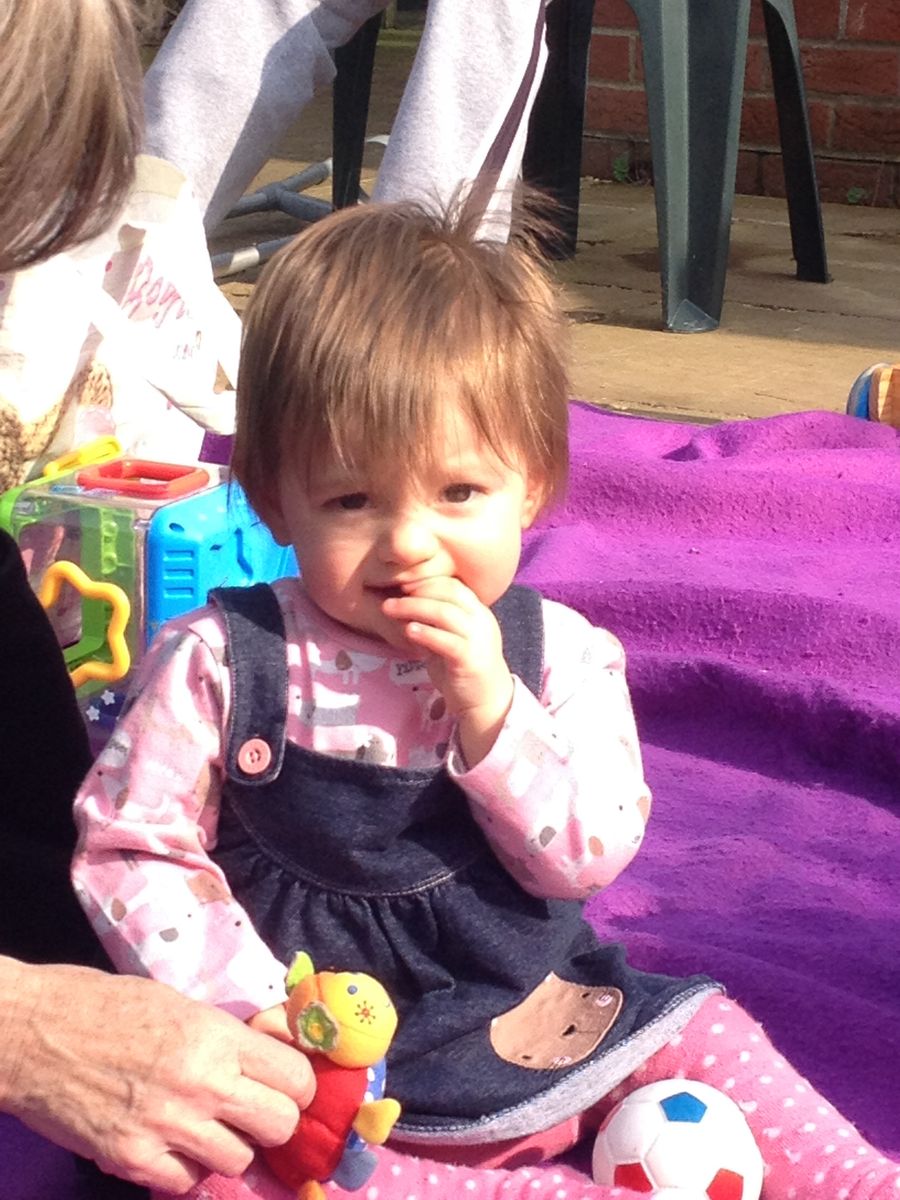 Actually when we popped over this afternoon she was in a bit of a sulk as her next chore was to create a wormery!!

Then, once the sun had gone in, and the air became a little cooler it was bath and bed time for the girls.

And just before bath and bedtime for us, I decided to learn sugarcraft! Ok, so not exactly ‘advanced’ sugar craft, but I was pleased with my efforts.  Ok, so I only had green icing instead of black etc, and cardboard for the wings, but you get the idea – and I did only rustle it up in about a minute, so I promise more time will be spent on the real things!!

You see, it’s Ellas birthday in a couple of weeks and I’ve decided upon a bumblebee cake. I had originally wanted a toadstool cake but I’m saving this theme for a later birthday now as I’ve spotted some fabulous ideas online!! 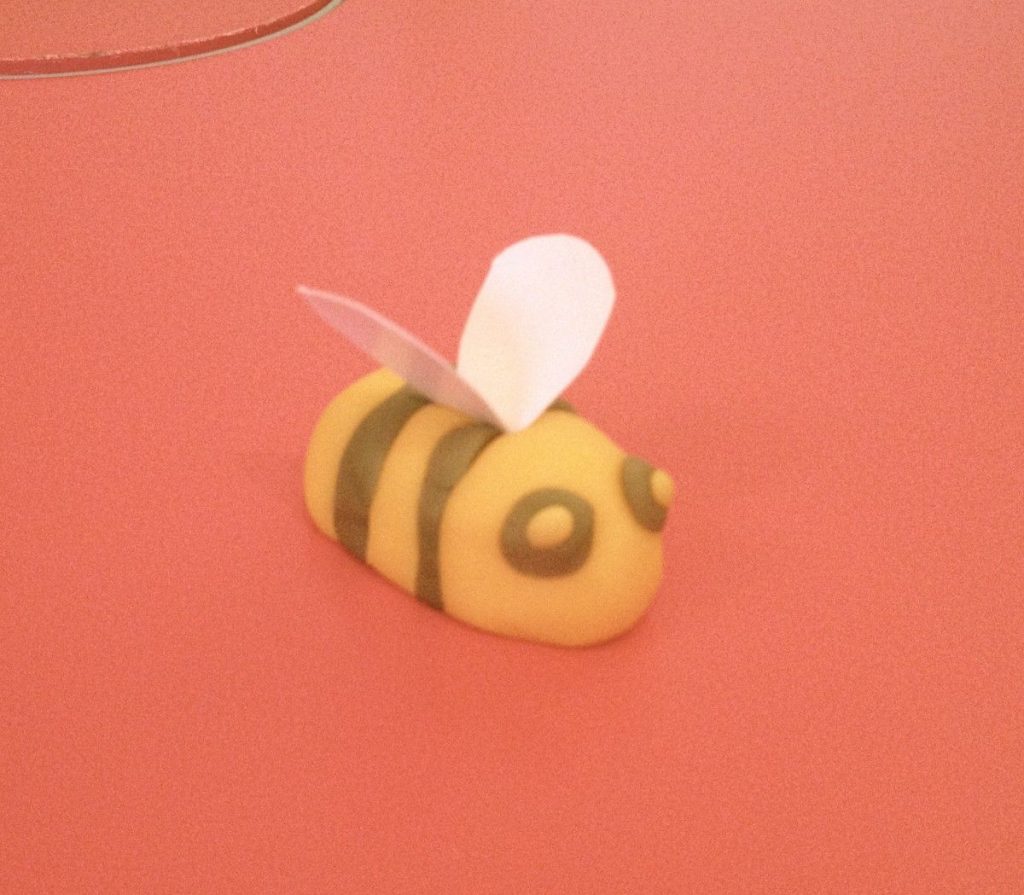 Anyway, I was looking on the web for bumblebee cake toppers and stumbled upon an online lesson. Suffice to say, I’ve now decided to save some pennies (the pennies count at the moment with me being redundant) and make my own.

If you haven’t seen them, look them up. They’re hilarious!!!

My personal favourite is the hedgehog!!