So, following on from my last post, A Summer Wedding in Bordeaux, I thought I’d show you around our own accommodation, where Mikey, I and a couple of friends stayed in for the long weekend.

To say the Chateau De Lavaud was beautiful, was an understatement.

At first we found it rather tricky to find, and certainly did a tour of a fair few gites, farm buildings and the odd old style industrial estate, but in the end, good old Sally Satnav found just where we were meant to be.

Having seen the pictures of the chateau on their website or via Google images, I was so excited to see it for real. And it didn’t disappoint.

As we drove through the main gates and along the driveway, the dense trees became sparser to unveil the most exquisitely perfect and typically French chateaux. Nestled slightly higher up on a hill and complete with turrets, it was like something out a fairytale. 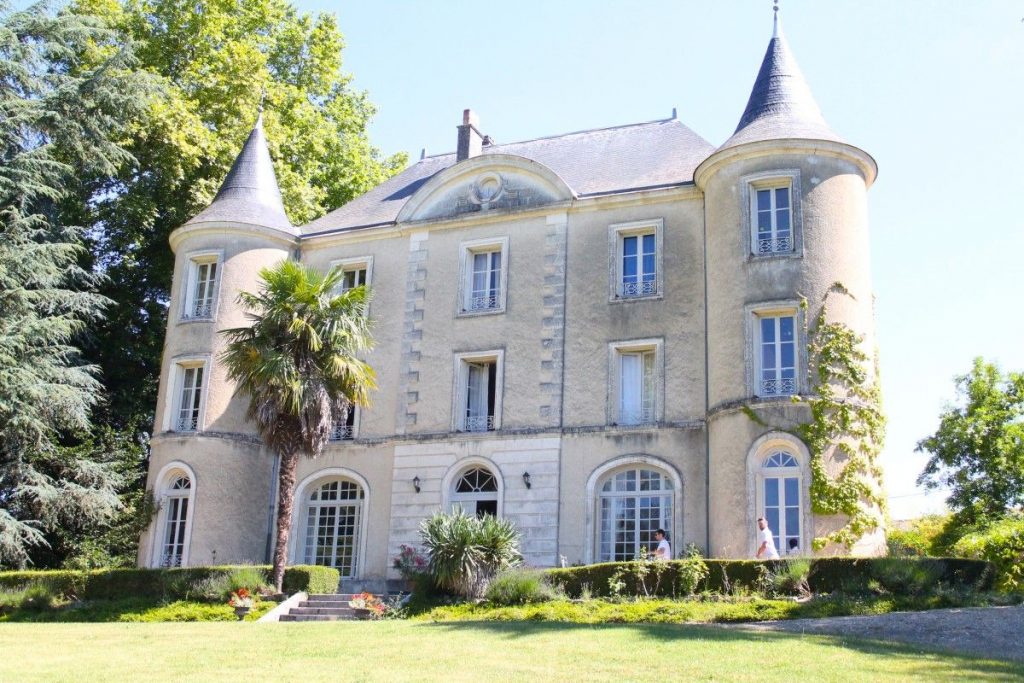 We had arrived a little early, which although was fine, normally is not suggested as they are only a small, family run B&B who strive to offer their guests the best service possible and would therefore not normally have rooms ready whilst they were adding all the final finishing touches. But in this instance, and luckily for us, they were ready.

Mikey and I were shown up the old wood and iron, winding staircase to our room on the first floor, which unusually lucky for us was the suite. It was a large room. Grand, though not overtly opulent with period features such as dark wood furniture with ornate handles, original floorboards and beautiful wall coverings, tapestries and chandeliers. 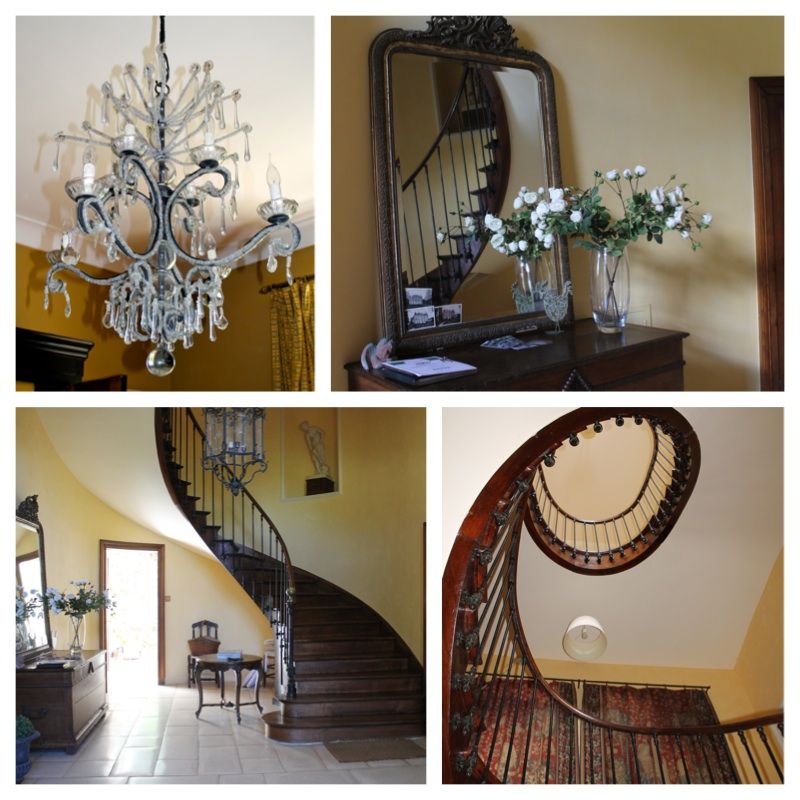 Our room looked out through large, floor to ceiling sash windows of the front of the chateau and down across the lawns to the lush green countryside beyond. It even had a study – in the turret!

My girls would absolutely have loved this. 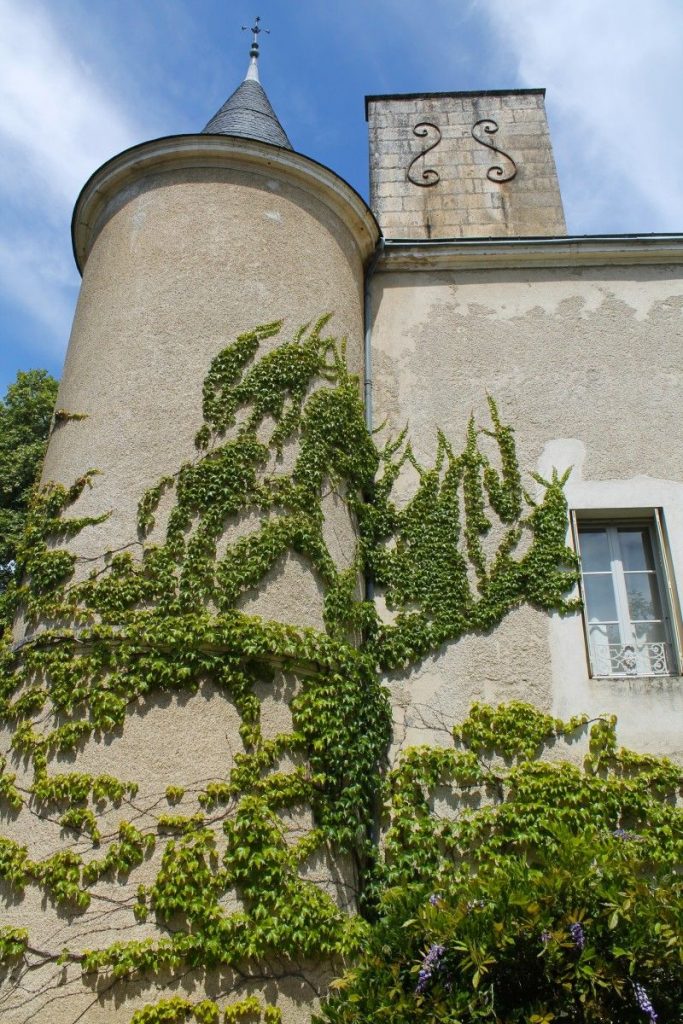 Our friends were also shown over to their room, to the rear of the chateau, though it was still attached to the main property. Their room was smaller, but was equally as beautifully decorated, accessorised and faultless.

The chateau owners I think had met or spent time in Tunisia a long time ago, he from the USA and her from France, so they had decorated the rooms with hints of their past and as such an eclectic mix of French/Tunisian décor has been achieved in a really very tasteful way.

And, located just outside of these rooms was the swimming pool. It was of a really good size, and was just perfect to laze around, with a drink in hand, a good book in the other and not a care in the world.

At least for a day or two anyway. 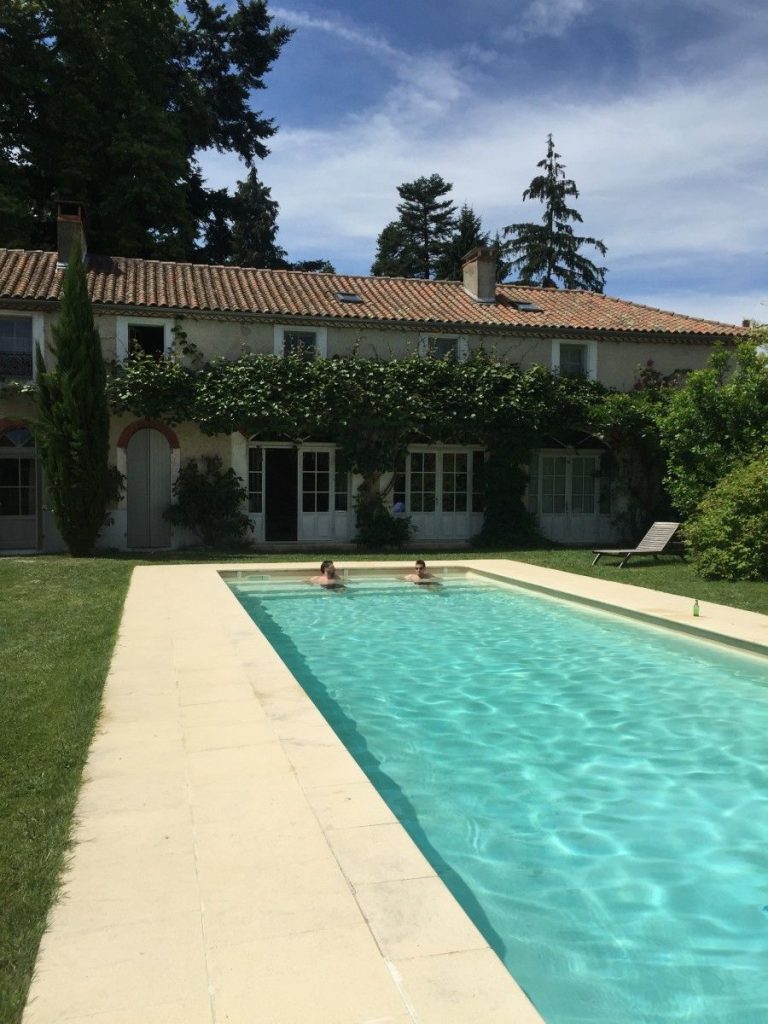 The boys (well, our husbands to be precise though ‘boys’ still sums them up) were acting like big kids and playing pool games, whilst my friend and I just chatted and soaked up the suns rays on our loungers.

We were so lucky with the weather too – it was scorching. So the cool, unheated water of the pool was a rather welcomed part of our stay.

One of the main things I noticed whilst there (other than the two idiots in the pool) was the stillness and undisturbed quiet of the countryside. With no children asking and nagging at us every second for a snack, for us to entertain them or to announce that their sister just pushed them over it felt pretty bizarre and totally peculiar to me.

I actually had time to flick through the pages of a magazine, only stopping for the odd loo break, because I actually wanted to go myself! It was such a treat!

The gardens were sublime too. Not manicured to within an inch of life, the lawns were natural, with slightly overgrown bushes and shrubs bordering the grounds and old walls of the outbuildings. Dotted amongst these were strikingly bright flowers housed in timeworn urns and ornamental hanging baskets, and a trail of green ivy climbed the turret walls. 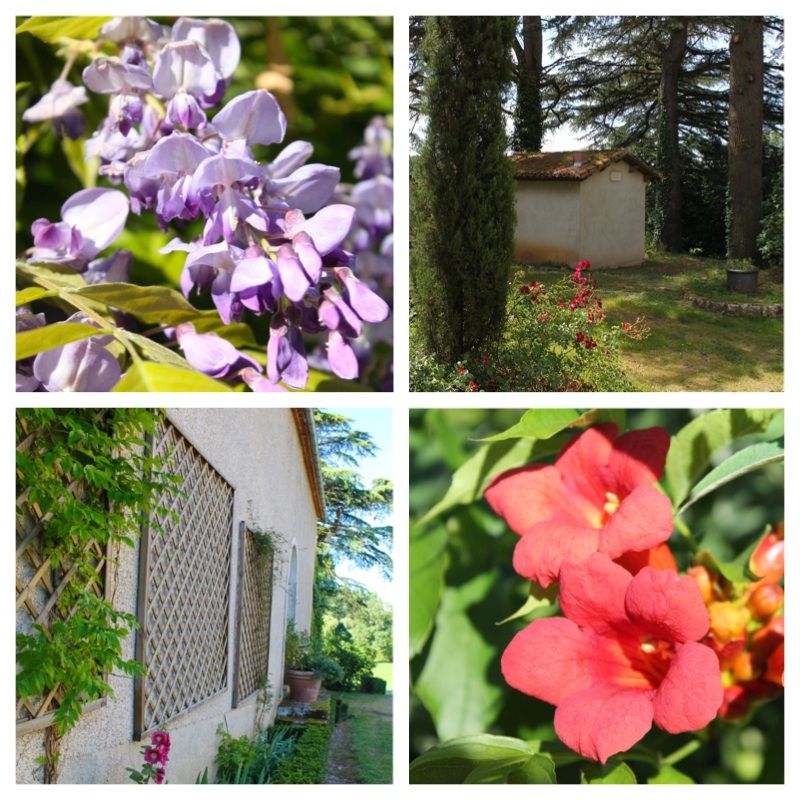 Each morning, sat under an early but warm sun, an exquisite fresh breakfast was served to us on the terrace beside the pool. Consisting of hot buttered croissants, freshly baked breads, homemade jams and preserves and even a different cake made each day from fruits collected and gathered from the chateau grounds. 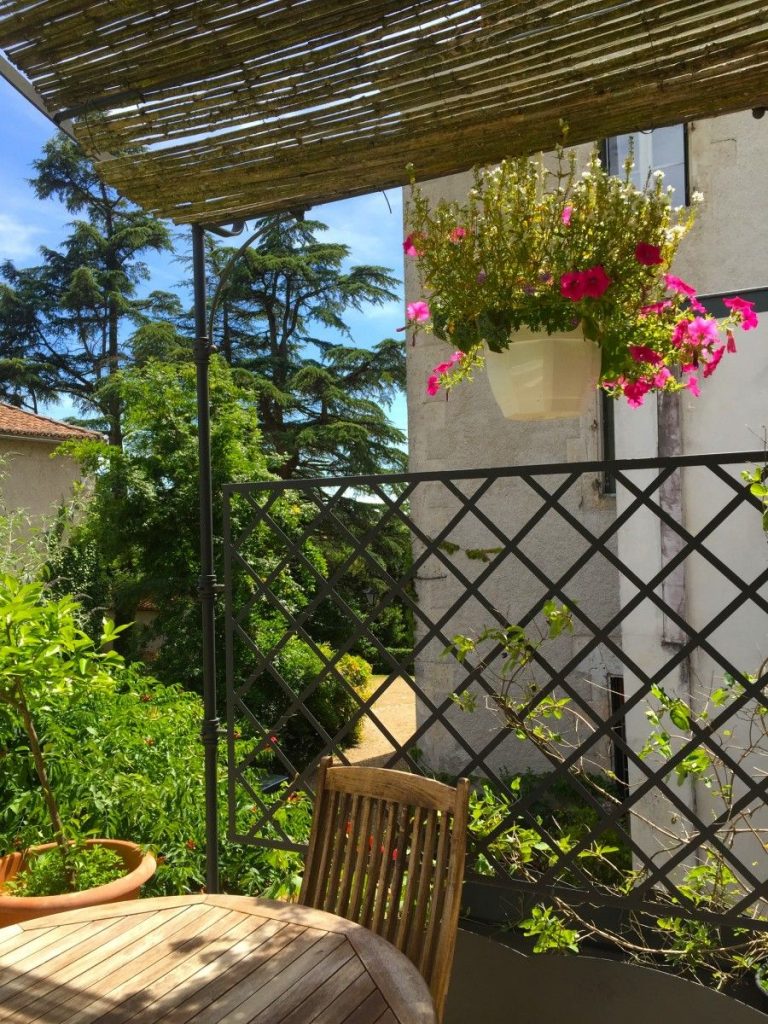 It was so perfect and relaxing to just sit there, waking up slowly from a lovely long and uninterrupted nights sleep. Steadily coming around with an uplifting cup of fresh tea, listening to the birds and chatting with fabulous friends about what we could do for the rest of the day. 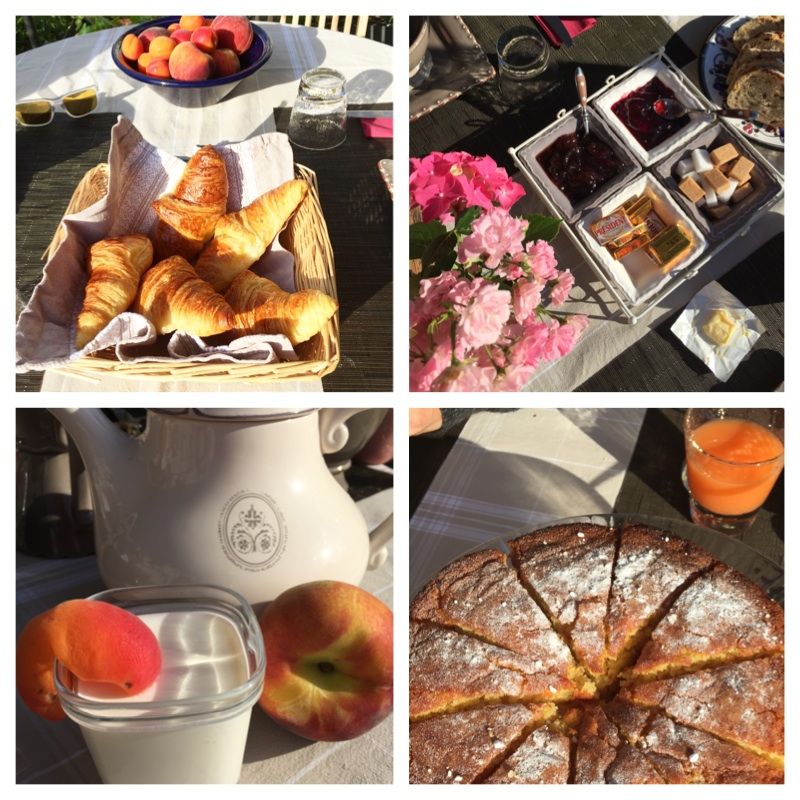 It was just fabulous.

And completely and utterly what we all needed. 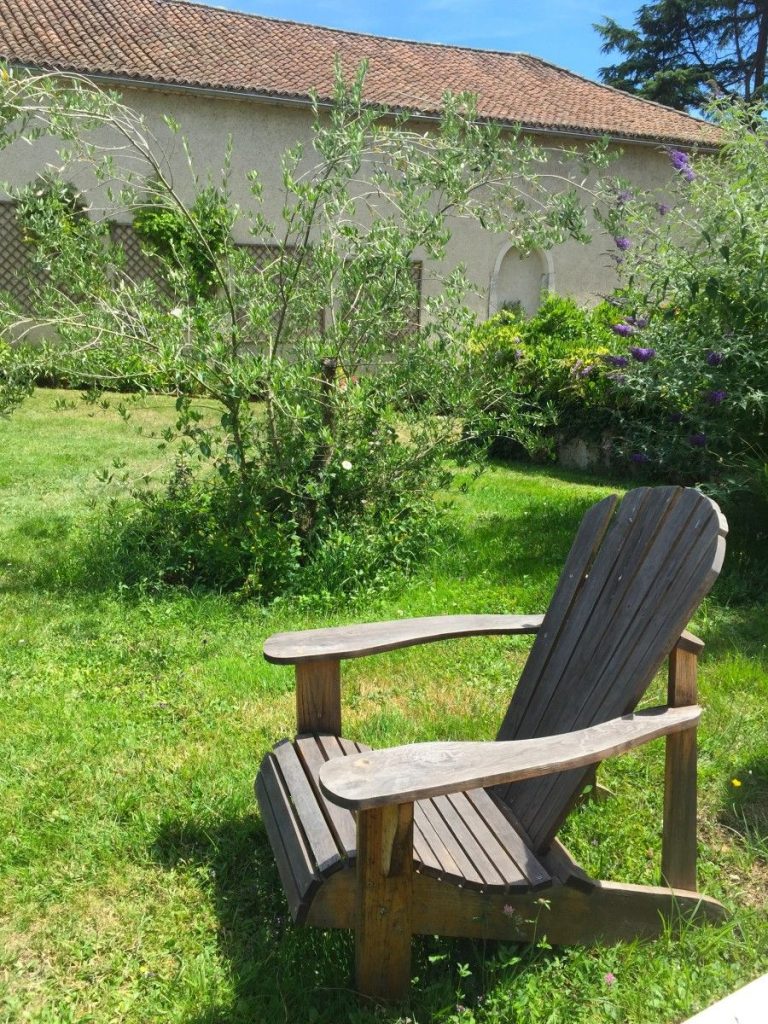