This is actually one of my (many) little quips or sayings that my husband, friends and family have had to endure on a daily, weekly (hourly) basis, from me, as they seem to slip into practically every sentence, but in this case I’m going ahead and using it again anyway!!

H was born back in October 2010 and it had always been the plan to have her christened, basically because we are both ourselves christened and we felt we wanted her Christened too!

Though with all the toing’s and froing’s of our busy family members who we chose to be Godparents, the christening never really was able to take place as the church was only really able to provide us with dates relatively close in the future, all of which each time had already been booked for other events, holidays etc by the chosen few.

So, with this, once E was born at the beginning of last year, I made a last ditched attempt to arrange a date where everyone was free and could join us, and in this instance, hooray – everyone was available so I quickly booked it and told everyone to save the date in their calendars!!

So we decided to do a joint christening for both of the girls, which in the end turned out rather well.

This was great for a number of reasons, not least for the amount of money saved. Catering and throwing parties can get rather pricy don’t you think?

For the last couple of months now we have been drip feeding our wine rack each week with a couple of different wines, Proseccos and champagnes as the deals came and went in Sainsburys, and Mr B bulk bought the beers when he spotted similar offers!

I practically did the rest.

Organised the décor, the outfits, the guest list, liaised with the church, wrote and sent the invites, decided on the food etc etc – you get the gist 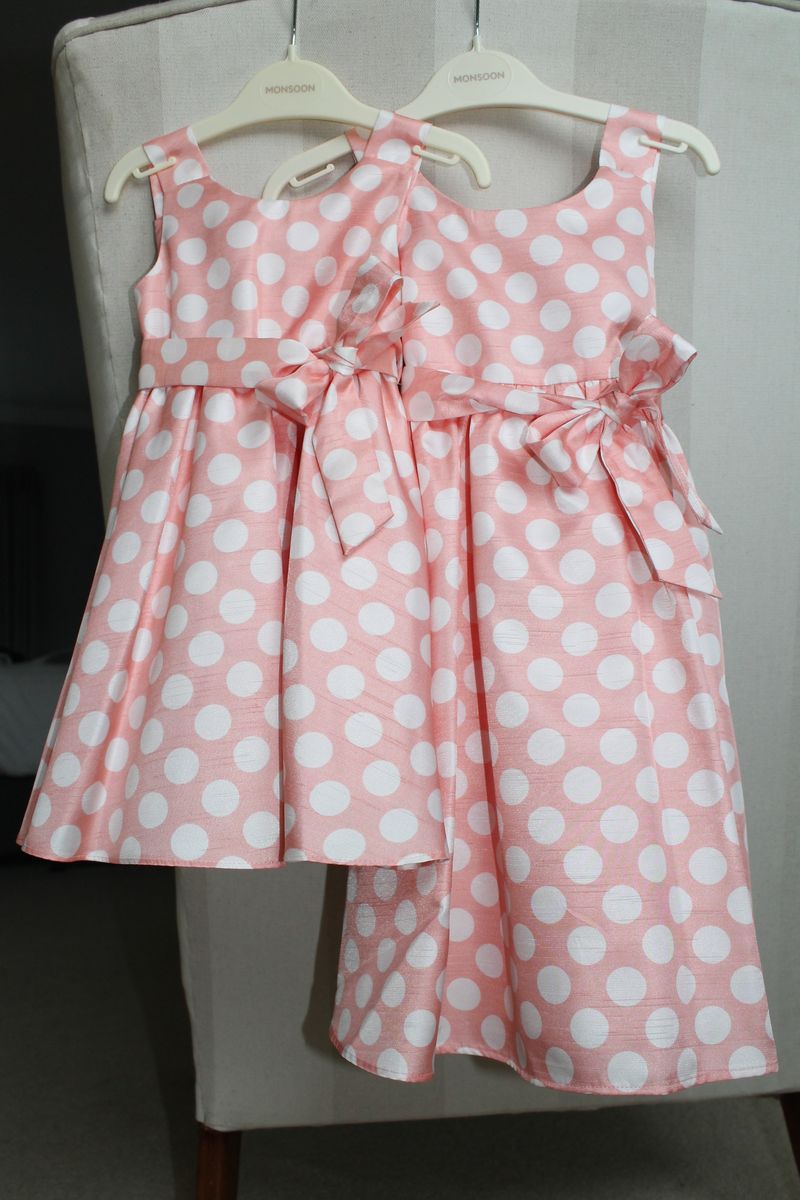 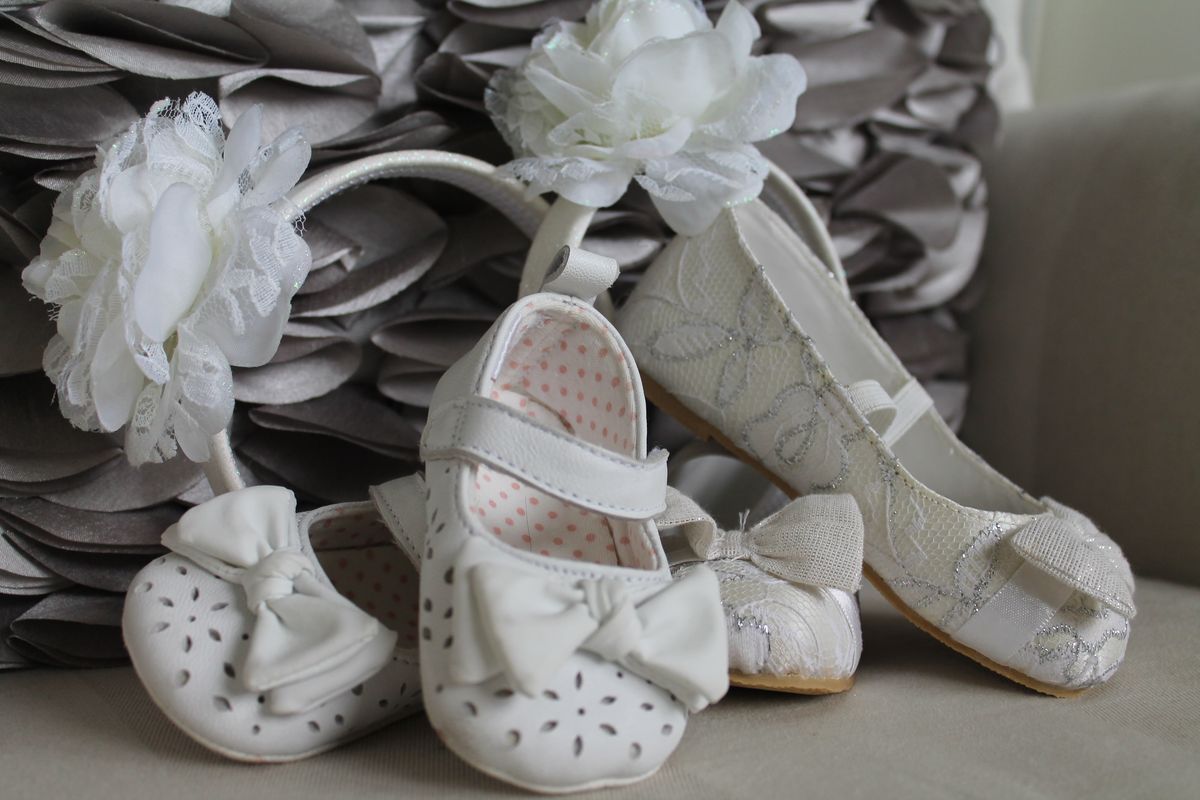 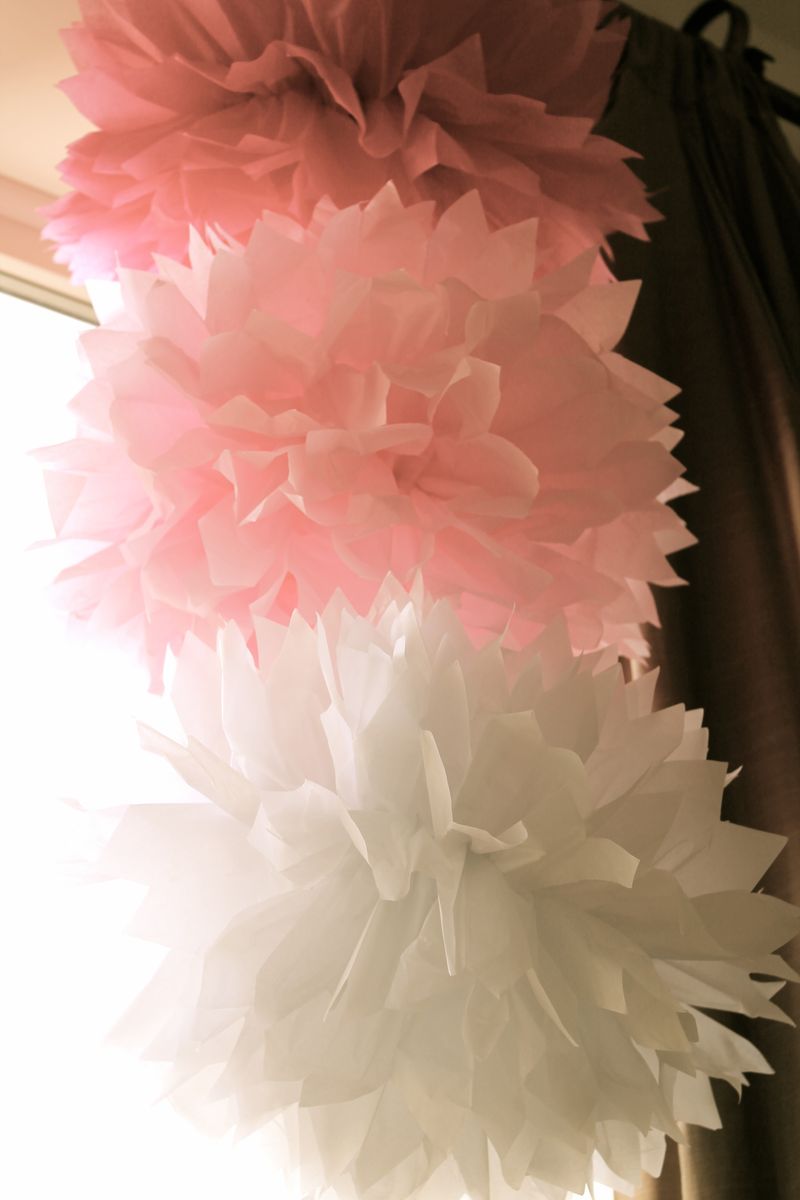 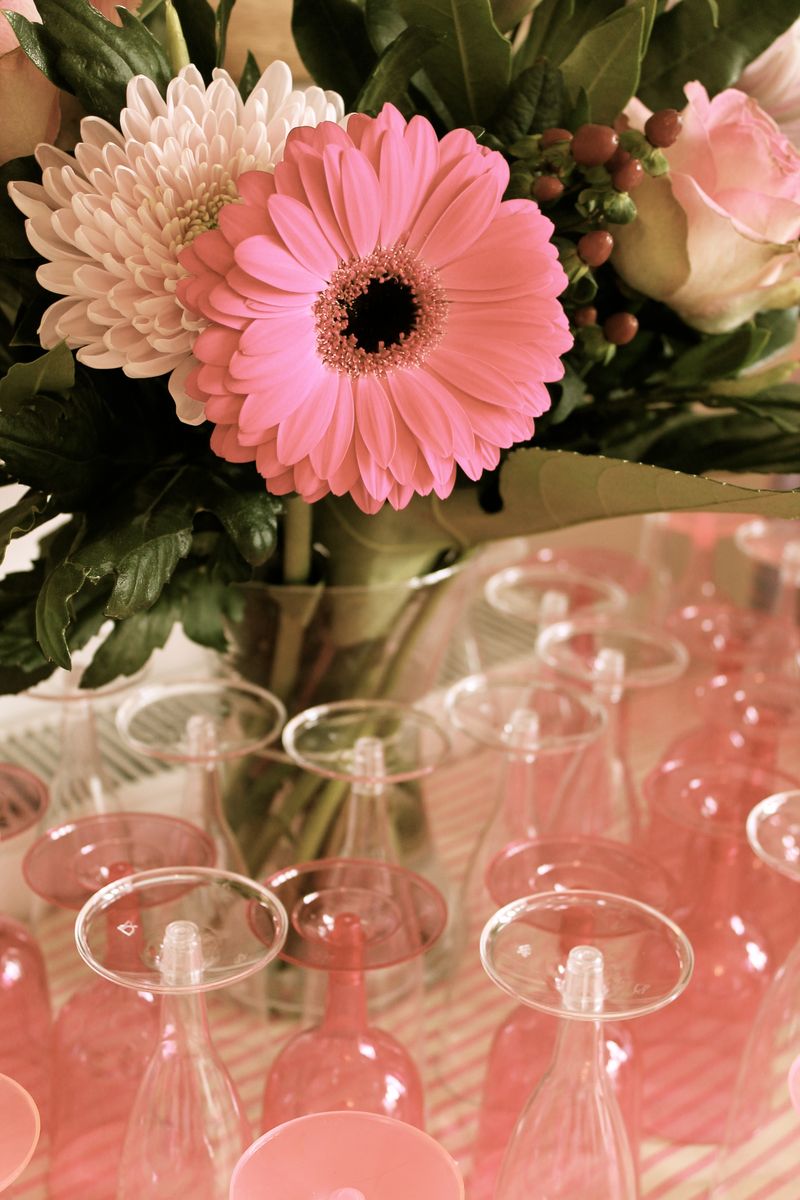 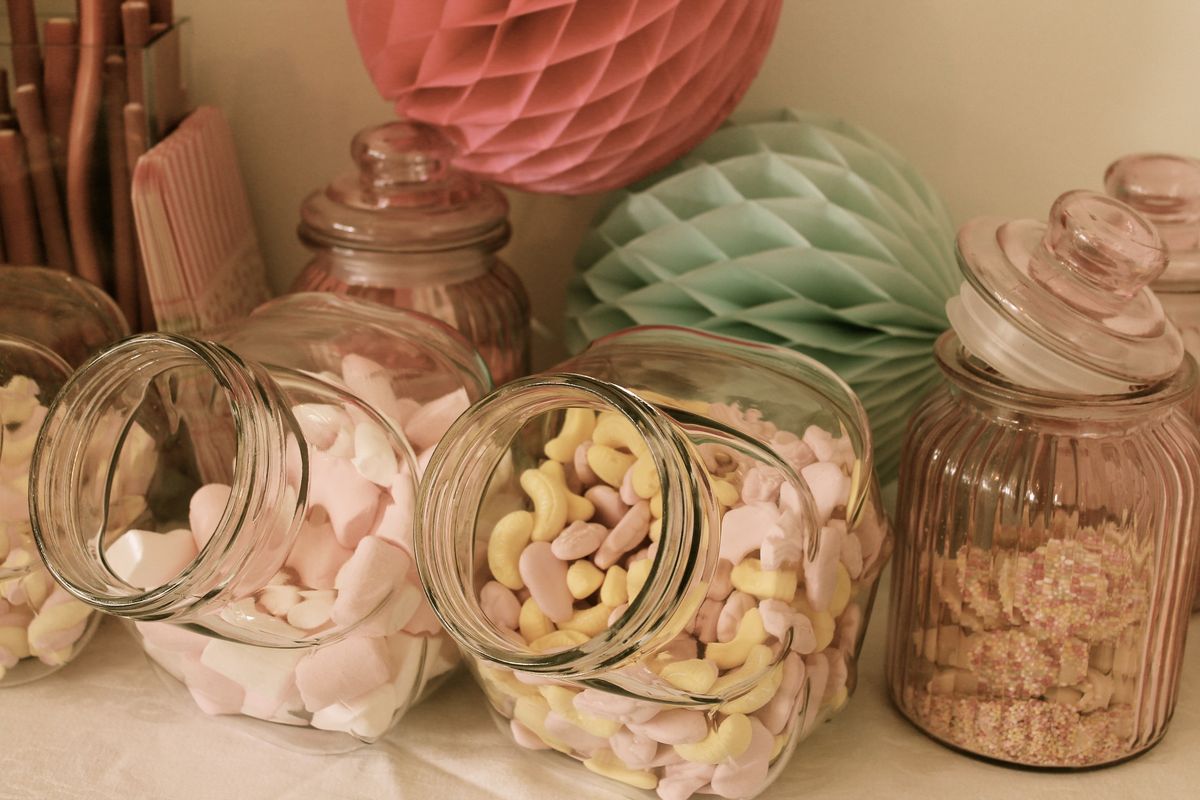 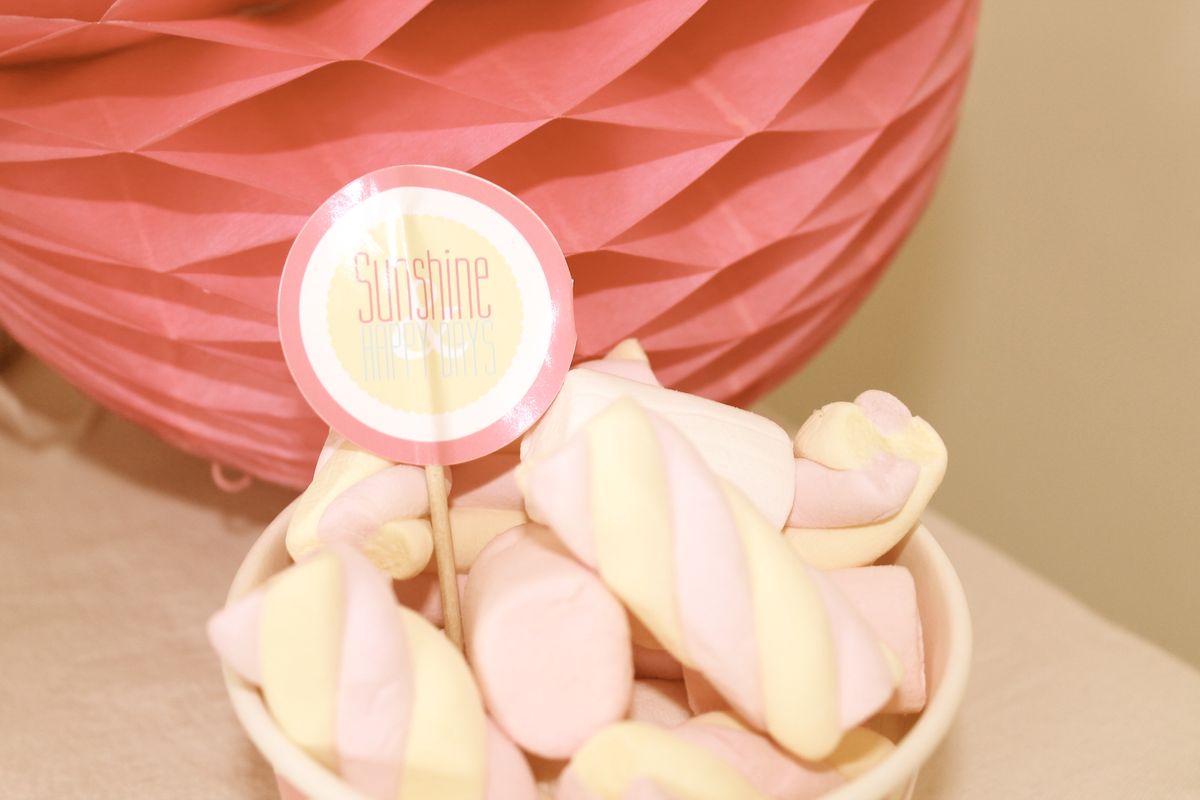 The main thing we really needed though was good weather!

Our house is big enough, but the rooms make it awkward for larger social do’s (my dream is to have an open plan living dining area!!), plus there would be lots of children who I’m sure would rather run round a garden than be cooped up playing in a bedroom or something.

Last week I avidly watched each weather report on the news channels and kept scrolling down on my phone to catch the latest weather updates, which at the beginning of the week were looking rather unpleasant but, the sun gods were obviously looking down on us as it turned out to be the best day of the week!

We were up so early on Sunday morning getting the house ready, as the service started at 10am, and as you parents know….getting your house, kids and yourselves party perfect is never a mean feat!! As fast as you tidy something away, the kids get something else out!

The morning sun was dazzling through the bright blue sky and glistening off the dewy cobwebs in the garden. We pulled out all the furniture we needed and had put up a gazebo the day before just in case of inclement weather, but to provide shade should we need it also. 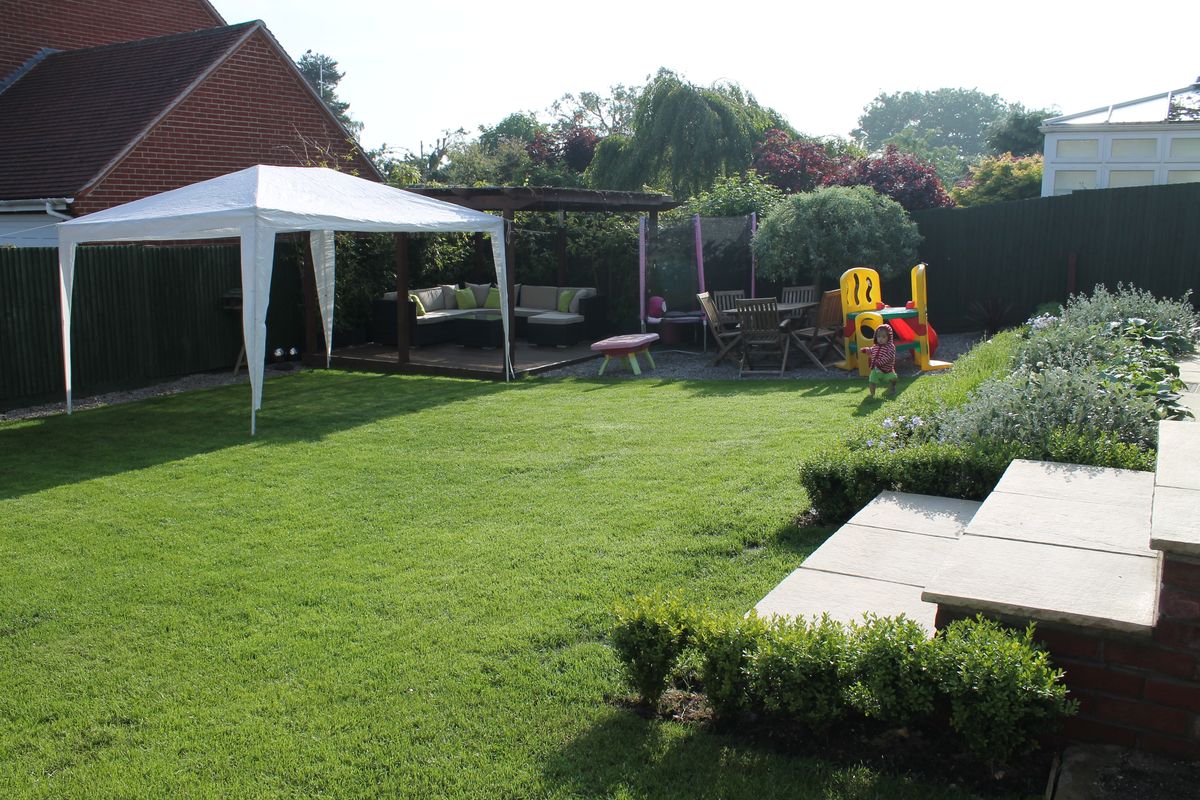 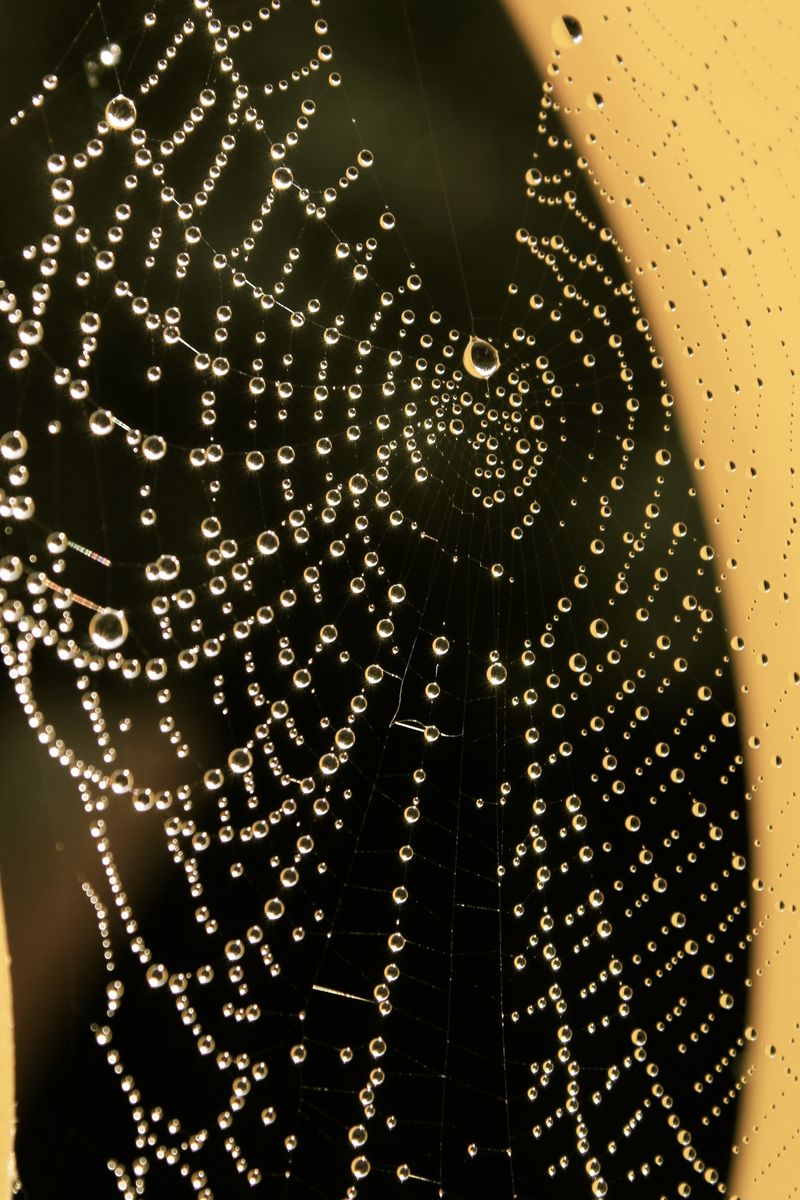 It felt almost like it does on the first morning of your holidays, we all woke up feeling happy and excited.

The baptism service went perfectly. Both H and E were total superstars! And they both looked pretty as a picture in their matching dotty dresses! 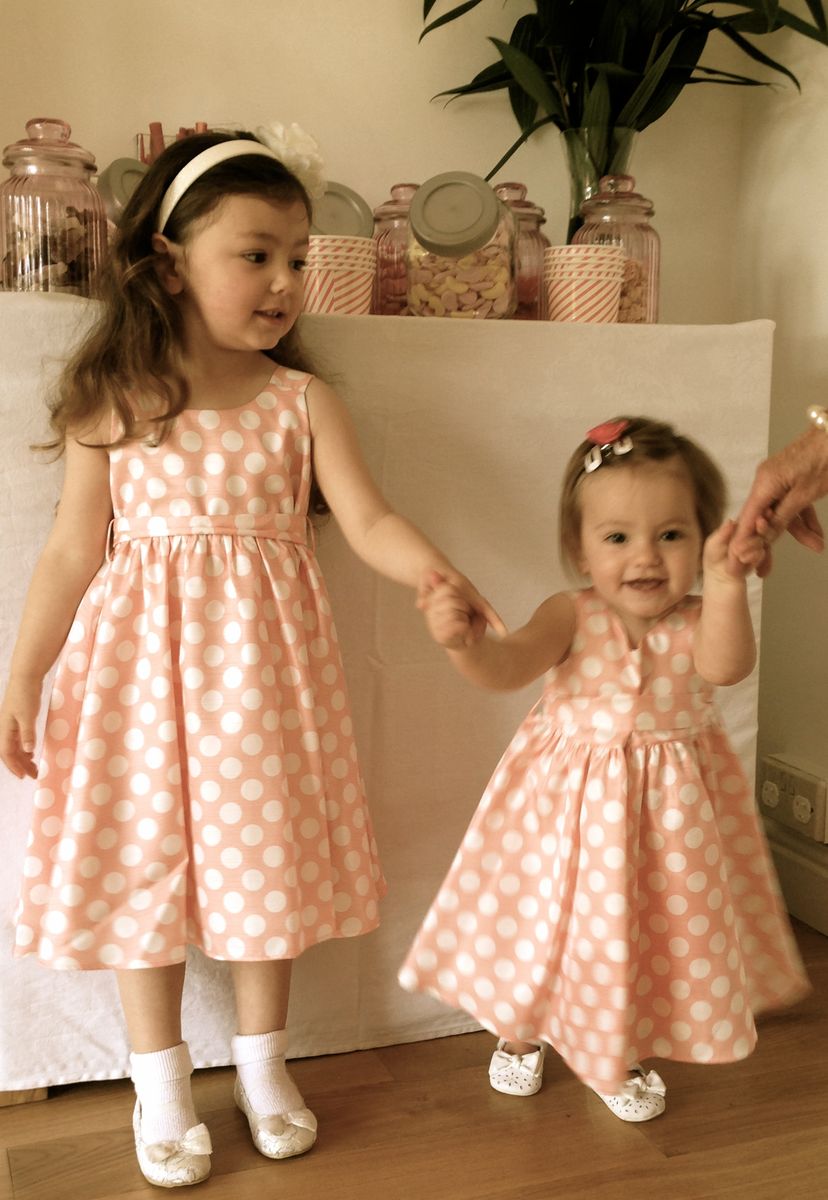 H, being three, was too heavy for the poor Curate to pick up, so he had organised for her to have her very own little step up to the font, which she was allowed to practice on first.

And E, only sniveled very slightly – a complete turnaround from when she met him a few weeks earlier!!! 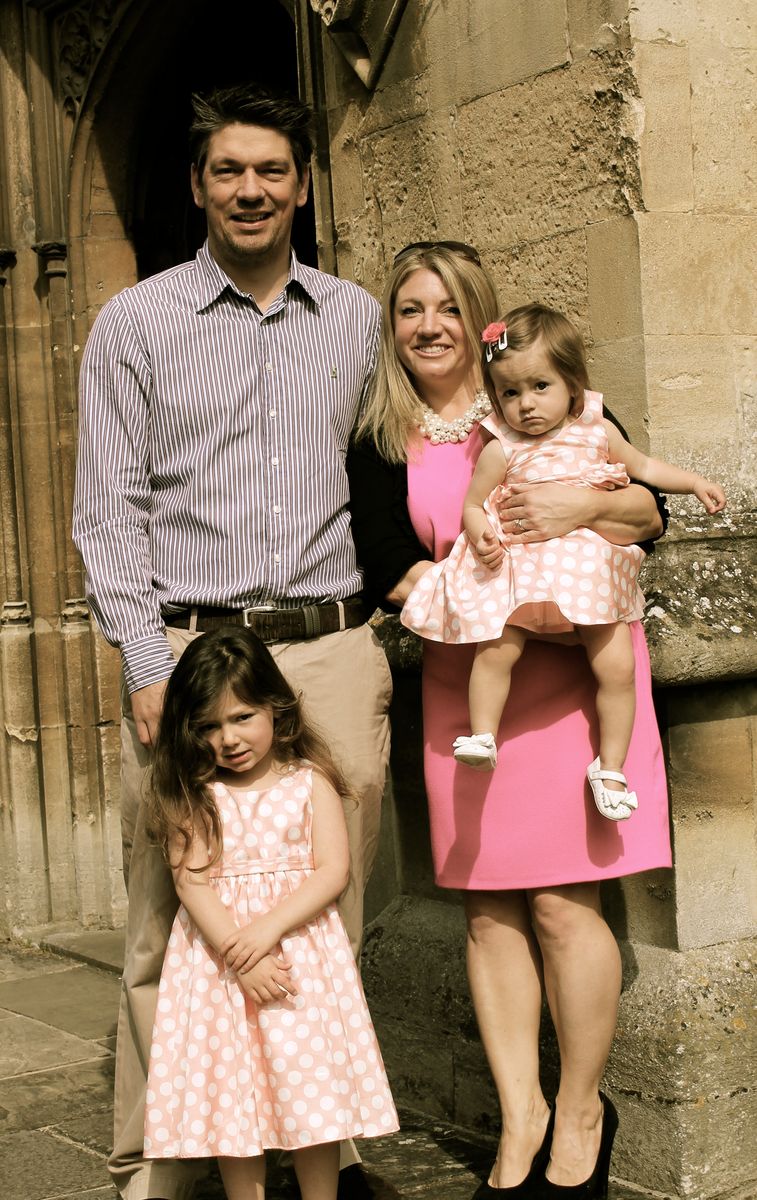 We had to laugh through the baptism though, as one of our (many!!! – I may have gone a little OTT!) godparents leant back and accidentally sat on the piano – sending a rather loud and bellowing collection of keynotes throughout the echoing walls of the church!!!!

The baptism went really well, though because it was combined into the whole Sunday morning service, it did go on a little too long for the little babies and small children. Whilst we were quite literally learning the words to a new song (school assembly all over again), some of the kids were busily building a tower out of the church pew cushions!! 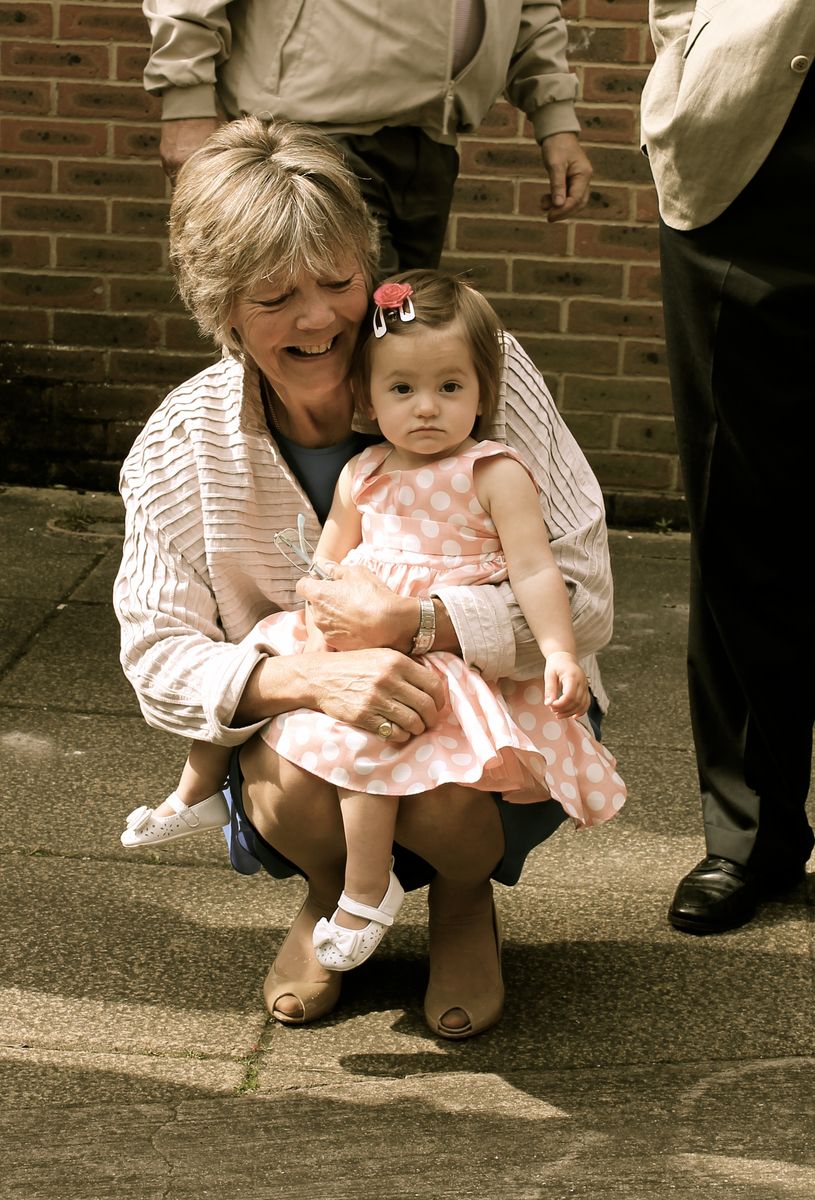 The church staff were warm and welcoming though, and especially tolerant of children, so really didn’t seem to mind! Whereas I just didn’t know where to look!!

So once the ceremony was over, we all headed back to our house for drinks and nibbles.

I say nibbles – I meant half a pig!

Ok – so not really half a pig, but it was rather large! We had decided to do pulled pork rolls, so the pork had been cooking for the last 22 hours straight!!! The house did smell rather amazing at the end.

Mr B had asked me a couple of days earlier if I could pop to the butchers and pick it up as he’d gone in prior to this to let them know. So there I am waiting for them to bring up what I thought would be a large piece of pork, so I am ashamed to say, I let out a little shriek or scream when they plonked it down in front of me complete with the leg on!!!

I am a bit of a baby when it comes to things like that!!

So, they very kindly sawed(!) the leg off for me and wrapped it up ready for me to carry it back to my car; which I had parked at the other end of town as I had just had my hair done. So there I am, tottering in my wedges, sweating through my nice new hair and hugging a piece of pig like a baby as it was so heavy and this was the only way I could carry it!

I did not look good!! Even with the new hair!

I could have killed Mr B!!

Anyway, the pulled pork was totally and utterly AMAZING!! And went down an absolute storm!

I had also done pizza for the kids and laid on a little candy buffet for them which they loved.

For dessert I’d made my old faithful cheesecake – which is always a winner – and although I felt guilty at the time – looking back I am glad that I accidentally had a piece the night before the christening, as I didn’t get a look in the next day!!

Blink and you missed it! And I did!

And then there was the cake.

We had placed an order for the sort of cake I wanted a few weeks back, and I suppose it turned out pretty much as I’d expected – although on arriving to pick it up on Saturday morning, I did have to point out that it should have read ‘Holly & Ella’, and not ‘Holly and Emma’!! 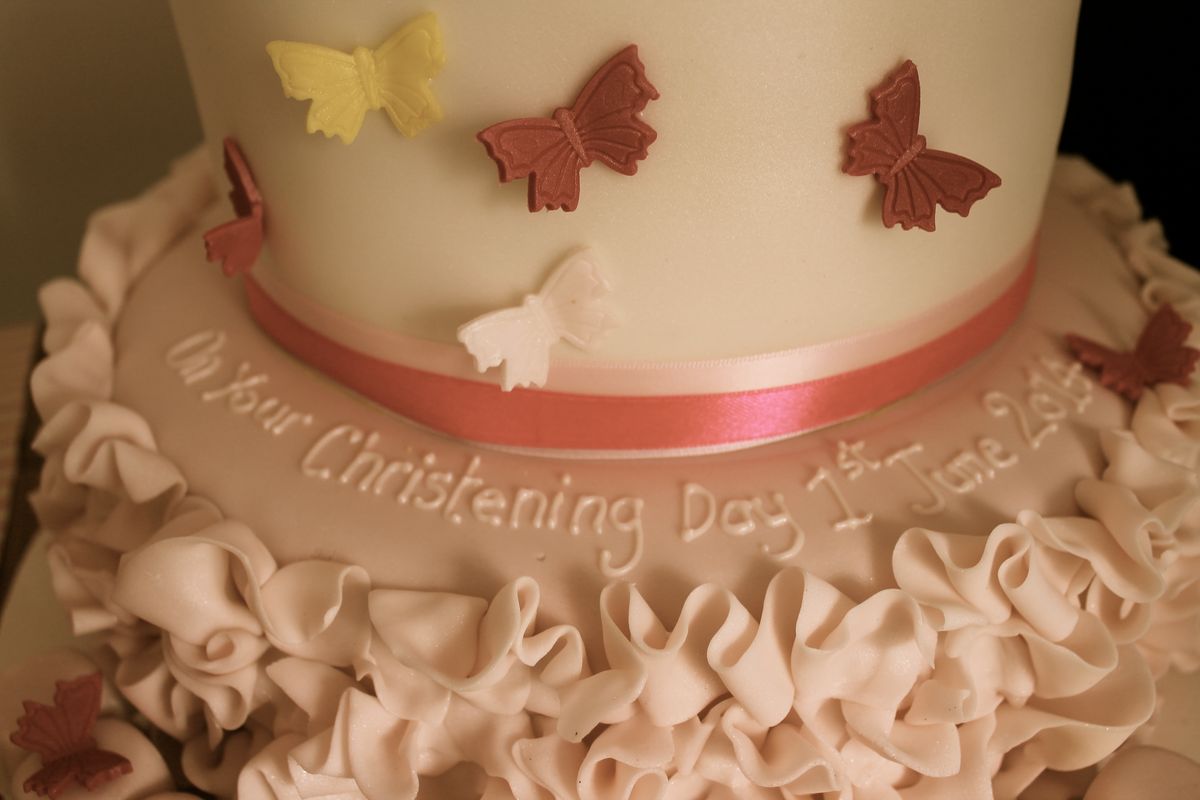 But all was ok – the cake maker was mortified and changed it quickly to read correctly, and we just laughed it off and said at least it was quite close rather than something like ‘Holly and Dave’!

It was huge too! I paid a little extra as I always worry there won’t be enough to go around, though instead, we’ve ended up with an enormous cake which I am slowly working my way through!

My nieces were loving playing hostess, the smaller children were playing amongst the toys scattered around on the lawn, the babies were happily playing under the shade of the gazebo and the adults all mingled and chatted to one another in the warmth of the sun whilst supping on their drinks and returning for seconds of the scrummy pulled pork!

We really were lucky and could not have asked for a better day for our two beautiful little girls!

No more ‘Plan Christening’ on my ‘to do’ list!!