Whilst in France we thought we’d try and make the most of the fact we had no children for the weekend.

Sightseeing is, I suppose is probably not on a four year old and a two year olds list of ‘top things to do’ (well, maybe some, but alas this is not the case with mine!) so being away from our beloved daughters for just that short amount of time, gave us the perfect opportunity to do exactly that!

As I mentioned in the previous wedding post, I was unfortunately a little poorly for the duration of the weekend, so I was lagging rather, especially with the weather being so amazingly hot, but not wanting to miss out I trudged along willingly, only asking for rest stops along the way every now and again. 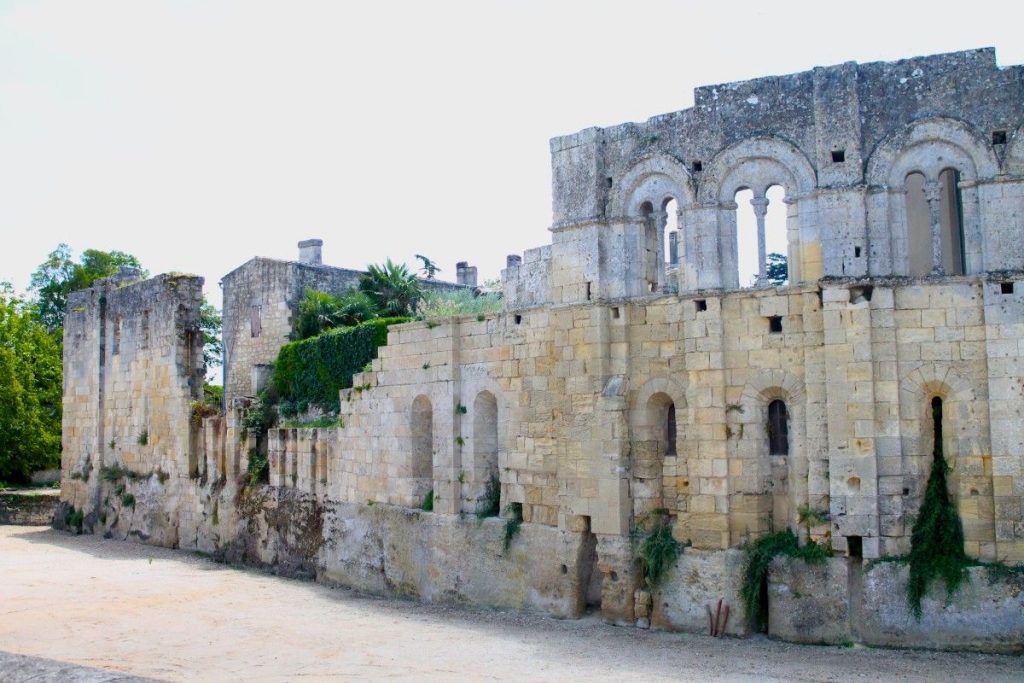 On leaving the beautiful fairytale chateau, our lovely hostess Florence suggested some places to visit seeing as we had the entire day to ourselves before catching the last flight out of Bordeaux and back to Gatwick airport that evening (thank you BA for bumping us back to this one!! Grrr!)

So, after popping in the relevant information into the sat nav, off we trundled, across the most picturesque vine-filled French countryside to Saint-Emilion. 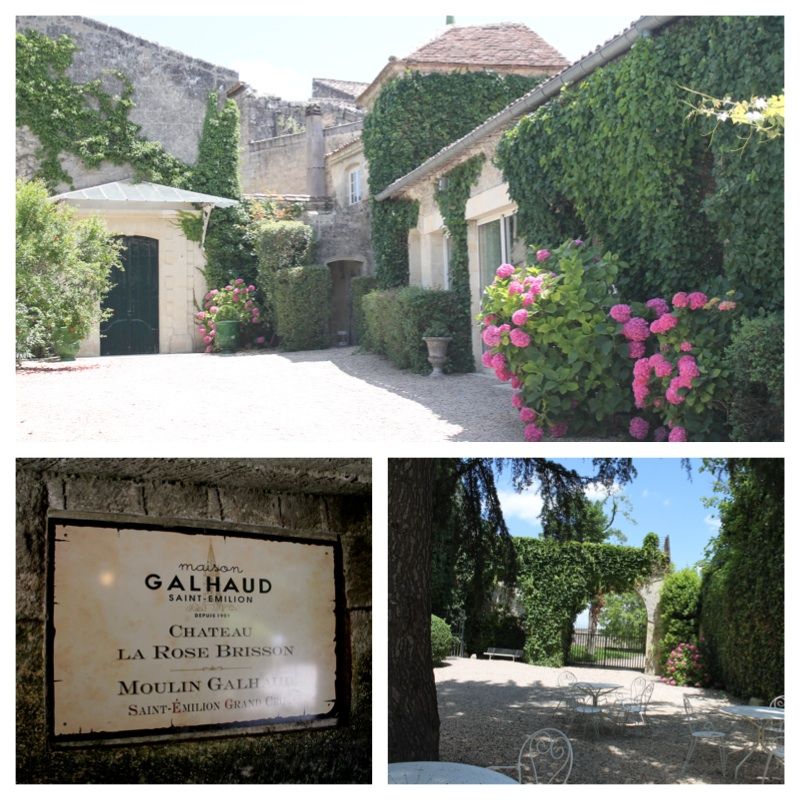 Now I’m a little ashamed to admit that my geographical and historical knowledge is somewhat lacking. I had no idea where this place was or why it was somewhere to visit.

But I’m so pleased we were advised to go. 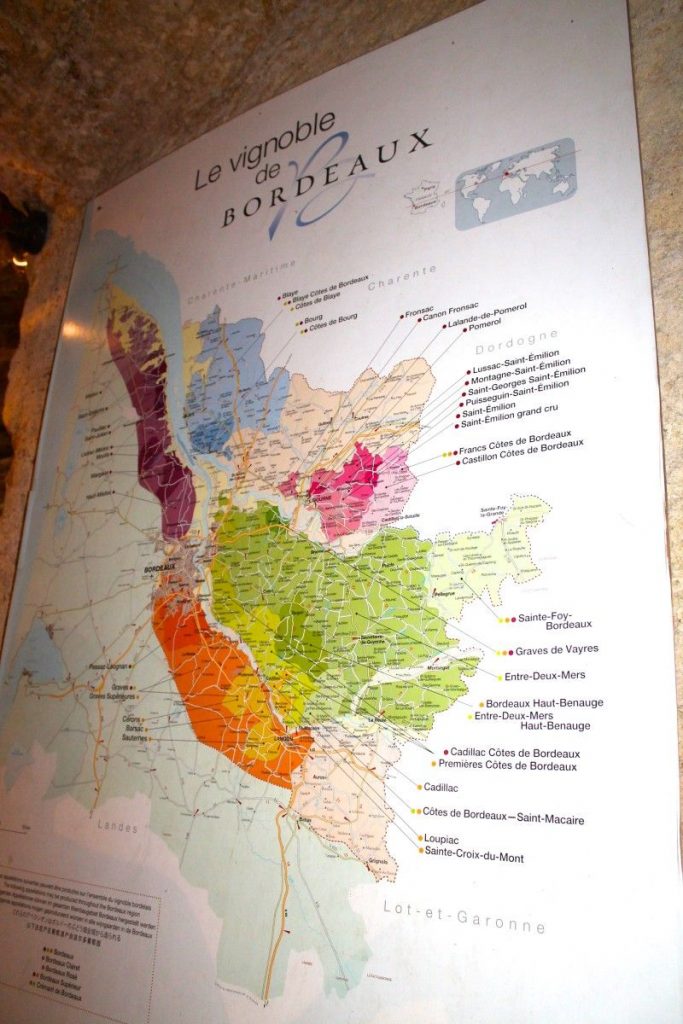 Saint-Emilion is a World Heritage Site which dates back to prehistoric times and is renowned for its vinyards and wine, being one of the primary red wine areas of Bordeaux.

The town itself is stunning.

To be honest I was rather unaware of exactly how picturesque the town was to be until we passed a long narrow street which was amazingly steep, so immediately it was a challenge to try and get down without slipping on the shiny cobbles which have been smoothed down under centuries of footsteps.

Luckily there was an iron railing down the middle and I managed to slowly make my way down safely in my flip flops! For my friend it was a different story though. She slipped over! Though this was probably because she was concentrating more on the enticing Macaron shop rather than looking where she was going! 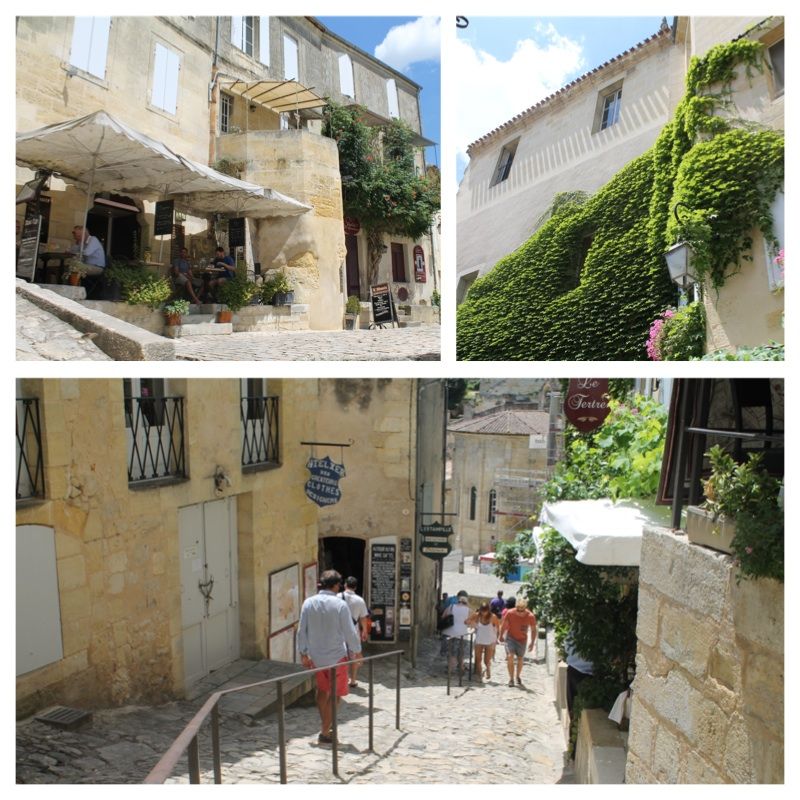 Once at the bottom, we rounded the corner and found ourselves in the most fabulous old plaza, totally hidden amongst old walls and almost shadowed by the colossal church.

A hive of bustling activity as the whole area was covered over and waiters flitted quickly between tables with some of the most splendid looking food.

We’d not long had a snack of crisps and left over pizza (yum!) in the car, so we opted for just a drink and an ice cream instead! With that we just sat back, relaxed and looked out at the captivating ruins of the monolithic church, which had remarkably been carved out of the solid limestone cliff!

A lot of people had braved the 196 steep steps up to the top of the bell tower, but we decided against it with the heat and with me feeling less than 100%! 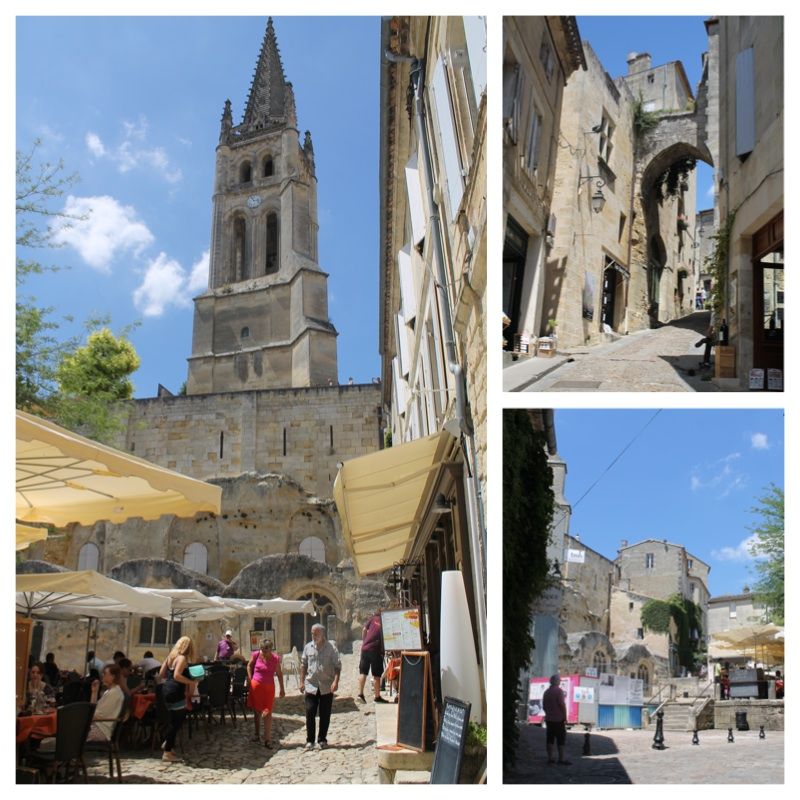 Whilst there, we also visited some old caves, where the barrels of wine are stored. It made for a great place to cool off!

For any wine enthusiasts out there – it’s the most perfect and interesting place to visit!

Then, once we’d finished our ice-creams, it was back in the car and onwards the short journey to Bordeaux. 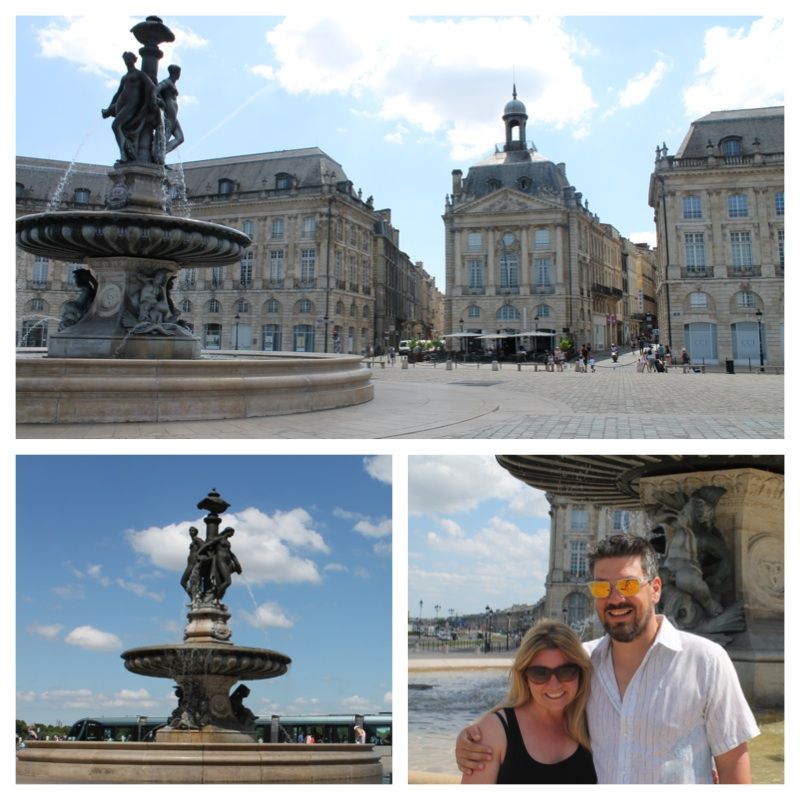 Having lived all my life in medium sized towns, and having only really visited large cities, even London, for the odd day trip, overnight stay or work conference, cities are always pretty breath-taking to me. The sheer scale of the buildings, the amount of people, the diversity of culture and the bustling activity is truly absorbing.

Well, Bordeaux was no different, and certainly didn’t disappoint! 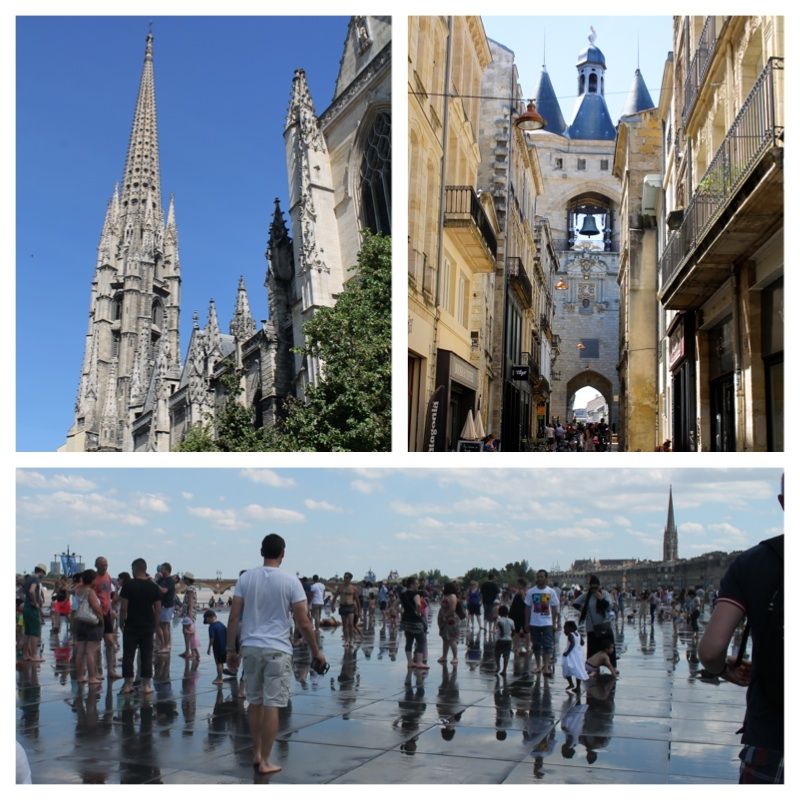 The grand and ornate architecture of the buildings was captivating. The old and new mixed together seamlessly creating a fantastic cosmopolitan atmosphere wherever we walked.

And the people of Bordeaux looked effortlessly cool. I’m afraid to say it, but you could spot the tourists a mile off! Us included!

We walked for ages, up and down the cobbled streets, taking in all that we could and a much of the time looking upwards at the spectacular buildings.

I kept getting left behind the others as I would find something random to photograph around every corner. My husband joked and nicknamed me David Bailey!

It was just too beautiful. 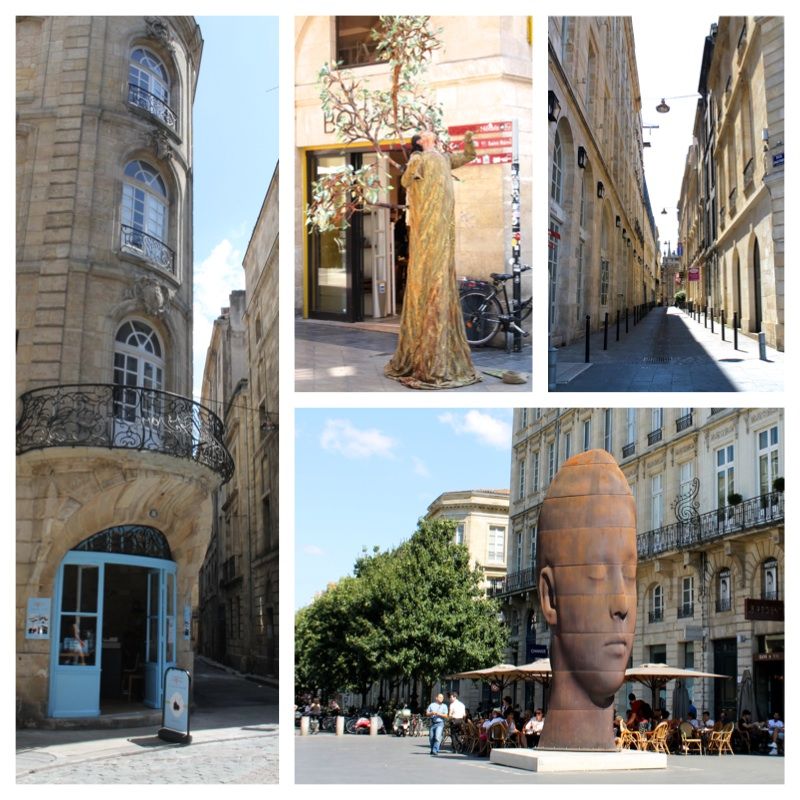 Then it was time for a pit stop and a bite to eat. We chose one of the many ‘al fresco’ seating areas in a main square and just sat and watched the world go by over a refreshing cold beer before heading back to the car.

I wish we’d had more time to explore Bordeaux and I’d have really loved to see it at night, especially with the stunning Place de la Bourse exquisitely lit up against the waters of the Miroir des Quais opposite. There really was such a wealth of history to see and experience.

We were so very lucky to have had a weekend to ourselves as a couple to explore. 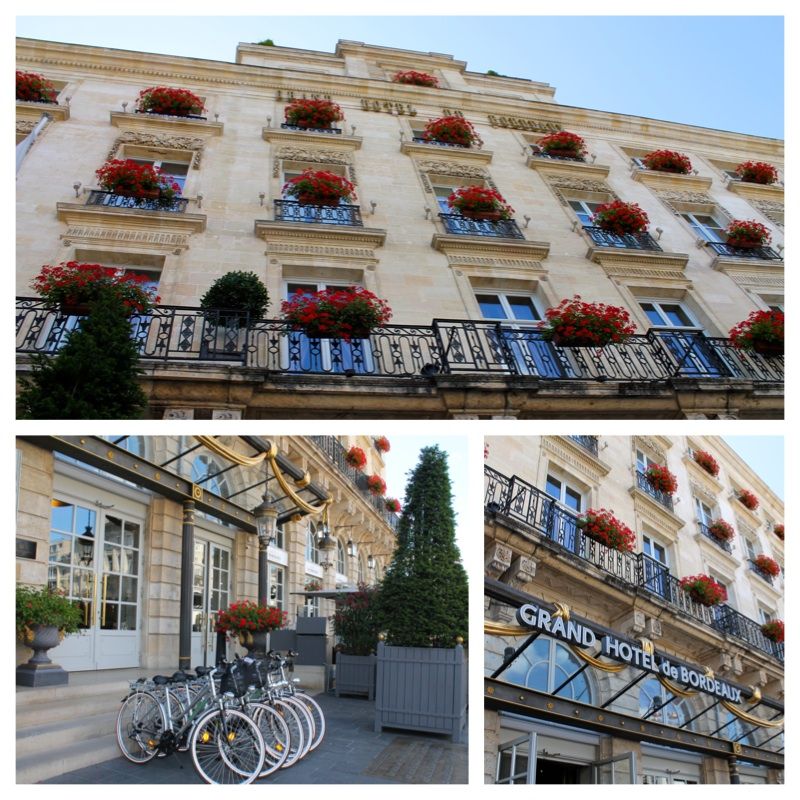 So if you ever get the opportunity to visit either of these stunning places yourselves, I would thoroughly recommend it!