Our Easter weekend this year was a very mixed bag affair.

Firstly – it was very much longed for and needed, so no matter what, we were going to make the best of it, despite some rather horrid looking weather forecasts.

The Friday though was a lovely sunny day. Unfortunately I wasn’t feeling my best, and Ella had a dose of the snivels too. But, after dosing up a little, we managed to drag ourselves out and up to a friends house just up the road, who were putting on an Easter egg hunt for the children and who’d also laid on a rather fabulous Easter spread with homemade hot cross buns, Simnel cake and other yummy goodies.

The children had a fabulous time running about in their huge garden, excitedly looking high and low for the little chocolate treats.And then, lots more running around and games once all the eggs had been found and mostly eaten!

It was lovely just to catch up with our friends too. Lovely people who we’ve come to know and form friendships with through Holly and Ella being at school and nursery.

There was a distinct chill in the air, but it was still warm as the sun beamed down on our backs as and when it made it’s appearance from behind the wispy clouds above.

It was a lovely afternoon, spending time in the fresh Spring air, watching and listening to the kids all having fun playing together out on the lawn. 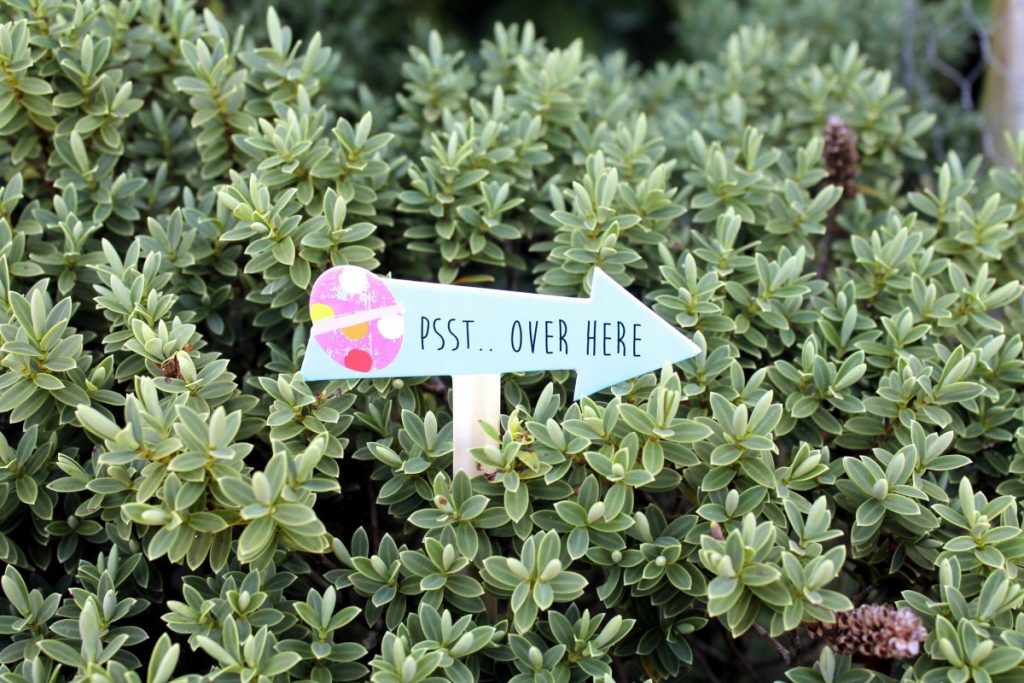 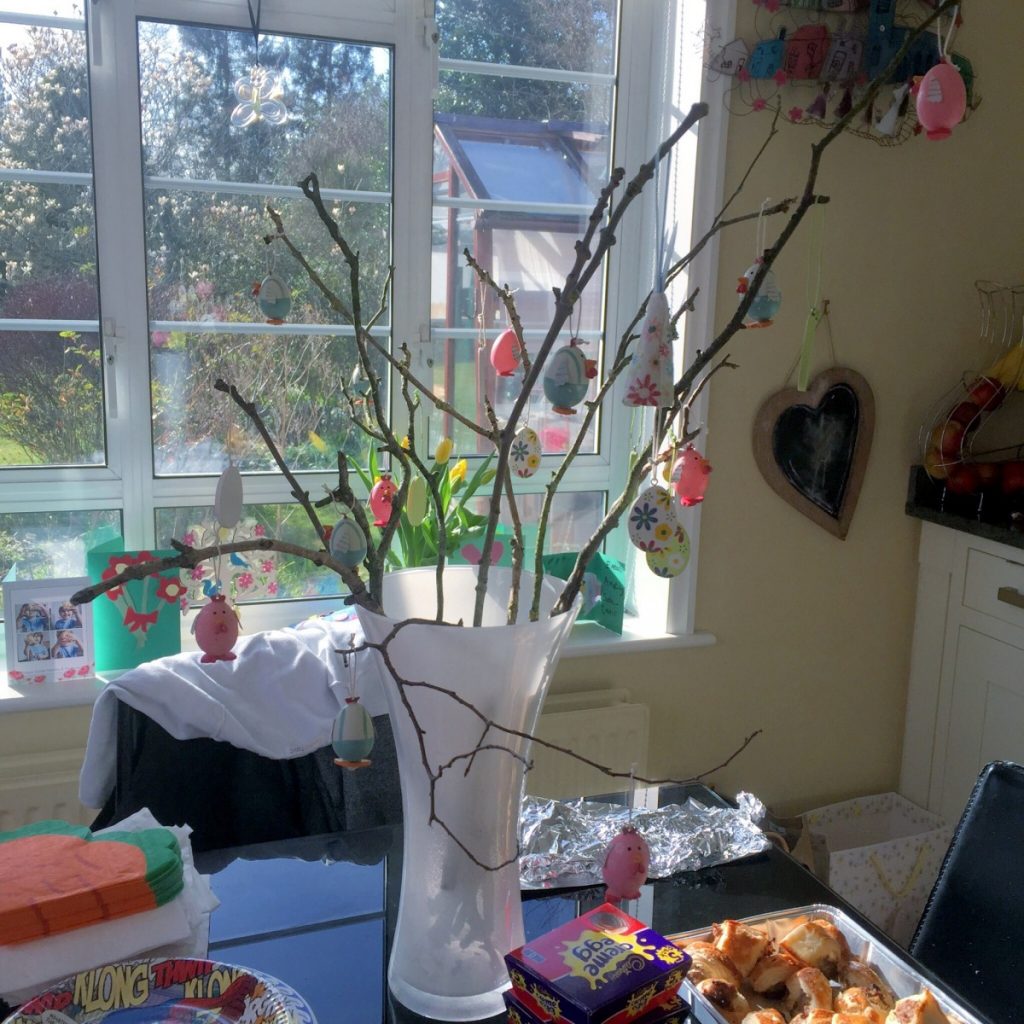 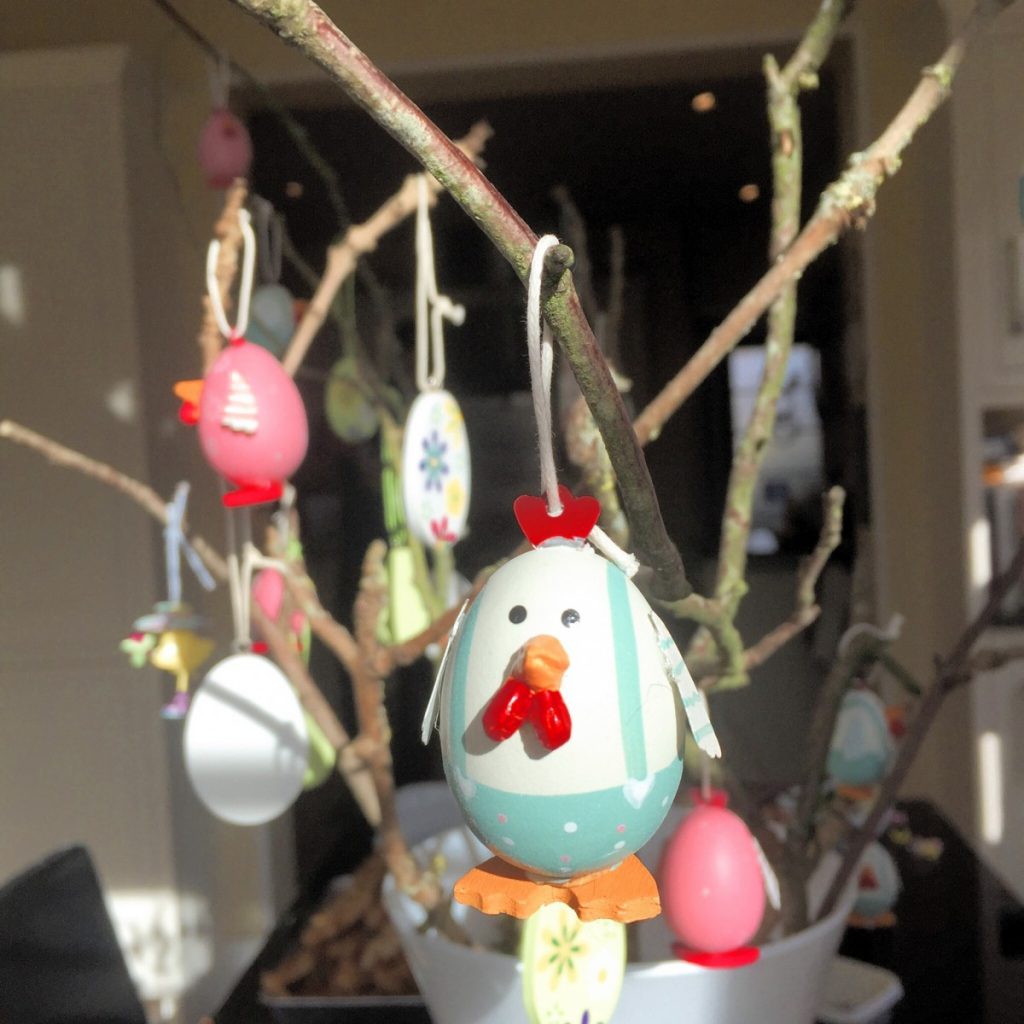 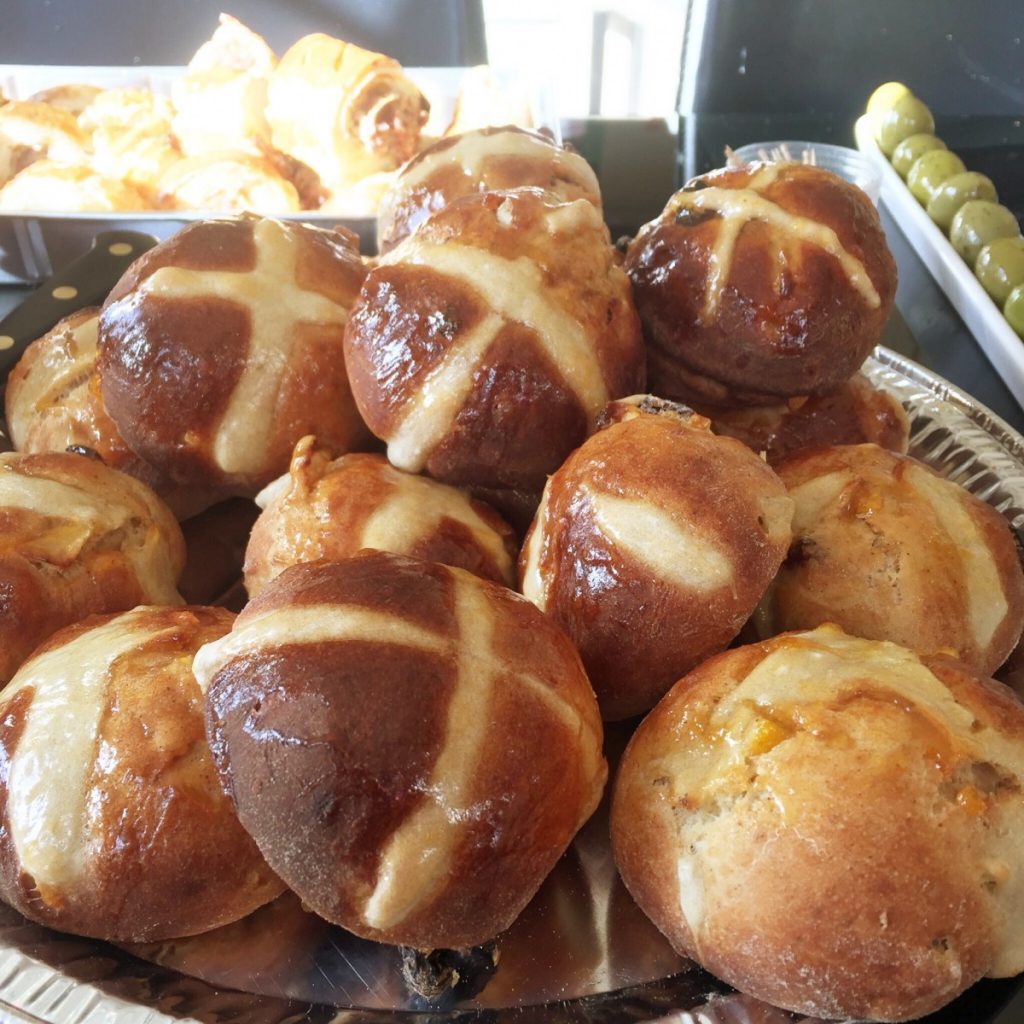 On the Saturday, it was our beautiful little Ella’s third birthday.

I can’t actually believe a whole three years have flown by in what appears to be just the blink of an eye.

Although, when we look back at what has been squeezed in to those few years, it’s been quite eventful.

I still can’t get over the fact, that almost to the day this time last year, our poor little Ella had her horrible accident. And to think that she had only just turned two. She was so tiny. But she’s a complete trooper too.  She has no fear and just takes life in her stride, enjoying absolutely every moment. With attitude to boot!

She had a super time on her birthday. She was ever so excited to open all her presents, especially her fabulous new wooden play kitchen which she and Holly are already in love with.

Then, at lunchtime, it was time to go to her party.

We kind of cheated a little this year, as usually I would hire a hall and put on a pretty big spread, but with one thing and another, there was just not enough hours in the day, and so instead we held the event at a local soft play centre. Which I must say, was absolutely brilliant, and totally perfect for their age.  Everything was already organised and put together for us, so all we had to do was turn up five minutes prior to the start with the birthday girl!

How fab is that!

As she walked into the little side party room, her eyes just lit up as she spotted the huge Tinkerbell and Dinosaur helium balloons and decorations.

Yep. This was the theme she’d chosen! Don’t ask! But it explains why there’s a couple of dinosaurs sat on the amazing Tinkerbell cake which my mum did, (pictured below).

And, it was so heartwarming to see how proud and special she looked as all her family and her little friends sang Happy Birthday to her, and as she waited excitedly to blow out her candles.

So, a huge Happy birthday to my beautiful little girl. 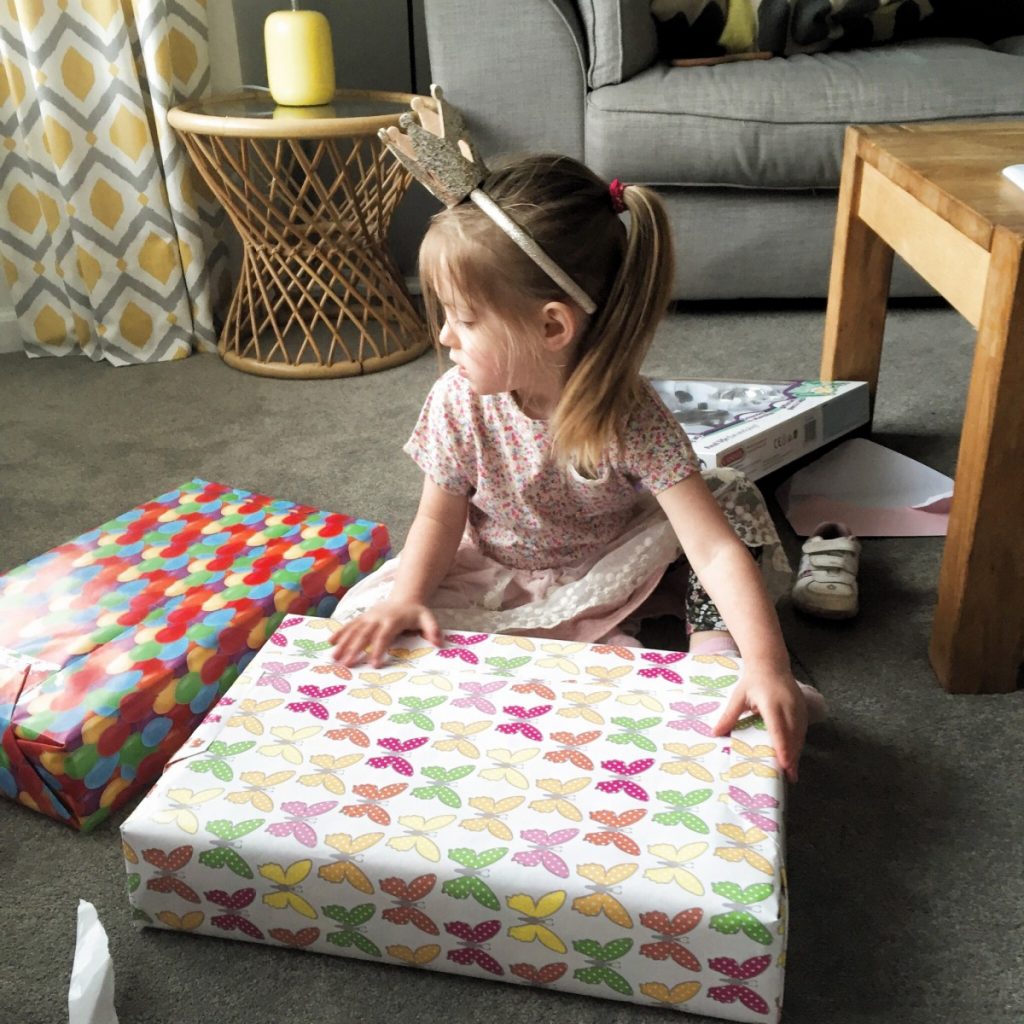 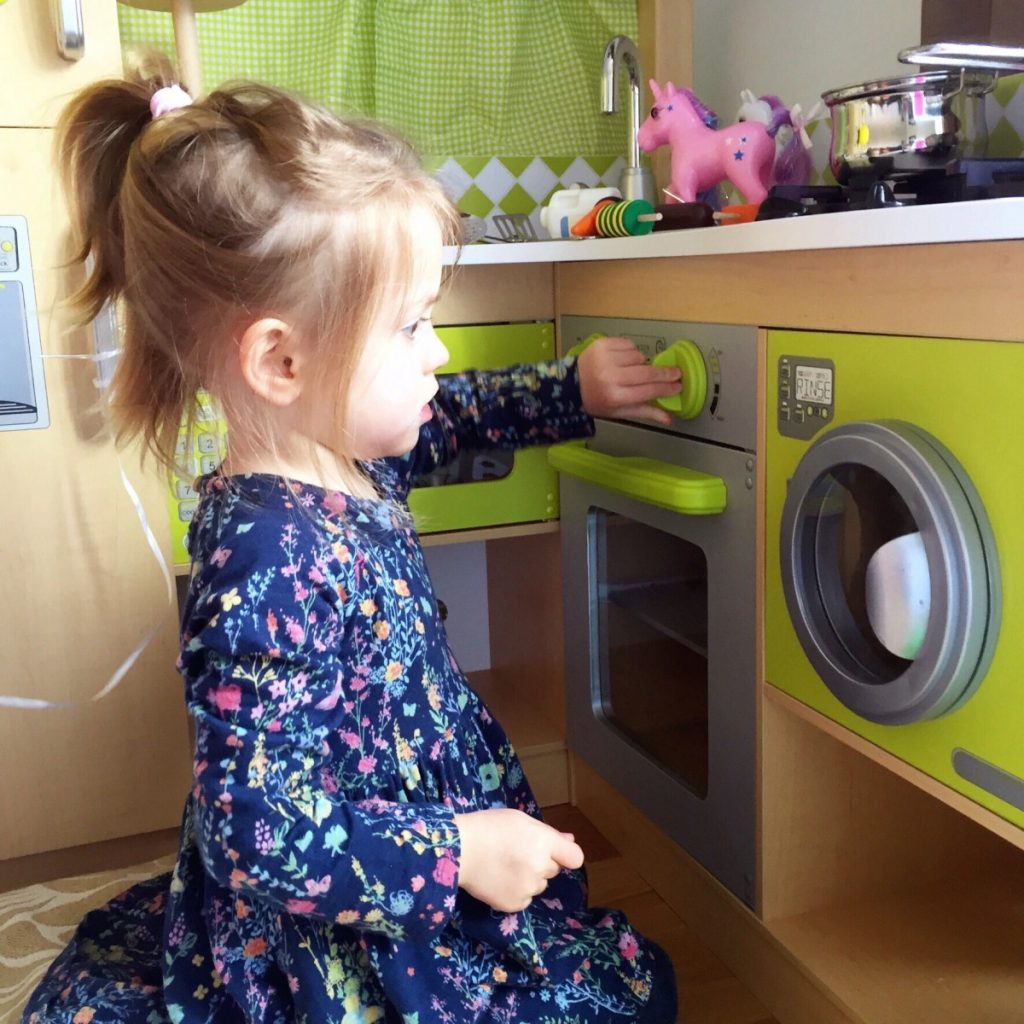 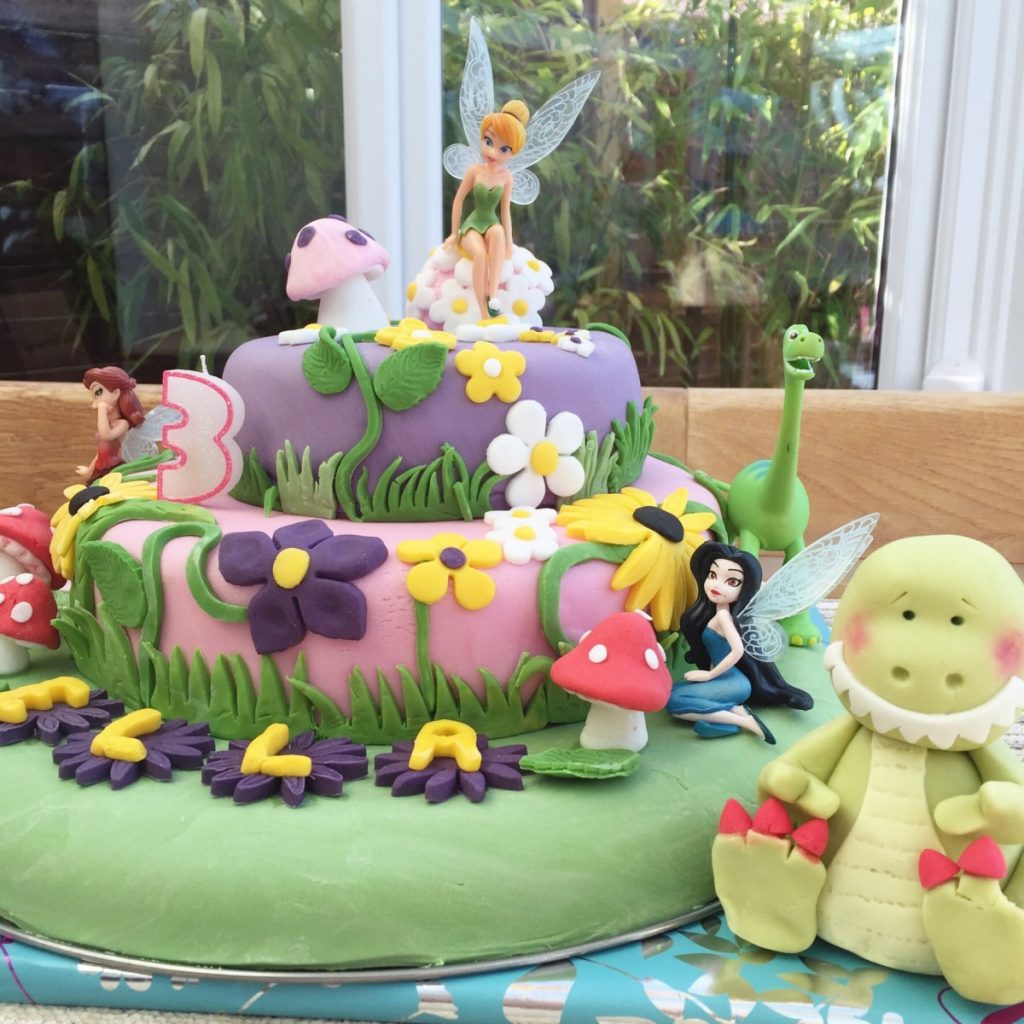 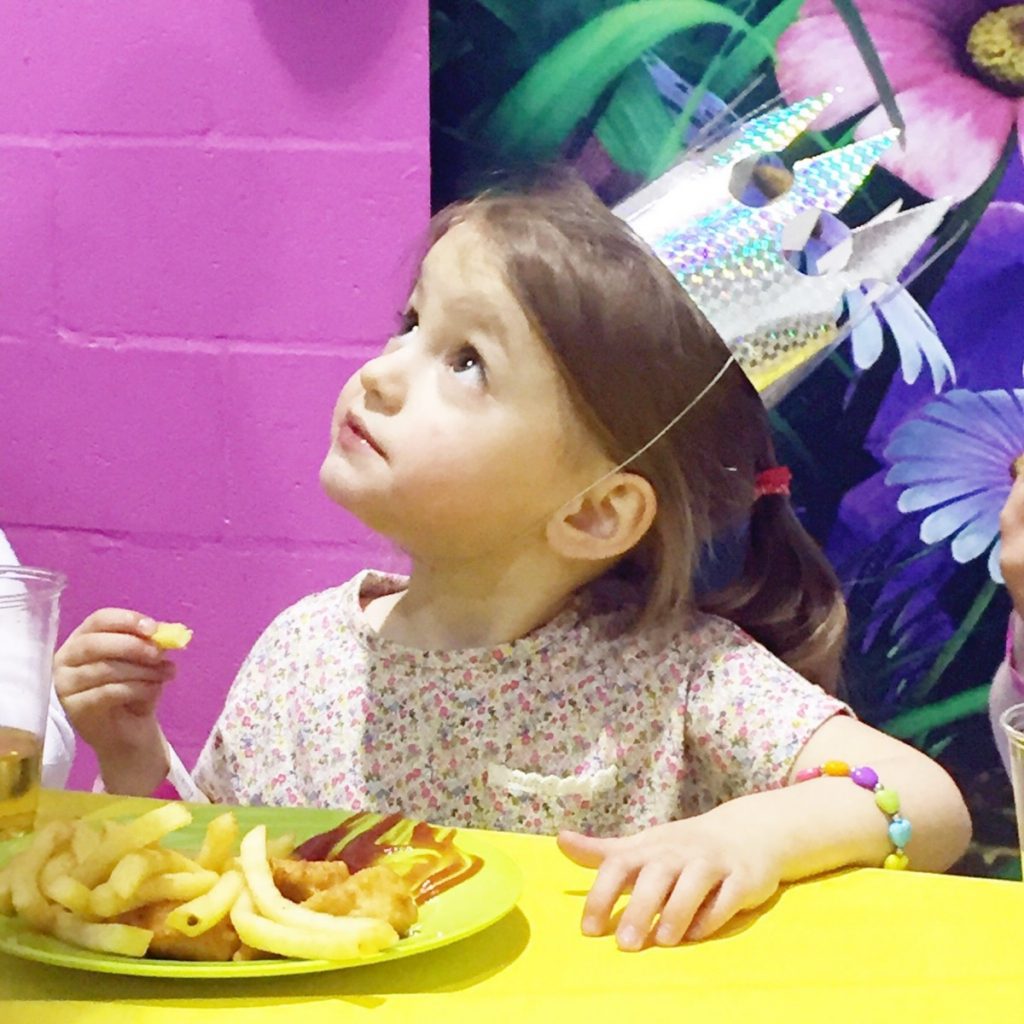 Sunday was rather a write-off.

The weather was atrocious thanks to Storm Katie, so all we did was potter around the house, doing bits and bobs, watching films and relaxing. Again though, all good for me, as I was feeling pretty rotten.

But on the Easter Monday, the storm had passed, and although it was still pretty windy, I was desperate to get us all out of the house.

Having been cooped up the entire day beforehand, I was longing for a good dose of fresh air, in the hope it might make me feel a little brighter.

We banded a few day trip suggestions around, but in the end, decided we’d just nip out for a walk in some local woodland instead.  At least this way, we could take advantage of the weather as it was at the time, bright and sunny, as it could so easily and quickly change and if it did take a turn for the worse, at least we wouldn’t have driven too far away, or spent lots of money on admission etc.

The woods we went to are so pretty. They’re not the biggest of woodlands in the area, at least I don’t think they are, but they are plenty big enough for a good hour or so looped walk.

Unfortunately, Ella was messy before we’d even left the car park though! Spurred on once again, I suspect by Peppa Pig herself, she’d jumped enthusiastically into a very large and unexpectedly deep puddle no sooner than we’d got them out of the car. But, after a bit of reassurance that it would be ok, all was good, she didn’t care and just carried on regardless.

We went a little off the footpath I think, as we seemed to follow a little brook as it wound it’s way through the large overhanging trees, which was ever so lovely and so beautiful, But, as was the case in our recent visit to another local nature reserve, I still had no wellies. Yes, I know – I felt very silly all over again, and this is up there as main priority now on my ‘to do’ list!

But the girls thought this was brilliant. And very funny too – that poor mummy was sloshing through the mud in old trainers, and trying hard to hold onto a fence line so she could walk on some pretty steep verges! Thanks girls!

They both loved the walk. It was as if they were on a big adventure. None of us knew exactly where we were or where it would lead us, which was so exciting for the girls.

We stopped for a while at a bridge which lay across the brook, and we had a little game of pooh sticks, which also went down perfectly with two girls who were whooping and cheering as they dropped their sticks eagerly into the water, and then ran to watch them reappear on the other side.

By the end of our walk, we were all very grubby indeed, with mud splatters up our legs, over our jackets and anywhere else it had splashed up at.

But, muddy or not, it was a wonderful way to spend the last few hours of the Easter bank holiday weekend.

Just the four of us, as a family, in the beautiful early Spring sunshine.

I hope your weekend was just as lovely. 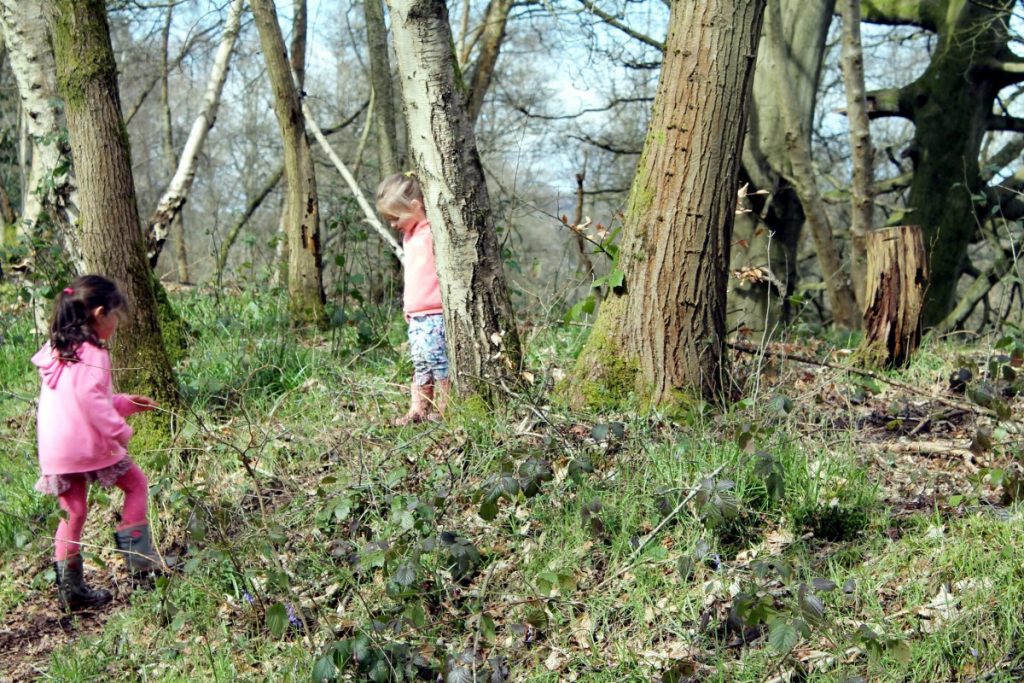 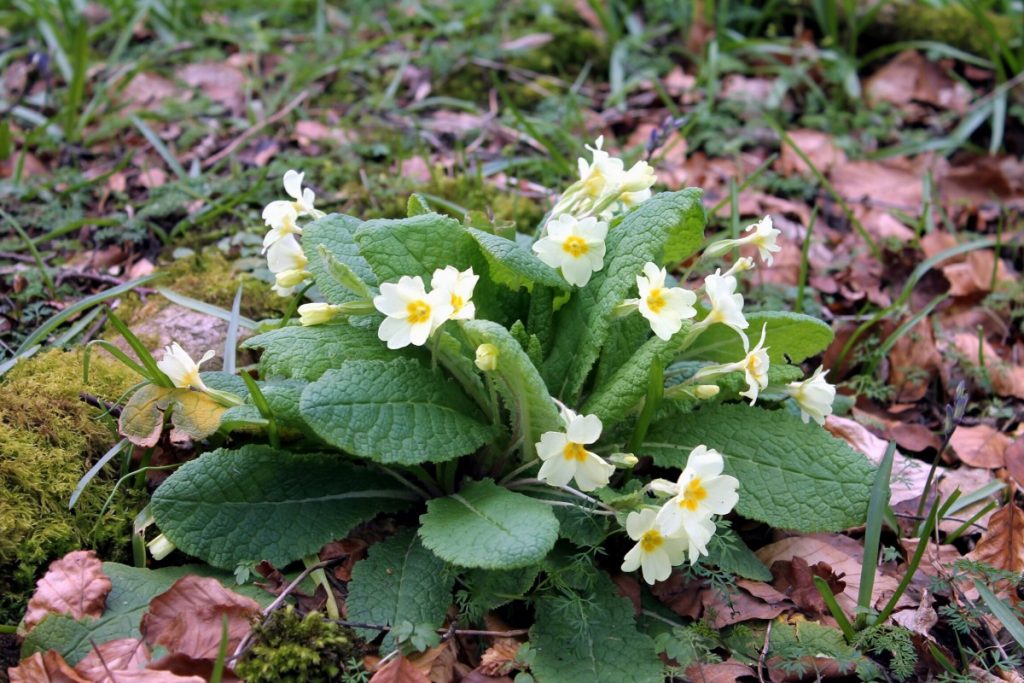 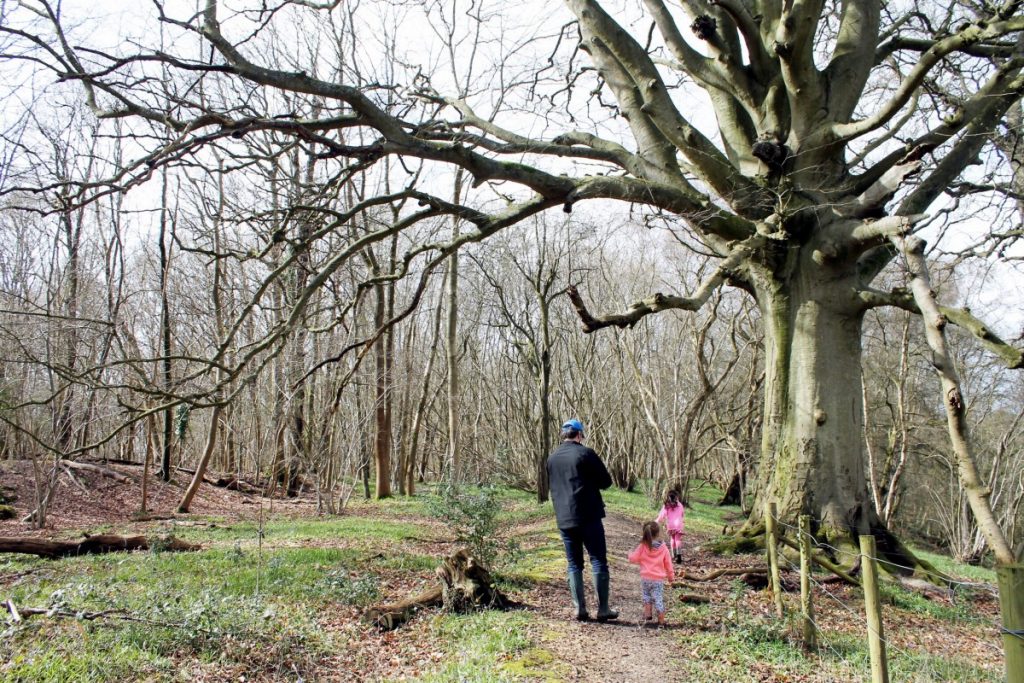 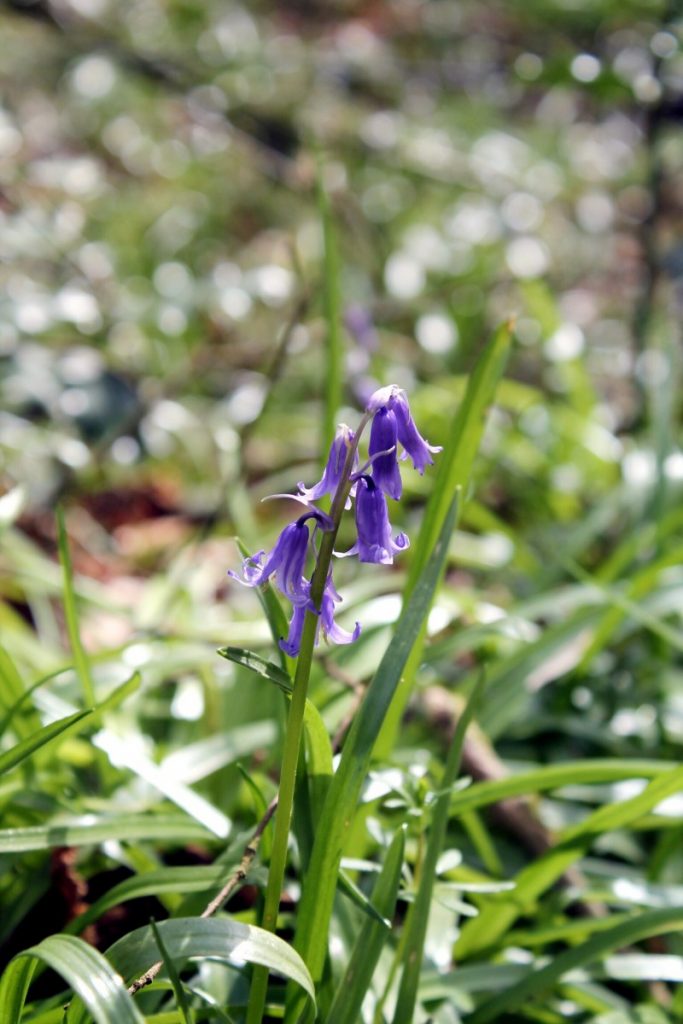 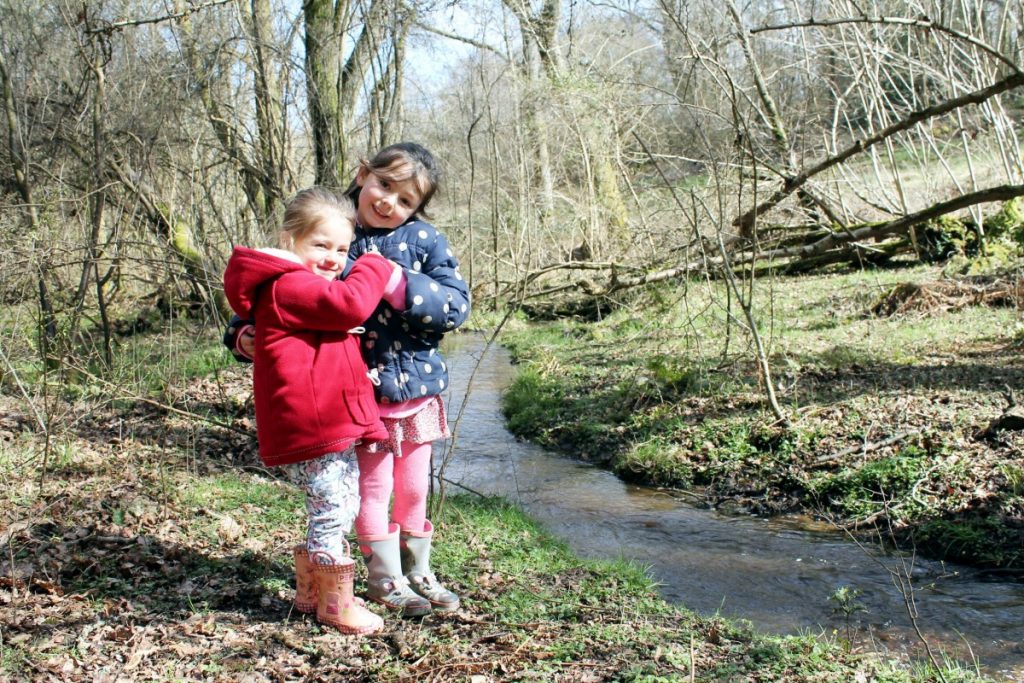 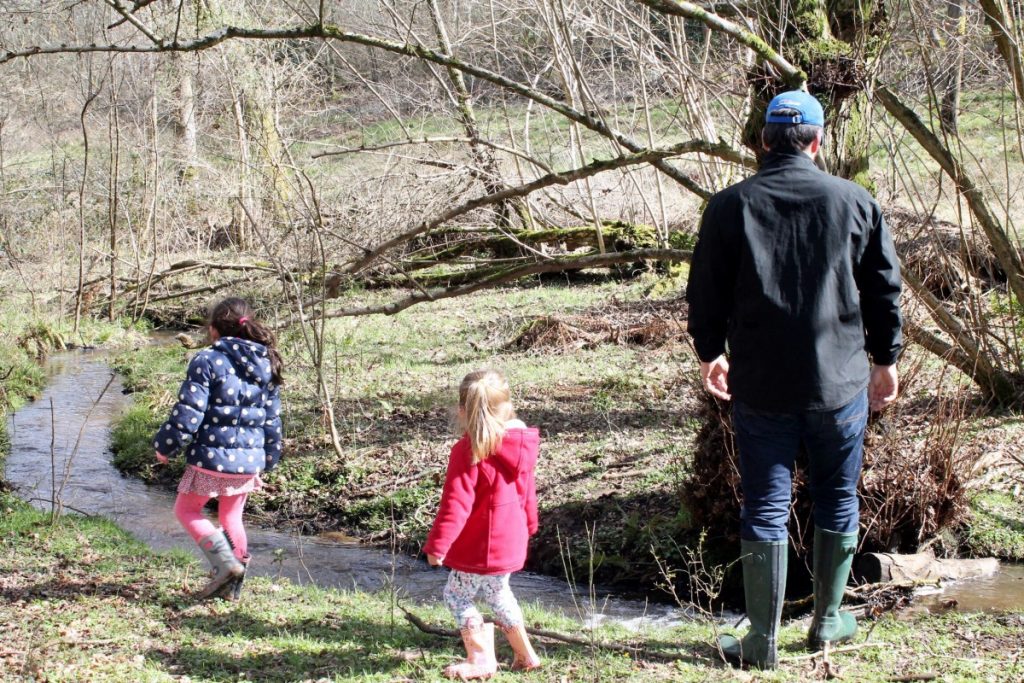 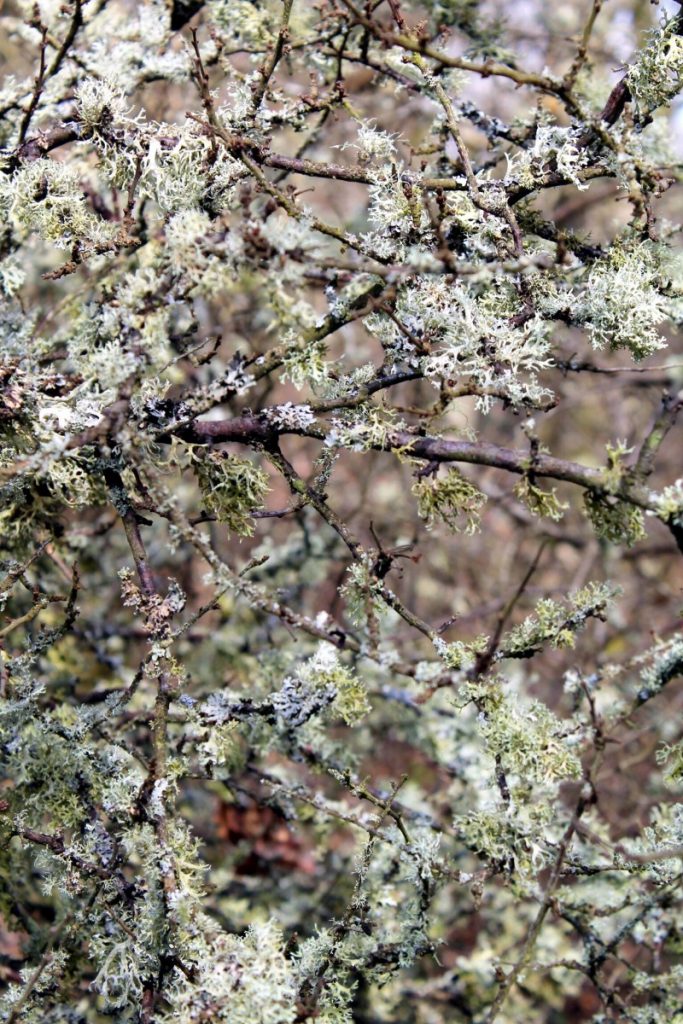 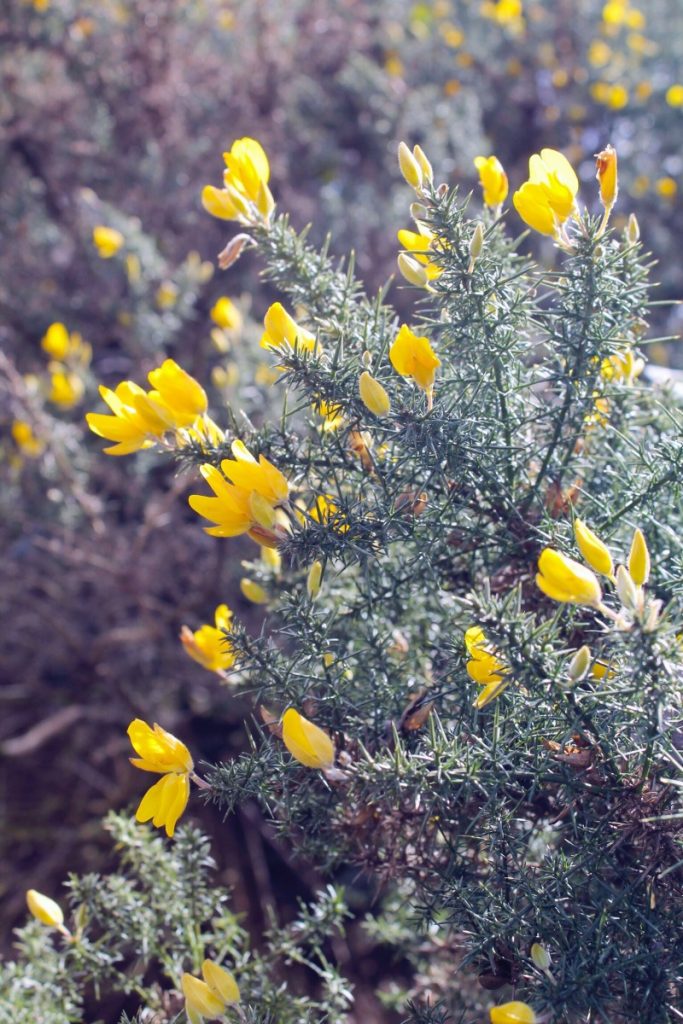