So, exactly where do I start here?

Perhaps at the beginning, just to set the scene.

I think things seem to come in waves for my group of friends – and when the bad kicks in – it really goes full throttle.

And this month it’s our turn.

Three weeks ago, we received some devastating news about my beloved mother in law which has rocked the family for all the wrong reasons.

The news was completely unexpected and out of the blue – and we’re all finding it hard to comes to terms with the fact that she’s unfortunately been given a prognosis of only days/weeks after finding out she has termnal cancer, having been admitted to hospital initially with suspected pneumonia.

It upset us all so much, that I had to take a couple of days off for hospital visits and to try our hardest to come to terms with the sudden and awful news.

Then, last Thursday, I’d literally been back in the office for only a couple of hours, when I received a phone call.

I recognised the number immediately – it was the nursery our girls attend.

‘Sods law’, I remember thinking. ‘I bet someone’s thrown up and I have to go fetch them – this will go down really well with work having only just returned’!!

But I was wrong. Very wrong.

So, I burst out crying on my manager’s shoulder for the second time that morning, made my apologies and left in a hurried whirlwind for the nursery across the town.

By the time I’d arrived, the ambulance was already there, and the nursery staff tried their best to calm me down and explain what had happened so that the paramedics were left to do what they do best.

It was heartbreaking. My poor little Ella was crying out for me and screaming in pain – and I couldn’t go to her for a cuddle, to soothe her and to wipe way her tears.

They suspected that she’d broken her leg.

So, once they’d strapped her up and administered enough pain relief to make her comfortable, we set about our journey to the hospital to the next town along, with the lights flashing and sirens whirring.

Well, as the saying goes, things come in threes, so as it happens, my husband was at home already as he’s only just had a knee operation himself, so is on crutches and pretty much temporarily housebound.

With this, my mum rushed over to pick him up to meet us at A&E.

It was horrible just watching on, and trying our hardest to console our beloved little two year old as she sobbed from scared eyes at all the mayhem going on around her. 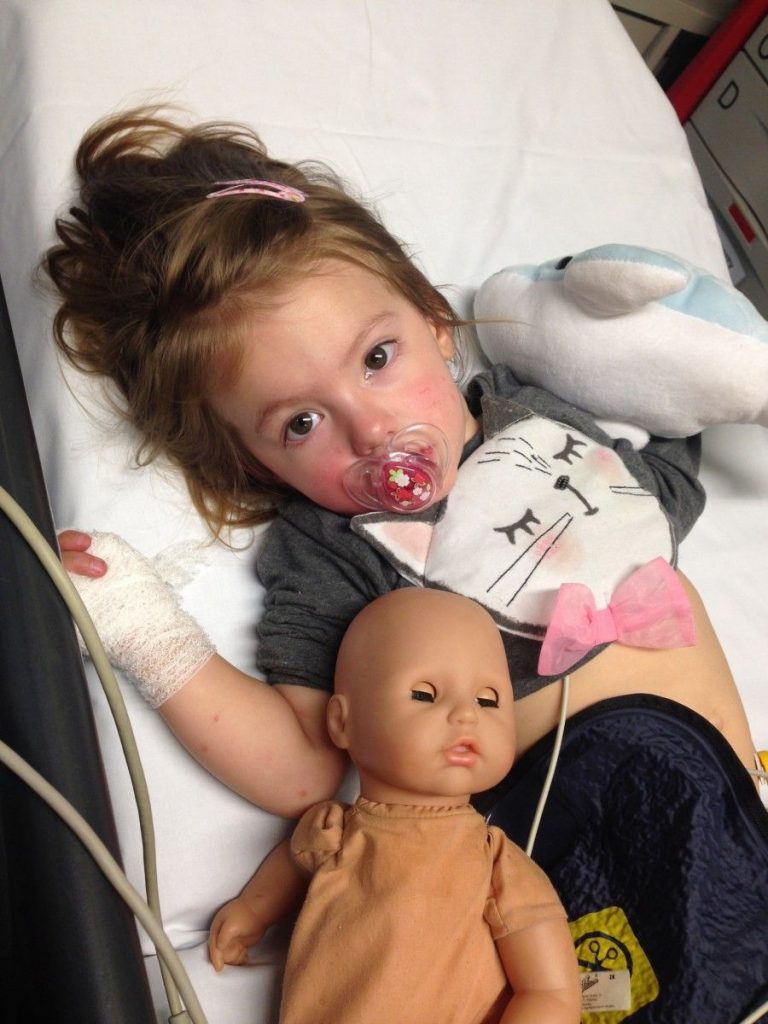 All we could do was stand over her as best we could and hold her hand so as not to hurt her any more but to show her we wer close by.

She looked so tiny and helpless in the hospital bed, with leggings hanging off where they’d had to cut her leg free earlier on.

For some reason, I was completely naive about the whole situation. I just thought that if she had broken her leg, they’d no doubt just plaster it up, perhaps spend a night in hospital on some painkillers ready to be shipped back home the next day.

But oh how wrong could I have been.

The initial X-ray showed that she’d broken her femur – supposely the hardest bone to break in your body – and in a rather rare place to boot, because of how high up the fracture was. It was just below the pelvic bone. 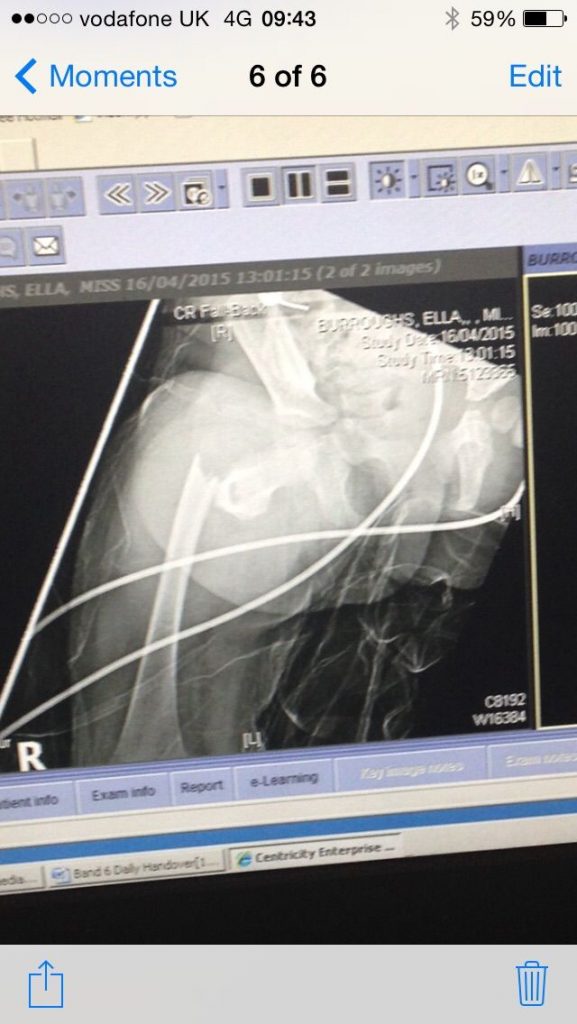 And with this kind of break – unfortunately the only way to mend it was in traction.

But when they told us she’d now be bed-bound for three to four weeks, in traction, suspended by her feet from an over-the-bed frame, I don’t think I quite believed them. 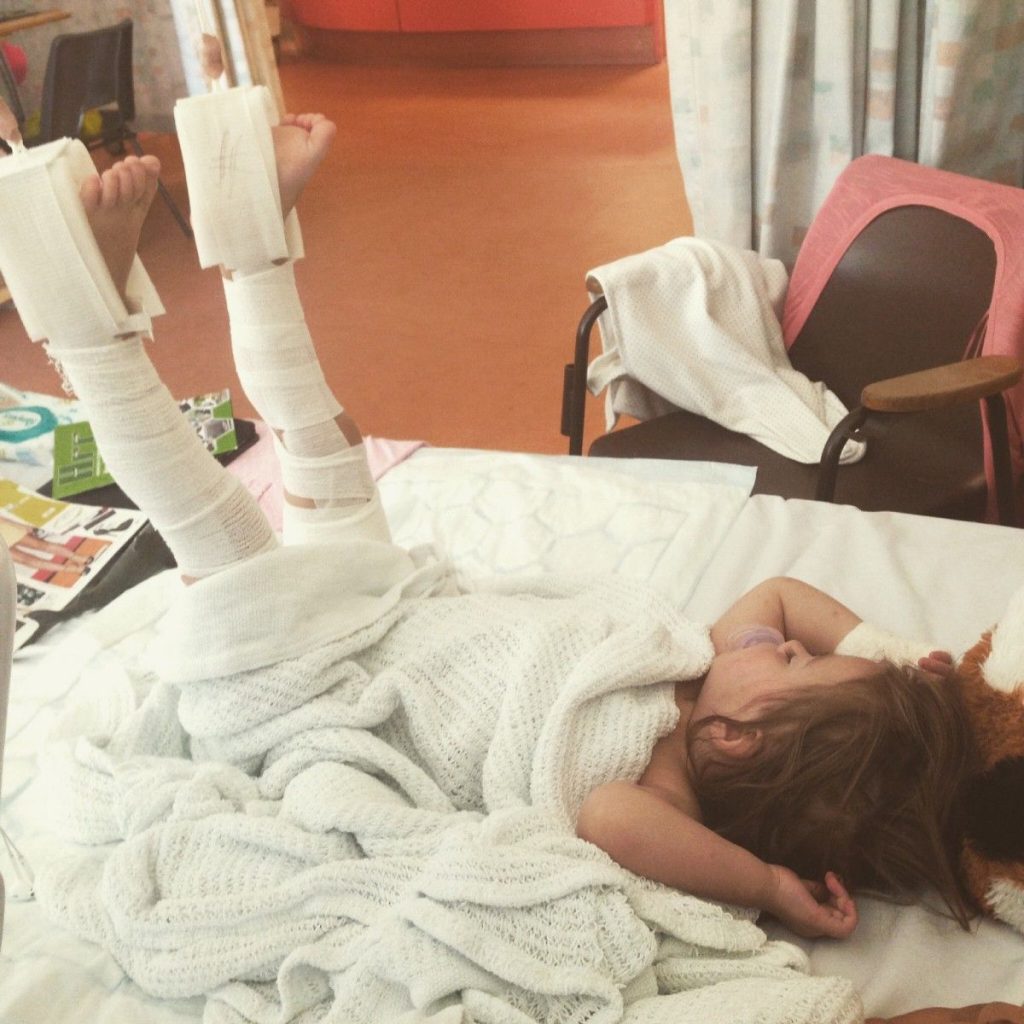 But that was that.

My husband and I have both been taking 24 hourly shifts at her bedside for the past week and a half.

This whole month so far has been heartbreaking, shocking, extremely difficult, emotionally and physically draining and a complete and utter logistical nightmare, where we’ve had to be reliant on others for lifts to and from the hospital.

Poor Ella was scared at first, which is progressing slowly into frustration as the days go by, and our little Holly is having to spend days and nights away from us at others houses, so that Mikey and I can swap shifts at the hospital, and so that he can spend time with our other family member who is now in a hospice.

We all feel rather numb at the moment to be honest. Life is a bit of a blur and doesn’t feel real.  It seems odd that I’m sat typing this on a pull-out camp bed, in a curtain enclosed cubicle.

But, even though there’s so much sadness in our household at the moment, we are also trying to think of the positives in some of the situations.  For Ella it could have been a whole lot worse, but it wasn’t. So we are trying our hardest to be thankful for small mercies in amongst the heartache and gloom.

She had another X-ray this morning, and we are hoping for at least some good news on one part – as with a bit of luck it will be a positive result for Ella and will show her bone mending well. And from this the doctors an consultants have said they’ll be able to give us a pretty good idea as to how much longer she’ll need to stay in hospital.

So, there you have it – a quick update as to why perhaps I’ve been a little on the quiet side lately.

More updates to follow and fingers crossed for some better news.