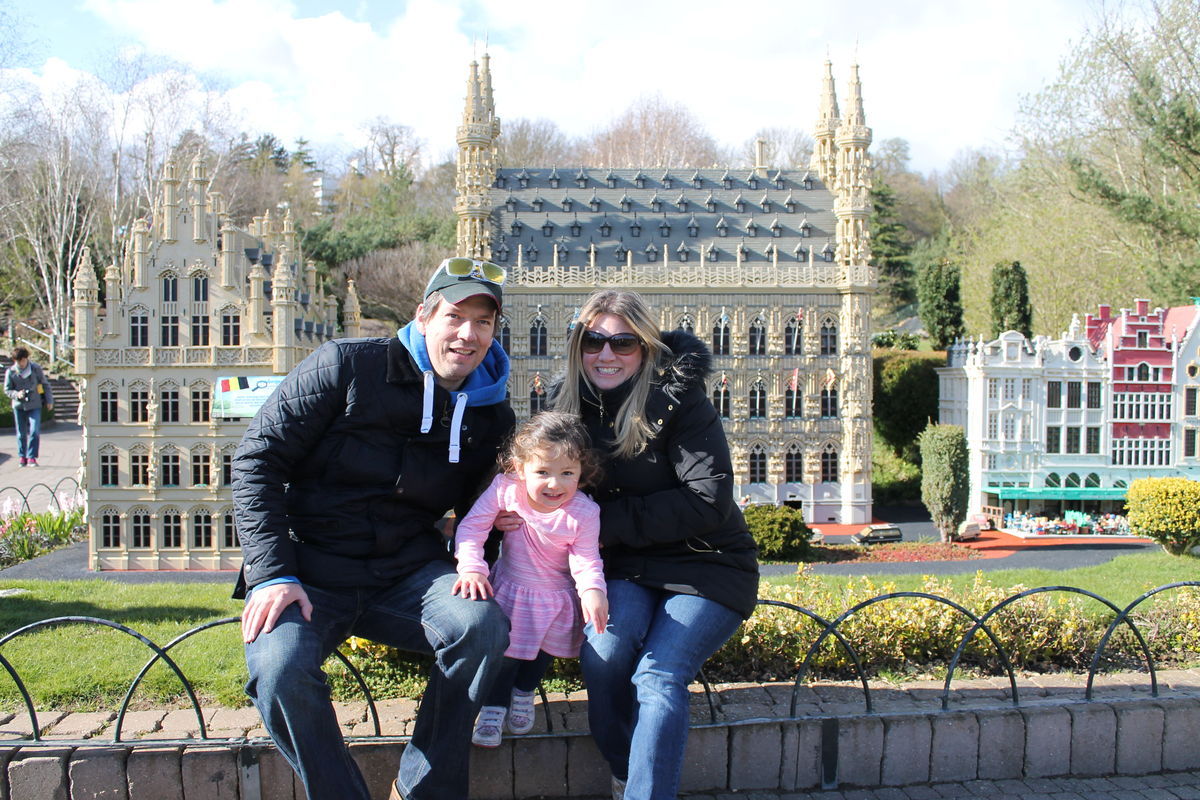 A couple of weeks ago, we were asked by some close friends if we’d like to take a trip to Legoland, to celebrate their daughters 4th birthday. (Her and H are the very best of friends!).

So, early on a Sunday morning, three families merrily convoyed along the motorway to Windsor, with only one emergency toilet stop along the way; which we thought was rather good.

We’d heard countless rave reviews about Legoland from friends and colleagues, so I don’t know who was actually more excited, the children or the adults!! 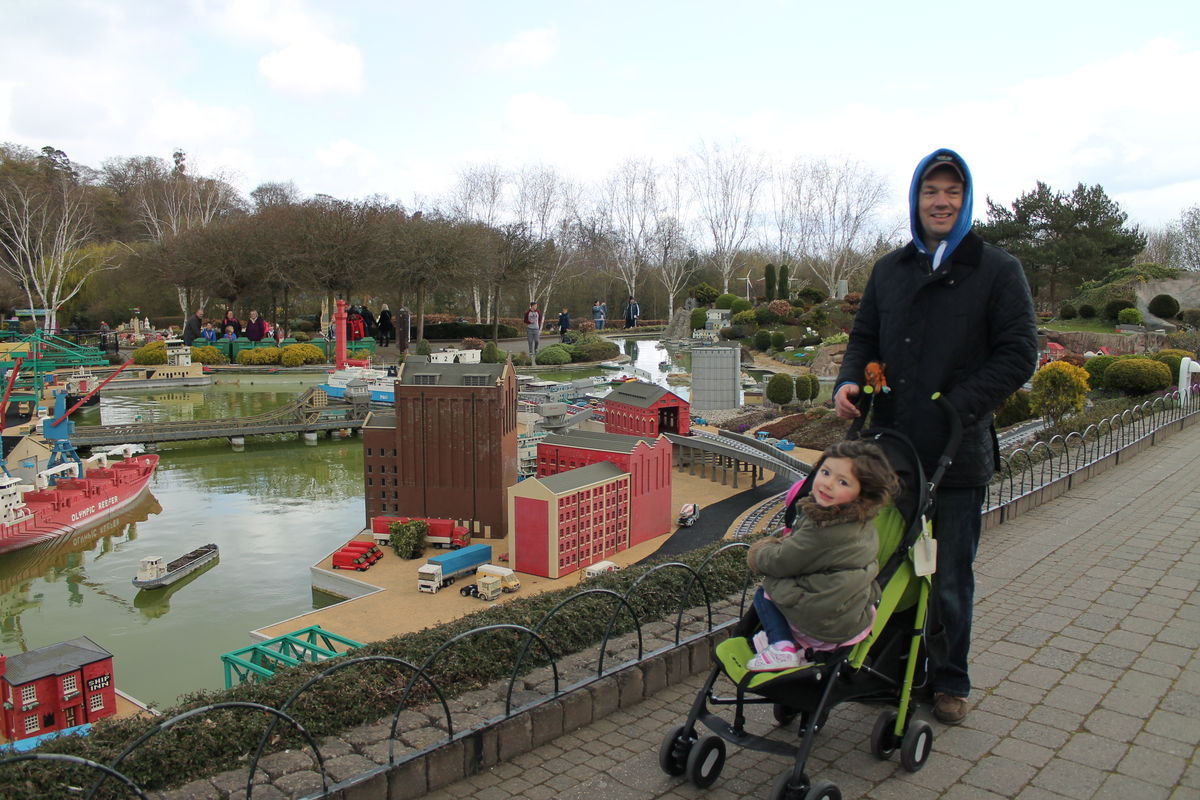 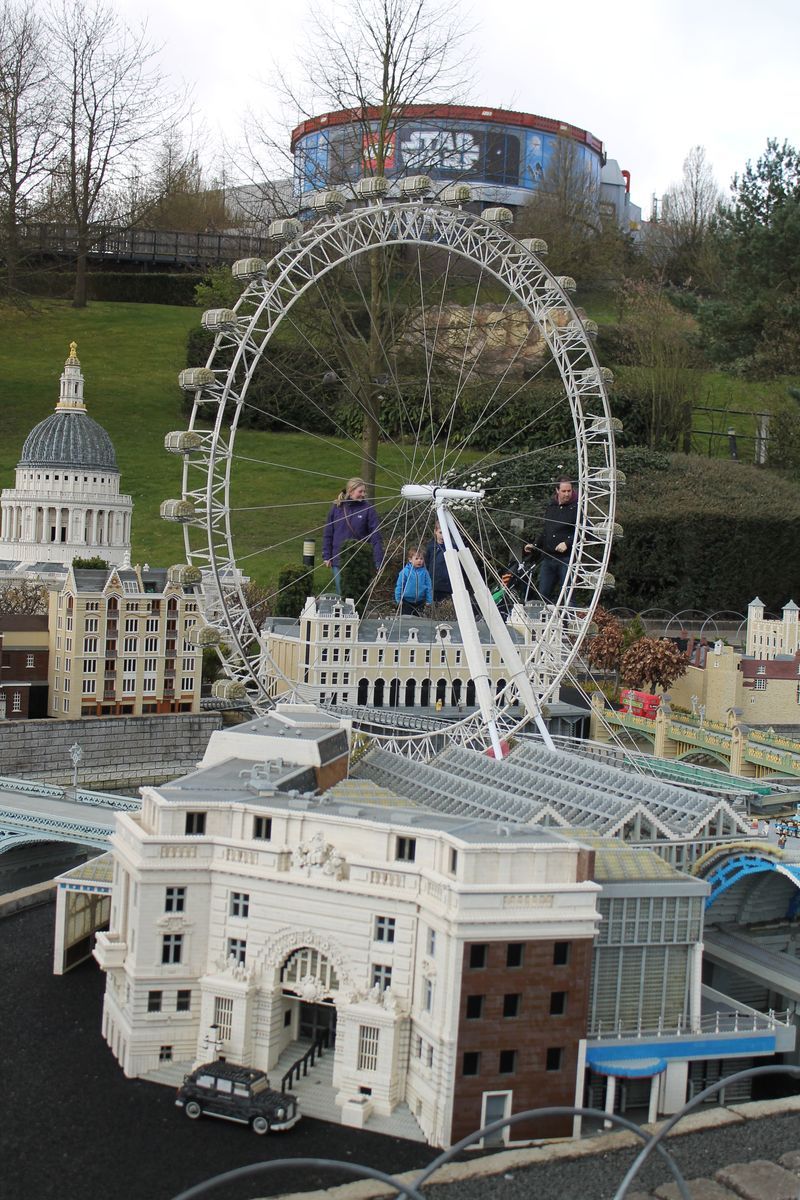 On the whole, the day was thoroughly enjoyable, and both children and parents alike had a wonderful time, leaving the stresses and strains of general life at home for the day.

But I must say, I think I left the park feeling just ever so slightly disappointed.

We knew the tickets were expensive, so our friends had collected enough cereal packet tokens together to get one adult in free of charge with each full paying child or adult (at least I think that was how it worked – it took us a while at the kiosk to sort it out!!), and E was of course free as she was under 1.

We then realised we had to pay for parking on top which we all thought was a bit cheeky!

Though perhaps this is standard in all theme parks nowadays – it just shows how long it is since we last visited anywhere and I am probably just behind the times!! 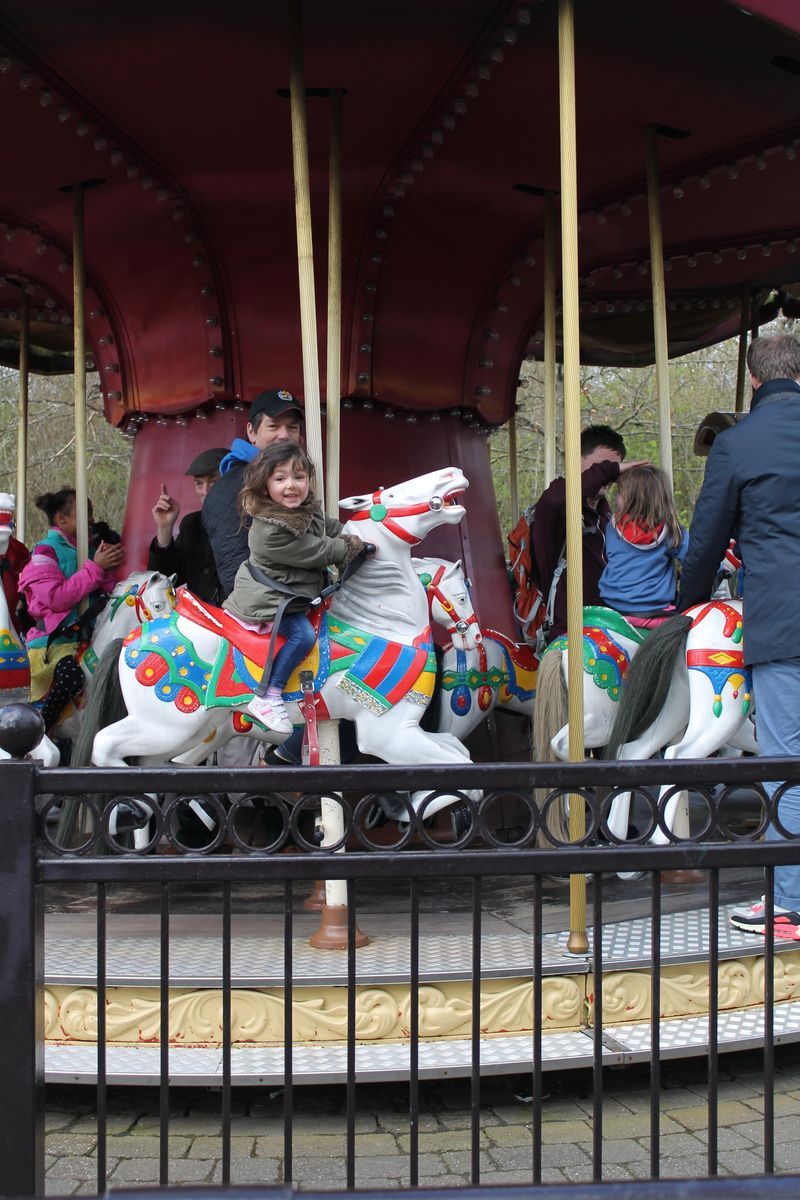 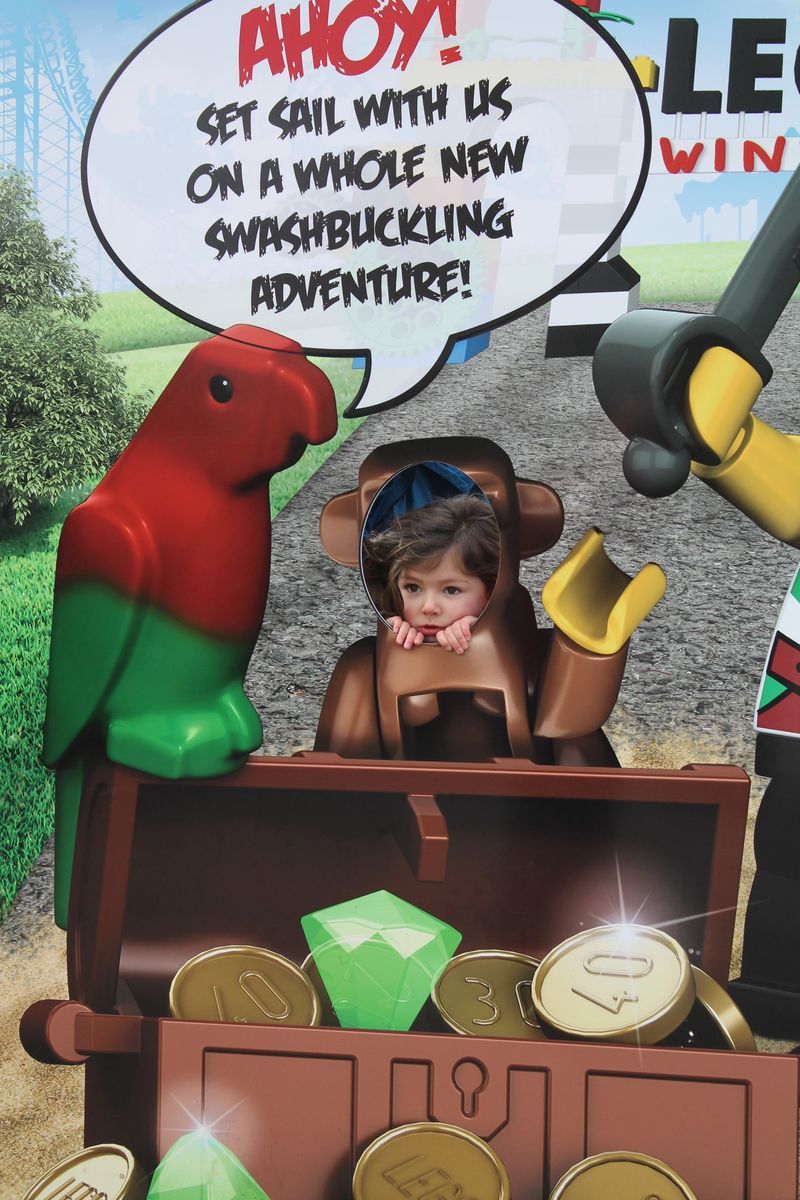 And so, forearmed with the knowledge that entry was a bit pricey, our friends had planned to play ‘party hosts’ for the day and had come prepared with picnic hampers full of freshly made sandwiches, home baked cakes and biscuits, fruit and drinks.

Leaving the hampers behind in the car (ready for ‘host husband’ to go and collect at lunchtime – lucky him!!) we all trundled merrily in through the park gates wondering with anticipation as to the wondrous rides that lay beyond.

Now I’m not sure if it was because the day was so dull and overcast, but it just didn’t live up to my expectations, especially considering the cost of entrance if you didn’t have any offers included in the price. 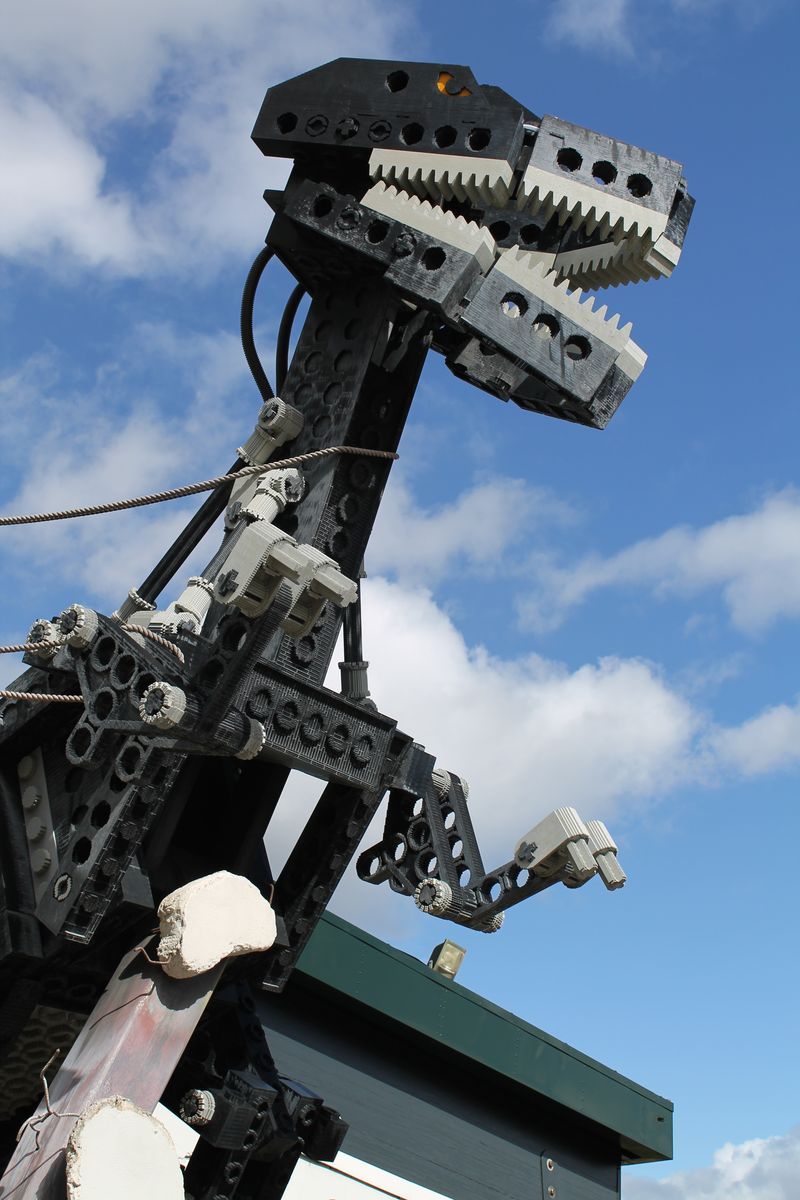 Unfortunately, the great british weather put a bit of a dampener on things – quite literally actually, as the heavens well and truly opened at one point in the day, throwing rather large and somewhat painful hailstones down from the black clouds above.

So much so, that all you could see was people scattering and rushing to take cover in any nearby shelter they could find.

It wasn’t really the weather that annoyed us, more that the park didn’t seem to cater as well as other places we’ve visited in such times. 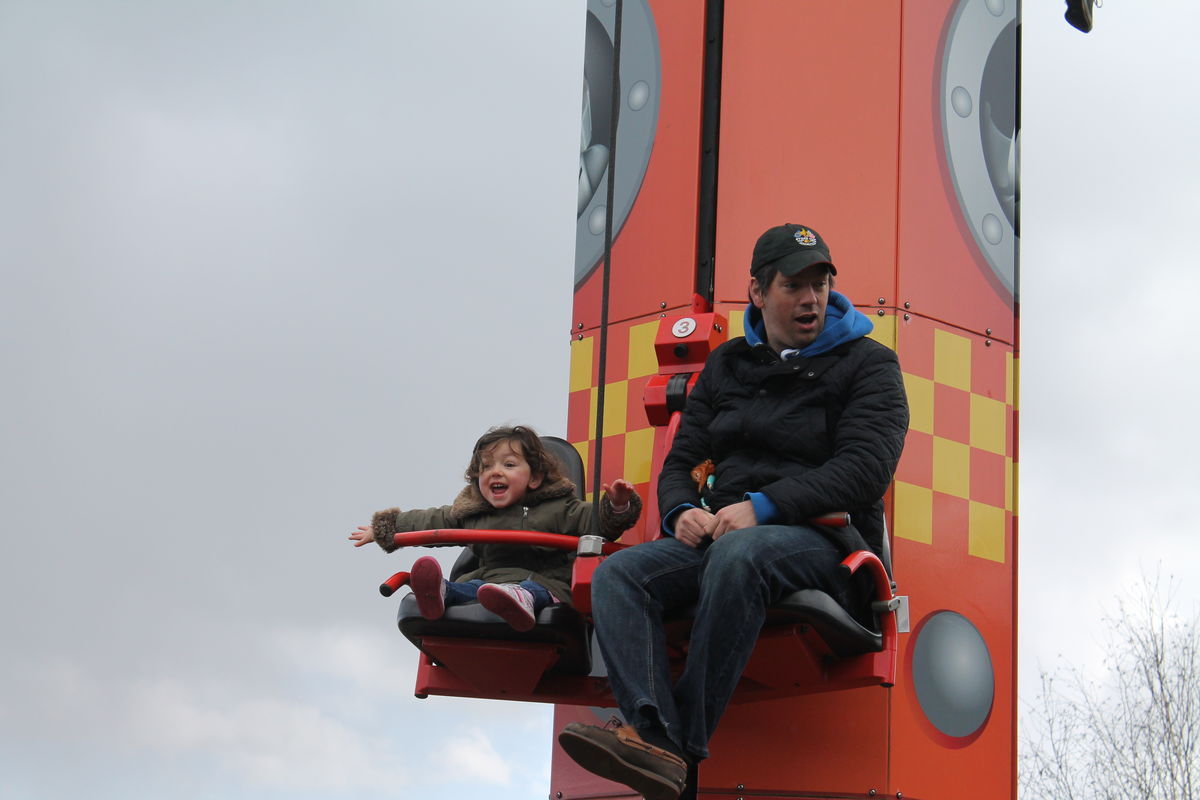 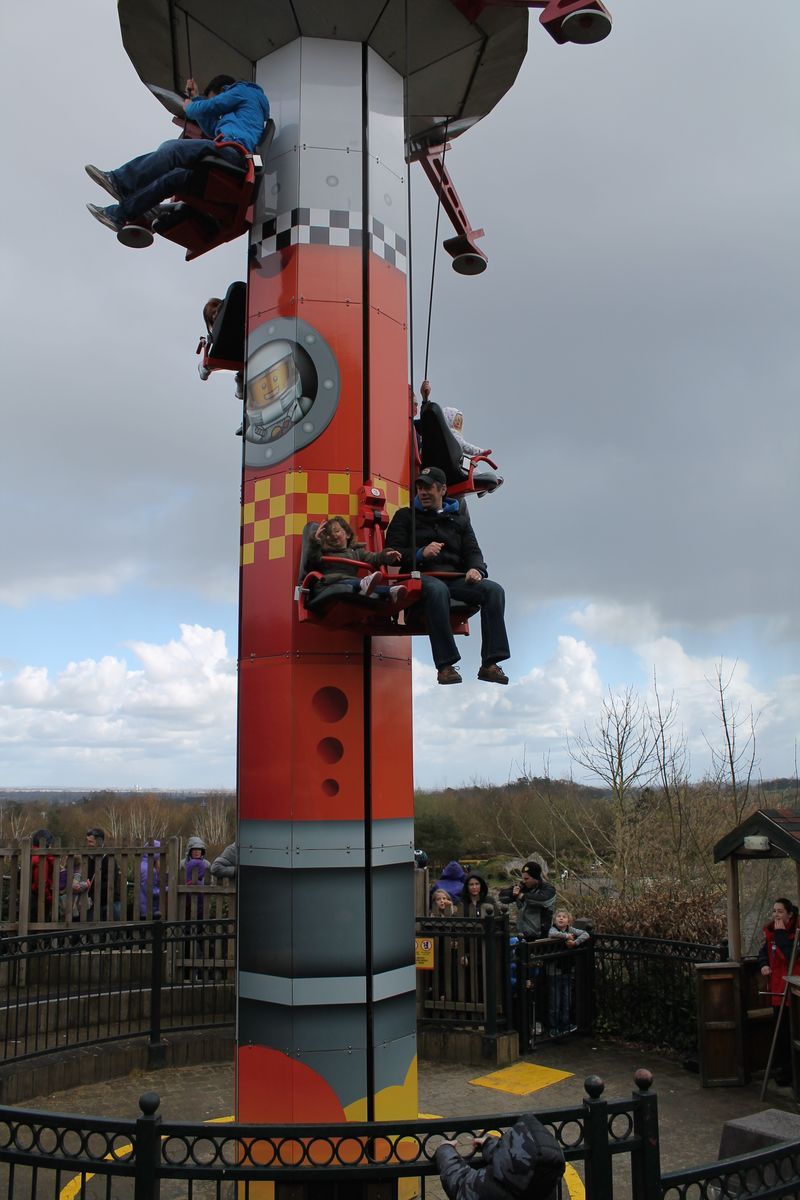 The word I was going to write here was ‘shambolic’, but I’m wondering if that might be a little dramatic!!

As I said earlier, our hosts for the day had lovingly prepared picnic hampers to try and cut costs as much as they could for the group, but due to the wind and rain we had to eat in the only place we could find which was sheltered.

This took us a while too – as we weren’t too clever when it came to reading the map!!  It was only when one us figured out the key that we all ran in the right direction!!

The only place we could find on said map, that was covered/indoors was a ‘pay before you eat’ buffet type canteen.

You basically paid, £10 per person, before being shown to your seats from where you could then head on up to the buffet counter and eat as much as you like!

The queue to get in was ridiculous, as obviously everyone was trying to do the same thing (hide from the wind and rain) and the poor  staff were being prompted by their managers to apologise to the visitors at five minute intervals!?!

So in the end, we got inside, paid and managed to get the staff to set up an adequately sized table to fit 11 of us, which was tricky as the place was just heaving, but bless them, they did it.

It was all a bit of a mission, but we really did all have a lovely time.  The adults sat back chatting as the children all giggled and generally made a mess.

Lunchtime culminated in all of us singing ‘Happy Birthday’ to the birthday girl, whilst she proudly blew out her four candles (ha, ha – you’d be laughing too if you know of a certain ‘Two Ronnies’ sketch I’m thinking of) on her beautiful homemade birthday cake.

It was just such a shame that this was the only option available to us, when lunch had already so kindly been catered for.

So of course, we made sure we got our moneys worth and returned to the counter for seconds (and in some cases, even thirds!!) 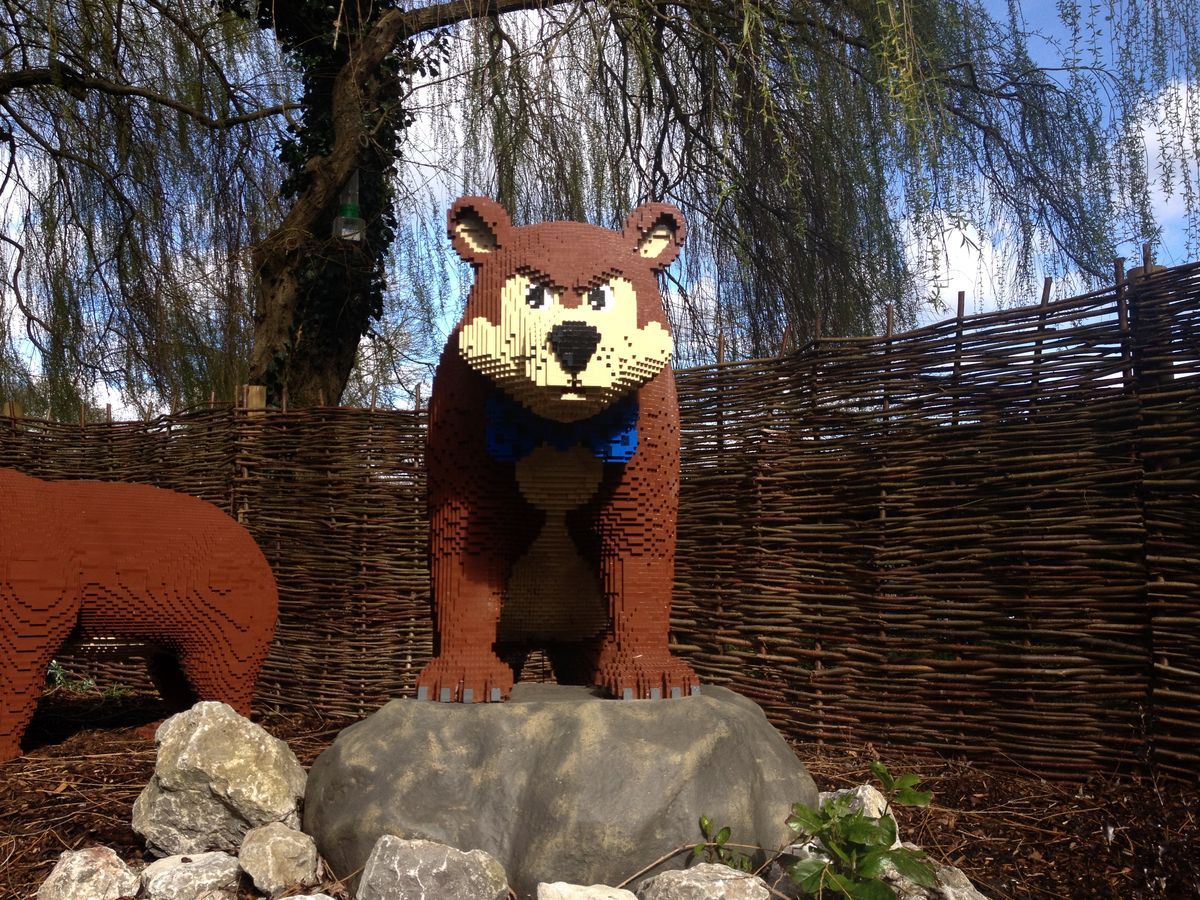 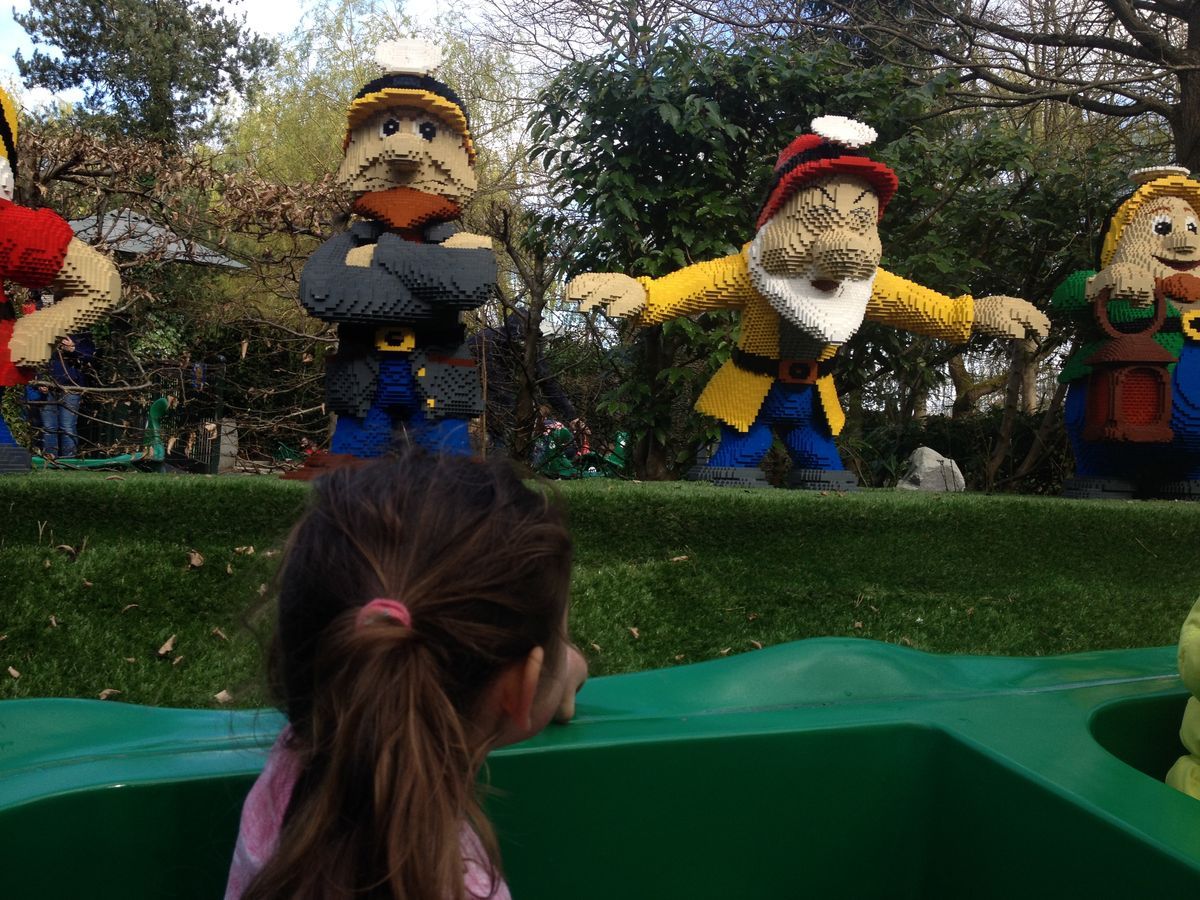 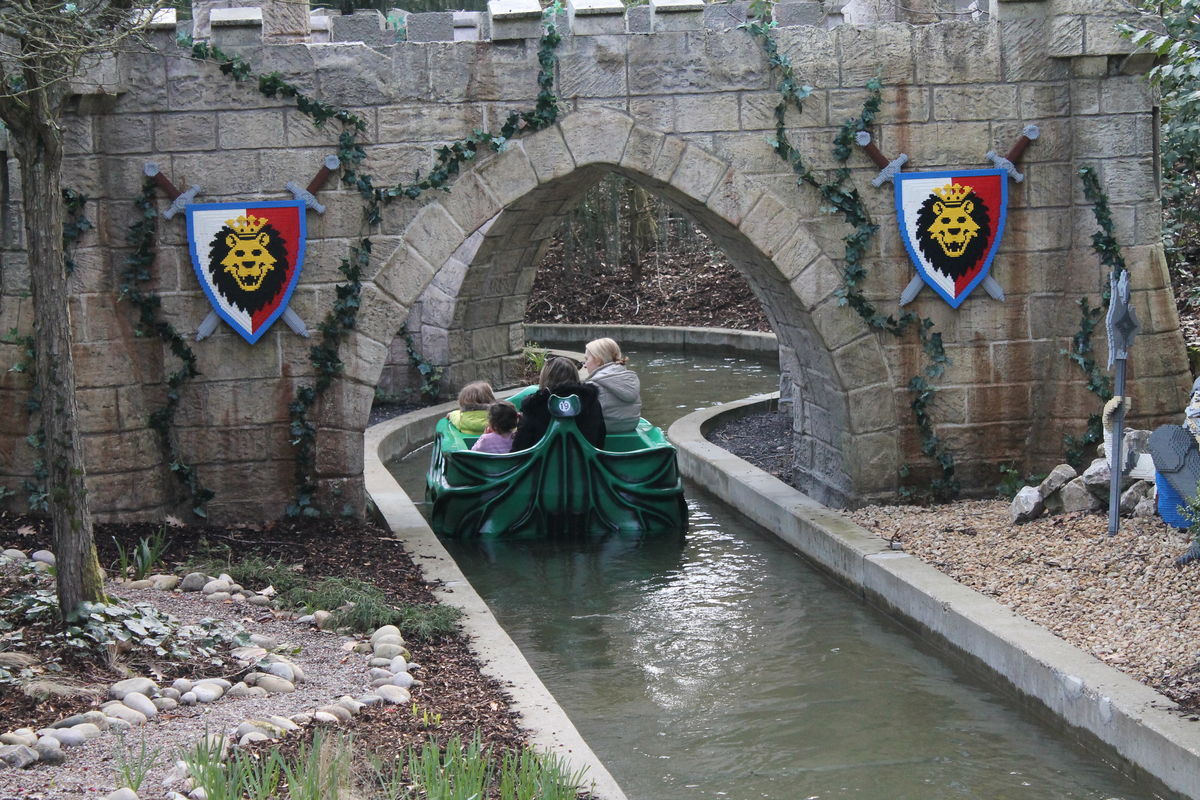 I think the general feeling was that for a theme park in England, with such changeable and unpredictable weather, you’d have just thought, or at least hoped, that more provisions were made for outdoor undercover seating, where you don’t have to pay for a full on meal!

Anyway… complications and frustrations aside, the sun eventually decided to show its face, so we made the most of the rest of the day and went on as many rides as we could.

We couldn’t go on any of the larger rides as the children were just an inch or so too short still (though who am I to talk!!), but heh – the queues for these ones were also rather long, so at least we had more time to do lots of smaller rides. 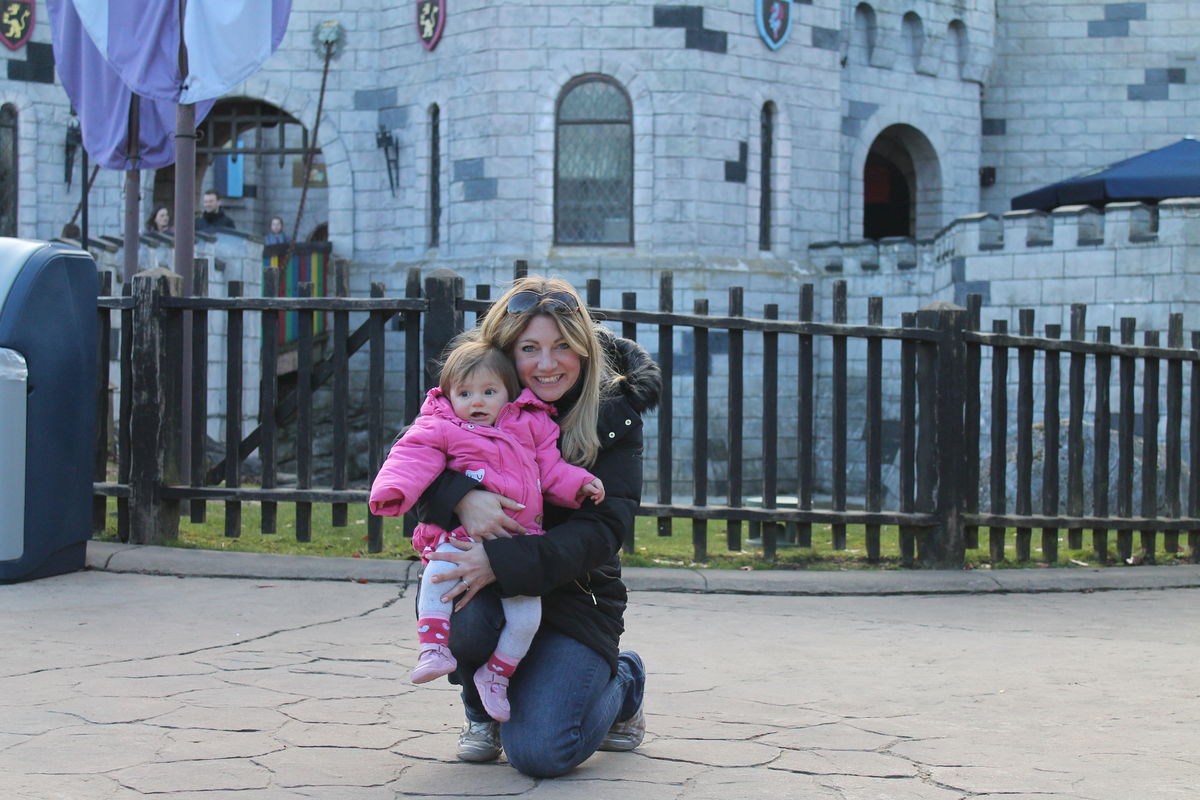 All in all, we really did had a fabulous time (although I sound like a total misery!! – perhaps I forgot to take my happy pills this morning;)

The children had such a great time that they were thoroughly worn out by the end of the day.

And so, the children all armed with their party bags; the parents all armed with leftover picnic (sandwiches, drinks, home baked cookies and cakes!!) , it was time to head home.

We will most definitely return when the children ar a bit older (and taller!) and perhaps this time the weather will be kinder to us.