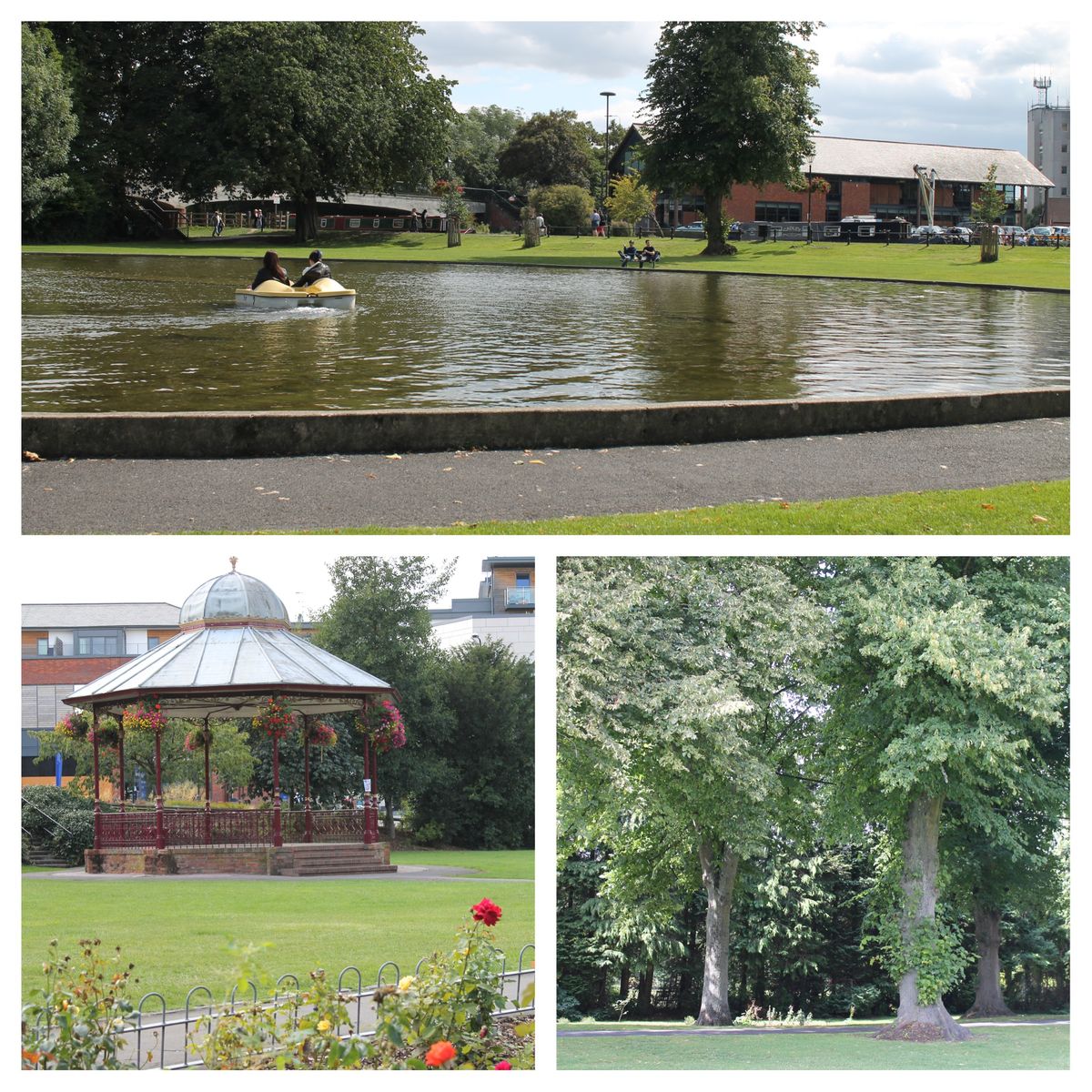 It’s been a wee while since I’ve dedicated a post purely to what we’ve been up to as a little family lately, so I thought it was high time for another.

Another lttle glimpse into the life of midlife mummy!

It really is quite amazing and actually very scary how time just seems to fly.

That means it’ll soon be the dreaded October – it’s pretty much birthday month for many of my family – me included, so is always a rather expensive one, with the next stop being Halloween and Bonfire Night, then the dreaded ‘C’ word!

We’re off on holiday in just a couple of weeks’ time and as with everything else there just never seems to be enough hours in the day to fit everything in.

Having had a run of busy weeks and weekends lately, Mr B and I were rather looking forward to this weekend, as we planned to just have a relatively quiet one. With both of us being at work full time, and busy weekends the house has been rather neglected, so we really had to spend some time just sorting a few things out.

We’ve tidied up and cleaned, started putting aside things for the holiday, collected our tickets, figured out some finances etc and basically have just got ourselves in gear.

All the boring stuff I know – but to me they’re the type of things which would otherwise just loom overhead and bug me until I’d done them.

In with all this though, we still managed to get out each day with the girls. We knew that Saturday was going to be dry, so we walked into town and to the large central park.

Which, funnily enough is where I spotted ‘You Baby, Me Mummy’!!!!

So I just had to go over and introduce myself!!!

So after a quick chat and a hug it looked like our children were about to run off in different directions (well, mine were anyway!) so we said our goodbyes/must meet-ups etc and chased after our kids!

Do you know – I honestly don’t know how you amazing single parents out there manage it! Without Mr B for that one hour, I’d have been lost/knackered/in a daze/ in need of a gin!

He had to pretty much look after one, while I concentrated on the other!

H is obviously that little bit older than Little E, and lately she has become far braver in her pursuits. I think this stemmed from the waterslides of Centerparcs, which has been nothing but positive in more ways than one.

So with H scaling the high climbing wall to reach the large slides at the top with the ‘big’ children and me grimacing and holding my breath at the bottom, Mr B was in charge of Little E over on the smaller apparatus. 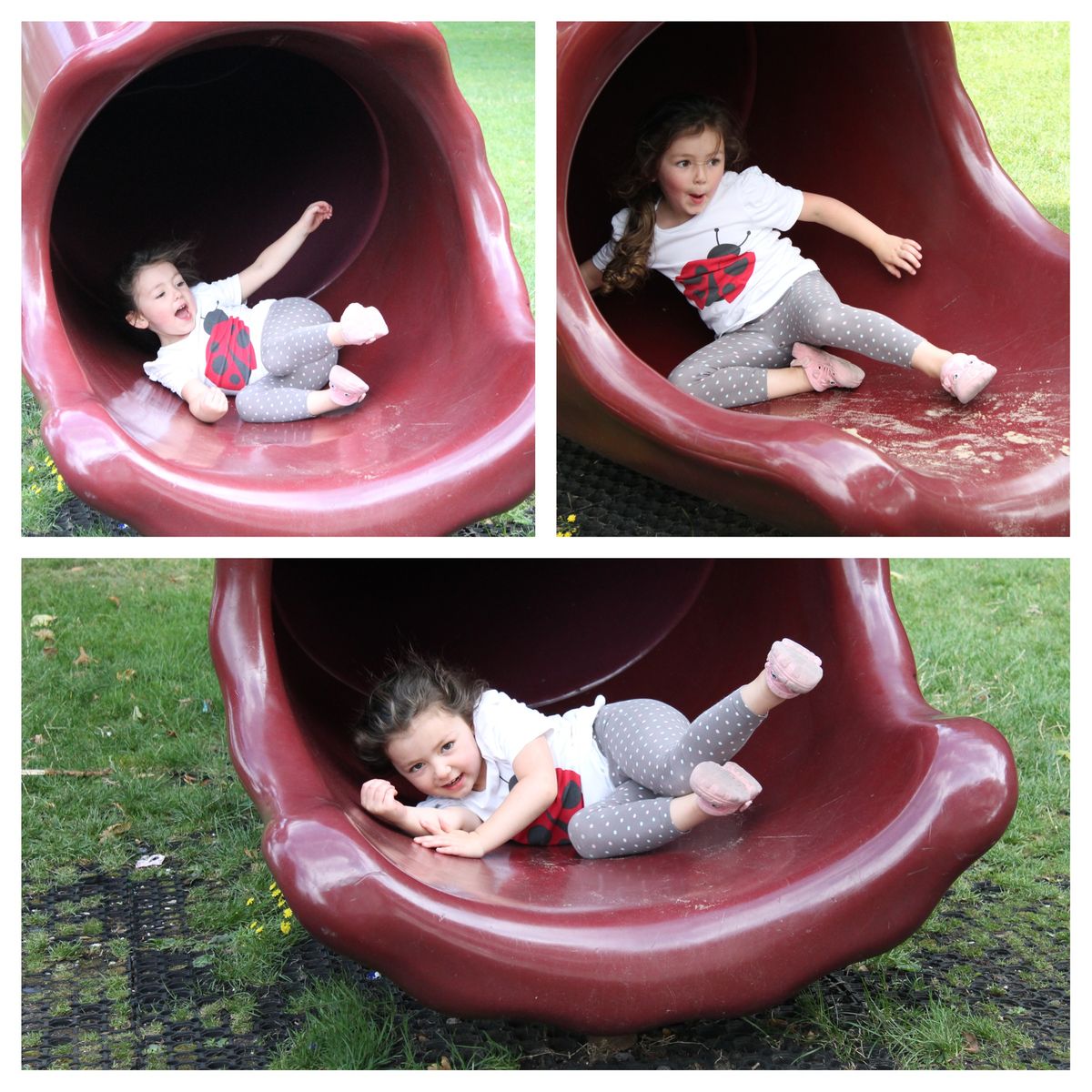 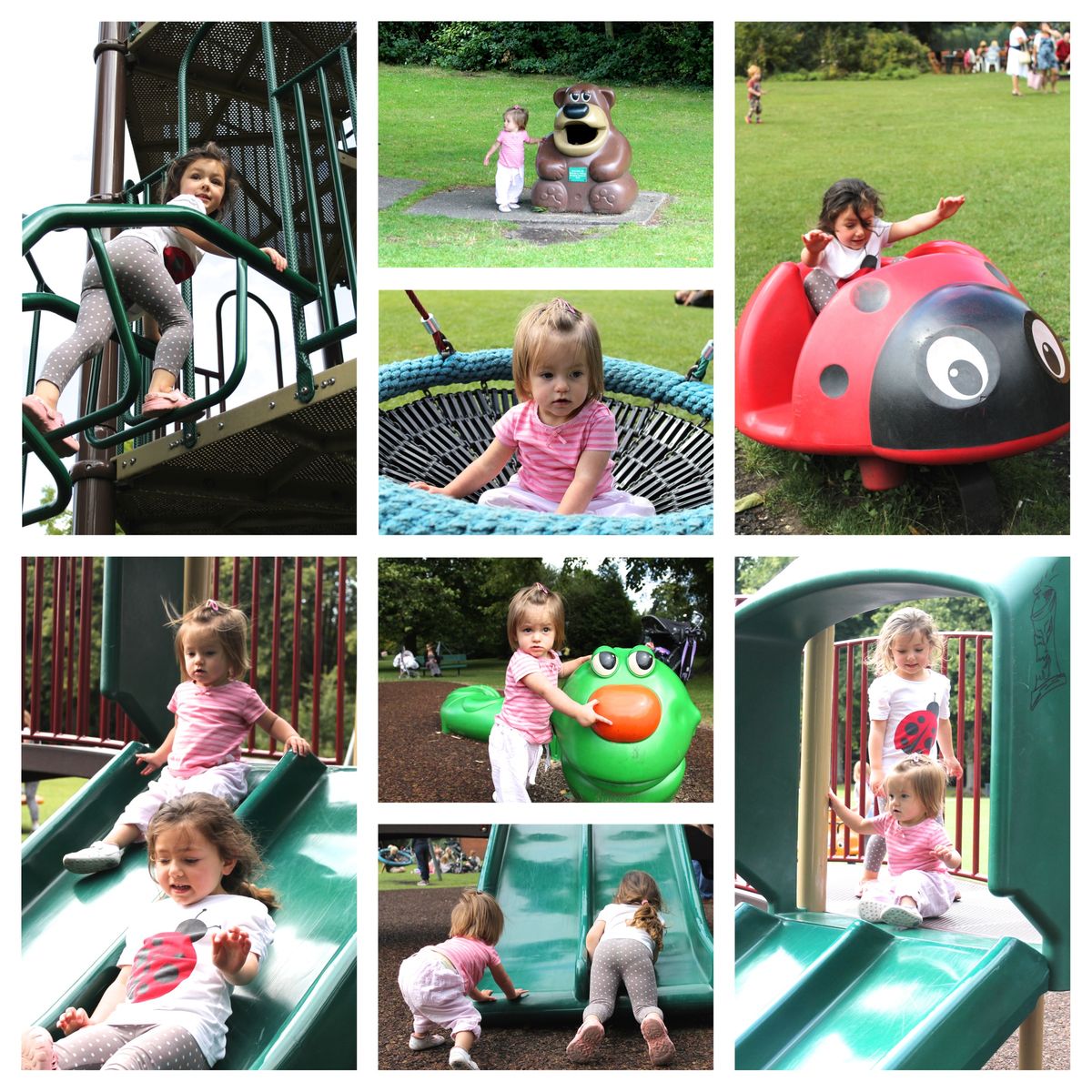 At least I thought Mr B was in control.

All I can see is Little E running wild among the other children, and Mr B, led back on a caterpillar thing playing bloody candcrush!!

So after a little but rather public spat with me also giving the daggers look, Mr B got up and got back on with the task of childcare!!

Again though, we were both off in different directions.

Little E just couldn’t really make her mind up what she wanted to play on at all. One minute she’d be asking to go on the swing, the next minute, the roundabout, then the big kids came and scared her off that, then she’d try a rocker thing!

Unfortunately for us, of all the playthings set out in the park, the one thing she was rather taken with, was the bin!

Ok – so it was a teddy bear bin! But it was still stinky and disgusting!

Then finally we found something for them both to enjoy together. A brilliant double slide. It was only a small one, but just right for Little E, and just enough for H. But best of all was that they could play on this together. 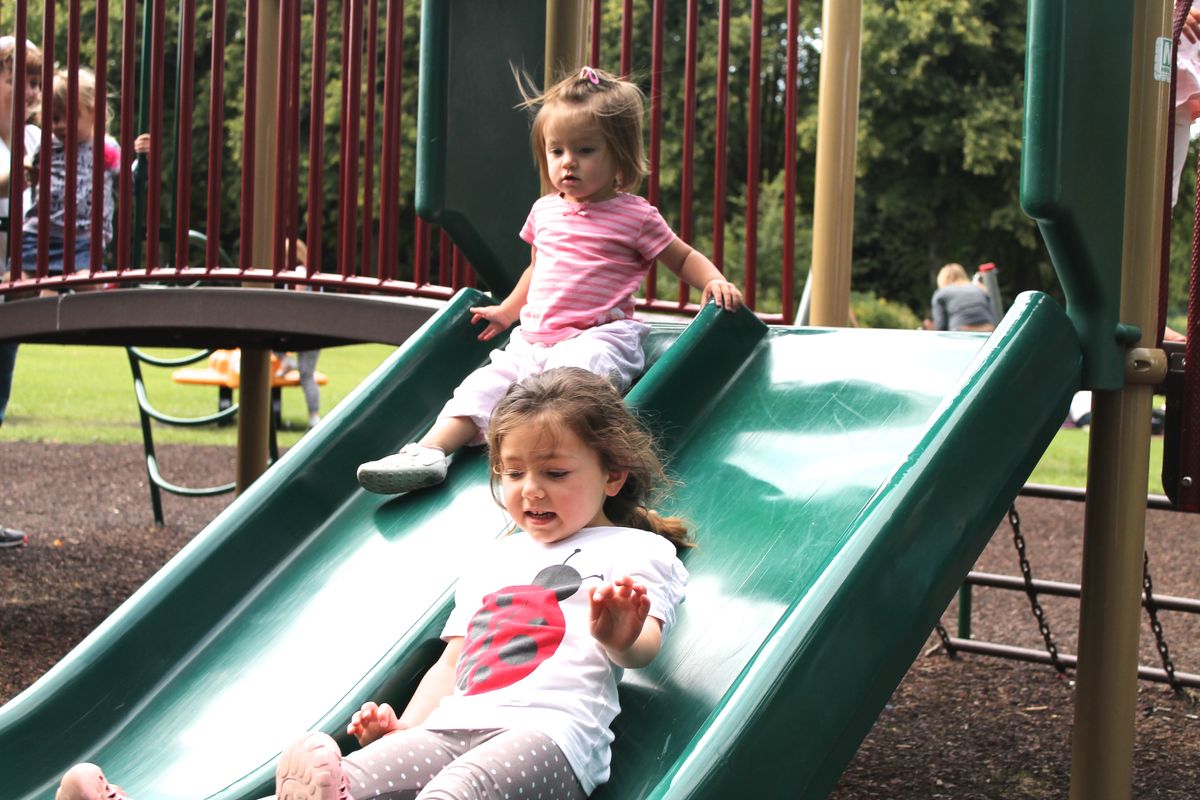 Then it was time to go home.

Though this news wasn’t what Little E wanted to hear!

She had the most tremendous tantrum, everyone was looking in our direction, there were people laughing at us, groups of people having lovely quiet, Saturday afternoon picnics with their well-behaved children just staring at us and judging us, and other little children who just stopped and gawped!

I wish the ground could have swallowed me up!

I was ‘that’ mother!

The one who can’t control her kids!

(And I am totally dreading our four hour flight to Greece in a few weeks’ time!)

Anyway – have a look for yourselves – I think the pictures are pretty self explanatory! 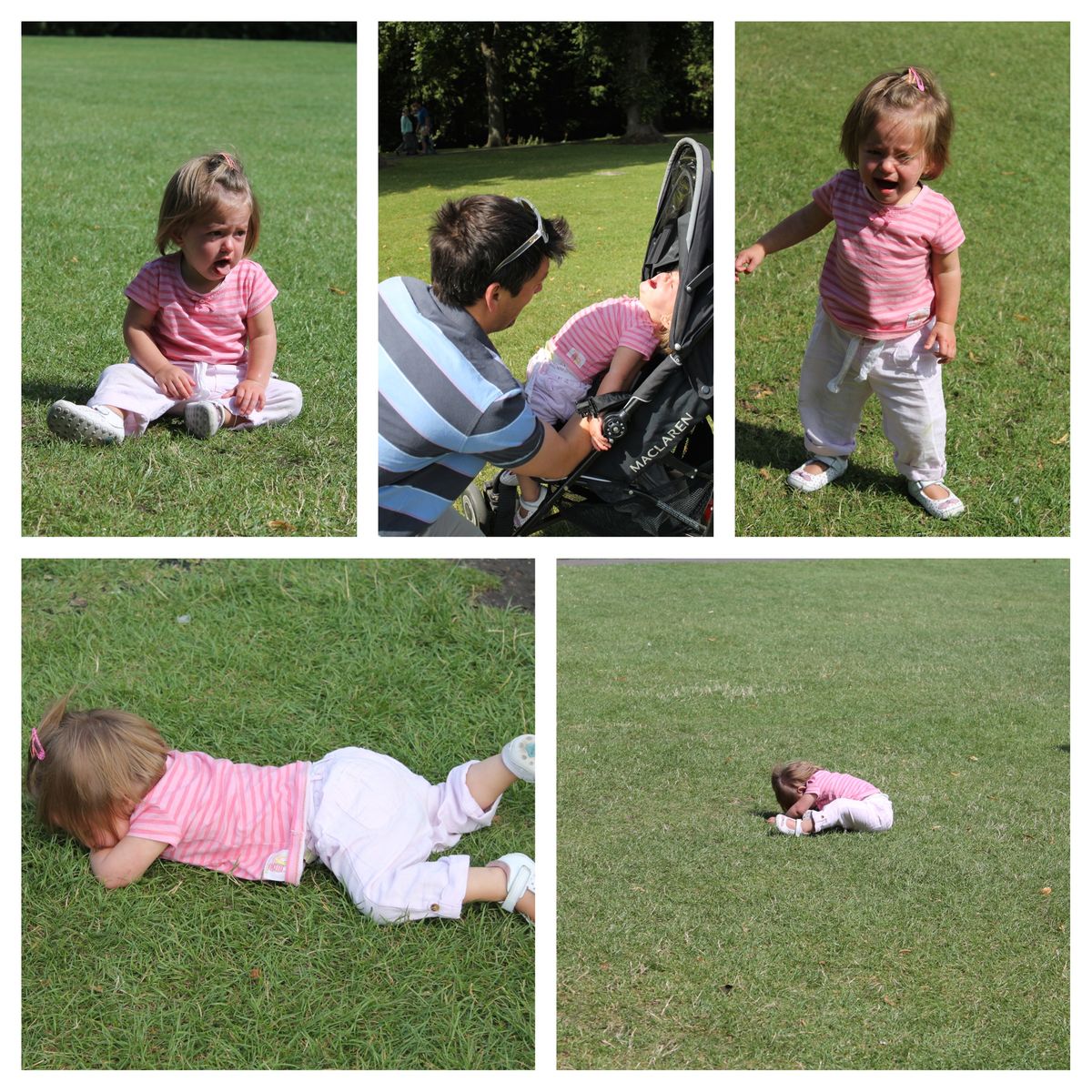 Once we’d finally manage to peel Little E off the floor, it was time to put her in her buggy.

So, with an even bigger tantrum and the strength to rival a bear, we pretty much had to karate chop her in the middle to bend her just enough in order to strap her in!

(said in jest…. We didn’t really karate chop our child!!!)

We were both pooped and rather sweaty! 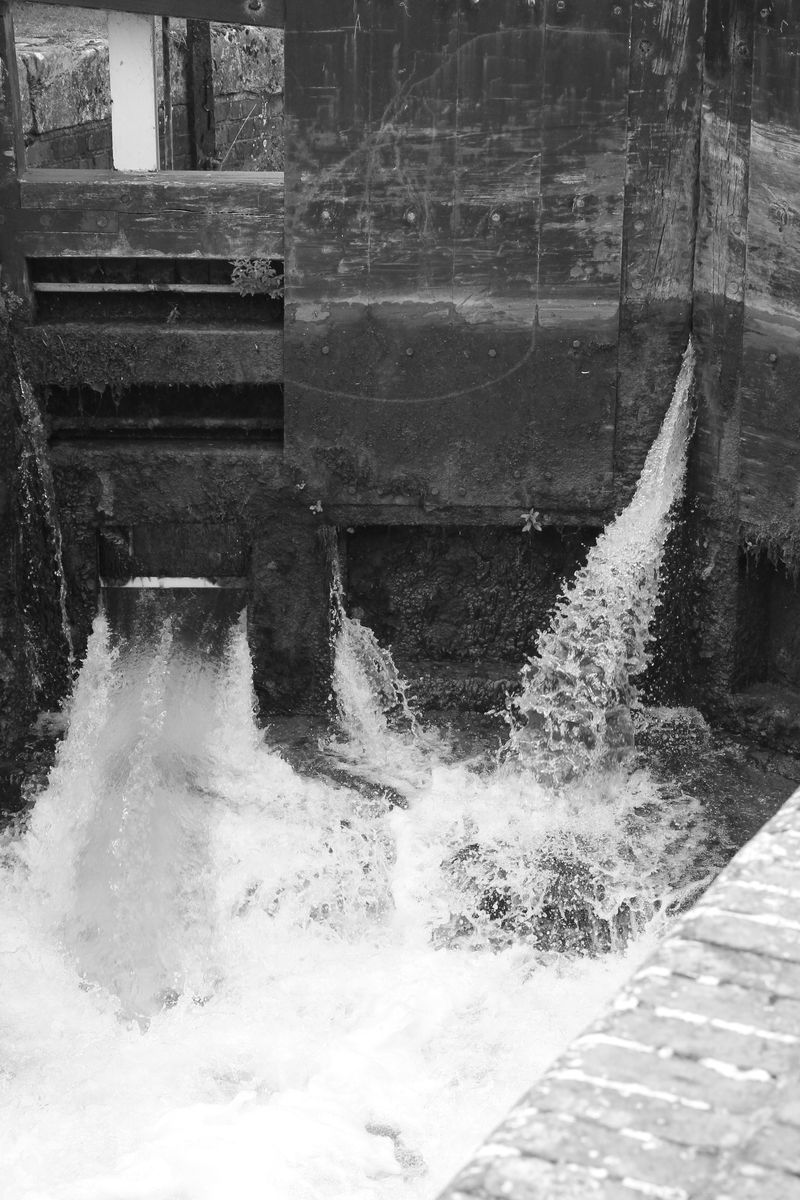 We decided then to walk the scenic route home along the canal to calm everyone down and just chill out again.

It is so picturesque to just amble along the towpath. The canal was a hive of activity too.

Lots of barges and canalboats all patiently waiting their turns to pass through the lock gates. 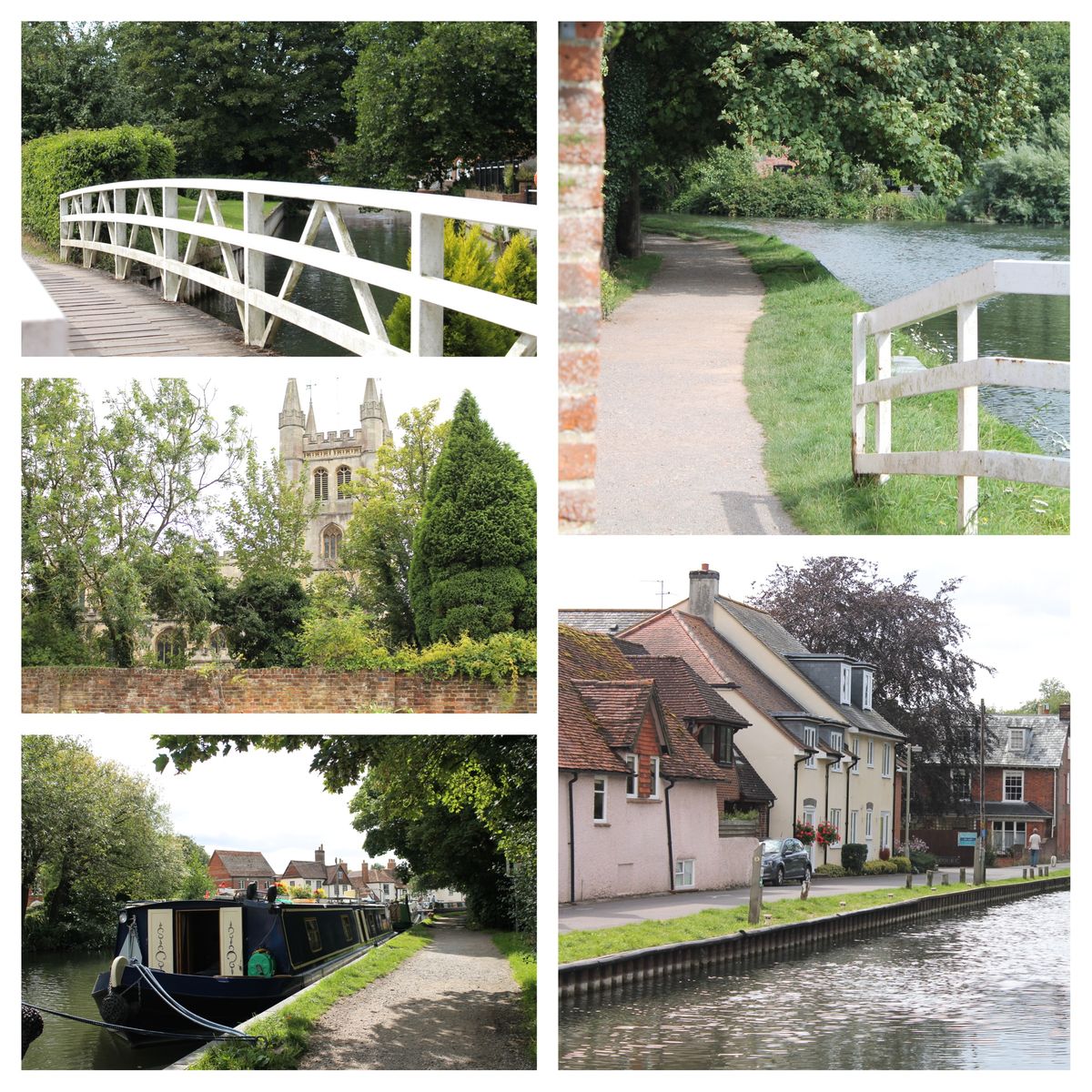 We stood and watched for a while and I chatted to random passers by.

It was so lovely. 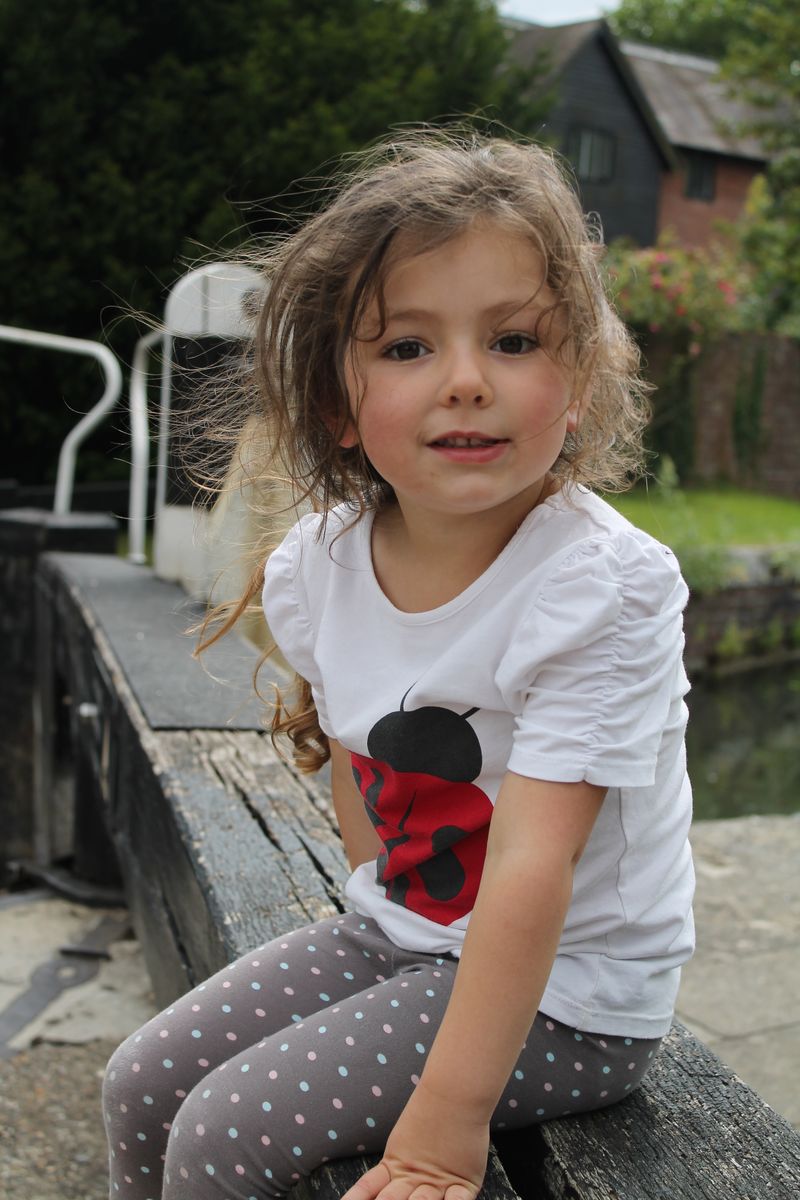 On Sunday, we had a very lazy day.

Well I did anyway.

Mr B took the girls to the swimming pool as I said I wanted to get on with some more housework.

So, I kissed them goodbye, said ‘have fun’ and shut the door behind them.

I trundled into the kitchen, made a cuppa and some toast and then went through into the living room, popped on the next True Blood episode and put my feet up for a bit!

We then went round to my parents for a late lunch. It was yummy roast pork, with chocolate gateau for pudding!

So it was actually a very lovely weekend, we managed to get a lot of things ticked off of our ‘to do’ list, managed to have fun playtime with the girls and got round to visiting family. 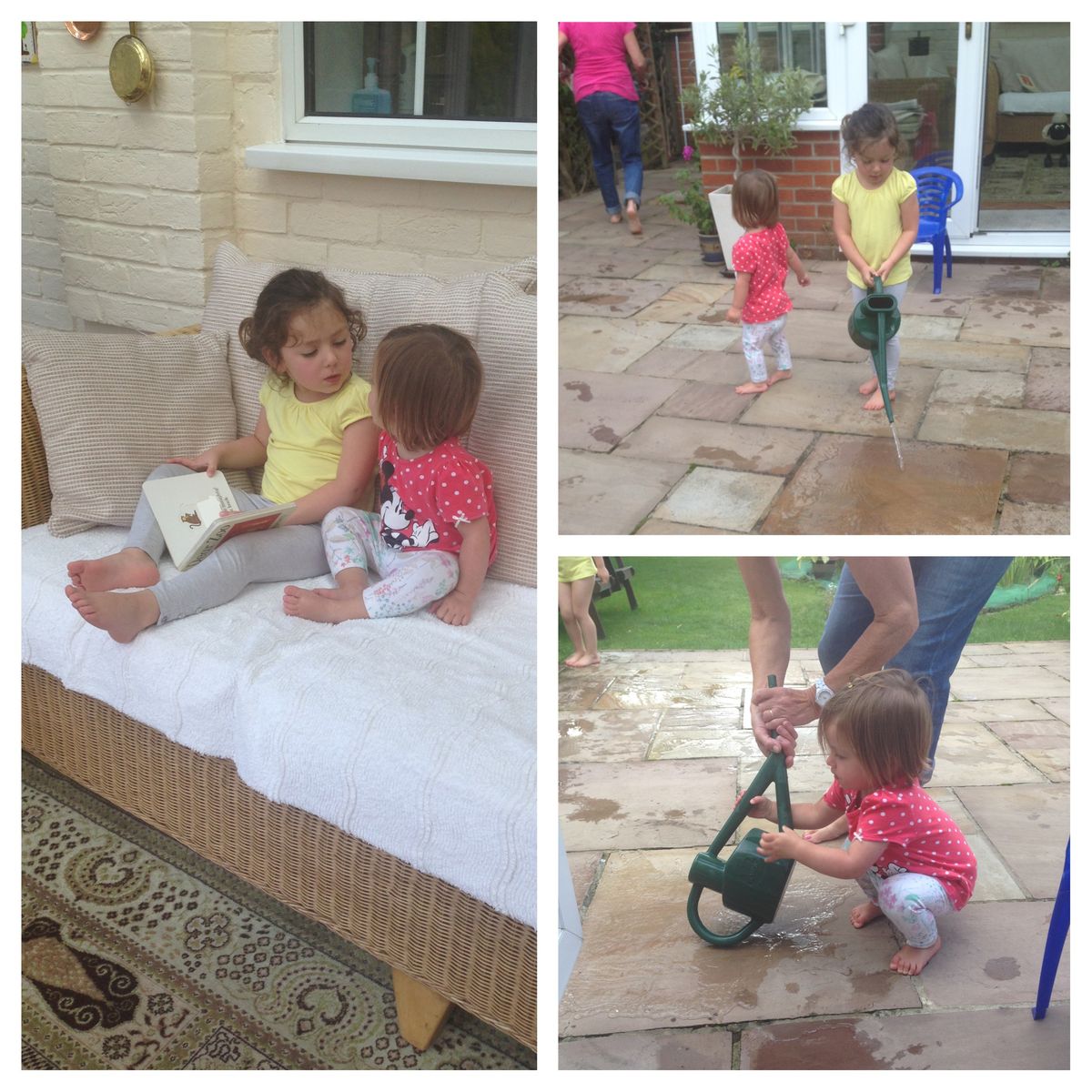 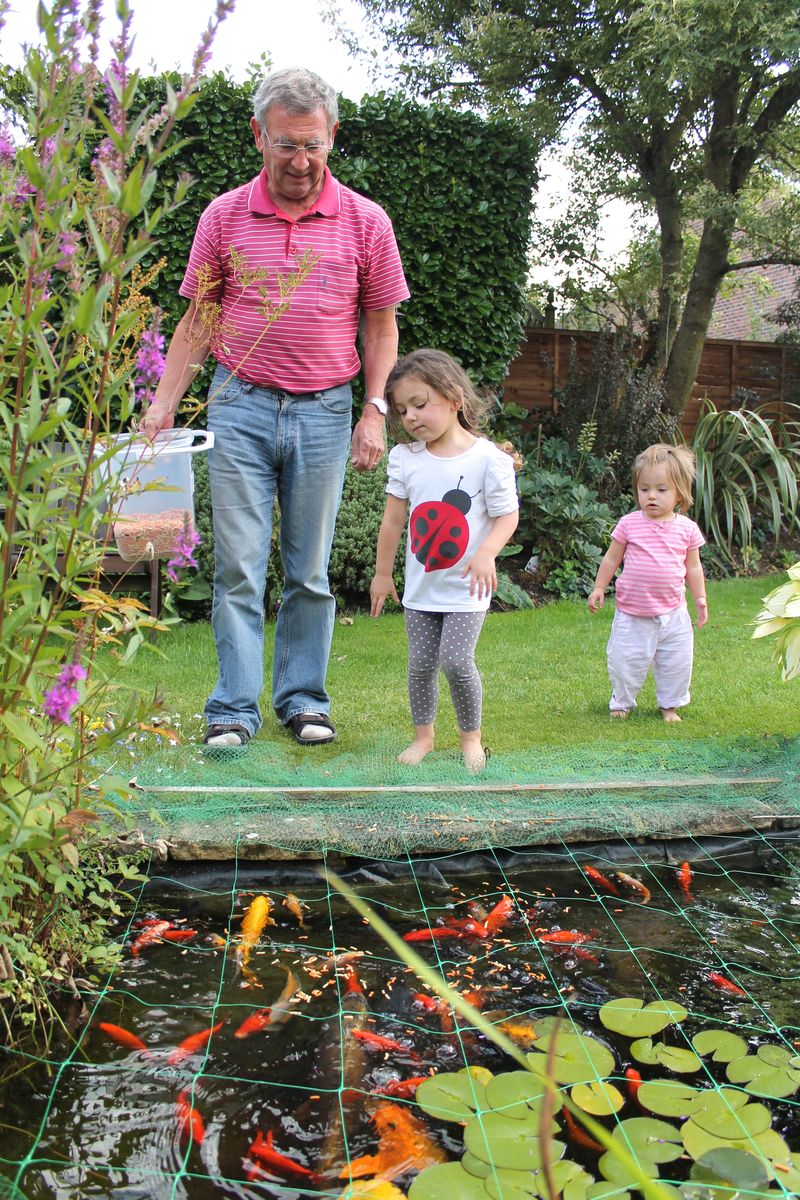 I now feel very relaxed and ready for my week of work!

I’m still knackered and want to go back to bed!

Roll on next weekend!!

(Ugh – second thoughts….Mr B is away on a golfing weekend!!!!………Helllllllllpppppppp!!) 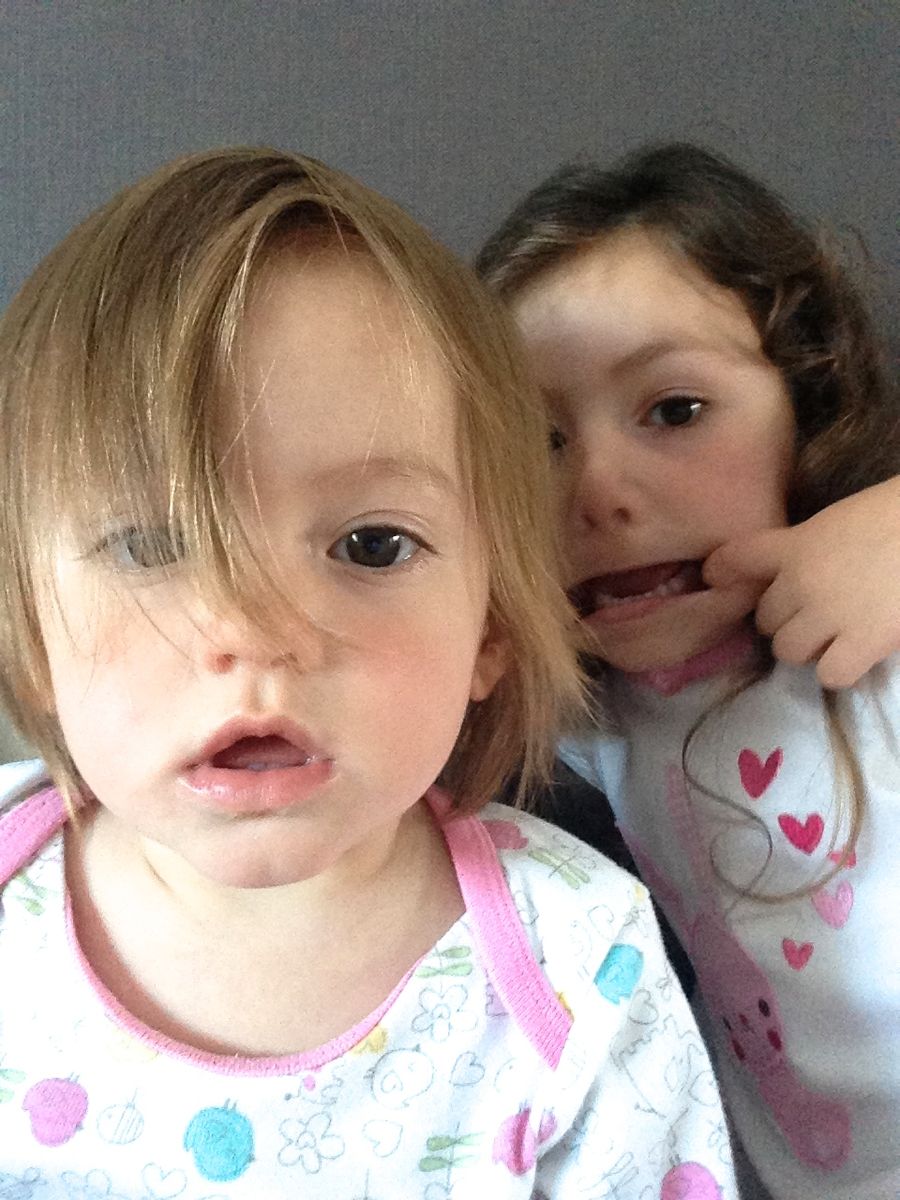 Just before my terrors were put to bed. Still hyperactive!