It’s that time of the week once again to join up with the fabulous Heledd of Running In Lavender for her new and might I say, totally awesome linky My Captured Moment, which prompts us each week to share a treasured memory of our past or present.

So this week, I am going to travel back just a couple of years to the day that this was taken. 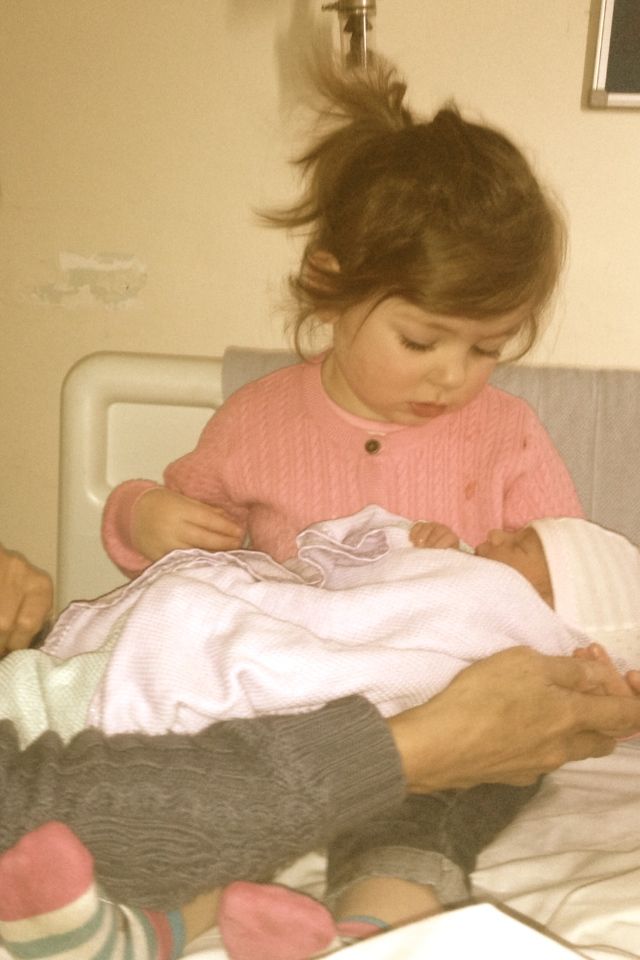 It was the first moment that my beloved H was introduced to her beautiful new baby sister Little E.

I can remember this moment so very vividly.

As I look at the picture whilst writing this, I have mixed emotions, and tears are forming in my eyes as I recollect that day.

I remember the sheer delight as I lay in my hospital bed next to my beautiful brand-new second daughter, once again indulging in the happiness and excitement of having brought new life into the world, though still full of the anxiety and anticipations it brought along with it.

Then on the other hand there was the guilt. Huge pangs of guilt over being made to stay in hospital (due to my raised blood pressure) away from my other beautiful daughter who was missing me and needing me.

So, that moment when the door opened and H walked in with her Grandma – all shy and bemused, I was an emotional wreck.

I was elated that I could introduce the two of them, I was excited that H was going to say hello to her baby sister for the very first time, I was over the moon that I was able to have my much missed and longed for cuddles with H again but I was sad too at the knowledge that the hugs would be short lived and that I would have to say goodbye to her at the end of the visiting hours.

I just wanted to go home and spend time with my new family of four.

And I remember as Daddy placed Little E oh so carefully onto H’s little lap, and how she cautiously and apprehensively held her sister, gazeing down at the little baby all snuggled up and hidden in the soft blankets.

Then H’s poor little nose started to run a little, it had been cold outside, so she looked up at us with her big eyes asking quietly for help. And I know this sounds silly, but I was heartbroken all over again, as I realized I had two little baby girls who both needed my love, care and nurturing.

I know this seems as though it was an unhappy memory, a rather sad captured moment rather than anything else, but I don’t really look back on it like that. I still love that memory. It was just a fairly intense one. One that obviously I wouldn’t and couldn’t change for the world, but something so vivid in my past that I will remember forever.