Well sort of anyway. The festive season has well and truly begun.

This weekend saw me off on my first Christmas party of the year, we chose our fabulous Christmas tree and it also welcomed a new little man into our house too.

So firstly yes, I was out for a department Christmas do on the Friday night which was very lovely indeed. It wasn’t my own department but I’d been invited along to my sisters departments ‘unofficial party’ which was fab. Any excuse for a night out and a spot of dancing, as it’s something which doesn’t happen often nowadays so is always very welcome.

Also on Friday we welcomed Elfie into our home – our brand new Elf on the Shelf. 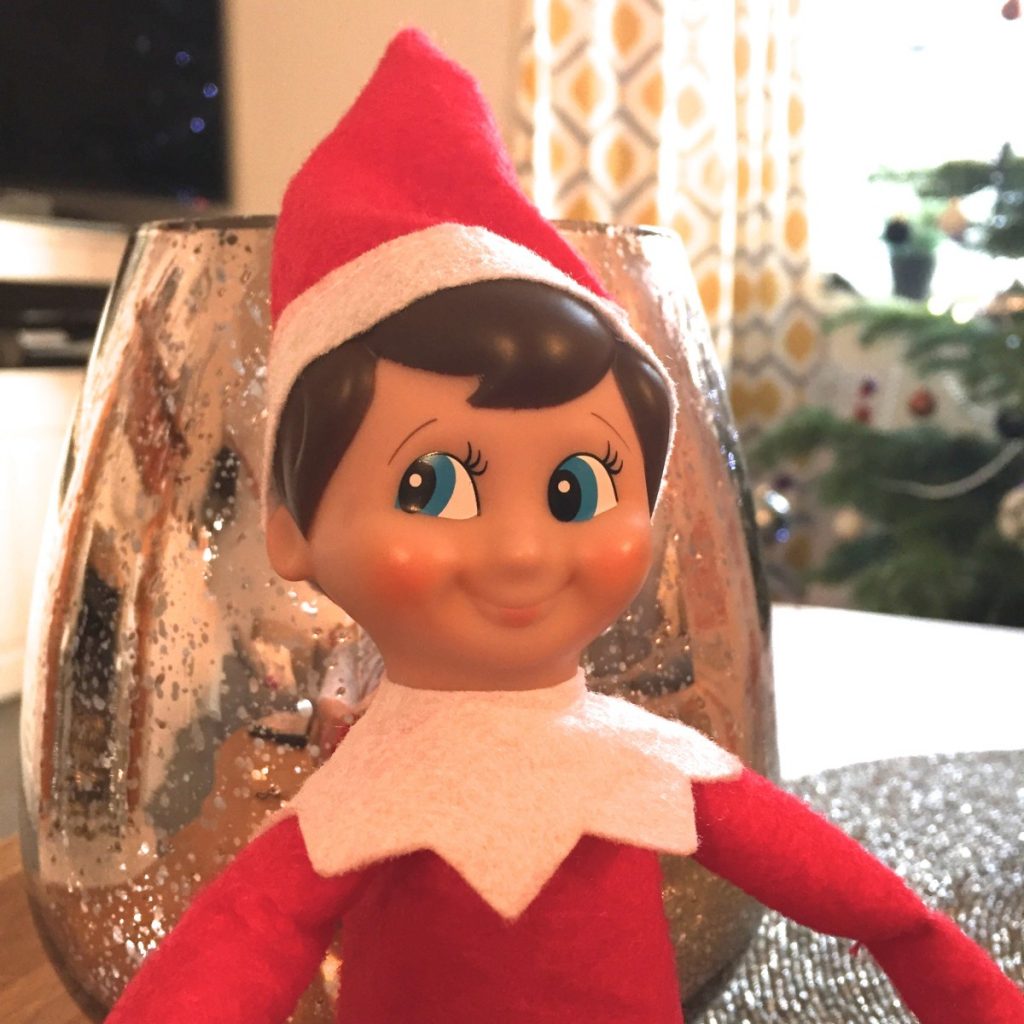 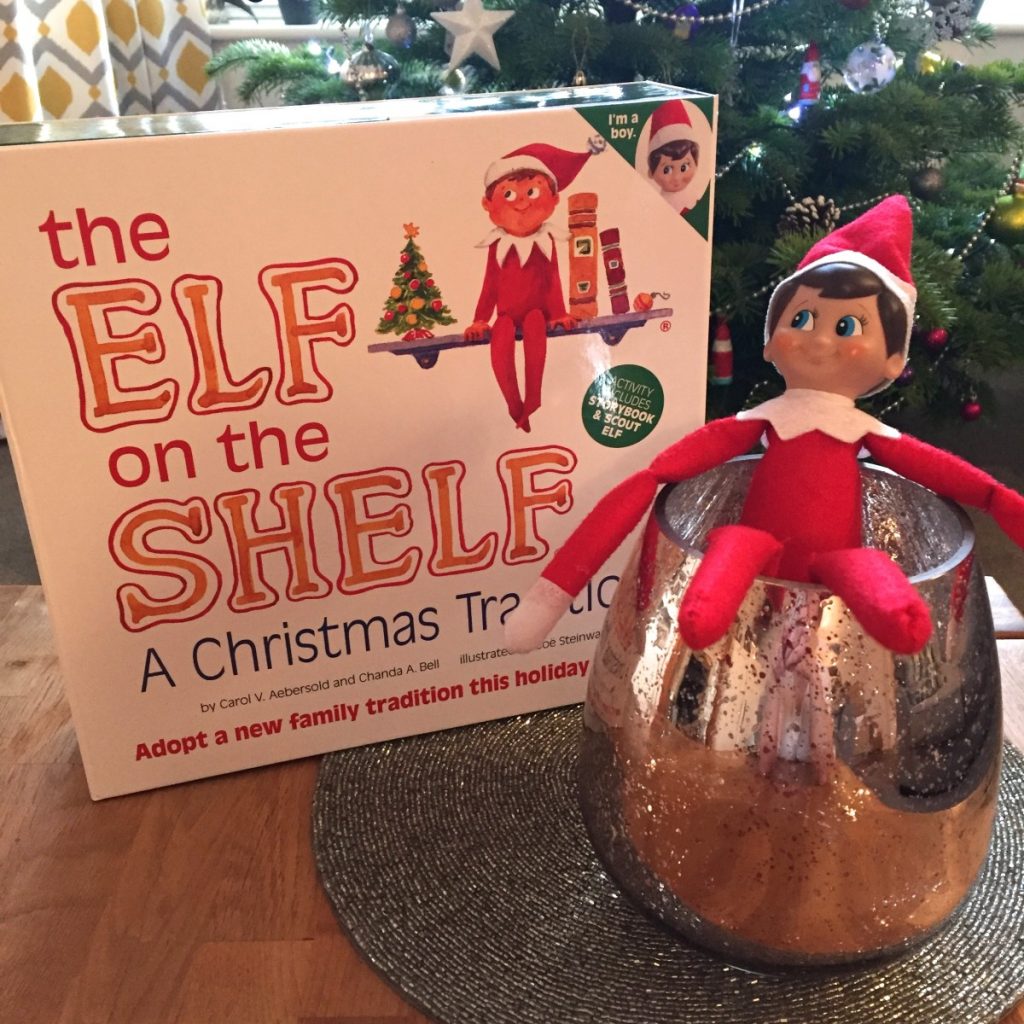 Ok, yes I know I was a little late to the party, but I thought I would tell the girls that he had got stuck in North Pole traffic if they asked or caught me out.

Which of course they didn’t.

After all, they are only five and two, so they really didn’t care. All that mattered to them was the excitement and magic of his arrival.

They adored settling down with me on the sofa, and listened wide eyed and intently whilst I read aloud the story on the Saturday night (as I was out on the Friday), and were just so excited to see the next day what mischief the little scamp had been up to.

Which was then of course where Mikey and I came into play!

It took us ages to decide what sort of scene to set up, and then between us as a fabulous joint effort we came up with this. 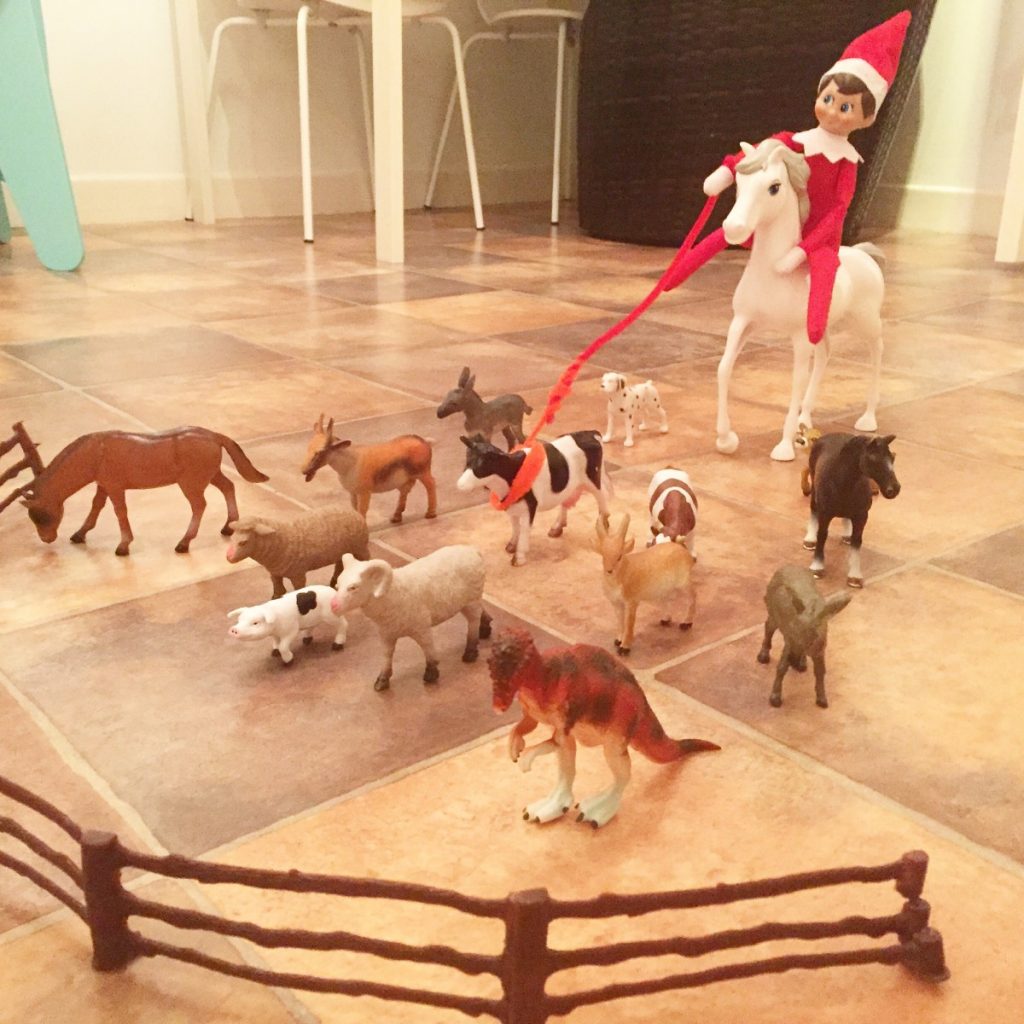 The thing is, I think we did rather well for our first attempt that the others from now might pale into insignificance somewhat. It was really good though. Mikey became pretty animated about the whole thing and it was something that as adults you can regress straight back to your childhood and really let your imaginations run away with you.

But I tell you – we’re pretty stumped now as to what to do as it would be lovely to come up with something original again, but I think it’s now all been done before!

Any ideas much appreciated!

Then, on Sunday it was time to go and find our Christmas Tree.

I love this tradition.

As I mentioned last year, we never used to have a real tree, but it’s something my husband has wanted to carry on from his childhood, and I must say, I love it.

It really does turn the whole thing into such a big occasion. Wrapping up warm and putting on our boots ready to go and find the best tree possible.

I also think its adds a little more sparkle to the whole affair too.

Especially for the kids.

My girls absolutely loved running and darting in amongst the hicaldy picaldy trees and spotting things along the way.

Every tree they came across they said

‘how about this one’

no matter how large, small, wonky or bushy.

They didn’t care – they were having so much fun and they were absolutely loving that they were a part of the decision process. I think they felt very grown up indeed!

Especially when Ella went around with her tape measure! 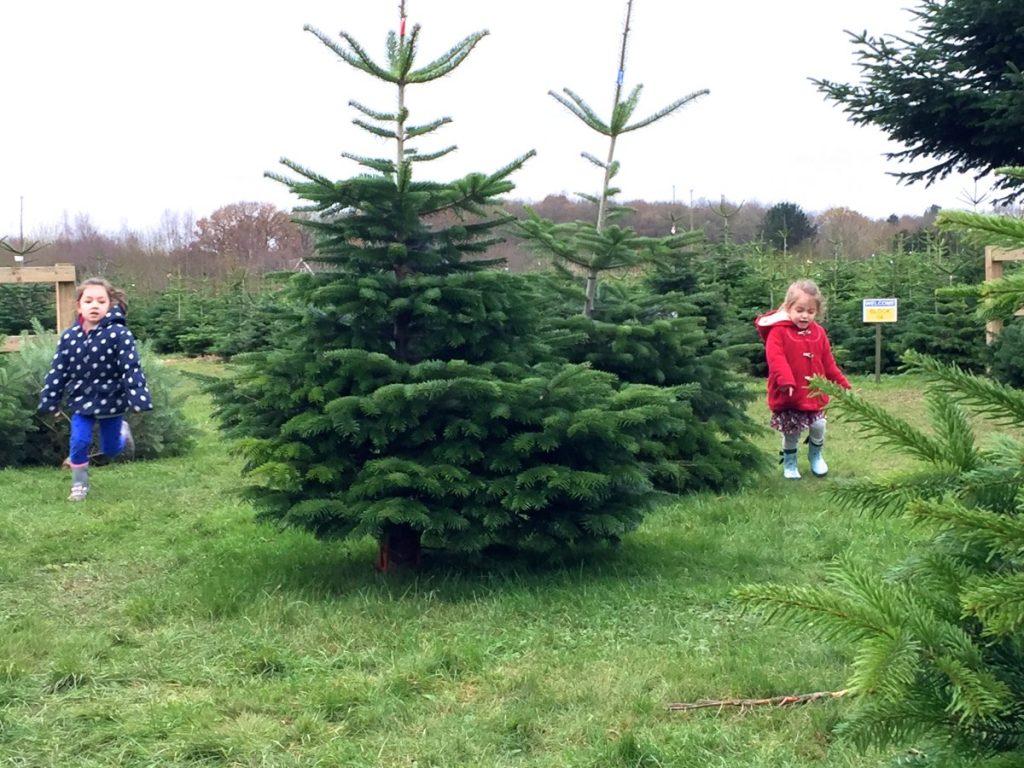 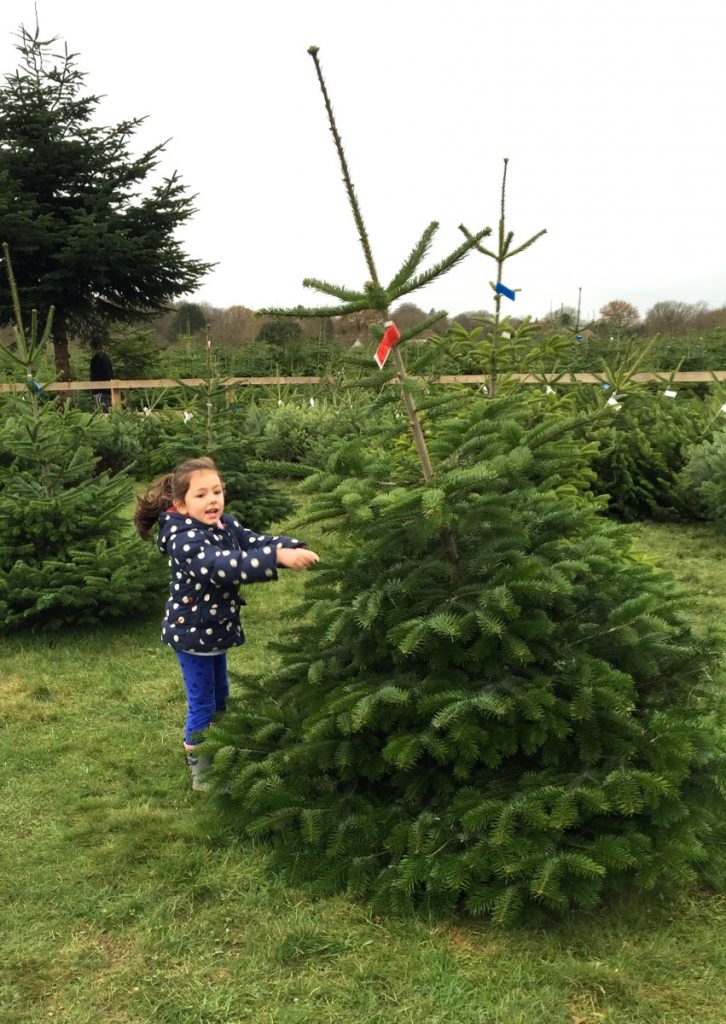 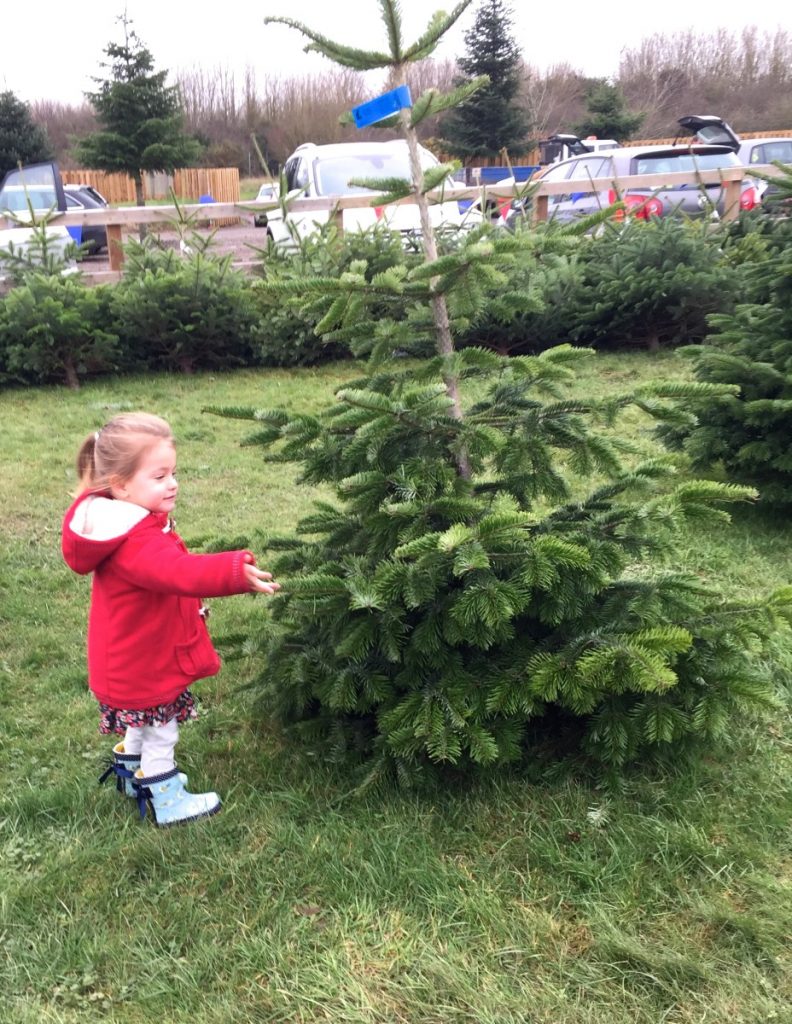 After walking for a long while in amongst the rooted firs, we ended up choosing a tree right back at the beginning about 5 feet away from the entrance. It turned out they’d only just cut down some of the best ones. 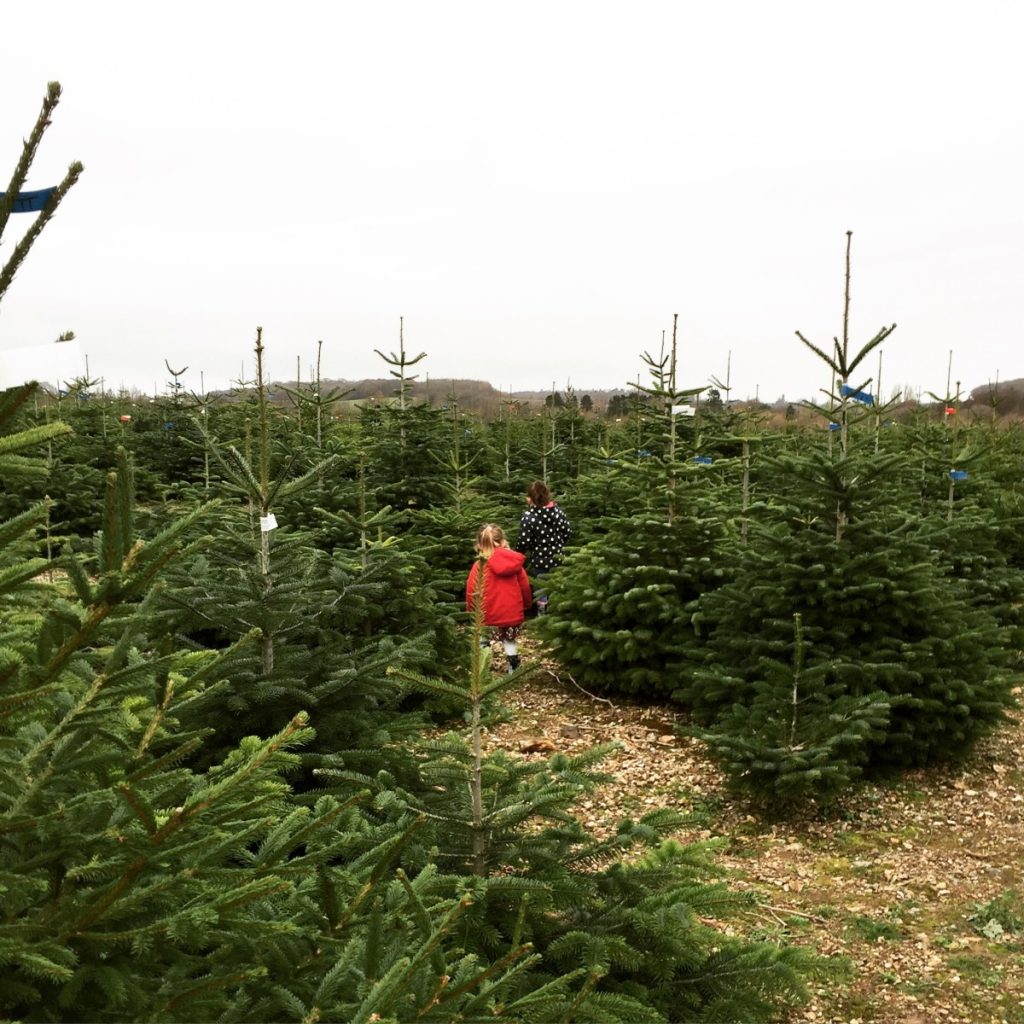 In the end, we found our perfect tree, just before the rain came too – which was marvelous and such great timing.

So the remainder of the day was decorating and spending a lovely lazy afternoon inside with the family, even with a tug of war with Ella over the string of silver balls for the tree as she wouldn’t let go.

I’m afraid the tree’s theme this year is ‘anything goes’. Absolutely love my girls, but oh my, do they like decorating! In clumps!

There is hardly a branch free from something dazzling and sparkly. 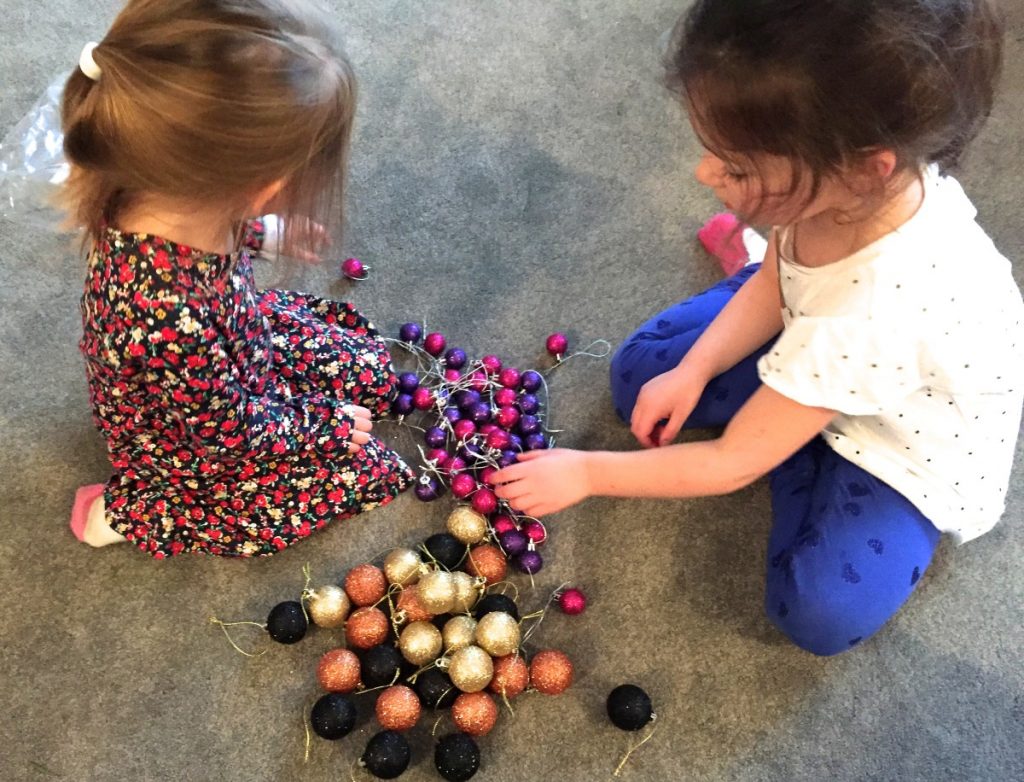 That is apart from the ones with the chocolates of course. Which mysteriously seem to be vanishing at a rate of knots!

And then, the girls were obviously do exhausted from their super fun day that they both snuggled up fast asleep together in Ella’s bottom bunk. 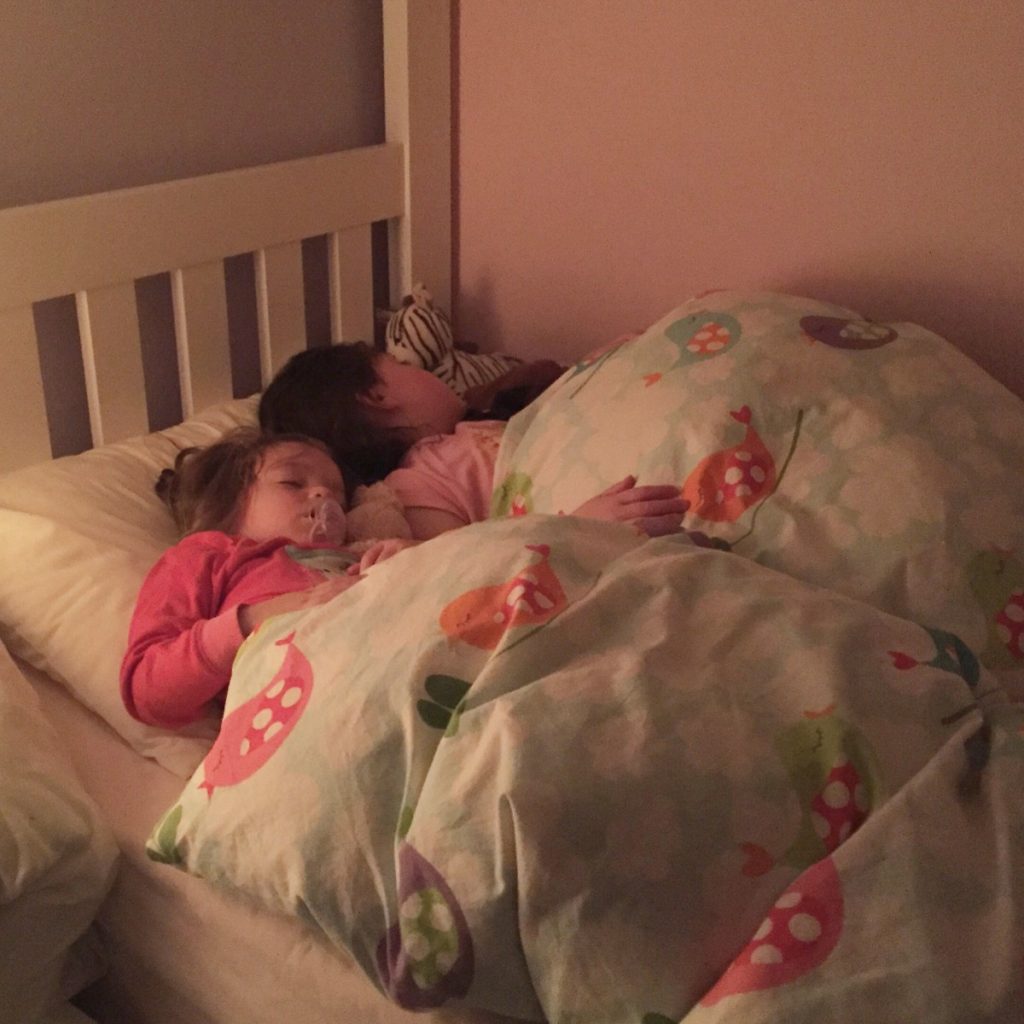 Is your tree up? Did you stick to a theme – or did you foolishly let the kids help too?