She says, with tired blurry eyes, remnants of black eyeliner slightly smeared and smudged from the shoddy and hurried application this morning, and currently searching frantically in desk drawers at work to look for matchsticks!!

Gosh – what a night!

Ok, so compared to that of having a newborn baby, it was probably not much to write home about, but for someone who’d thankfully left the night feeding behind her some time ago now, it is always a bit of a shock to the system when it’s your turn for the nightshift and all hell breaks loose!!

Basically, yesterday both of my girls were taken to the surgery by their doting Grandma (as we were hopeless yesterday morning and had to rearrange things at the last minute!!), to get their 3 year and 1 year jabs and boosters.

For H it was the second of the MMR vaccinations and a booster and with E, it was her first MMR and two others. All went ok though at first (we hear!! – feeling like a bad mummy now for not being with them!) with H behaving well for both her injections, and E was ok with the first one. Supposedly according to Grandma, once she’d had the first, she obviously knew what was coming so she practically screamed blue murder and balled her eyes out, with H, her loving big sister, then following suit and bursting out crying too as she hates to hear her sister cry!

So, when I got back to the house yesterday afternoon, good old Grandma (sorry Grandma!!), had dosed H with Calpol as advised by the nurse and was merrily flipping pancakes over the hob, whilst the two girls sat patiently waiting for their next plateful, complete with big stickers on their tops saying..

I was brave today! 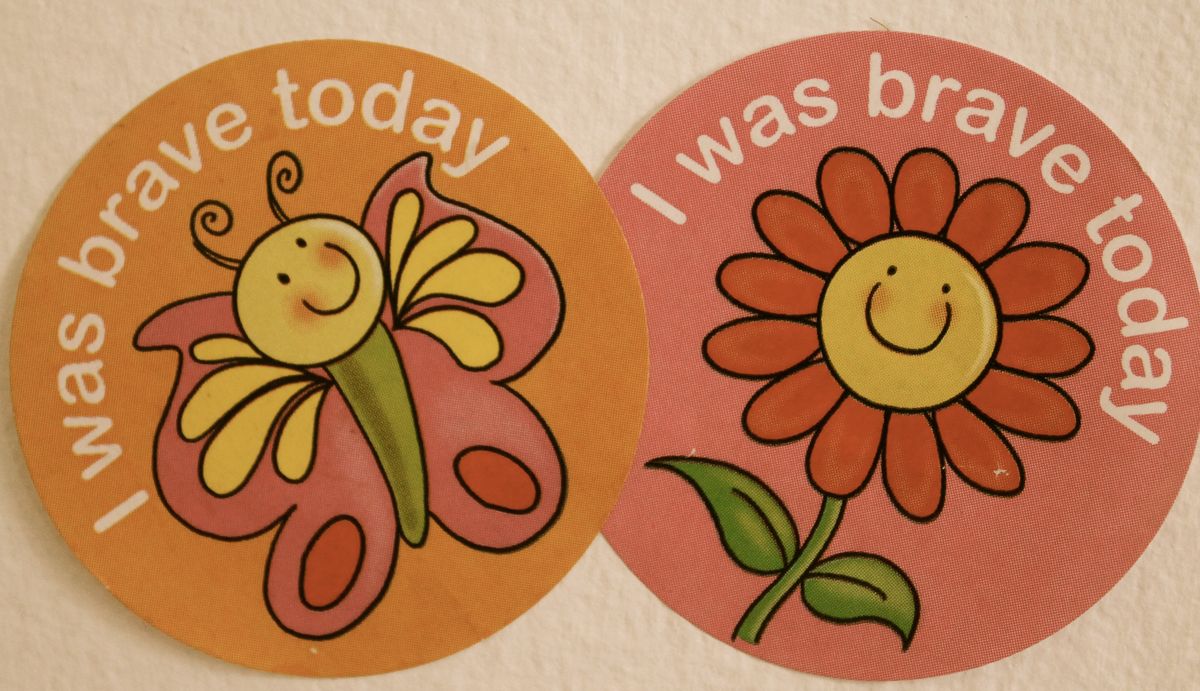 So, all in all that went ok. Although Grandma has pretty much said it’s over to us for the next lot as it was quite traumatic.

So yes, next time, Mr B and I will be more organized and definitely take them ourselves, as I feel awful about it now! I bought them each a Disney cuddly princess to make up for it I felt that bad!

I’m sure they’d rather us be with them than the princess doll!!

Goes totally against what I said in my other post eh, about giving out love and attention rather than material possessions – see here!!

Oops!!  That’s motherhood for you, one minute you’re right, the next you’re in the wrong! Even according to your own views and ideals!!!

So, the girls both happily played together with their new dolls for the rest of the afternoon/evening until it was bath and bedtime. E was put to bed first and then H followed about 45 minutes later – we used to put her to bed at 7pm but in this last week she seems far less tired and ready for bed at this time, so we’re trialing a later bedtime for her this week.

Once the kids were in bed, Mr B and I sat down for supper and to our nightly viewing of the first season of Prison Break – I cannot believe we’ve only just discovered this – we’re totally loving it!!

When all through the house, not a creature stirring,………

until I woke up to hear H sobbing from her bedroom. I quickly hurried in and could tell straight away that she was hot. So off I trotted to the bathroom to fetch the thermometer.

Not good. So I carried her through to our room, stripped her off, opened up the windows and gave her some more medicine. She was also complaining of a stomach ache so there I am on google! She was still quite inconsolable at this point so I gave in and put on some cartoons for her just to calm things down a bit. So there we were, sat watching Sheriff Callie (H’s current favourite!) at 1.30 in the morning!

After that and an episode of Jake and the Neverland Pirates(!) we told her it was time to settle down, so she swiftly dozed off, led contentedly in between the two of us as I tickled her off to sleep.

not a creature was stirring, not even a mo.……..

Back I trudged to grab the thermometer once again.

Ok, so as with H a couple of hours beforehand, I scooped her out of her cot and took her through to our bedroom, stripped her off, changed her nappy and gave her some medicine too.

Now the problem with this particular medicine, is that it works.

Ok, so it’s actually fabulous and not a problem at all!! But in the middle of the night when all you want to do is go back to sleep, you then end up with toddler and baby who seem to have each drunk a can of Red Bull and are totally hyperactive and high on life at 3.30am!!

We were practically having a little party in our bed – H in fits that Clemantine (Deputy Sheriff Peck’s Donkey!) was flying, and E laughing whenever H did!

Hooray for our new super-king bed is all I can say!!

H didn’t take that long to settle back down, but E had other ideas. And then there was the scuffle as to who was sleeping next to mummy!!

E was snuggled with me at first, but this upset H, so I did a swap with Mr B – which seemed to work for all of two minutes!

Then E shuffled back over to me, climbing over anything in her path; the duvet, pillows, Wo-Wo (H’s teddy) and H’s head!!! She literally took no prisoners!!

So there I was, led with two little hot water bottles sprawled on top of me and my bottom attractively hanging out over the side of the bed!!!

So much for the super-king!

Enough was enough, and when it looked like E was just not going to settle with us (we honestly didn’t think she would but it was worth a try, as we wanted to keep our eyes on her), I checked her temp again, which had dropped nicely, so whisked her back in to her cot. She always sleeps better in there. I suppose there’s less body heat, so she could stay cooler rather than be all hot and sticky whilst snuggled up with us.

It was touch and go this morning as to whether they were going to make nursery, but both were boisterously running around our bedroom, making a mess and causing the normal havoc they do every other morning, so with temperatures practically back to normal, in they went.

I am sat here now though at work in a bit of a daze, people are talking to me and I’m smiling, agreeing and nodding but I’m really not sure what they’re talking about!!

So, early to bed for me tonight I think – and fingers crossed the girls get a good night’s sleep too!!