When I thought about writing this up as a post earlier, it made me think a little.

There’s not much in this life that really, really bothers me. A pet hate if you like. Something that I’d much rather run away from or not do etc!

Sorting out the girls clothes!!

Sounds ok really doesn’t it?  Nothing to be very bothered about?

it just seems to take me forever, be never ending as the kids keep growing (fact of life) and at the end of all my hard work there’s really little show for it!

Once H had grown bigger, we packed all her outgrown clothes up into bags and clear storage boxes (love the £ shops for these little bad boys) and shoved them up into the loft, just in case we ever had another little girl.

And lo and behold – we did!

Though the thing is, H was born at the beginning of October and E, at the end of March, and both were totally different in birth weight/size etc so although we initially thought we’d be able to save a few pennies by recycling the clothes, nine times out of ten I’m finding they don’t fit.

And if they do fit – they’re totally the wrong season.  I think Little E would get a bit cold in the middle of winter in just a vest dress!!

And if they do fit, and are the correct season – there’s a nasty great baby sick stain right down the front which makes me wonder why I ever bothered neatly folding and packing it into a box in the first place!

So my big clear boxes are sat out in front of me, all empty and itching to be filled with new stuff thats just going to sit up in the dark, cavernous loft and collect dust>

Then there’s the full boxes which mr b has kindly (been directed to) fetch out of the loft me, and then the piles of clothes which I literally just bundled into a great heap the other day which all are in desperate need of being sorted out.

Just how we’ve amounted so much stuff is beyond me!! 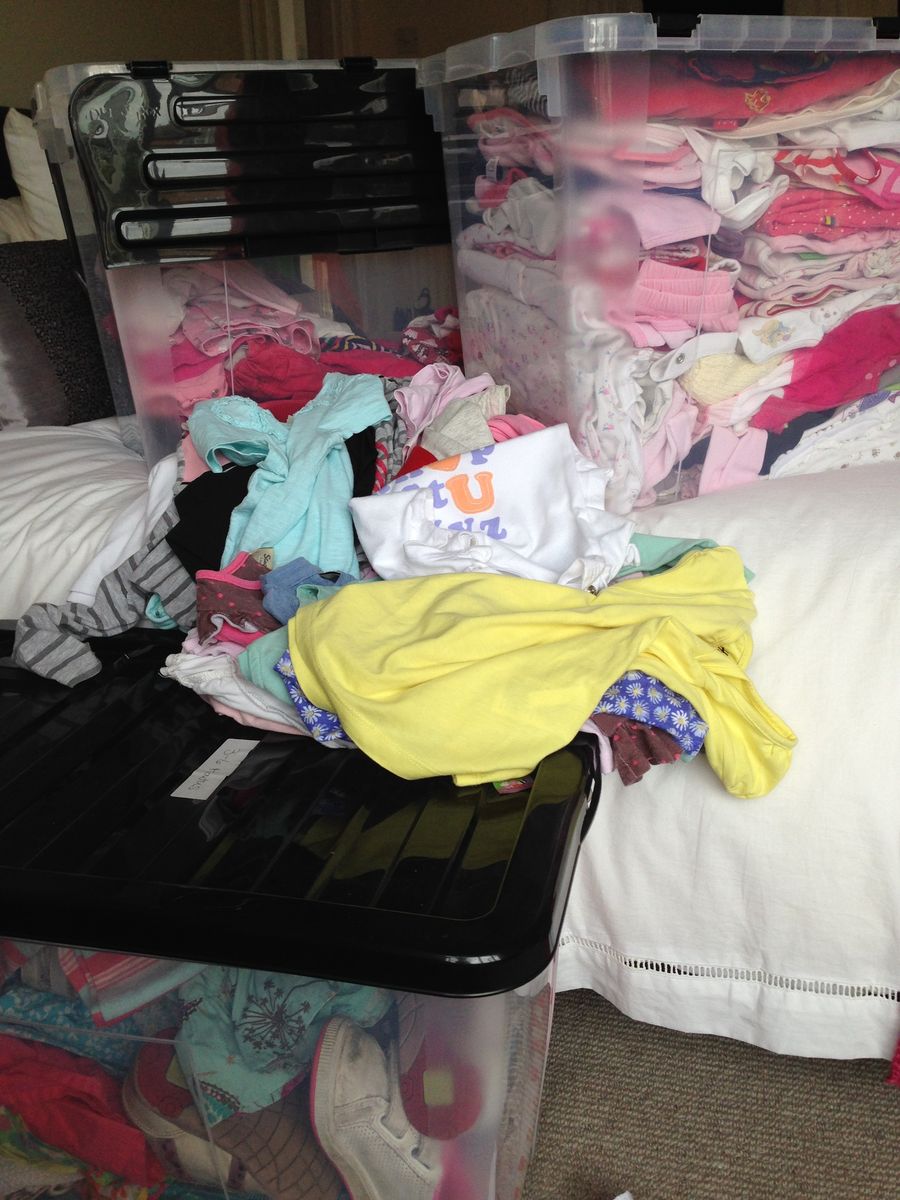 The other thing which bugs me is that Mr B seems to be psychic; as he always manages to make himself scarce or busy himself with chores in another room – invariably the garage or the garden where he says he can’t hear me shouting for help!!

So what are my main bugbears then…

Having to coax the girls into trying on the clothes!

I find both girls problematic in their own unique ways!!

If I try to get Little E to try anything on – the first mission is catching her!

We are finding her quite an independent character nowadays, and so completely different to when H was her age.  So as soon as you manage to grab her out from behind the bed, or some corner that she’s wedged herself into, she starts to cry blue murder and have a tantrum as if I’ve just ruined her day!  Well, I suppose if I put it like that, perhaps I have if all she wants is to just run around and do her own thing!

In the end it’s more a case of trying quicky to chuck a top up against her upper torso as she goes running past – and having to make a decision in that split second before she’s disappeared again!

And H – well, she never needs an excuse to get naked.

I don’t think I’d even finished my sentence before she’d whipped off her clothes and thrown them all over the floor!

It’s the ‘trying to get her to put clothes back on‘ thing which she struggles with! It’s all a big game to her. She gets the giggles, goes all floppy so I can’t physically put the clothes on her, runs around like a lunatic with half the t-shirt on her head like a hat and has to inspect herself in the mirror each time only to get a further bout of the giggles! It’s either this or she just hides or ignores me!!!

(not mine physically, mind!!)

So once I’ve managed to get a pretty good idea of what might be worth keeping, it’s time to sort it into piles so I can get some sort of indication of what I now have versus what I still need to buy.

the Little E pile for now;

the Little E pile for a few months down the line;

the H pile from last summer which we think will still fit her;

the winter pile for both of them;

the current piles for them both of them;

and finally the bin pile!!

Which spells disaster if you have two little sets of hands who want to get involved too!

I can see their little eyes bulging too at the excitement of something new to ruin!!!!  It’s almost like a tag team too! If I turn to stop one from trashing one pile, you can rest assured another behind me is now scattered back across the floor!

So, E’s pulling out the clothes from one storage box and running off to other bedrooms with them. It looks like there’s been an explosion in a clothes shop!

As per the story of Hansel and Gretal and their trail of breadcrumbs, I follow the littered t-shirts, leggings, single socks or shoes and a belt or two along the landing and through my bedroom to the wardrobe to discover her haul!!

Then they pretend the piles are pillows and either lay their own heads down and pretend to go to sleep, or they get their dollies to play ‘putting them to bed’ or they just used them as platforms to jump between!

All in all, my piles didn’t turn out very neat

Well, I say helpful, but I mean quite the opposite!!

They think they’re being helpful, and probably trying really hard to help me, but it just doesn’t happen. You can see the concentration on their faces as they watch me folding up the clothes and put them into the correct pile.

Then they attempt it too.  It takes about ten minutes for them to even flatten out one item before trying to fold it! And then they get all flustered and grumpy when they find out they can’t, so throw it somewhere else and attack my nice neatly folded stack of clothes to find a new item to scrumple up!

I did smile though, as it was actually quite cute really as both Little E and H, had to sit down alongside me – both copying me and watching intently at what I was doing, with Little E even copying exactly how I was sitting.  She kept looking at me and reversing her little bottom backwards along the carpet just so she was lined up with my bottom, and only then thought it time to start on the clothes!!

it was at this moment that I started to giggle myself.

i was about to have a right meltdown moment, but instead just sat back and watched them as they tried to be me!!

I smiled to myself at how utterly adorable they both are.

and yes, they completely drive me nuts, but I love them all the same!! 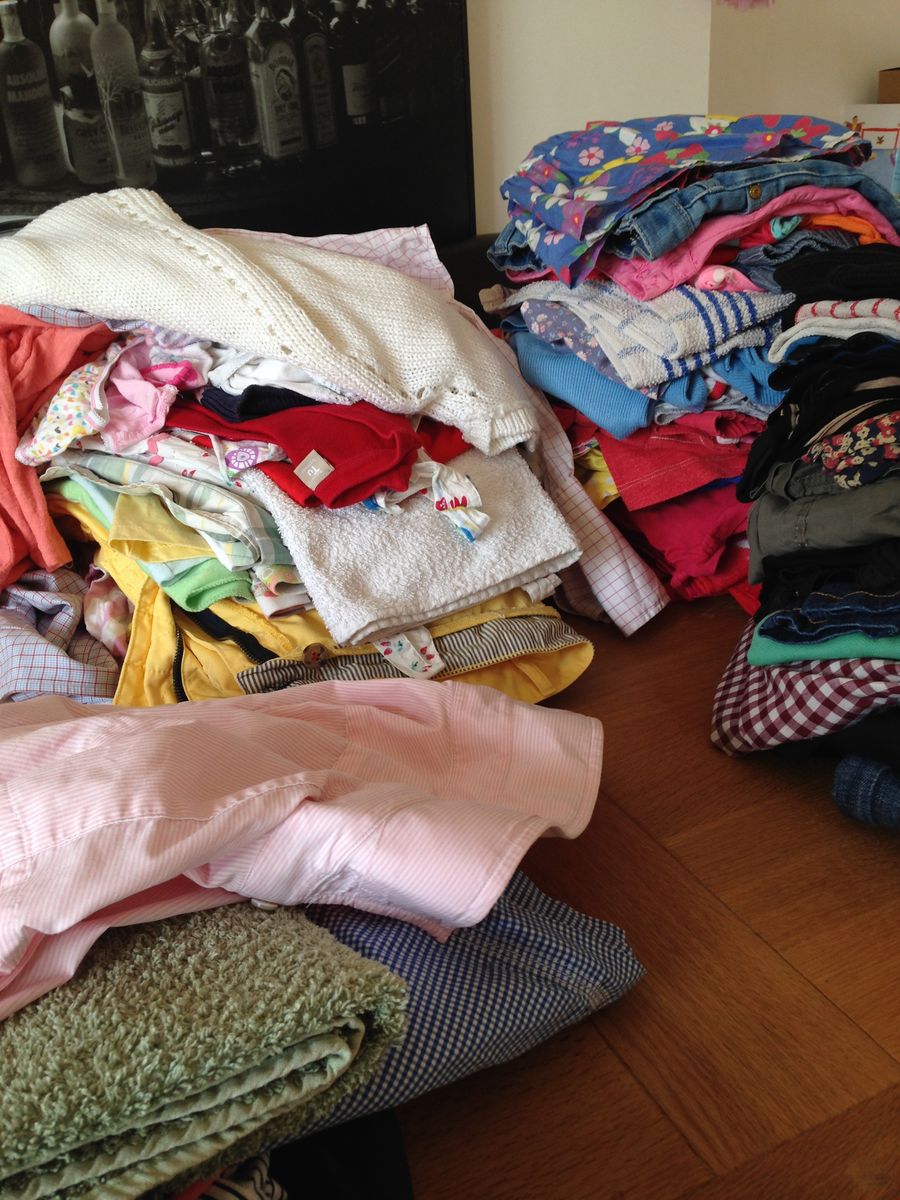 So,… that was the sorting.

And although I’m happy that I’ve found a good stash of clothes which should be ok for Little E, we now have the endless job of washing, ironing and putting them all away!

Looks like I have a fun filled weekend ahead for me!!

Do you have a ridiculous ‘pet hate’ or do you share the same as me above?