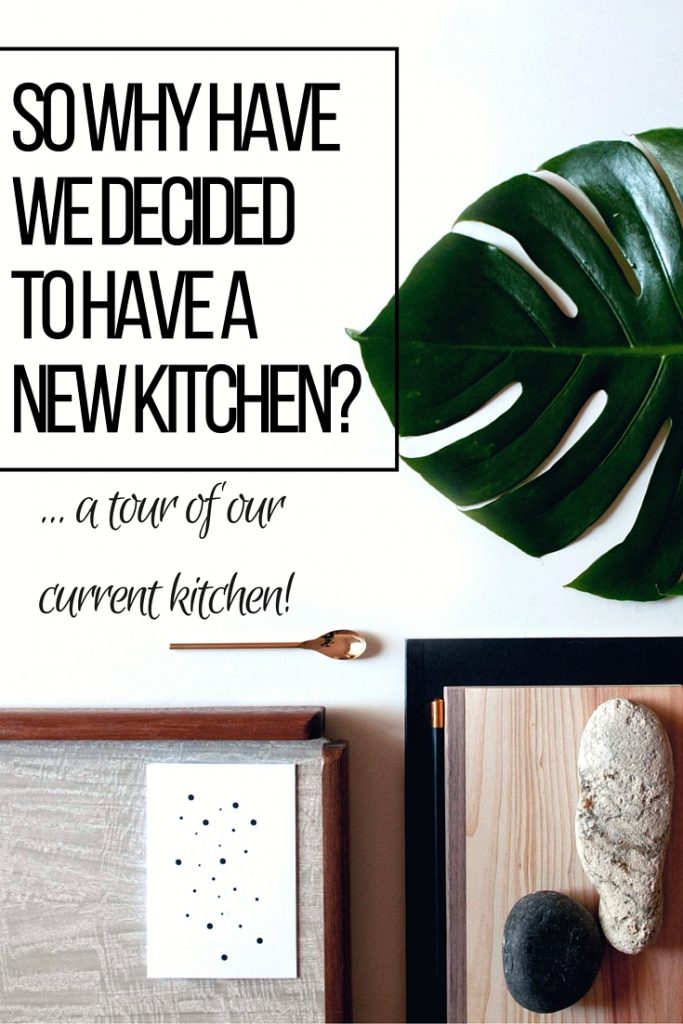 Anyway, as I let you know in my last post, we finally booked our lovely new kitchen and are now just counting down the day until the work (and general mess and mayhem I’m told) begins.

And the days are going by pretty darned quickly!

The work is due to start at the end of July, which is only one month away now, and which to be honest is both amazingly exciting and scary all rolled up into one!

I’m so excited at the promise of a new kitchen, I can’t actually tell you. It’s been a dream of mine for such a long time. But as I’ve probably also said, I’m not that great at making decisions and I’m sure you’d agree this is a pretty big one!

I mean, it’s not an item of clothing I can buy, take home and try on, before changing my mind as I don’t really love it as much as I thought I did. This decision is huge, and it’s all off plan I suppose. I don’t really know how everything I’ve chosen is really going to look once it’s all been fitted in, all I can do is hope I’ve made the right decisions along the way, as if we don’t like the end result, that’s a pretty expensive non-returnable item don’t you think! Arrrgghhhh!

Anyhow, I do actually believe we’ve come up with a scheme and design which will work well for us as a busy little family.  And I am just so excited that it’s finally just around the corner rather than a pipe-dream.

But, before we box up all our crockery, pots, pans and food items from the cupboards, before we rip out all the cupboards and take up the flooring, and before the walls get knocked down, I thought I’d let you see why we decided we needed a new kitchen.

So here is a little walk through of our current kitchen, in all it’s disgusting glory!

On the outside it doesn’t look that bad, but the thing is, it’s just not my taste, and it’s only when you actually open up the doors, that you find the cupboards don’t even have backs on them!

I sincerely apologise if I hurt anyones eyes with the following pictures. There is clutter and mess everywhere, but I thought you ought to see the ‘real’ before look of our little house rather than a staged one.

*hangs head in shame and shuts eyes as I press publish* 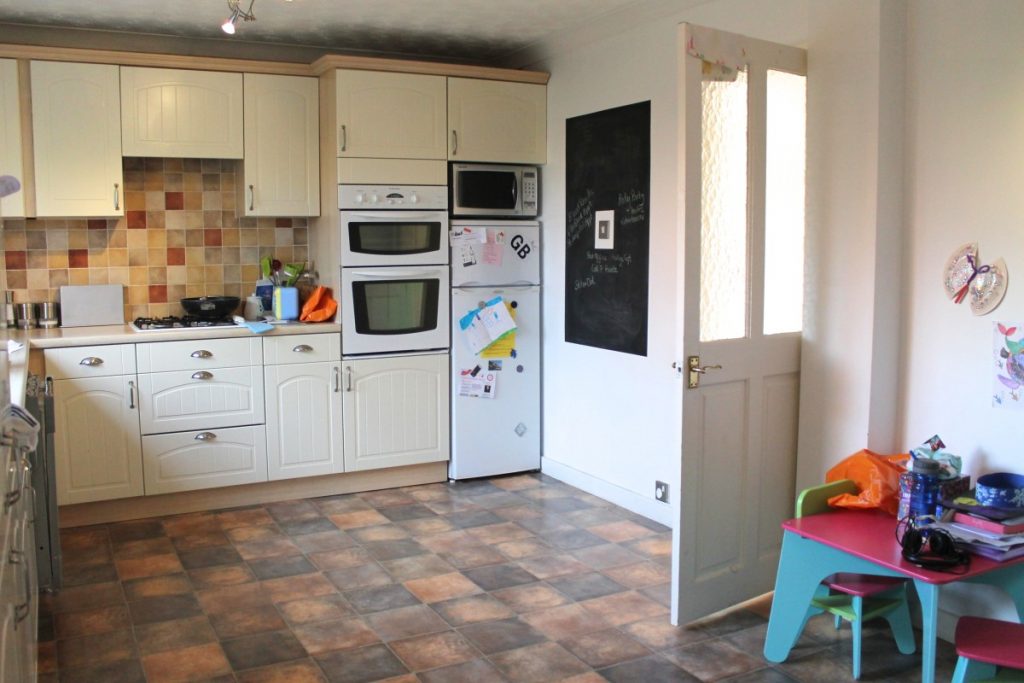 The kitchen – although it might be to other peoples tastes, unfortunately is not mine. One of the walls we plan to knock down is this one – the one with all the kitchen essentials on like the cooker, the hob and fridge.  The current doorway will be bricked up, and a new under stairs cupboard will be built into the other side for even more storage.  Most likely one we’ll need to use for toys, as the girls will be losing their play room! 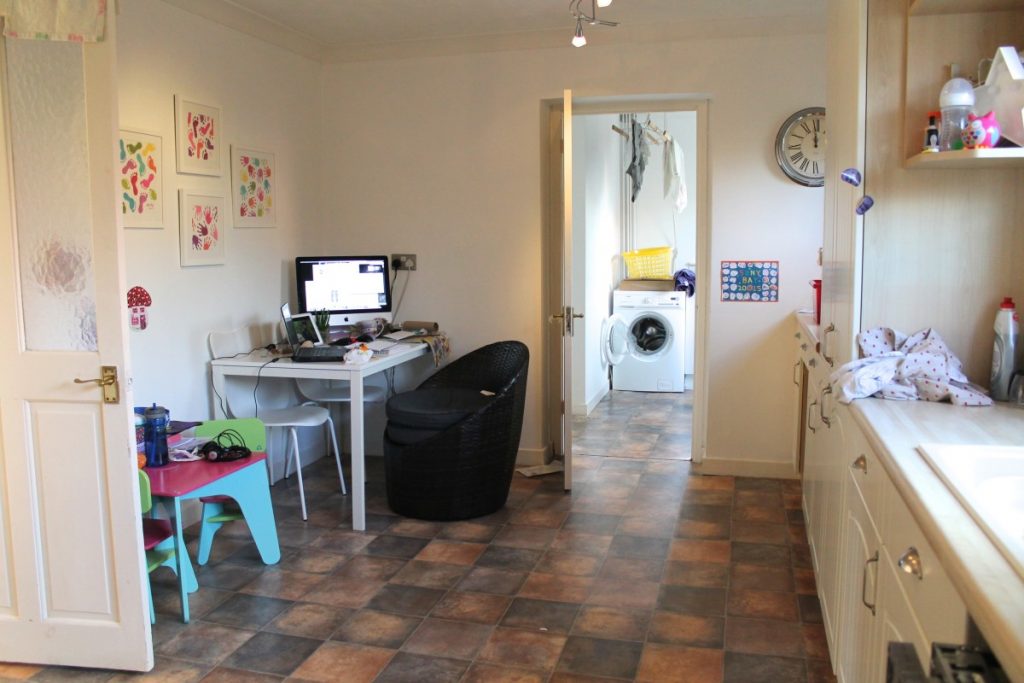 This is the view to the other side of the kitchen which leads though to the utility area and the little downstairs loo. Note the garden furniture used as an office chair!!  This has now since changed as I have my new office upstairs which I keep forgetting to post about!

The door here will be moved to the right, so as to have a larger space which we hope will fit in a small corner sofa, to make a little sitting area. 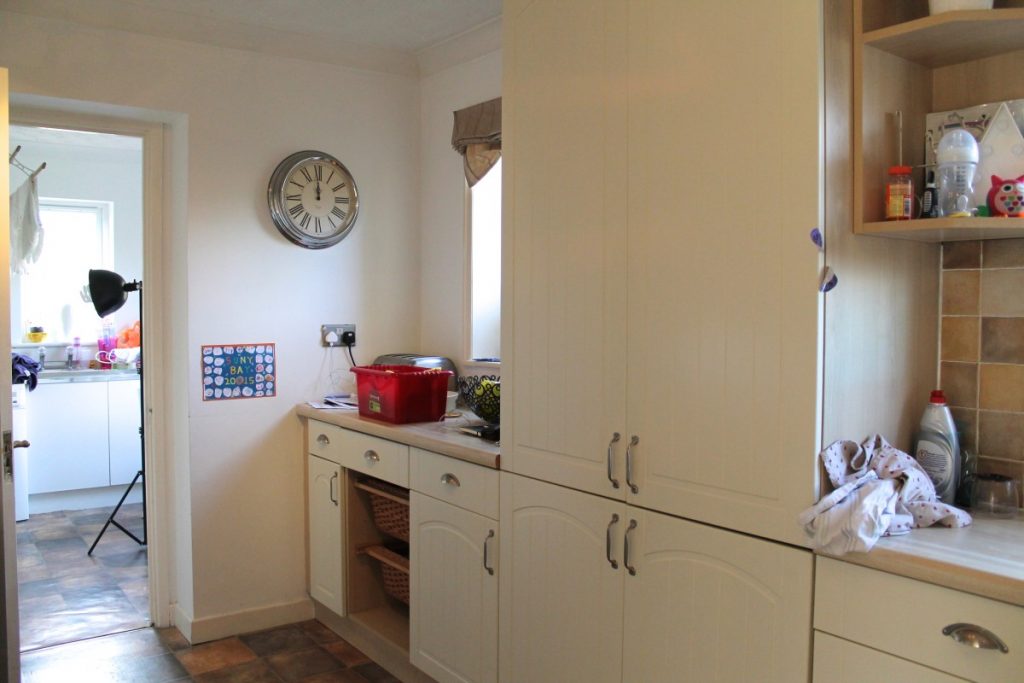 This is the ugly middle cupboard which currently houses the very old boiler. We cannot wait to move this as it takes up so much light.  The boiler will be housed in the utility room instead, over the current washing machine.

And hopefully, although we’re still in talks about this, this space will be either a second bifold door, or a large window – it will depend on the pipework and whether it can be re-routed etc, which might just be too costly for us. 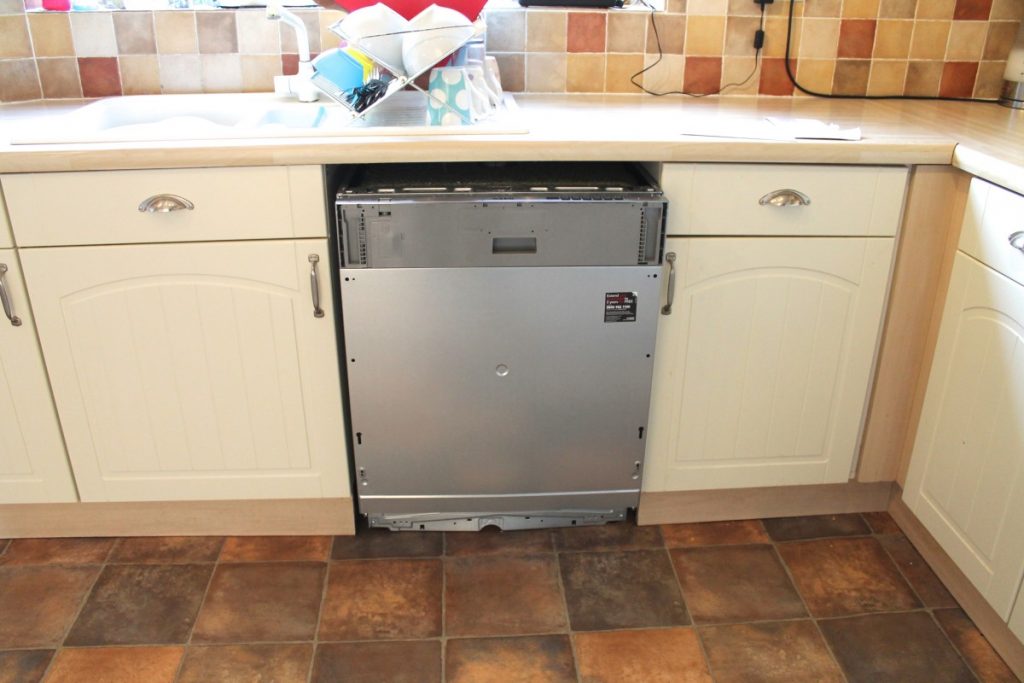 Our dishwasher broke down on us a few months back, so we thought we’d be uber sensible and bought an integrated one ready for the sparkly new kitchen.  Little did we know that it required the weight of the cupboard door to be able to open properly. Our planned efficiency has kind of backfired on us, so i really cannot wait to have this back to full working order again. 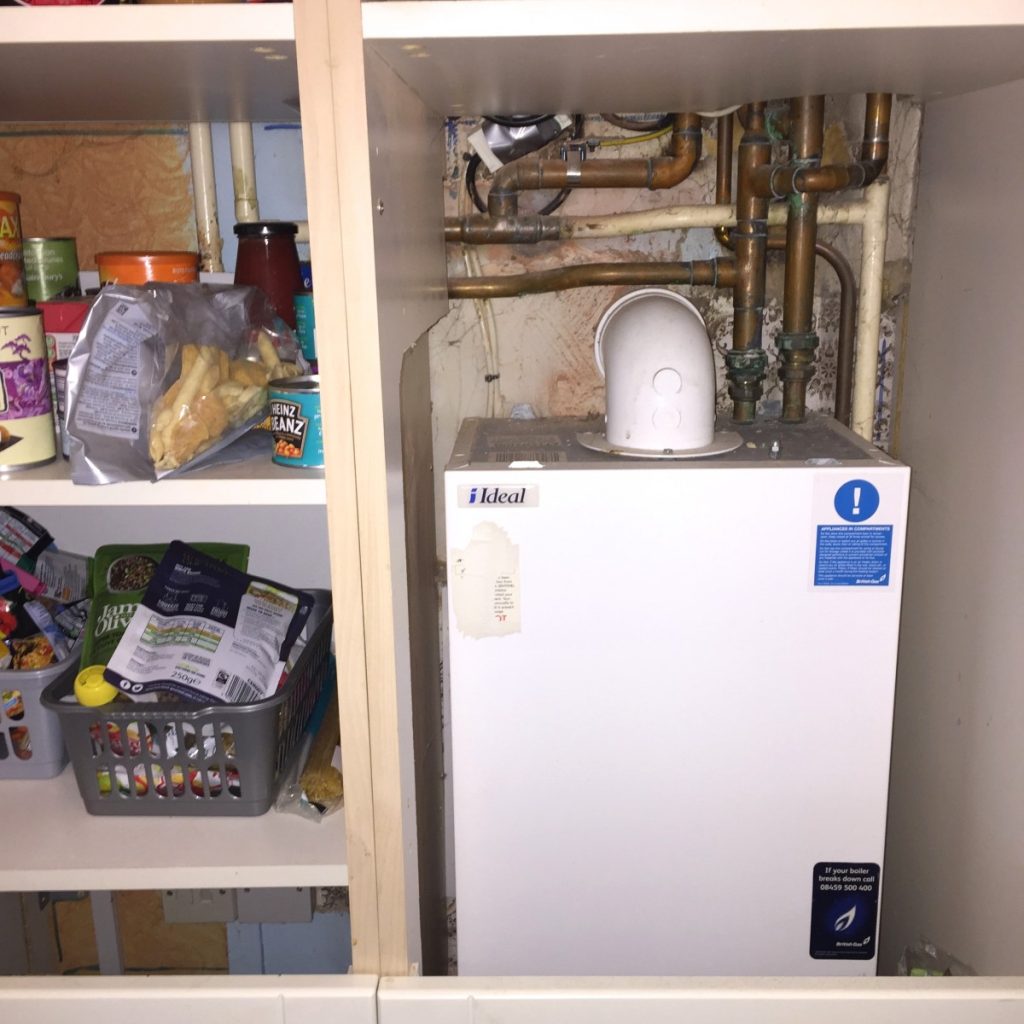 The old boiler with the lovely pipework on view behind it!  And some very retro tiles! 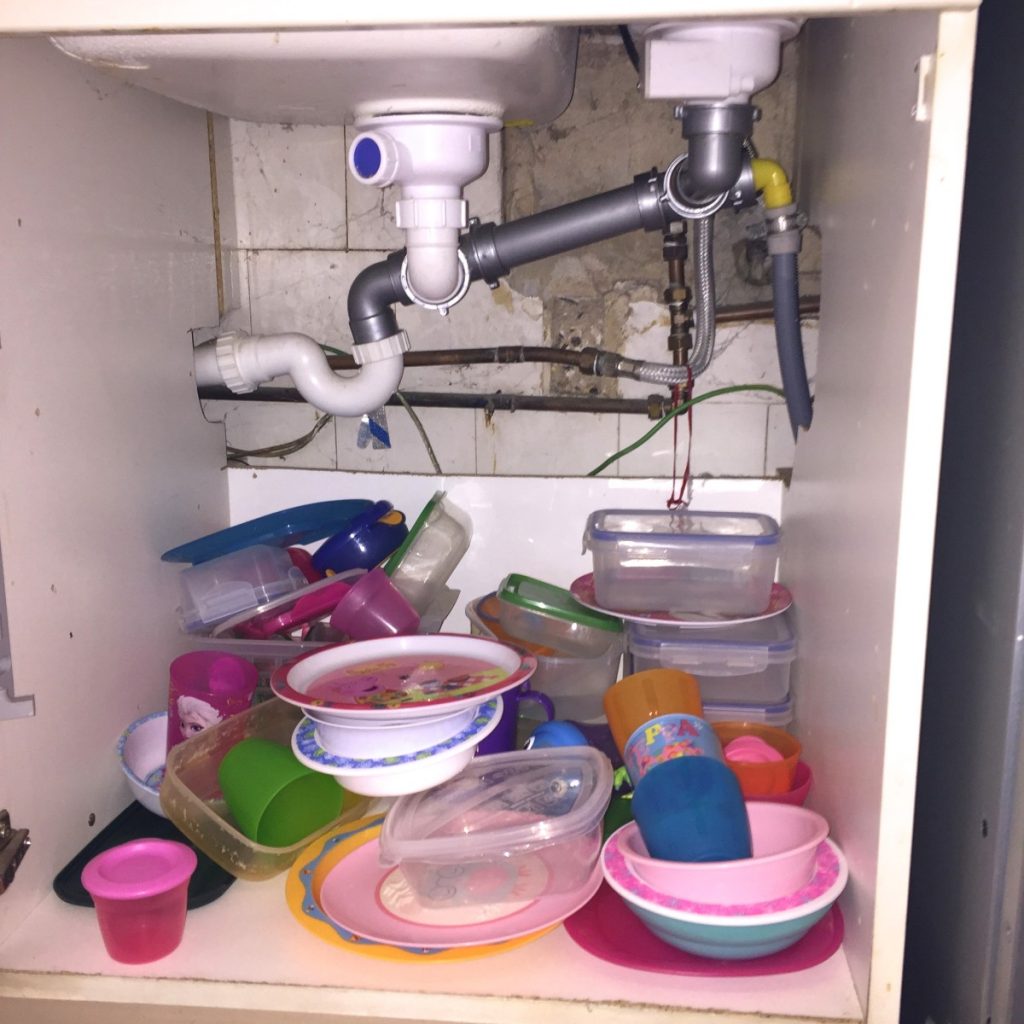 Yay! The backless cupboards. I shudder every time I venture in to get a bowl! And I have to wash them out before I use them each time too!  Just to get rid of the dust and dirt! Lovely! 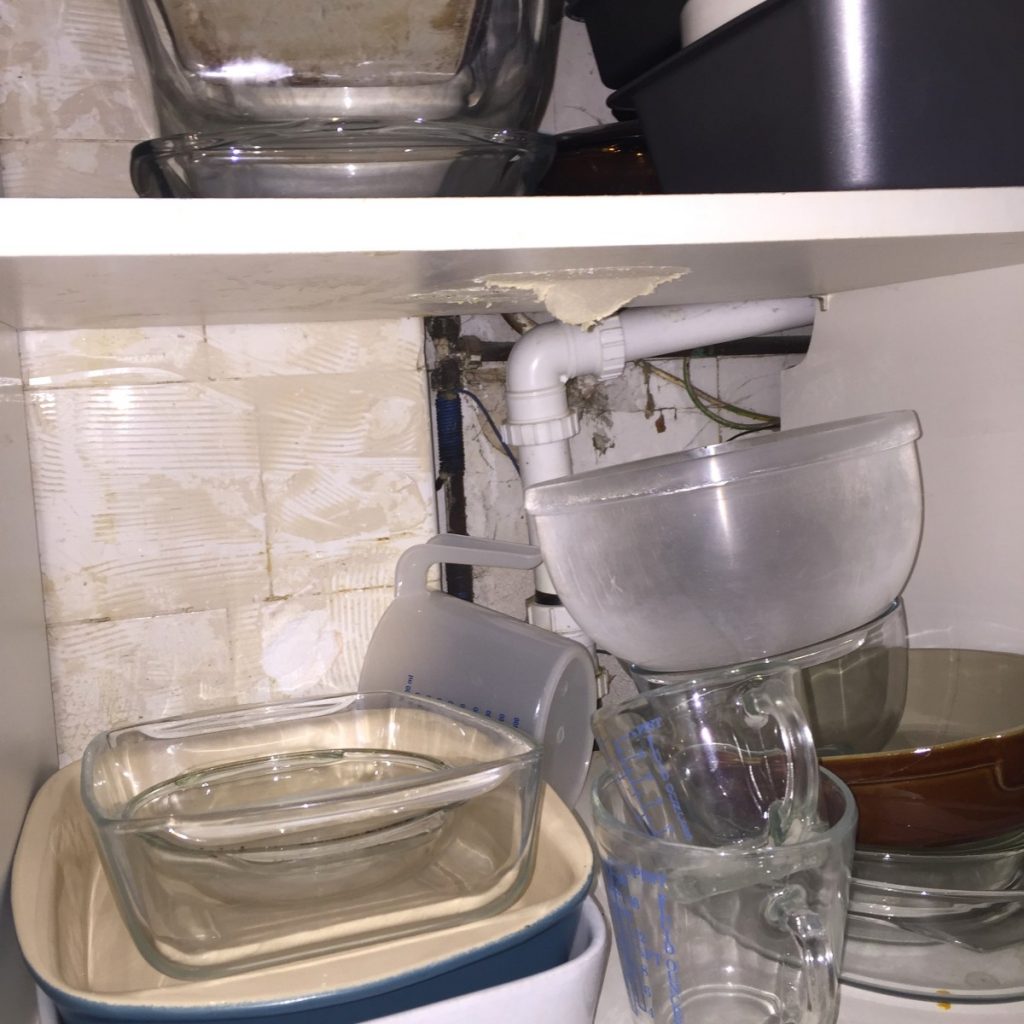 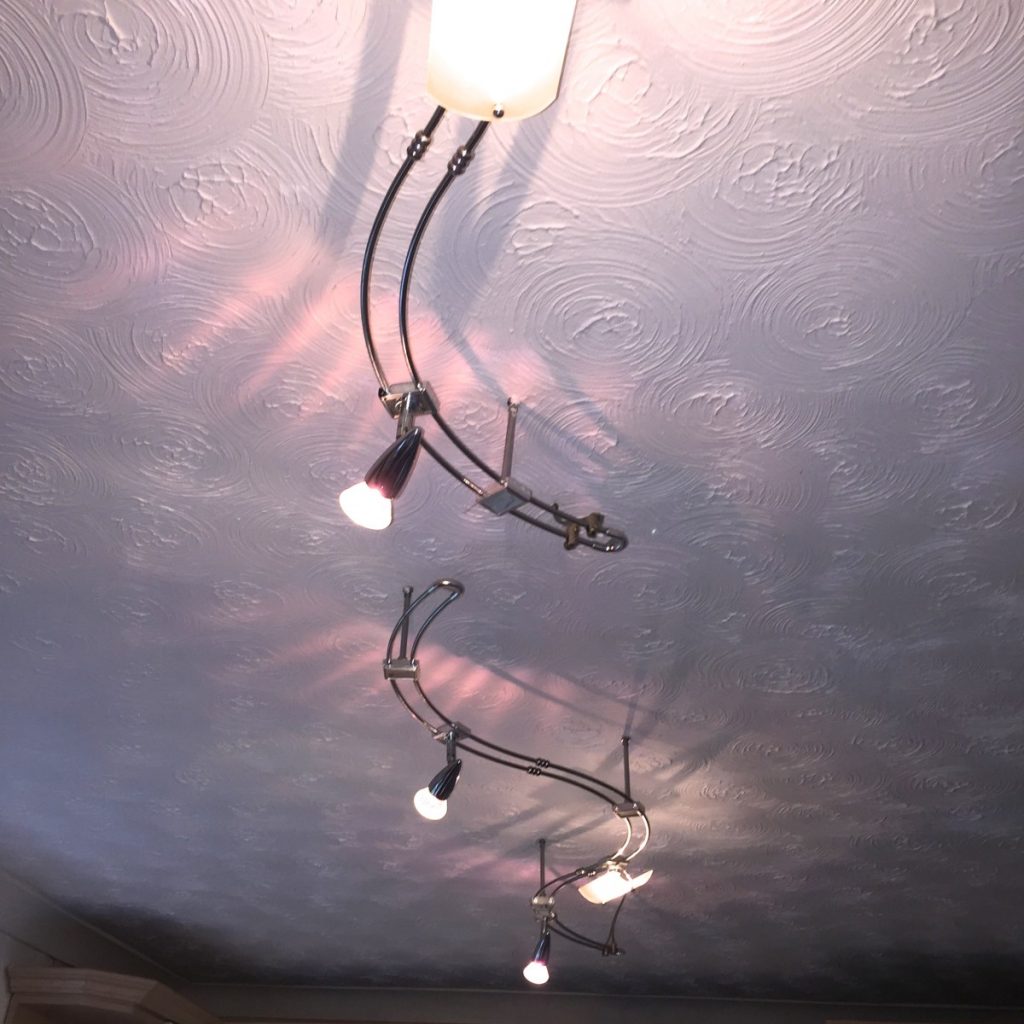 The current light is pretty awful too, and the actual light it emits is atrocious and really doesn’t serve the purpose of lighting an area, but the thing has always been a bit of a nuisance to change bulbs and has had a few faults along the way too.

No wonder I need glasses now! 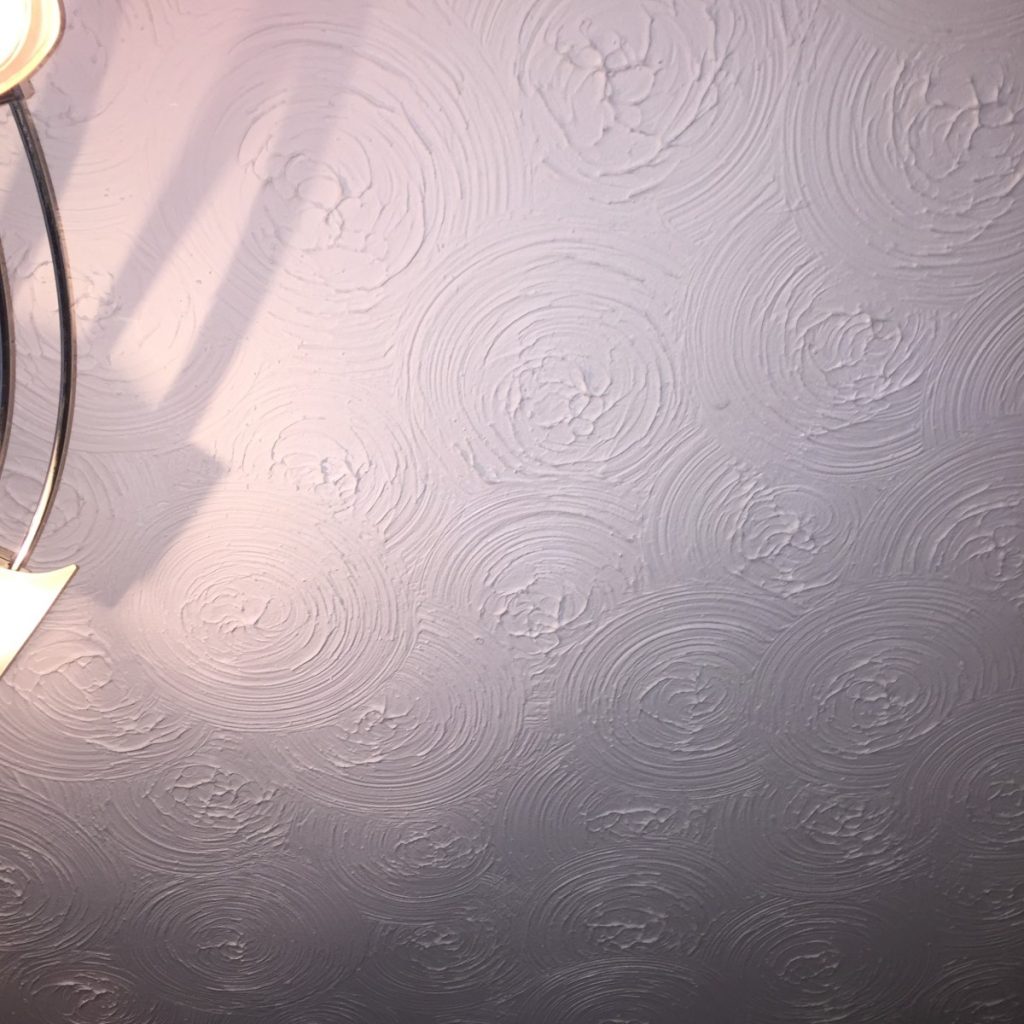 The artex ceiling is going to be re-skimmed – hooray! 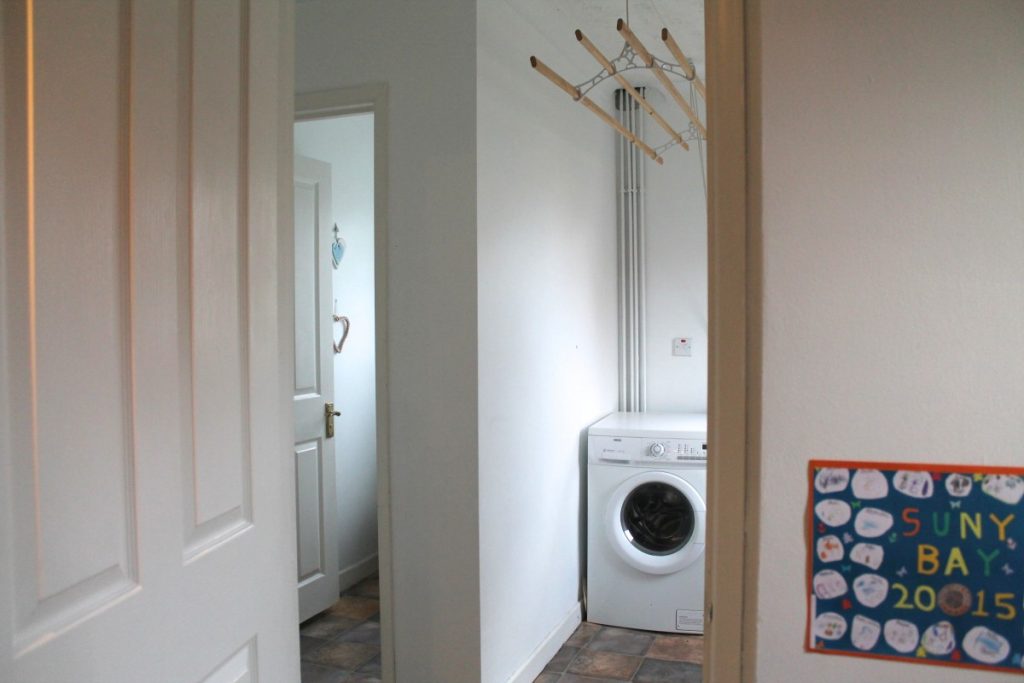 The current entrance to the utility – this is where the door will be moved. 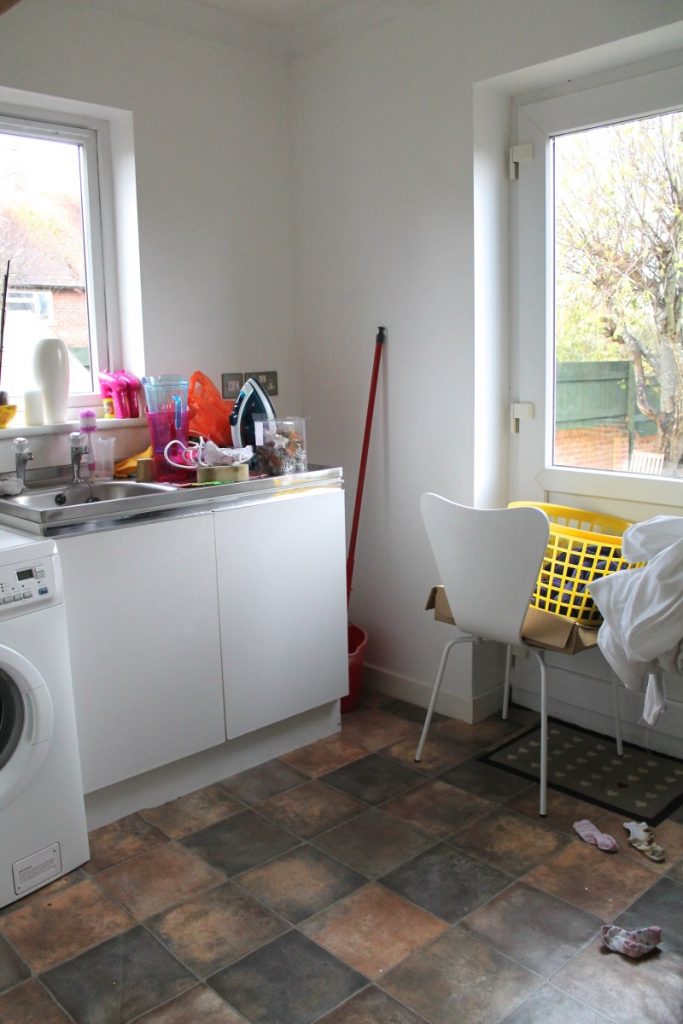 The utility – and all the usual mess as we use it a bit of a dumping ground. Especially in the winter months where we don’t use the back door as much.  This area will be neatened up, and I’m so excited to say I’ve finally been allowed to have a tumble dryer too. I can’t wait! 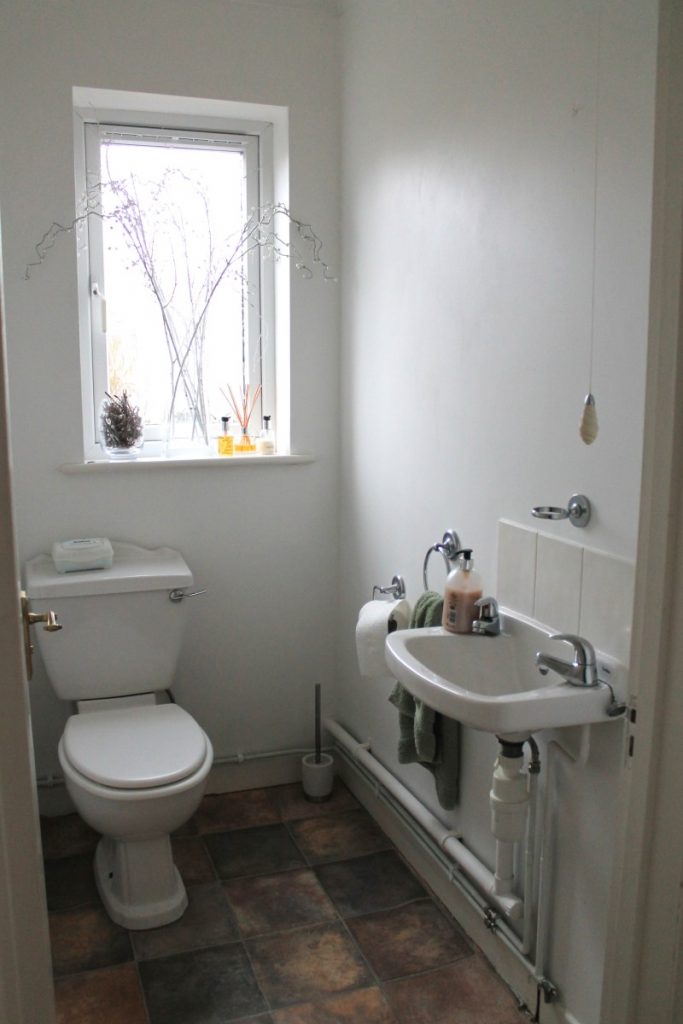 The little downstairs loo – I’m on the lookout for teeny tiny fitted units to make this a much better and more functional area.  But at least it will look slightly better with the new flooring which will go through the entire downstairs of the house, bar the living room.  That should tie things in pretty well I hope. 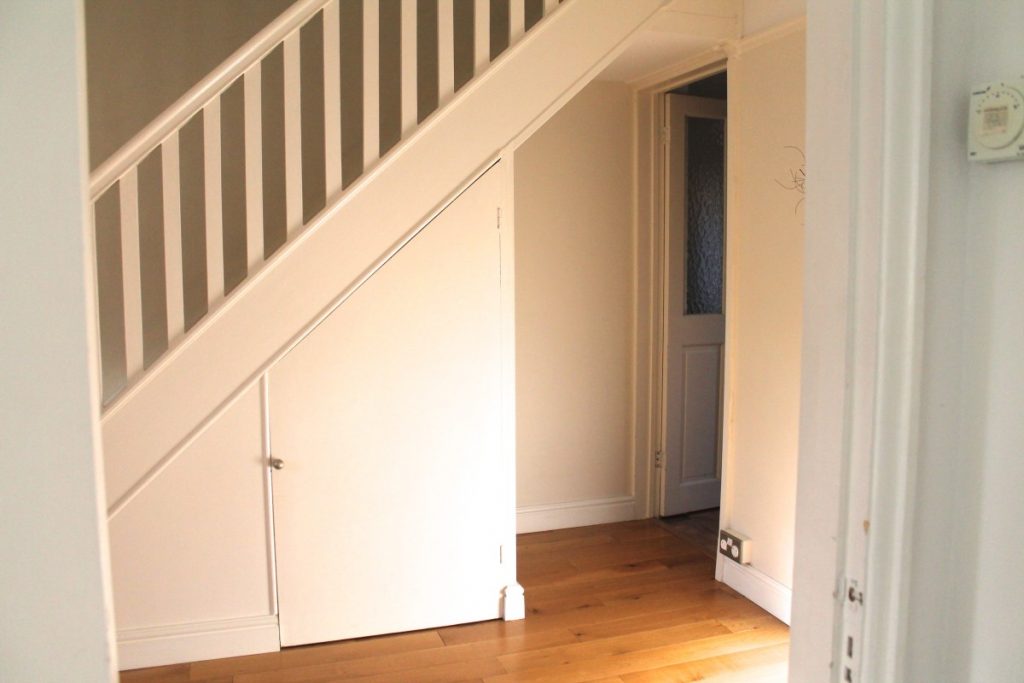 This is the hallway – the space to the right will become more cupboard space as the current kitchen door will be bricked up as explained earlier. 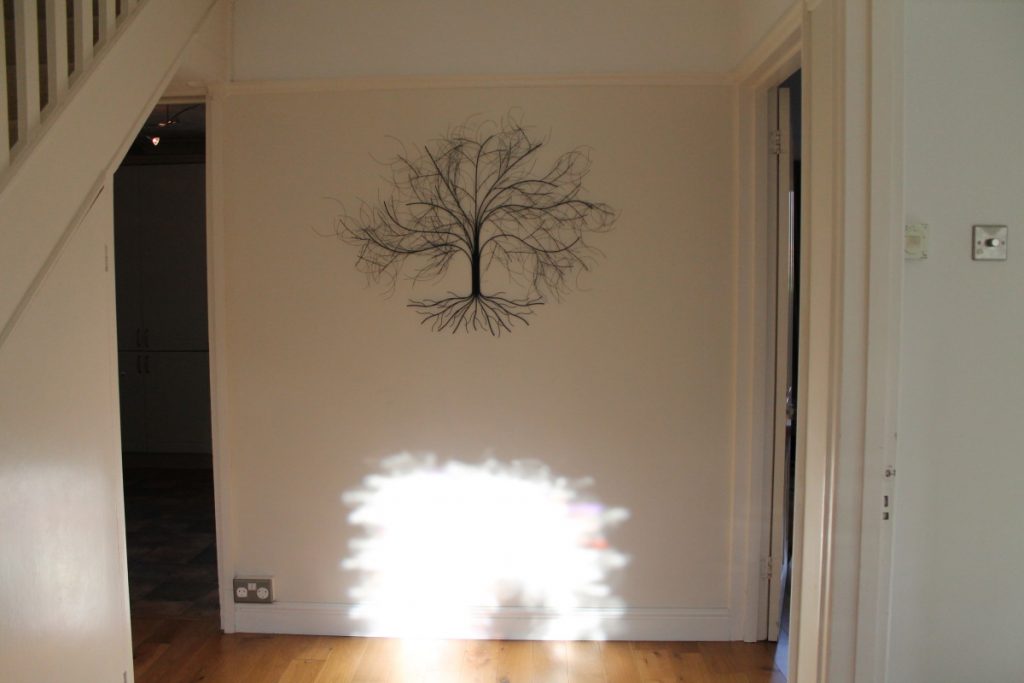 This is the hallway wall which will be part-going. Unfortunately it’s a load bearing wall so only some of it will be opened up. 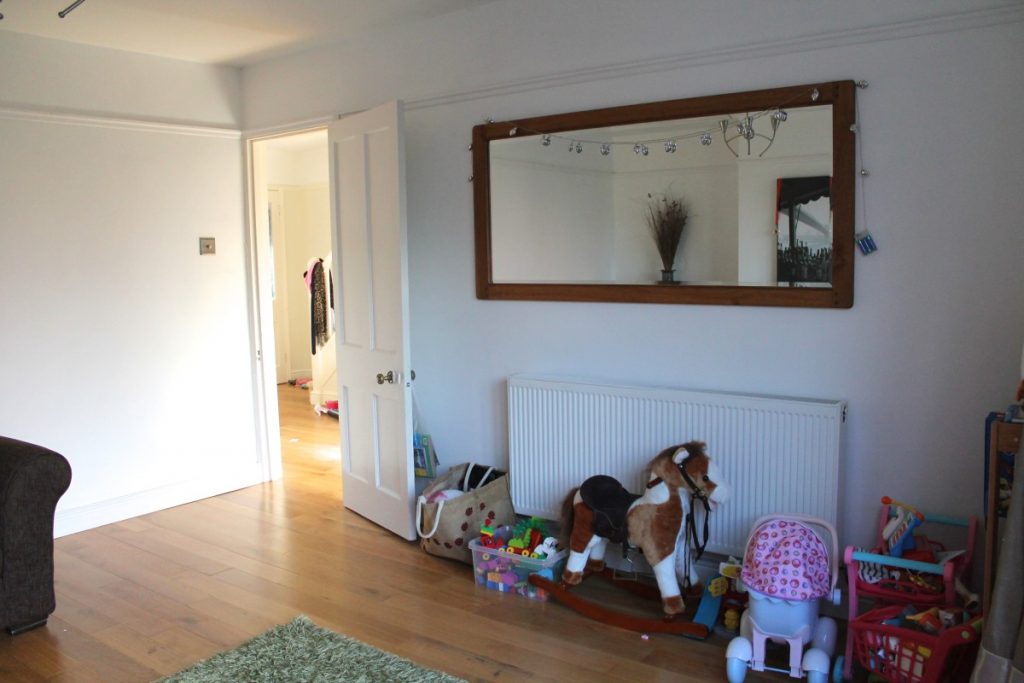 This is the dining room – and this is the wall which will be going altogether. 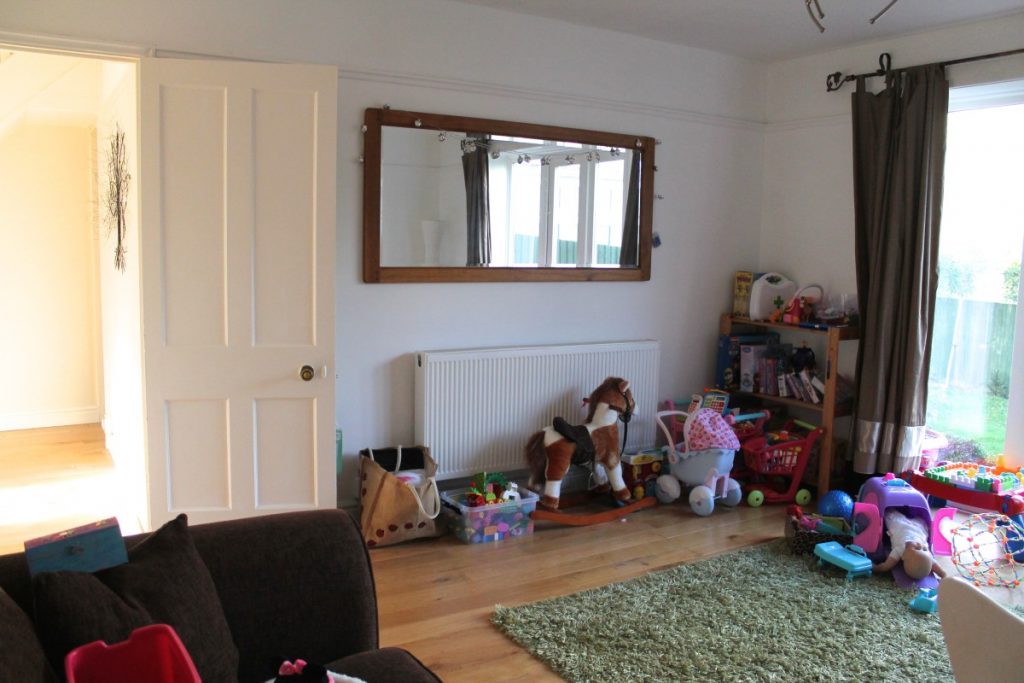 Another view of the dining area – which we currently use as a play room for the girls.  I’m dreading finding an area to house all the toys! 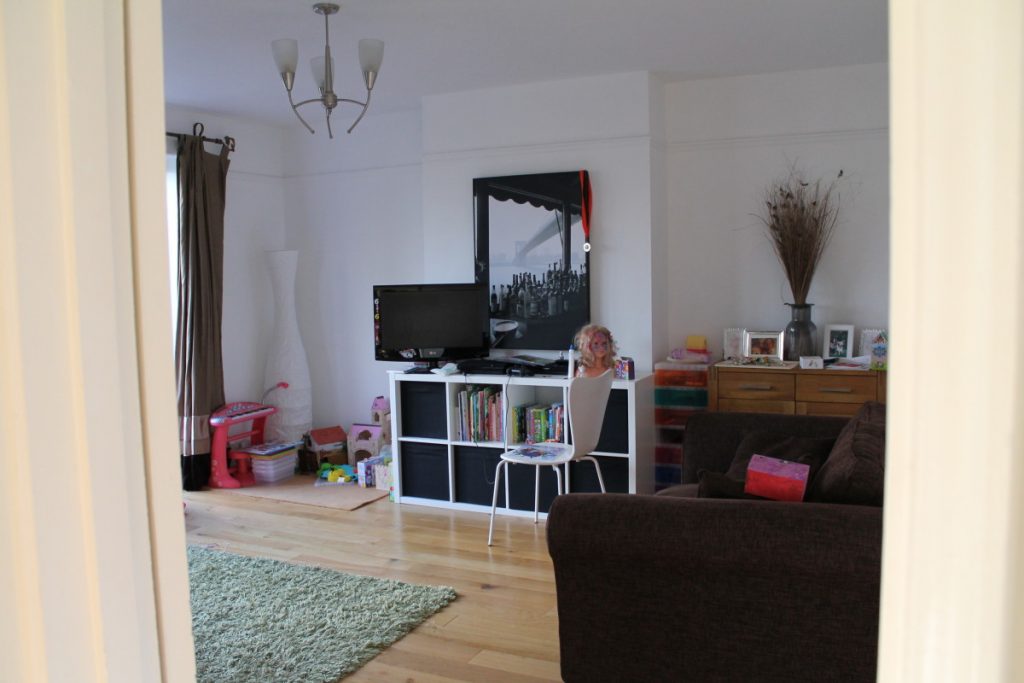 And more of the dining room. This is where we intend to have the kitchen installed. There will be an island unit pretty much where the green rug is, which we hope will become a fantastic entertaining space. 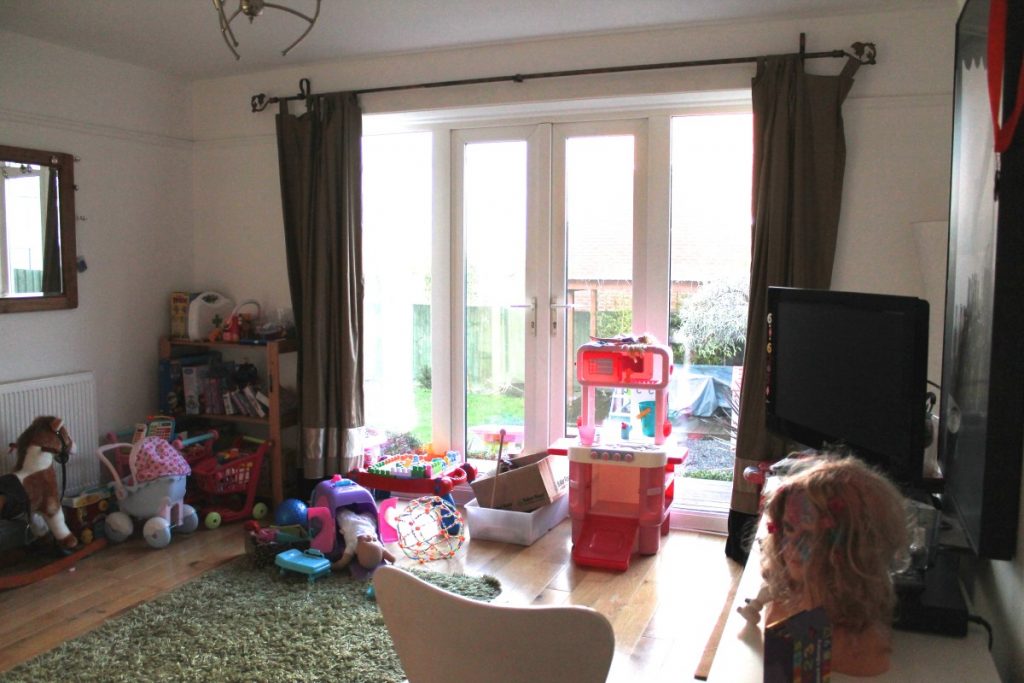 These are the current doors out to the back garden. Our plan is to have these replaced by bi-fold doors. 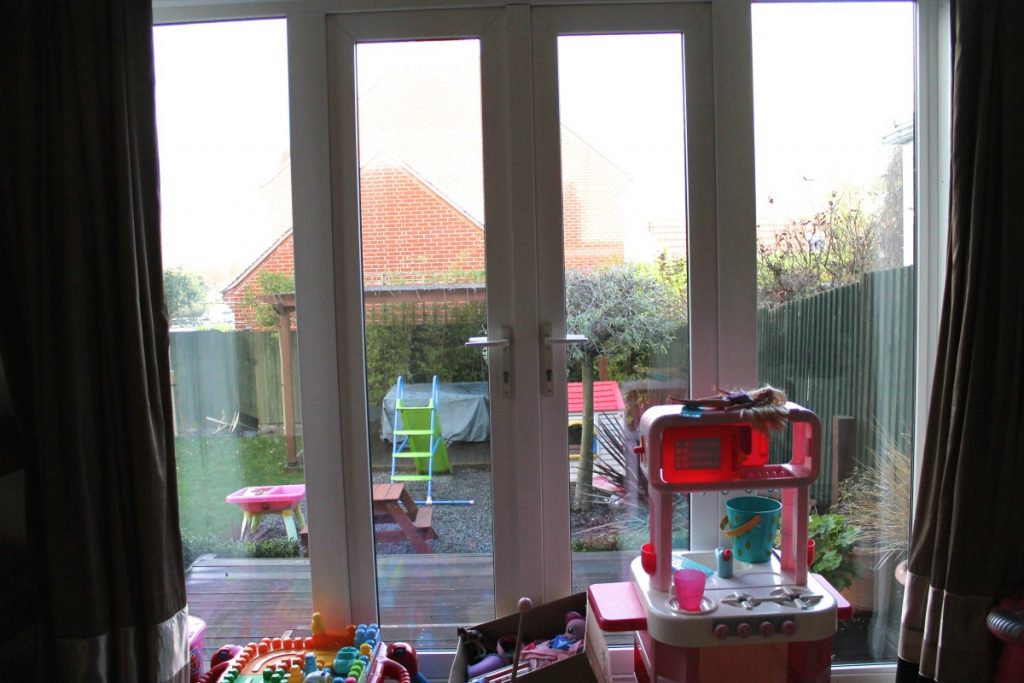 Another view of the back doors – we did wonder about extending out to where you can see the edge of the wooden decking area, but on receiving the quote, we realised this wasn’t going to be possible.

So, there you have it, you can hopefully see why we are looking to replace the kitchen, and this explains a bit too how we plan to change the space into something much more usable for the entire family.

Fingers crossed now that all goes to plan (especially considering we are on holiday for two weeks while the work is going on!)

I hope you enjoyed the quick tour.