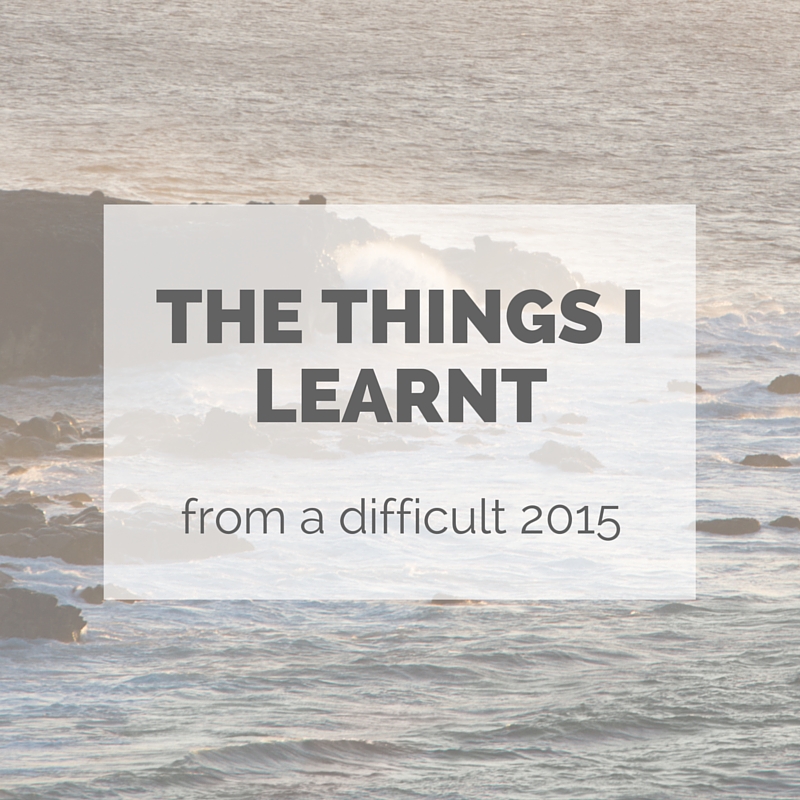 2015 was a pretty tough one for us, but hopefully here are some things I’ve taken and learnt from our experiences.

I’m not saying that we’ve had a hard time in comparison to others who I desperately feel for out there, but it was a tough one in our own little family bubble.

The year started off pretty perfectly, with a fabulous trip to South Africa to visit my brother and sister in law, but then on our return it all took a bit of a turn for the worse really.

And then, the next few months were pretty darned awful.

My wonderful mother in law fell poorly, completely and utterly unexpectedly to the rest of us and I think, to her too. And then, within only six weeks she very sadly passed away with terminal stage four cancer. We were all deeply saddened and in shock really as she was one of the most amazingly strong women I’d ever had the pleasure of knowing, and loving. If you’d like to you can read about it here.

But then, to add insult to injury, whilst all this was happening, our youngest, Ella, had a horrible accident at nursery and ended up in traction in hospital for a month, after badly breaking her femur, which resulted in all manner of investigations by the hospital and medics, social services and even the police. This is her story, here and here.

I don’t know that I want to write about it all again, as I know you’ve all heard it before but if you do choose to read it, or know from the past, you can see what a nightmare the whole situation was, with my mother in law on one floor and Ellaon another in the very same hospital, and my husband and I taking 24 hourly shifts to stay with our little girls, whilst he was also trying to spend as much time as he could with his beloved mum.

And then, after this had all subsided slightly, but only four months later, Ella had another accident and broke the same leg for a second time in only 6 months. Again after the same investigations it was thought to have happened due to her leg being weakened from the previous break and therefore so much more fragile and easily breakable.

This, when then added to other things we’ve had going on within the family, within my friendship group and with work, all spelled out a pretty horrible year.

But, there is nothing we can do to reverse things, we can’t turn back the clocks and change things.

The rest of the year bumbled along ok I suppose, with the latter half of the year so much less eventful than the beginning, but again, it had its moments. The fun times and the less than fun times.

All in all, it’s been a year full of experience and emotion and one that I certainly won’t forget, but one which I want to learn from.

So, here are the things I’ve taken from all this, our own personal little annus horriblus…

Life is for living

This is so true, after all, we only get one shot at life and it’s not a rehearsal as the saying goes. I know that we need to work hard to be able to do some of the nice things in life, but that’s not to say we shouldn’t live each day to the full in the process.

Life isn’t easy. There’s no big guide book or instruction leaflet telling us what to do, how to do it and when it should be done.

It’s about having our own minds and making our own choices. And ultimately deciding what we want to do

And of course, some things won’t come naturally to us. They may even scare us. But as I’ve always said, (though in all honesty, not always followed through with myself) it’s better to regret what you’ve tried, than something you haven’t.

Something may be daunting, but surely only for the first time. After that, it should get much easier, and you never know what wonderfully fantastic opportunities may come your way, with only a few more ‘yes’s’!

Sometimes, it’s by testing and pushing ourselves and from stepping outside that comfort zone, where we really see what we’re capable of.

It’s not only our own life which is short – it is exactly the same for others too. We need to love and acknowledge one another. People are not mind readers. If you love someone, tell them so, as you will regret it if the chance passes you by.

a huge one for me this year. I feel guilt every day that I didn’t show how much I loved my mother in law. I wish I had been able to tell her how important she was to me and how she has been such an important and wonderful part of my life. Yes, we had our moments, but I loved her none the less. In this instance it’s too late, though deep down, I am, sure she knew. But what I can take from this is to tell my friends and family how much they mean to me. To hug them, spend more time with them and to make memories with them.

So tell them so.

Speak your mind a little more

I have never been very good at speaking my mind, especially if it’s through fear of upsetting the apple cart. or go against the grain slightly.

The thing is, that’s hardly an honest way to live is it? For both myself and those around me who I’m not being entirely honest with. If we don’t tell people what we’re thinking, then over time, things can fester and grudges go on unsolved. Its far healthier and happier for us all to say what we mean – within reason – and live honestly and openly, contentedly.

If you don’t know how to do something, learn it!

This one, I’m totally taking from my mother in law. That woman (love her) was a machine!

Seriously there was absolutely nothing she couldn’t do. Because she refused to let anything beat her.

For example, we needed inbuilt wardrobes at our new house, so she studied carpentry and built them for us. We then needed to update our patio and lay steps etc, so she went on a bricklaying course and did the whole lot herself. She has seriously transformed so much of our house.

I remember clearly trying to back out of something (I’m sure, out of sheer laziness!), where I said I didn’t know how to do something, so she just said ‘well go learn it then Steph’.

Now that’s a pretty admirable attitude if ever there was one.

I’m not saying we all have to go on carpentry or bricklaying courses, but what we can take from this is that we are capable of learning so much and doing so much for ourselves. It’s generally our minds which stop us, not our physical abilities.

Be confident in your own abilities

Which leads me nicely on to this next point!

I’ve often doubted my abilities and compared myself to others, and then felt a bit of a failure when they’ve done better than me etc. But generally, the only reason this has happened is because they believed in themselves far more than I did, and in doing so, went on to achieve the things they sought out.

I believe it’s our attitudes and mindsets which prevent us from our dreams, not our abilities. We need to focus on the positives, our competences, skills and proficiencies and nurture these, rather than being bogged down with negativity, which is only harmful and destructive.

I think this year, I want to follow in the footsteps of Claire, and actually have the strength and inner confidence to see myself for perhaps who I really am, rather than what I perceive myself to be.

I’m going to try and make it my year!

If you want something – Go get it!

Though there are a few people out there who seem lucky, where they’ve perhaps had opportunity and success practically knocking their door down, for the great many of us, if we ant something, we need to work hard for it.

And what’s wrong with that. If you see an opportunity, don’t procrastinate until you’re too late and you miss out, go grab it and give it your all.

At the beginning of 2015, partly due to what I’ve just admitted to above, I was having CBT sessions to help me try and overcome some things I was experiencing, which were becoming detrimental to my daily state of mind

And although at the time I didn’t really think I was gaining much from the programme, in hindsight I think it’s really changed me. For the better.

In life we need to accept that everyone is different. Which after all is what makes the world such a diverse and colourful place to be.

But with this, obviously comes differing views and options, of which we all may not agree upon. This is fine. This is something we cannot (or should not) do anything about. After all – we are all free to think as we please.

There are so many things in this world which you personally cannot change, especially if some of those things are attitudes or actions of the people you come into contact with. So, all you can do is learn to deal with them and accept them for who they are. Or the situation.

This is an easy one. No matter how bad we think me might have things, you can pretty much rest assured that there’s someone out there who has it worse. For this I think we need to feel grateful.

I feel grateful for even the smallest of things each day, and it’s through thinking like this, which often puts a smile on my face when I’m feeling a little low.

The tough times bring you together

A huge lesson I learnt from 2015 is just how wonderful people can be when you’re having a tough time.

Whilst Ella was in hospital we were inundated with kindness. From family, from friends and even from strangers.

The world really is a lovely place if we are kind and supportive to one another.